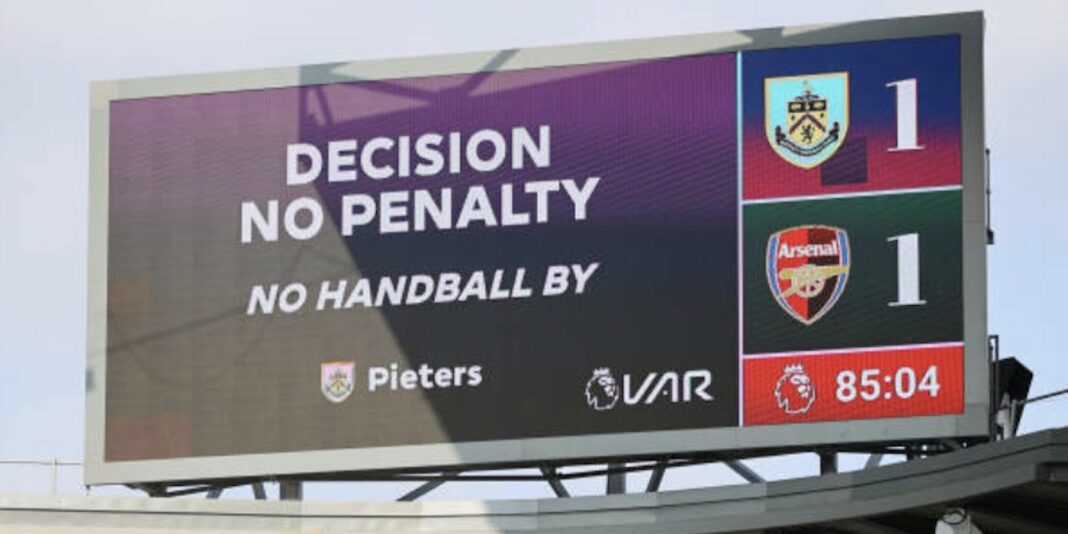 Calum Chambers made his first league appearance of the season slotting in at right-back, perhaps influenced by Pep Guardiola’s decision to start Aymeric Laporte at left-back when Manchester City played away at Burnley a month ago.

Sean Dyche’s side are not blessed with natural pace up-top and so it allows the inclusion of extra height and defensive ability to counter their inevitable style-of-play. Buakyo Saka, Pierre-Emerick Aubameyang and Thomas Partey also returned to the starting line-up. 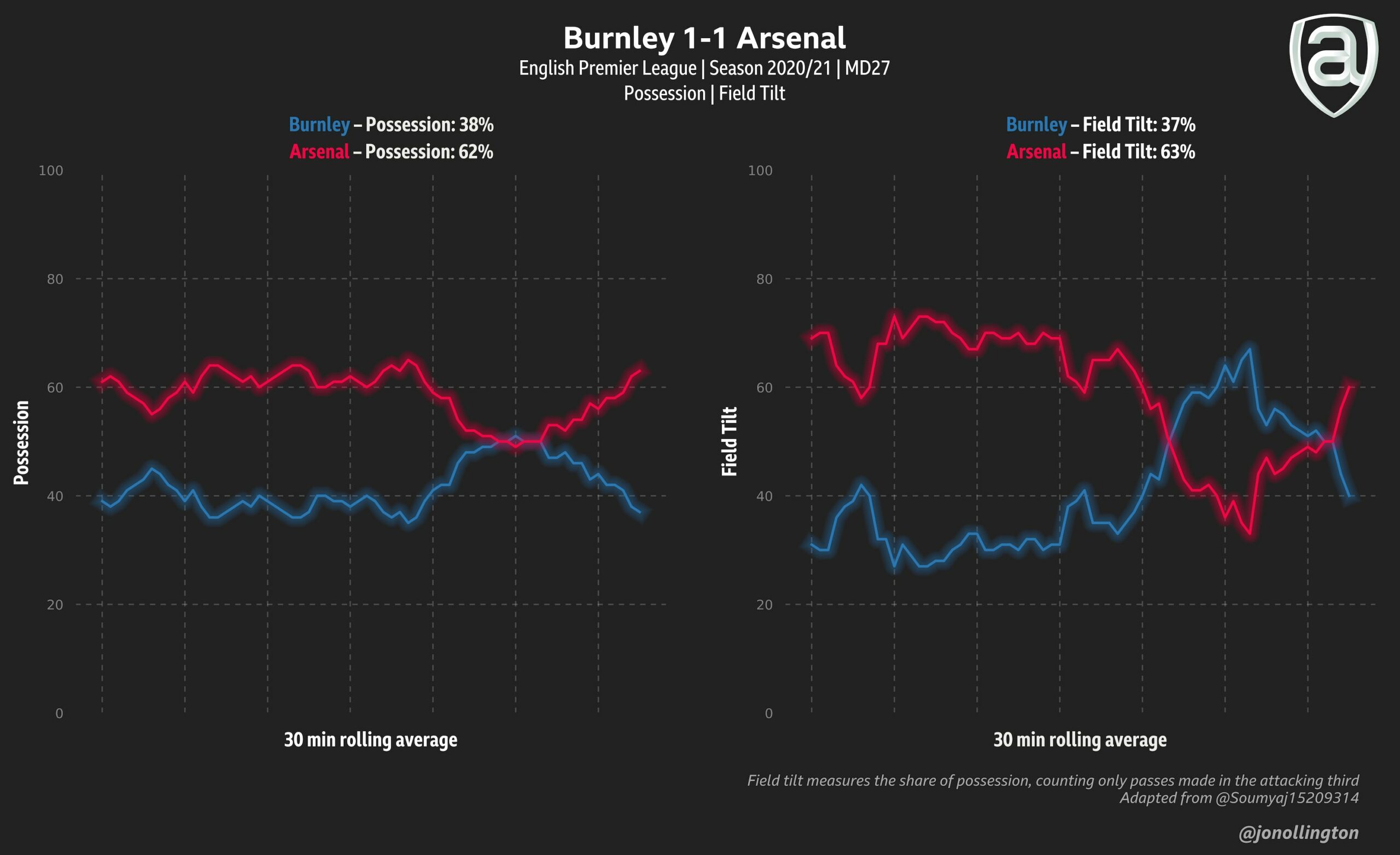 Arsenal dominated possession throughout and of all time spent in the final-third Mikel Arteta’s side amassed 63% Field Tilt – averaging a shot every 6.3 minutes. However Arsenal only found the target with 2 of their 15 shots (13%) as opposed to Burnley’s 5 of 9 (56%) and would go on to rue the 4 Big Chances they missed (Burnley scored 1 of their 2). 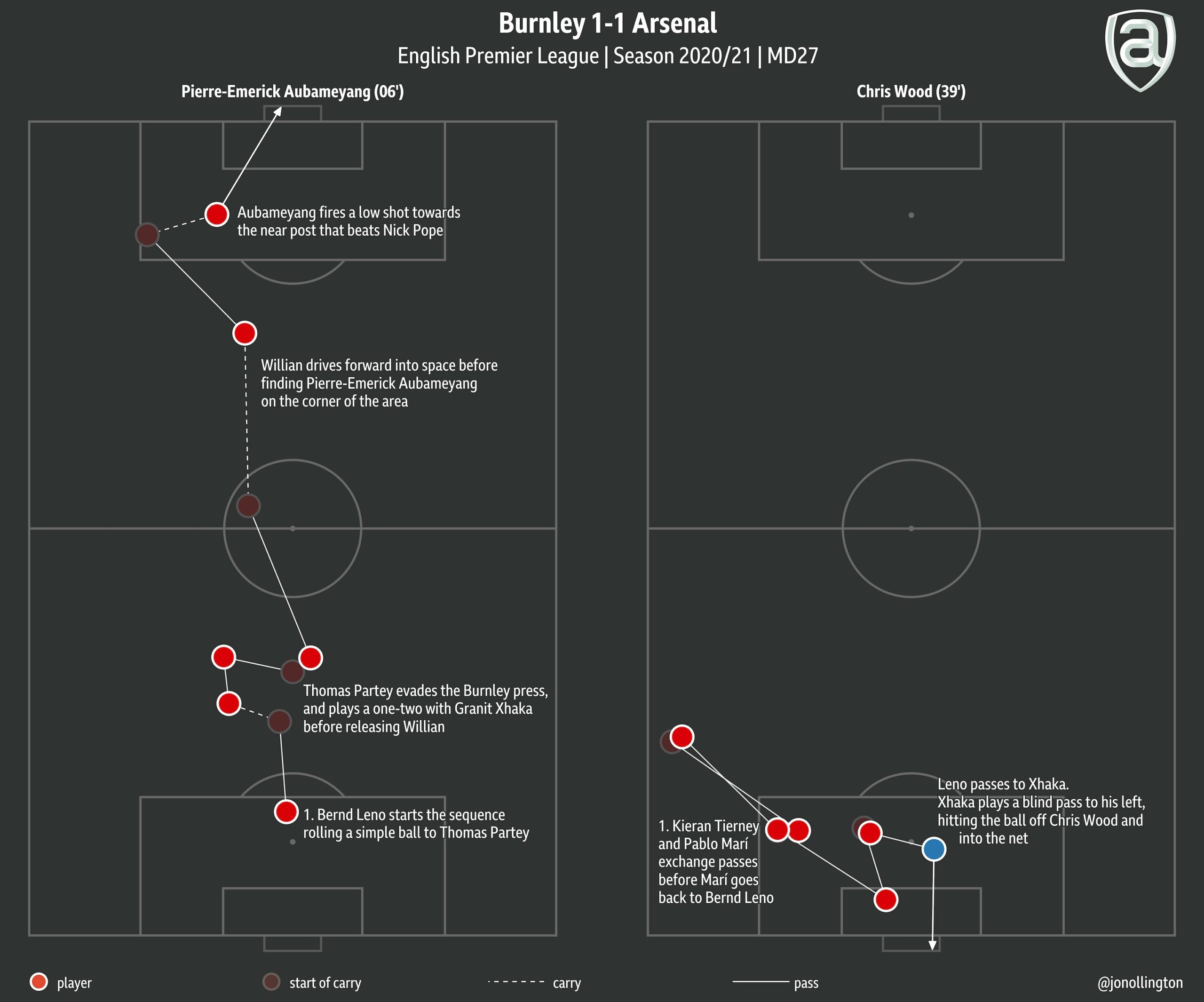 Mikel Arteta has insisted his team play out from the back since being appointed manager in December 2019, and it’s something they’re generally good at. The central defenders split wide and one of the central midfielders normally drops in to advance the possession. Both goals at Turf Moor on Saturday afternoon came from a similar sequence of play as shown above.

Arsenal were superb in the opening 20 minutes and their goal early on epitomised the managers philosophy in playing out from the back. In contrast, what happened for the equaliser highlights the limitations within the squad.

Granit Xhaka demanded the ball from Bernd Leno, stepped into the pass and controlled it with his strong foot before attempting to curl the ball around Burnley’s Chris Wood. The margin for error was small, and the execution was abysmal. 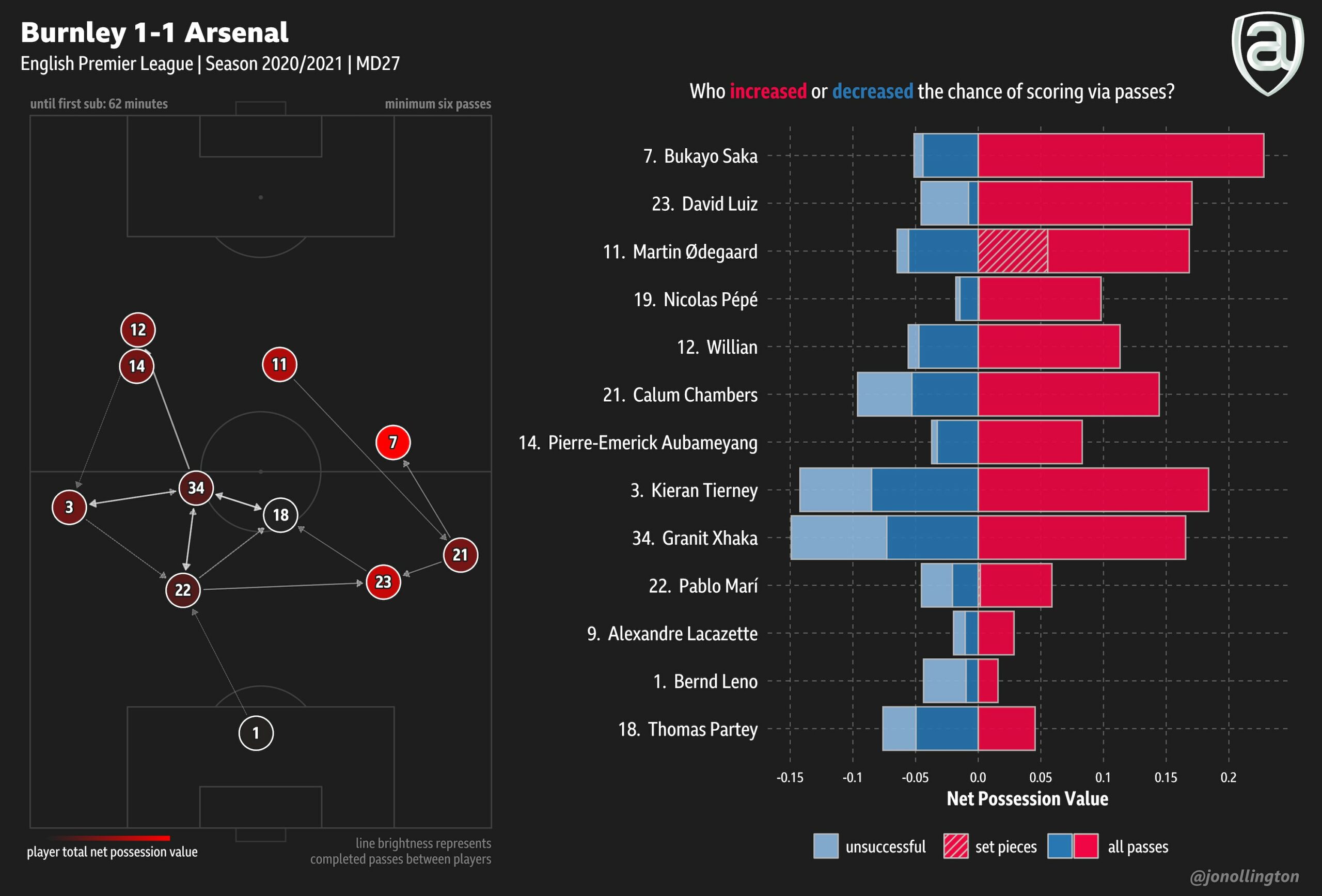 Above is the pass and position network until the first sub at 62 minutes and individual net possession value ratings from Saturday’s Premier League encounter.

Granit Xhaka found a teammate with 76 of his 89 passes (85%), ranking 3rd for completed passes on the day for Arsenal and led Arsenal for Progressive Distance (distance completed passes travel towards the opponents goal), but the mistake that led to the equaliser puts his Net Possession Value at close to zero and, in turn, sums up his Arsenal career to date. There is much to like about the Swiss international and the way he plays football but the perpetual mistakes are never far away and it continually negates everything he does so well. 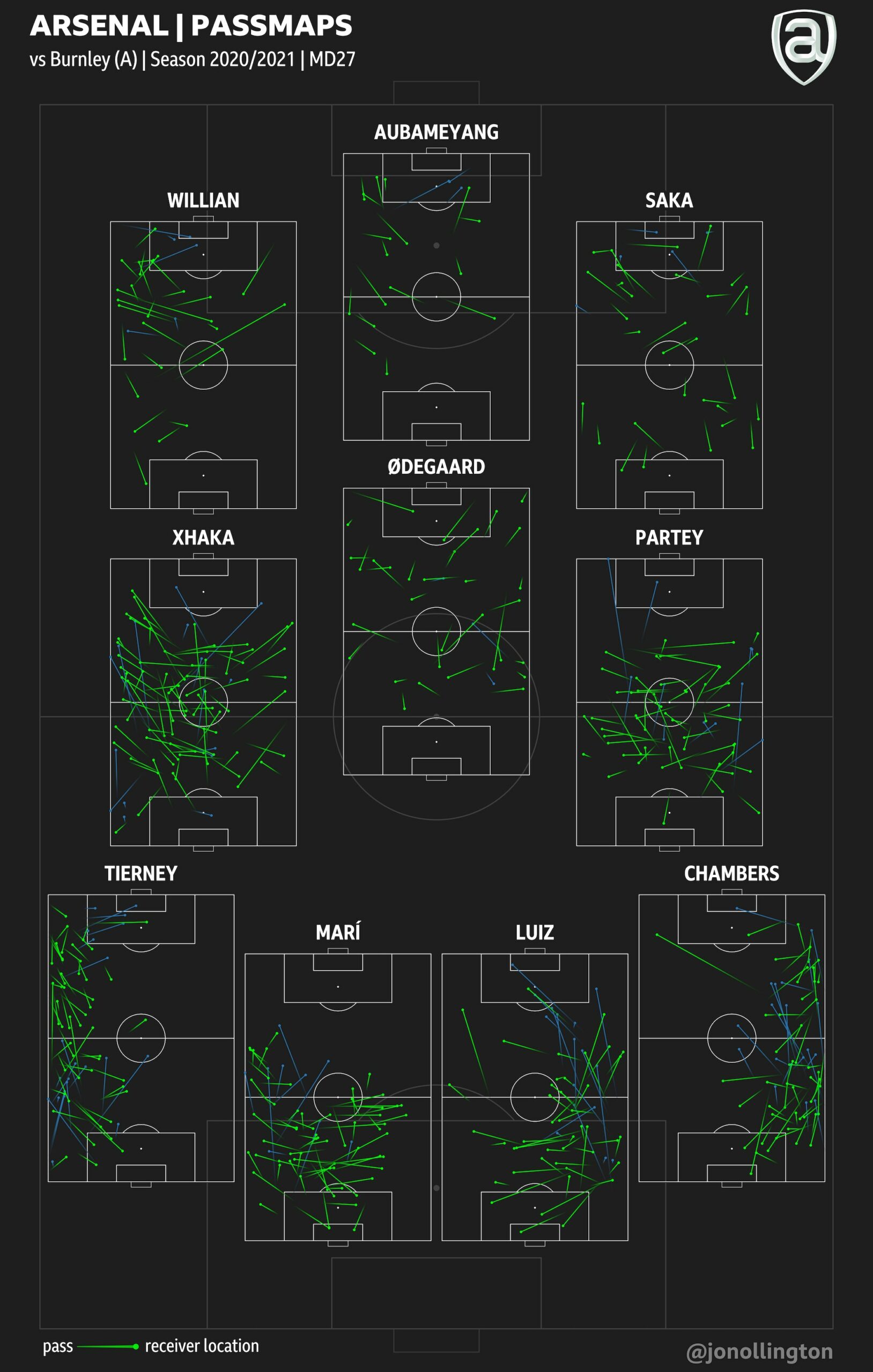 Willian ranked 1st for Passes into the Penalty Area (4), 2nd for Progressive Passes (8) and played the final pass before Aubameyang’s goal. The Brazilian is generally improving and he seems to be working harder than before. It would be useful for this form to continue because he fills a number of squad positions and would provide a viable alternative in terms of creativity with Emile Smith Rowe being injured and Gabriel Martinelli and Nicholas Pepe offering a different profile of player. 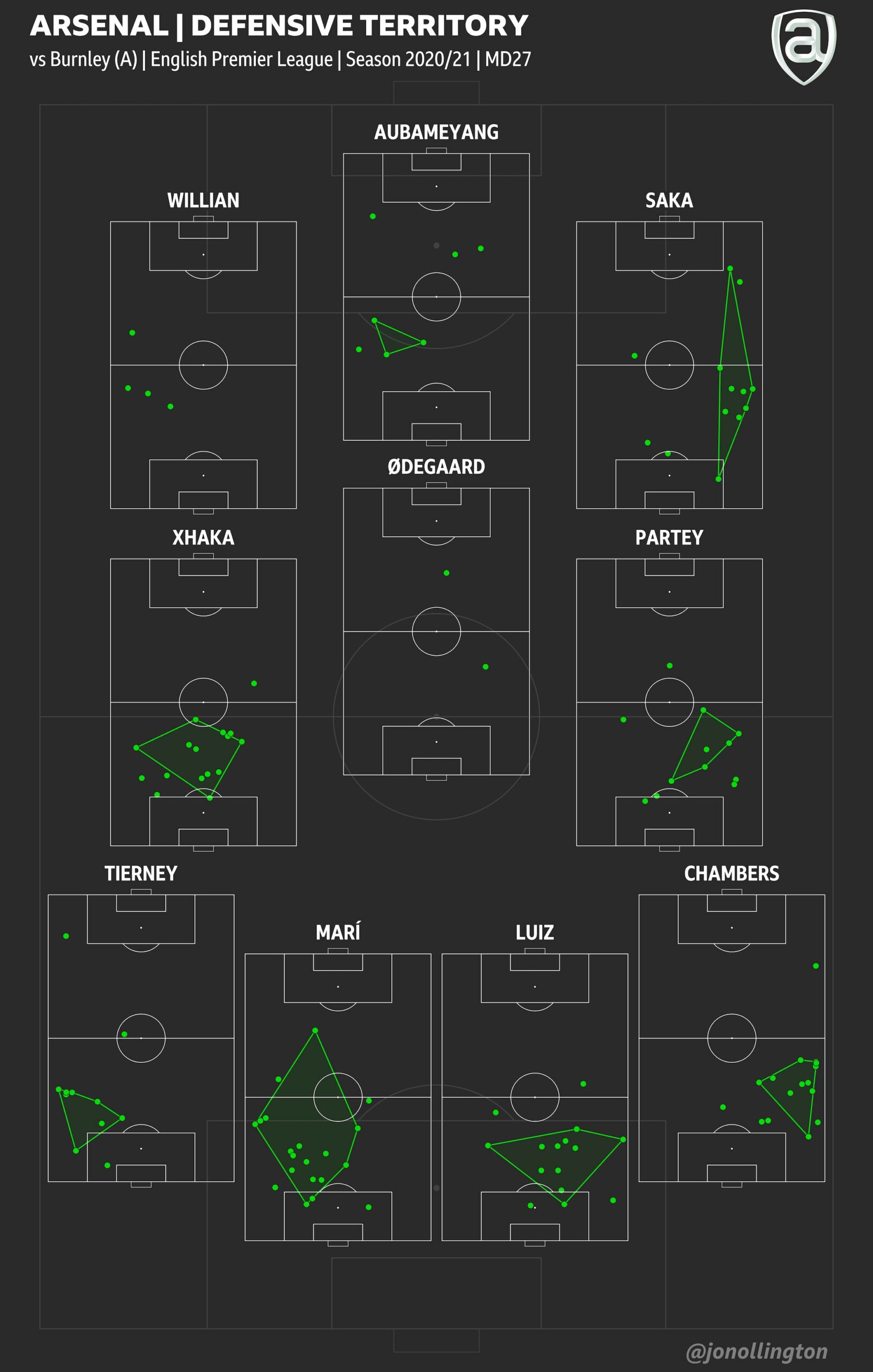 Pablo Mari and Granit Xhaka led Arsenal for tackles won (2) but no one applied more successful pressures than the midfielder (12/19) during a performance where his name was consistently topping every metric: he was also 1st for Mistakes leading to Opposition Goals.

Callum Chambers won 3 of his 5 aerial duels and made 20 recoveries producing the performance his manager expected. 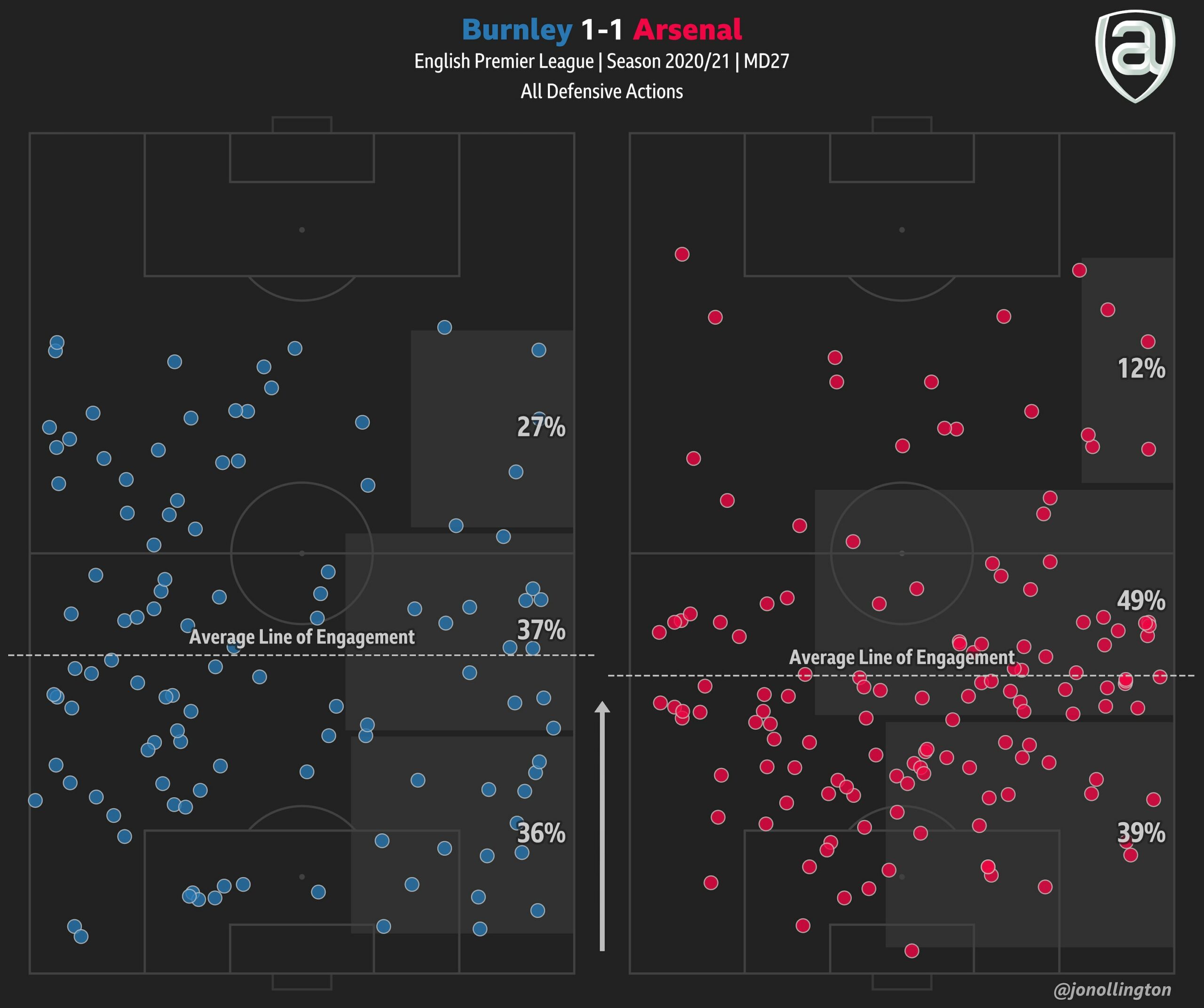 Despite having the better chances throughout, Arsenal’s performance outside of the opening 20 minutes and the final 10 left a lot to be desired. However, Mikel Arteta’s side hit the post, the bar, Bukayo Saka missed a clear cut opportunity in the first half, Pepe missed a sitter in the second half, saw another shot cleared off the line, and was involved during the obvious handball in the area not being given. It just wasn’t Arsenal’s day. The worry is that it’s becoming a bit of a theme.

Burnley 1-1 Arsenal: By the numbers

Slipping down the goals conceded in the PL, now equal 4th with Sp*rs.

On another day we should have won, but that is becoming a regular thing to say eg chucking the match versus Wolves away with the sendings off.

Just more determination to avoid stuff like that would have taken us a lot higher up the table. Hope that can happen sooner than later.

No foot Norbert
Reply to  C.B.

Not with these players I’m afraid. I’m glad arteta is learning with the dross we have because he’ll be much better equipped to deal with better players because of it should the board pull it’s finger out

When/how is he going to get those better players? We made a £50m loss last year, and this one will be even worse after a full season of empty stadiums. Arteta can’t persist with a style of play that doesn’t get results on the basis that “it will work once I get my players” because we’re not a club that can give him a £50m player in each position plus a £200m bench, so if that’s what he needs he’s at the wrong club.

Very good analysis, the way MA is treating Martinelli knowing he is not going to get money to buy players shows how inexperienced he is.

He keeps saying “this isn’t my team” in public, but he needs to make it his team. Moyes is in the Top 4 with Michael Antonio playing as a false 9 – I don’t think Arteta can complain about having three different forwards with top 5 league golden boots, Brazilian internationals, Real Madrid players, £50m midfielders and some of the most talented youngsters in the league. Nobody is saying our squad is good enough to win the league, but top 7 and Europa league semi finals should be the absolute minimum standard in my opinion.

Not having another goalscorer on the pitch is costing him, he is being far too conservative playing Willian over Pepe, it is just not needed against bottom half teams. Apart from that I would argue Arteta is doing his bit. This team is lightyears ahead in every metric since December. Individual errors against Wolves, Villa and Burnley have cost us over 12 points this season. That would put us level with Chelsea in 4th. You can coach all you like, but if you have error-prone players like Xhaka and Luiz, the fine margins of top level sport will not go… Read more »

His choice to keep picking error prone players. How well would a Partey-Ceballos duo work? We just don’t know do we. Why is Luiz starting over Gabriel and/or Holding? Why is Willian playing <full stop>. I mean just look at his recent quotes on Willian compared to Martinelli. Willian: “We’ve seen that in training the last few weeks. He’s rebuilding himself and he’s not accepted the situation. I think he was the player who changed the game against Benfica [BULLSHIT, HE WAS OK – TIERNEY AND SAKA WERE THE GUYS THAT CHANGED THE GAME] in the last few moments when… Read more »

How different these comments would be if the ref had not made a mistake on one of the most clear and obvious handballs I’ve seen since VAR began… Not an excuse. Just an observation. Utter failure from a third party not under Arteta‘a control resulting in the completely opposite narrative. Interesting.

No foot Norbert
Reply to  Awesomesauce25

Had enough time to win this. Focusing on Xhaka’s mistake merely blinds people to the real problems. Between half time and when we finally lobbed in Pepe and Laca was a good 20-25min spell we did nothing. Auba was OK first 20 minutes of game then disappeared. This play out from the back Arteta suicide ball tactic is a problem. Sure it ended in the goal but it is a mistake waiting to happen. I do not see ANY other team (bar Man City) take such risk around our 6 yard box or telegraph our intention so rigidly. Why we… Read more »

Some good points but the thing with xhaka is that he makes 4/5 of these errors every season. We arent good enough to keep giving away cheap goals from cock ups by the likes of xhaka and luiz every 3 or 4 games. Its hard enough to break teams down and get up the table without the same players shooting us in the foot constantly. Im bored of it now Arteta has started clearing out some dead wood but he is also sticking with some players who are no better than mid table or years past their best. We wont… Read more »

It can be easily argued his error lead to the Leicester goal too. He played a poor pass, then did something I thought he was ironing out of his game – rushing to make amends for a turn-over by over pressing the opposition (he should not ever high press because his mobility is so poor he cannot recover). This is exactly what he did, and by pressing after his turn-over he got beaten by a simple 1-2 and Thielemans was away. Sure Elneny could have come across to help, but again it doesn’t happen if Xhaka simply backs off into… Read more »

If Xhaka is such a liability near the goal, why has Arteta made a tactic where Xhaka receiving the ball on the turn by the box is so crucial? It’s Arteta’s job to come up with a way to get this group of players to win, then in summer suggest reasonable ways the playing squad can be improved, not to finish 10th then say “we would have won every game if we had De Bruyne”

His suggestion in the summer was Willian.

Thanks for the breakdown, I like reading these to see what missed the eye test from watching live. Any chance you’d swap the player #s for initials in the pass/position network to make it a little more intuitive?

i do see your point, but the names corresponding to those numbers are immediately to the right of the graphic.

Yes I can see that, and not a big issue, but direct use of the initials is more intuitive than having to cross-match with the adjacent list; removes the extra step. Was just a suggestion dude, the prior author of this visuals column used to do it that way.

The other point is that it is obvious who the players are in most cases, given the structure of the team. A quick check if you aren’t sure on Willian/Auba, but I’m sure most fans know that Auba is number 14.

Though interesting only 4 players have shirt numbers in the traditional 1 to 11, that makes it a bit harder.

With this week’s result, even the most incurable optimist among us should realise that our hopes of going to Europe through the league is over.
EL has to be the focus from now on.

I’m only clinging onto slim hope because we still have to play each of the bottom 5 teams in our remaining 11 fixtures.

Serious question. Did the fact Pepe is a black African have any bearing on the handball decision in this match?

No, the fact that refs are c*nts to Arsenal is what made the difference.