“We’ve tinkered with it in games but we’ve never started with it with a kind of false 9 and Viv in the 10. Birmingham play with a back five so we knew the spaces would be very reduced so we wanted to get Viv in a position to play in the pocket and play vertically and then we could play both sides of Birmingham and just get her peeling away from the defensive line.”

This was Joe Montemurro’s explanation when I asked him about his tactical rejig for the 4-0 win over Birmingham on Sunday. He fielded Vivianne Miedema in a withdrawn role behind Caitlin Foord with Jordan Nobbs and Beth Mead either side. In reality, Miedema often drifts into this space anyway with Foord filling in as a centre-forward, usually from a wide left position. (I analysed their partnership back in October).

Miedema effectively played the role Jill Roord has been playing this season as a 10 who can play with her back to goal but also get into the penalty area and take up dangerous positions off the ball. Roord hasn’t scored in her last six Arsenal appearances now which possibly informed Montemurro’s decision to assess another option. Broadly, it also allowed him to have Miedema, Foord and Nobbs all in the frontline at the same time with van de Donk supporting and with a more traditional style of wide player in Beth Mead.

Playing Foord through the middle also gives Arsenal the chance to go long due to Foord’s ability to hold up play. We see that option utilised here in the opening minutes, Birmingham have clogged up central areas so they would be difficult to play through. Playing Foord and Miedema in this way gave the Gunners two targets to push Birmingham’s backline into their own area.

Williamson floats a ball to Foord here and Miedema immediately makes a run into the area to support the Australian. Miedema’s slightly deeper position has occupied Birmingham midfielder Mollie Green, whose job it was to sit in front of her defence. 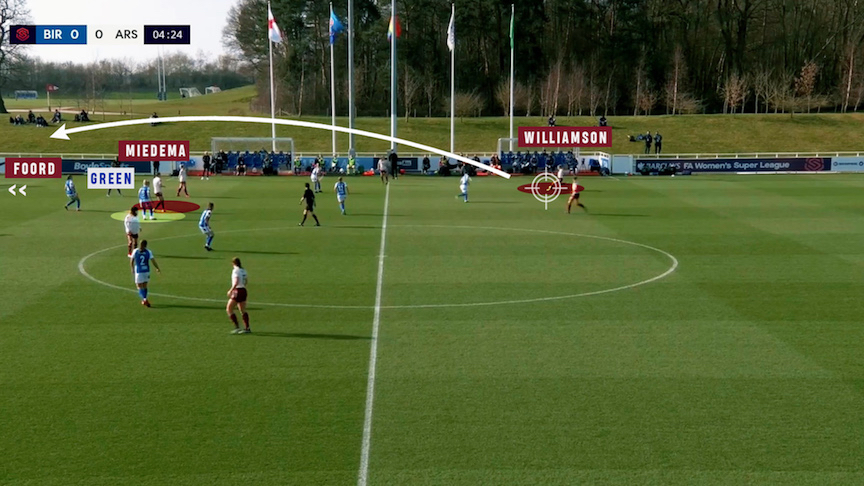 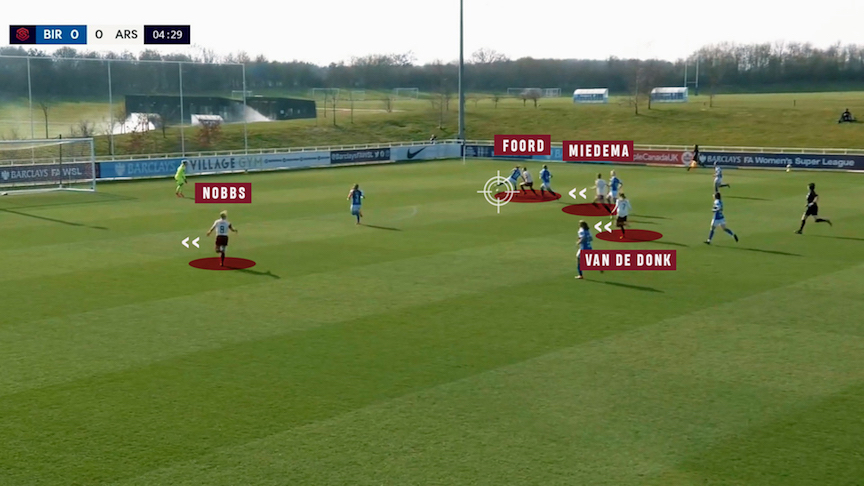 You can also see that van de Donk is making a support run just behind Miedema with Nobbs making a back post run. Foord is tackled on this occasion and Arsenal win a corner but if she had managed to retain the ball (no easy task in this scenario) you can already see Miedema making the near post run, van de Donk the penalty spot run and Nobbs supporting on the back post.

It would’ve given Foord three options for a cross or cut back and given Arsenal good penalty box coverage in the event of a ricochet. With Williamson playing this pass early, Arsenal have taken Birmingham’s midfield, determined to sit in front of their back line, out of the equation.

However, the decision to play Foord further forward wasn’t just about being direct- it just made that a more viable option. Miedema had license to roam and take her marker for a walk. Look at the setup for this throw in. Viv has moved right over to the right hand side, taking Mollie Green with her. That has left a big space for Danielle van de Donk to walk into and Birmingham’s right winger Sarah

Mayling now has a choice between leaving van de Donk free and marking Jordan Nobbs, or else moving inside to mark van de Donk and leaving Nobbs free. You can see that Katie McCabe is also ready to squeeze up in support of Arsenal break. Again, this move doesn’t come to anything but it shows how the team constantly looked to create numerical superiority in attack. 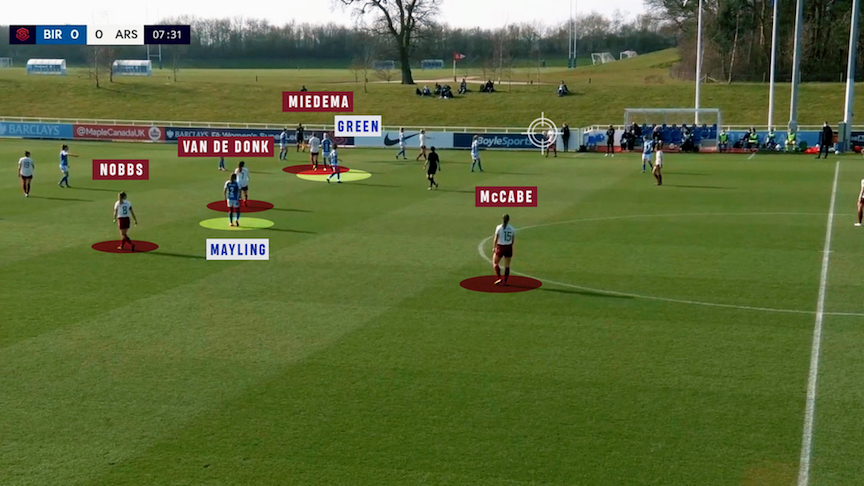 As ever, Mead’s role was to hold the width on the right side of the pitch while Jordan Nobbs supplemented Arsenal’s presence in the box but also had the freedom to move inside and become part of the build-up. One of the reasons Katie McCabe has so many assists this season is because Arsenal’s left-forward, be it Foord or Nobbs, moves in-field more freely creating overlap opportunities on the left, whereas Mead plays much closer to the touchline. Just look at this example in the build-up, where Nobbs takes the ball from Lydia Williams in the centre-circle with Mead right over on the right touchline. 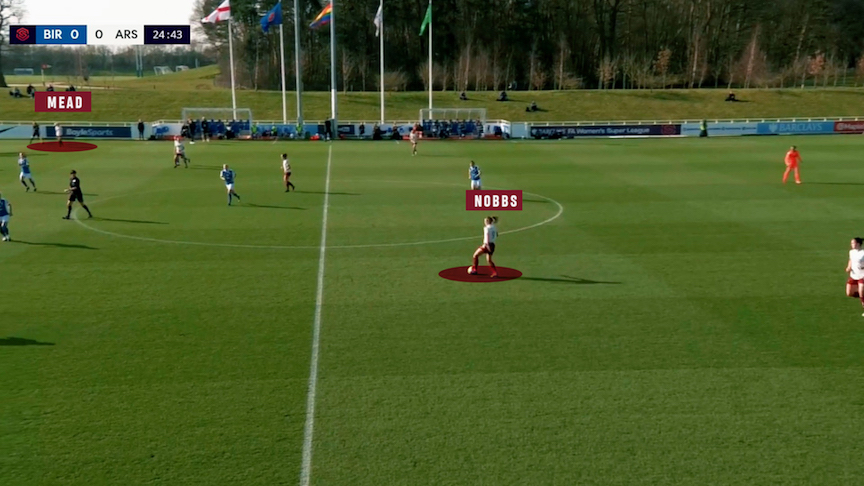 Nobbs moves the ball towards the right in this move and immediately makes a run into the penalty area alongside Vivianne Miedema in anticipation of a cross from Beth Mead. When the ball does eventually come in, it means Arsenal have Miedema, Foord, Nobbs and van de Donk in the area waiting for the delivery. The cross is over hit on this occasion but, sooner or later, the numbers Arsenal are getting into the area will pay off. 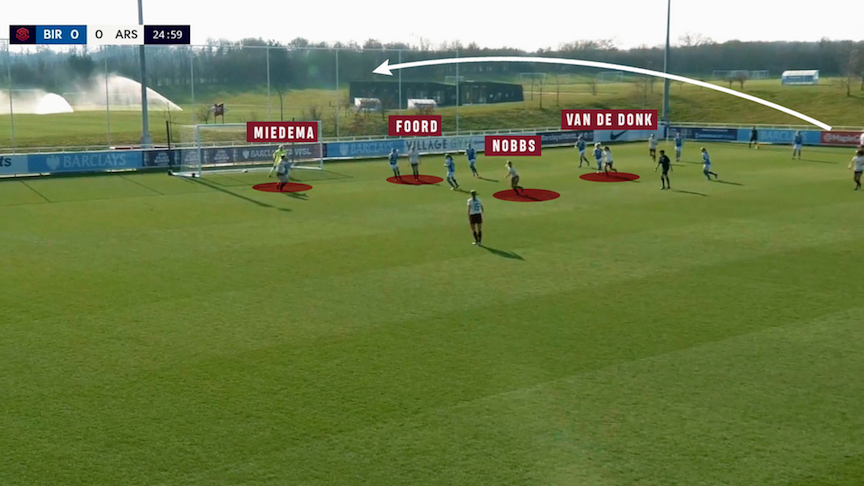 Once again, Leah Williamson’s ability to switch play pays off as she rakes a ball out to Jordan Nobbs on the left. 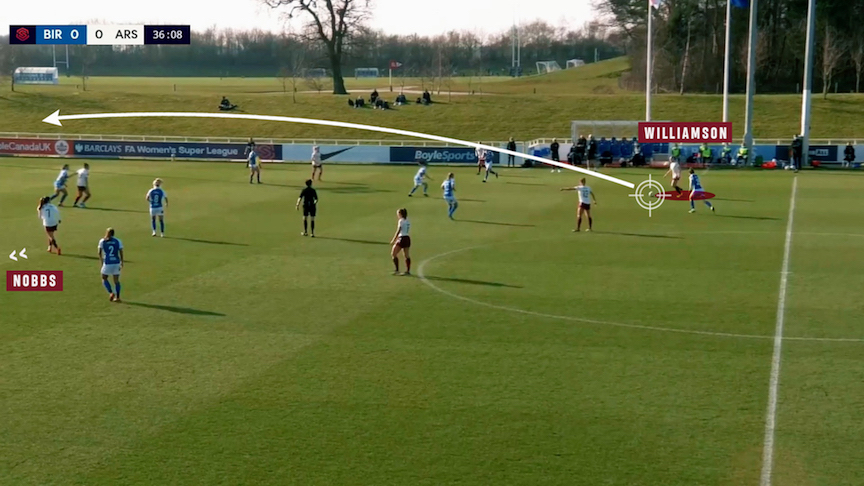 Nobbs controls it and Birmingham right-back Harriett Scott has to rush out to meet her. Jordan hooks a cross into the area and she has Miedema, Foord and van de Donk to aim at. It means she doesn’t have to be too precise and she loops a ball towards the back post for DvD to jump for. 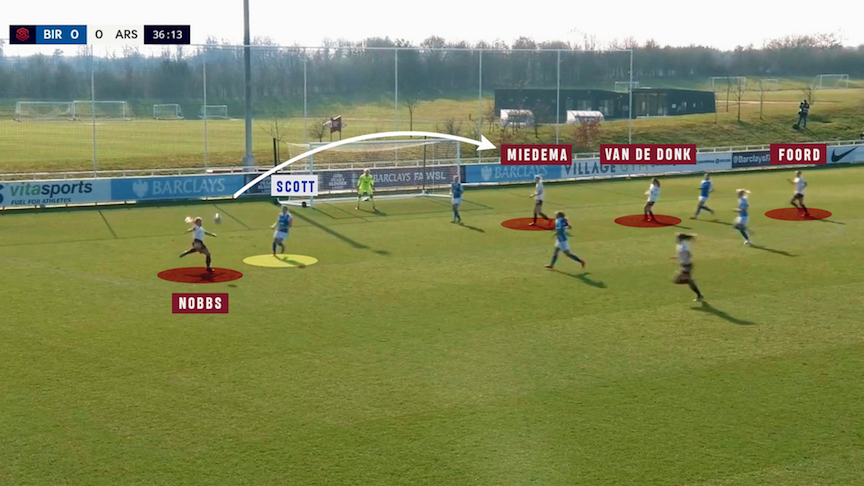 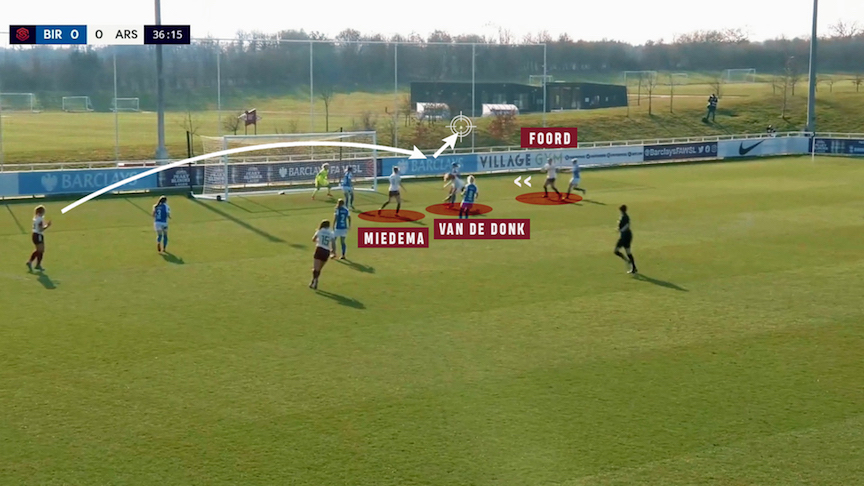 Foord is behind van de Donk and Miedema is ahead of her, if she can get anything on Nobbs’ delivery there is a good chance that it will fall to one of the forwards and that is exactly what happens. DvD doesn’t get a clean header but she prevents Birmingham from clearing the ball and Foord is on hand to scramble the ball home. This has been possible simply because Arsenal have prioritised getting greater numbers into the area and they’ve taken Birmingham’s midfield out of the equation with another quick switch of play. 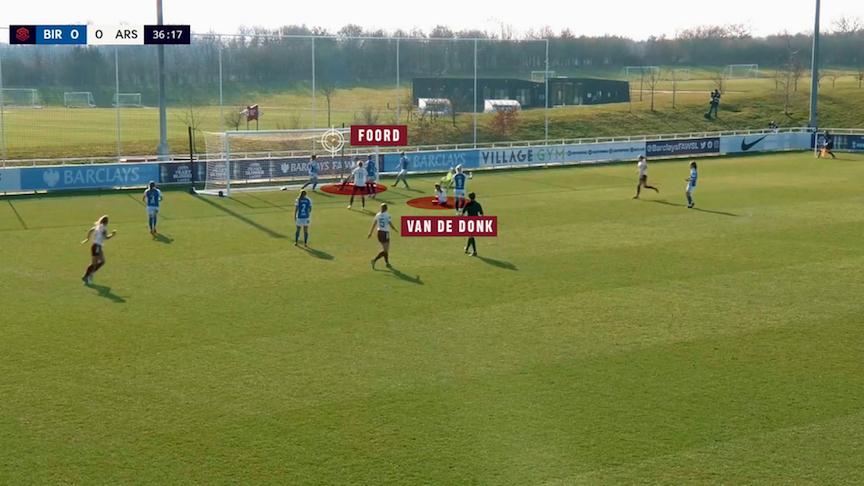 You may recall that Caitlin opened the scoring in the reverse fixture in December with a very similar goal.

Arsenal’s second goal is very similar, again it comes from a direct pass from Leah Williamson, this time into Vivianne Miedema in the number 10 spot. 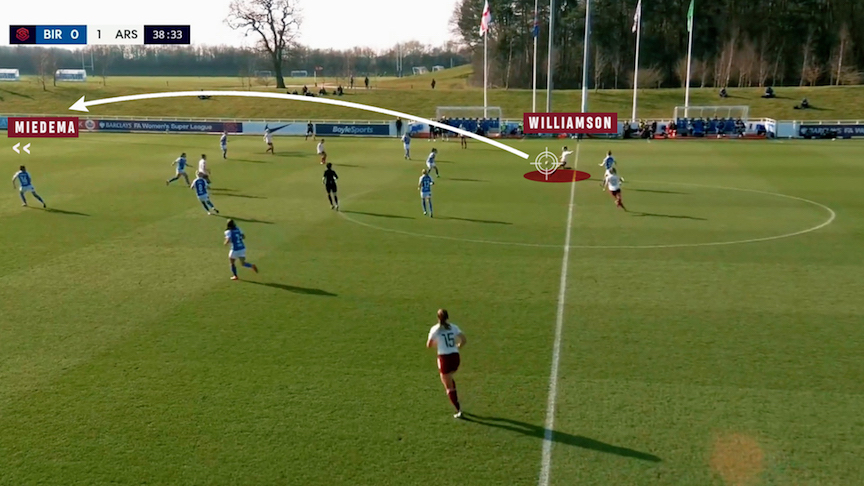 Again, Arsenal have bypassed the Birmingham midfield and Miedema draws two Birmingham defenders towards her. Look at the space Nobbs has at the back post as a result. 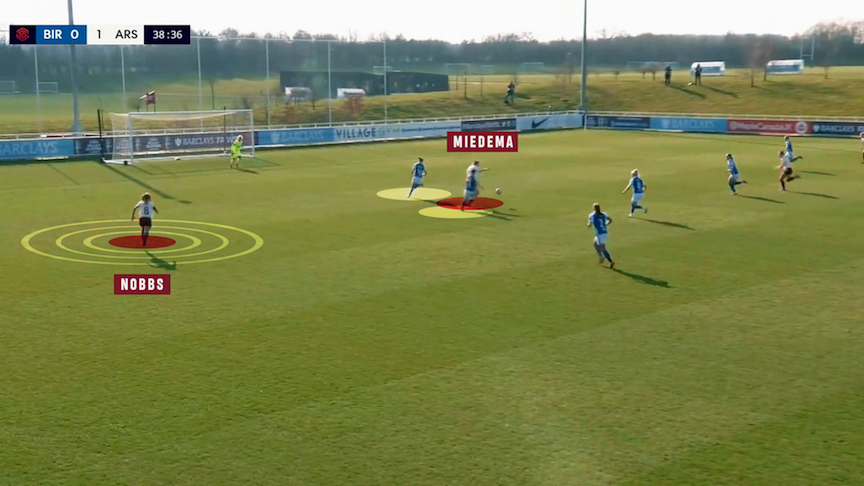 The ball doesn’t quite stick to Miedema but Arsenal eventually scramble it out wide to Mead through force of numbers and then look again at how the Gunners have filled the area. Nobbs on the back post, Miedema on the front and Foord in the centre with van de Donk making a support run at the edge of the area. 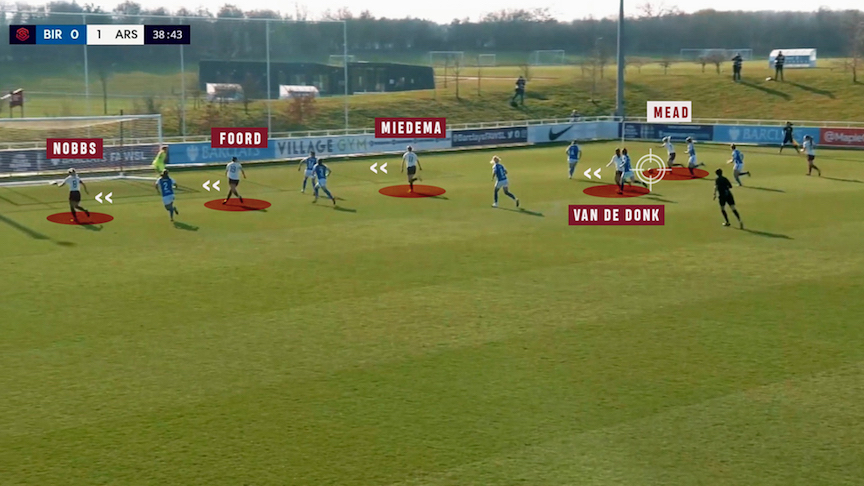 It means when Miedema doesn’t catch her finish cleanly, Foord is on hand to tap the ball into the empty net. 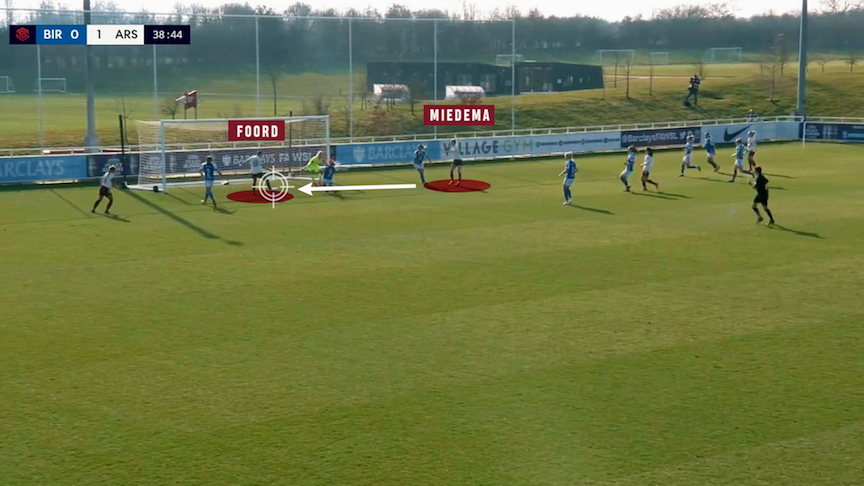 The Miedema Foord partnership has been a positive in a disappointing season thus far. Playing them both centrally on this occasion wasn’t a subtle work of tactical genius, it just meant that Arsenal could afford to be more direct when they needed to be- and Leah Williamson’s ability to pass long certainly helped with that. It also meant they had more bodies in the box when they worked the ball wide. I don’t think we’ll see this tactic deployed in every game but I also don’t think we’ve seen the last of it.

Previous articleBurnley 1-1 Arsenal: By the visuals
Next articleSmith Rowe back in training ahead of Olympiacos trip

Thought actually sticking Caitlin in the middle as a target and letting Viv move aound worked quite well so it makes you wonder why we haven’t tried that before. Not knocking Jill but when she came on and Caitlin left the field the system didn’t seem to work as well.

Yes I don’t think Jill has added much recently, I preferred this I have to say.

This piece really made me understand things better, thanks! I just love the Miedema / Foord combo, and I think it can only get better.

The ladies are doing well

But Prefer Nobbs in midfield and either DvD or Roord on the flank.

Saw the Ned-Ger game and Roord was deployed as an inside forward on the flank. Think she thrives in that role, coming inside or facing the goal, rather than holding up ball/back to goal.