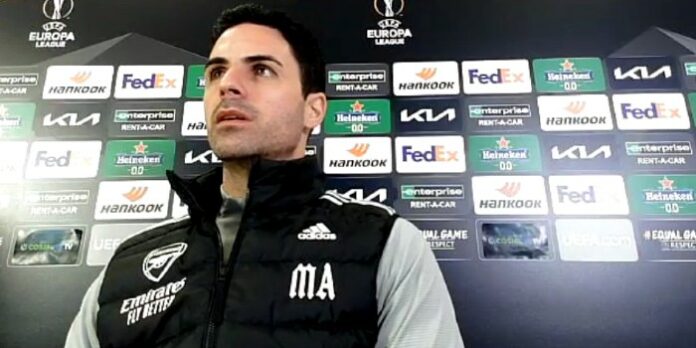 Mikel Arteta has confirmed that Emile Smith Rowe will return to full first team training today as the youngster looks to prove his fitness ahead of tomorrow’s Europa League first-leg clash with Olympiacos in Athens.

The midfielder was substituted off in the 3-1 win over Leicester on 28 March with a muscular problem and sat out the weekend’s 1-1 draw with Burnley on Saturday.

“He’s close to returning,” Arteta said on Wednesday morning. “He’s going to have a full session today to see if he can be involved in tomorrow’s game. After training, we’ll know where we stand with him. ”

The boss has rotated his squad a fair bit in recent weeks so it’s unclear if other players are struggling with an injury or if they’ve simply been rested. We’re still waiting for a formal update from the club’s medical team.

The Gunners face a season-defining week with a North London derby against Spurs sandwiched between the two games with Olympiacos. On the horizon, we also have tough games with in-form West Ham and Liverpool.

“We have a massive week with the next four games that we have in a short period,” noted Arteta.

Good news whether he plays against the Greeks or not.

Anything to get Willian out of the starting lineup. Would love to see Martinelli get some action, but this is probably not the game for it considering how little he has played, that chance was perhaps against Burnley, but alas more Willian it were. Leno Bellerin-Luiz-Mari-Tierney Partey-Ceballos Saka-Odergaard-ESR Auba I’d love to see less of Luiz, but is Holding fit? Wouldn’t mind see the Gabriel-Mari duo in action, although again probably not the time to try it and Arteta certainly won’t so Luiz it is. Also, I’d go with Ceballos-Partey to combat the Olympiakos press – again I’m sure Arteta… Read more »

Willian hasn’t been bad the last couple of games

He was OK against Benfica in the 2nd leg, yet Arteta claims he turned the game. Sorry but that is BS. Tierney and Saka turned the game and saved him and the team.

He was good against Leicester. That makes two good games on the season. He was back to his normal rubbish against Burnley.

Willian has good positioning and he keeps the ball moving, but that is literally it. He doesn’t improve the team at all. He is just a boring, boring option that ensures a close game rather than improving our scoring potential.

Yes, I’m no big fan of Willian but he has turned in better performances of late – and so he should, you may say. If MA and colleagues can get better performances out of him then that must be good for everyone (after all, he isn’t going anywhere anytime soon). Consistency is the key as always and I wouldn’t say he ticks that box yet.

He’s been better than shit Willian but that bar is not high. In no way does Willian’s performances deserve a start over Pepe. I’m solidly backing the manager but the longer he continues to bring Pepe off the bench, the more the seed of doubt grows with the manager that he has some flaws in his thinking. Pepe and Saka are our two most unpredictable players in the final third and have the ability to beat players one on one. Previously I understood why Pepe didn’t play as much as Saka, wasn’t as switched on defensively, wasn’t technically secure on… Read more »

I’d prefer him for the NLD so keep him on the bench on Thursday.

Similar to Benfica (who we just got by) I have big concerns about Xhaka in this fixture. Olympiakos press high and hard and look for turnovers and quick high end attacks. That goes two ways with Xhaka, his offensive influence is negated or he makes mistakes under the press. I’d prefer Dani here. Problem is Dani hasn’t been scintillating either, but I’d like to see the Partey-Ceballos axis get a chance. I think (like all midfielders: Xhaka and Elneny) Partey’s influence will benefit Dani. As for Pepe or ESR, I think this being the away leg, we’ll go with the… Read more »

It would be wonderful if he (Martinelli) did.

I like that 11 but suspect he may go with Elneny.

Please give us som some Martinelli, he is way too talented to spend his time on the bench. I am not saying he needs to start but a player of his potential should always get 20-30 minutes at least.

He’s being protected. He was involved quickly after returning from injury and had another injury scare and had a very emotional reaction to that. Let him be brought forward at the right pace and integrated back into the squad slowly.

Protecting him is one thing. However, the guy has played 209 mins in the last 14 games and one of those he has missed through injury. He has played ZERO minutes in the last 6 games. There is protection and then there is this. He protected Saliba well too.

The comparison to Saliba is unnecessary, they are not connected in any way. Martinelli has demonstrated he can play in the PL, Saliba has not and the manager’s thinking on Saliba has been supported by his performances.

The decision to leave him off the Europa league team list was idiotic. And all reports I’m reading is very strong play, at minimum he is at the level to play Europa and Cups for Arsenal. That’s all most of us expected and wanted from Saliba this season. Instead we Arsenal’d it in.

Arteta is showing a lot of inconsistency with player management. He loves to talk about attitude and playing “his way”, but it is also his job to get the young guys doing that. Simply sending them to the dog house until they say the right things is poor player management and he’s never going to be a guy that develops youth by doing that. He loves Xhaka, Luiz and Willian. These guys have big experience and they know the right things to say to the coach. They clearly train hard and are good personalities. Apparently that is enough with Arteta.… Read more »

Yes, MA’s inexperience is simply a fact, isn’t it. He’s been a manager/head coach for, what, 15 months. He certainly isn’t going to get everything right by any means (and hasn’t) so we’ll just have to hope that he can come through his first full season and build on that learning next season. There is no alternative as far as I can see.

He may be inexperienced as a head coach, but he’s had a very good role model as a head coach at City (one of the best), he’s got a very clear vision of how he wants to play football, and he’s already won two trophies and laid the defensive foundations for success since he took over. Rome wasn’t built in a day but in Arteta, Arsenal have a young coach with all the potential to become a long term success and build a new dynasty like Wenger did.

You read too much into situations, stick with facts.

We still persist with improving this team with the same strategy and options that got us into this situation – overpaid, overrated “experience”.

I am struggling to support Arsenal ATM and find Arteta’s decision making intensely frustrating. I agree with most of what you say.

No need to rush him back for this match with a home leg coming up and with Spuds mashed inbetween then.

Also, I’m a bit tense for this leg tbh. Sokratis smashed it with his video analysis of us. Thanks for sharing that, Blogs. So not only are we playing away, but they will now have the psychological advantage of knowing precisely how we operate.

Leicester game was in 28 Feb, not March :p We haven’t invented time machine, yet

I was just about to post and point out how lucky Arsenal have been with injuries generally this season, but I’m not going to.

We may have had fewer players in total injured for long spells this season (hooray) but the numerous injuries to the likes of Tierney and Partey (hopefully behind them now) have robbed us of a couple of very influential players for many games this season. You can’t have everything though and other clubs have as many or more and have to get on with it.

In fairness, I had completely forgotten about those two.