“Caitlin has a different dimension, she’s a little more explosive, very good at protecting the ball and very good at coming inside, which is probably a different asset to our other wingers,” Joe Montemurro told me after the recent victory over Brighton. Foord certainly has brought a new dimension to the Arsenal attack.

The signings of Noelle Maritz and Steph Catley will eventually allow Lisa Evans and Katie McCabe to be considered wingers as opposed to full-backs. Evans is a very classic wide player, who keeps the width of the pitch, moving inside very late in moves to provide crosses and cut-backs. McCabe can do this too and she can also play as an inverted winger on the right, with license to cut in and shoot on her left foot.

Beth Mead is much more of a traditional wide player nowadays, holding the width of the pitch and looking to commit full-backs by dribbling on the outside. Danielle van de Donk and Jordan Nobbs have also played as wide forwards but with license to drift inside into their more natural number 10 spots.

Foord does something quite different to all of the other wide options. She can play as a number 9 and it shows in some of her more traditional qualities, like her hold-up play and her ability to sniff out crosses in the area. She often operates on the shoulder of the last defender. Caitlin has also played as a full-back and we can see those qualities in her too, with assists from both the left and the right flank this season already. Here are some examples of what Caitlin has brought to the Arsenal attack.

Swapping with Miedema
Miedema is a centre-forward who plays like a number 10 and she loves to come away from the front line to knit moves together. What Foord is able to do is fill that centre-forward space when Miedema drifts towards the midfield. This season we have seen Viv drift to the left flank and Foord run inside of her to keep defences guessing. Look at how many times it happens in the opening minutes against Brighton.

In this example, Wälti breaks forward with the ball and Miedema steps towards the left, with Foord looking to run off the shoulder of the last defender. Danielle van de Donk is also making a supplementary run. The run pushes the Brighton defence back and you can already see the space it has created for Miedema on the left. 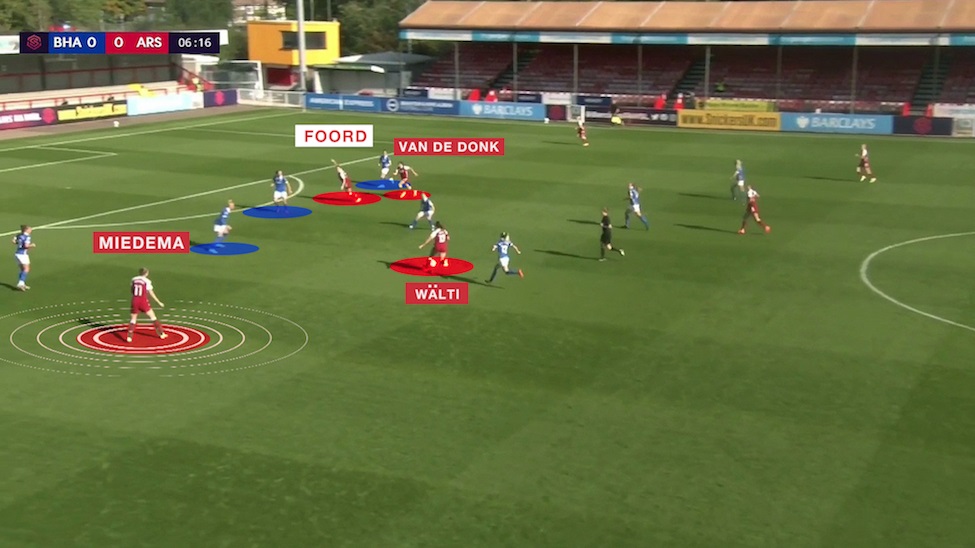 It wasn’t just happening in attacking situations either, look here as Brighton try to build from the back. It is Foord who is in the centre-forward role and Miedema over on the left. 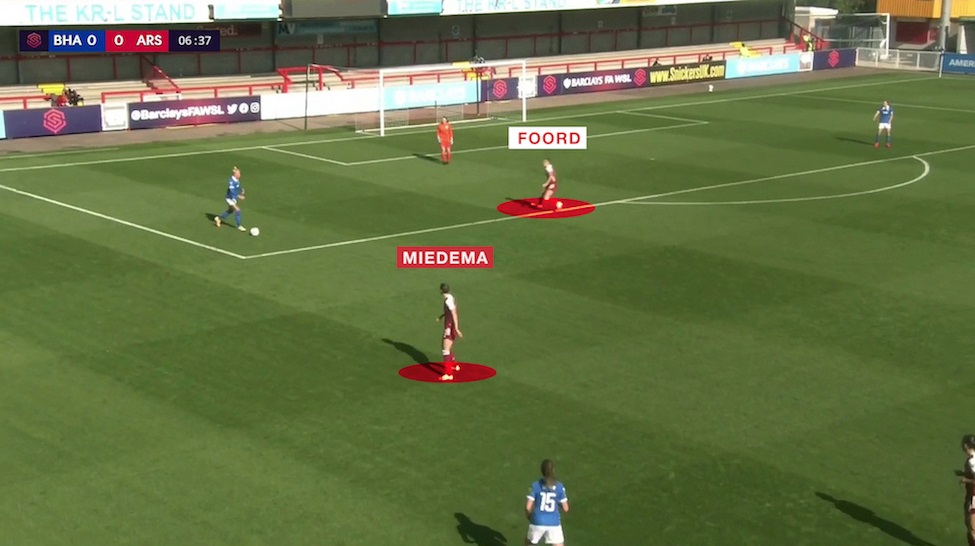 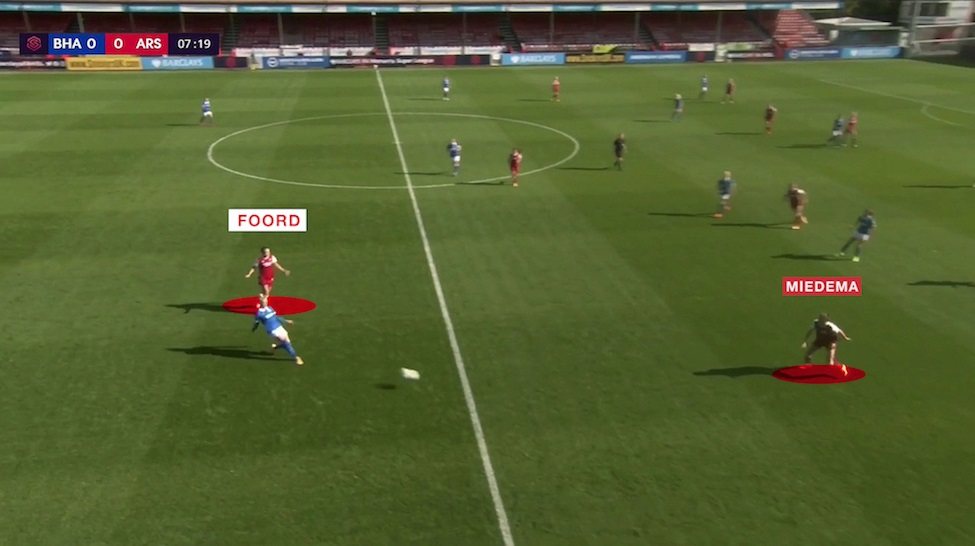 This example follows a couple of minutes later as Arsenal force a transition. Again it’s Miedema on the left-wing and Foord in the central role immediately looking to run in behind. 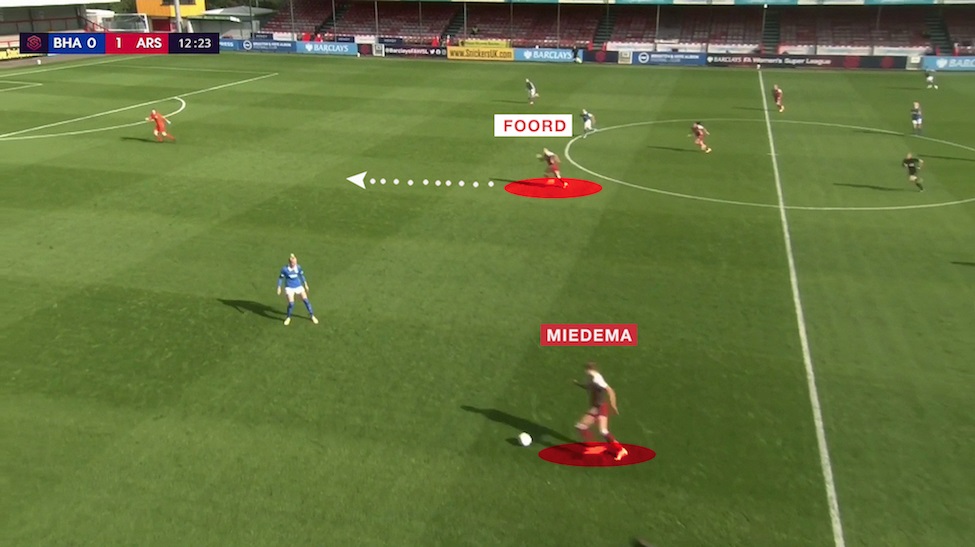 This didn’t just happen in the Brighton match. Around 30 seconds before Caitlin puts Arsenal in front against Bristol City, we again see Miedema wandering over to the left to collect the ball with Foord in the area waiting for the delivery. 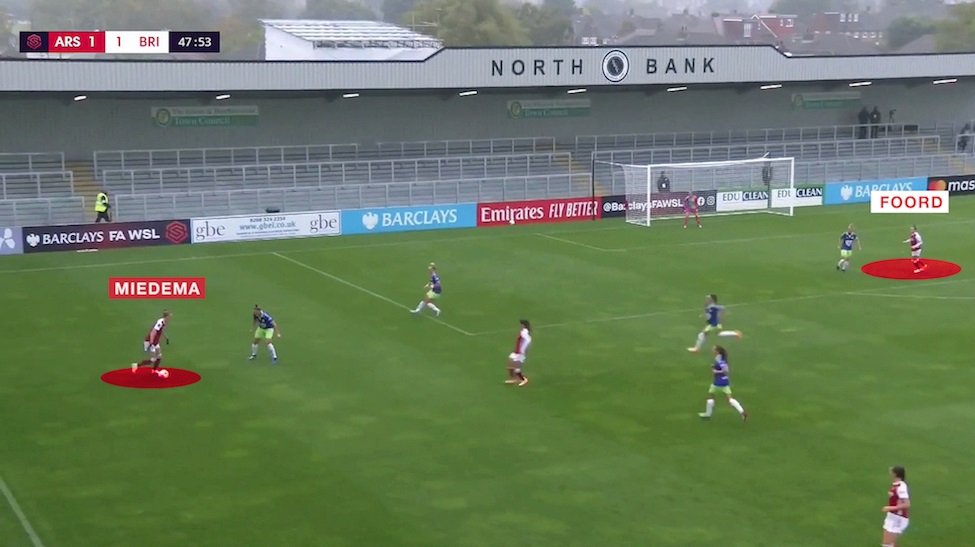 Foord’s goal against West Ham again shows the mutual benefit of this understanding she has formed with Miedema. The Dutch striker drops back towards the centre circle, taking West Ham defenders with her and switches the ball to Evans on the right and Foord is in the striker role to take the gilt-edged opportunity.

Cutting in to shoot
Like Arsenal’s other wide players, Caitlin is comfortable on the left and right flank [more on that anon]. However, she is perhaps more inclined to cut in and shoot- especially on her left foot [McCabe does something similar from the right but hasn’t been able to play there for over a year now due to left-back injuries].

Against Chelsea, Foord scores a peach of a goal by cutting in from the left. In the first frame you can see that the Gunners have played through Chelsea’s press and the defence looks stretched. Look at how Noelle Maritz is also bursting down the left to support Foord. 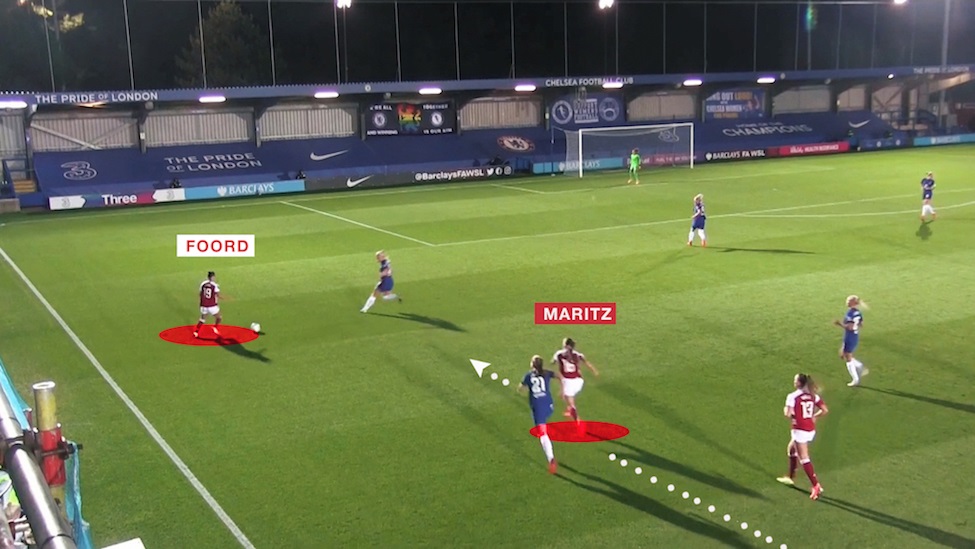 Maritz’s run prevents Thorisdottir from properly closing Foord down and it gives her the space to shoot- an invitation she takes up with an excellent curling shot. 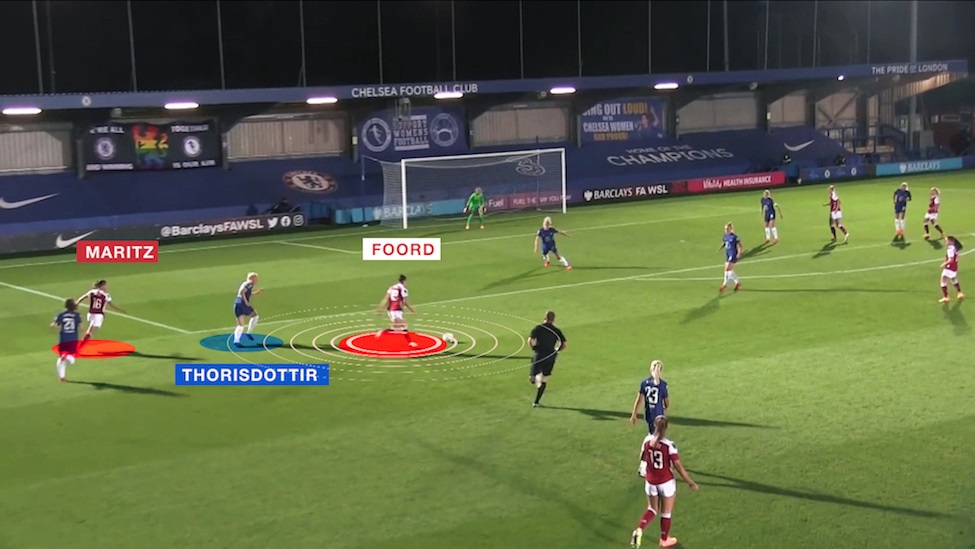 Foord almost scored an identical goal against Reading on the opening day of the season. Again, Maritz is sprinting up the field to provide a decoy run, allowing Caitlin the option of either finding her on the overlap or cutting in and shooting. 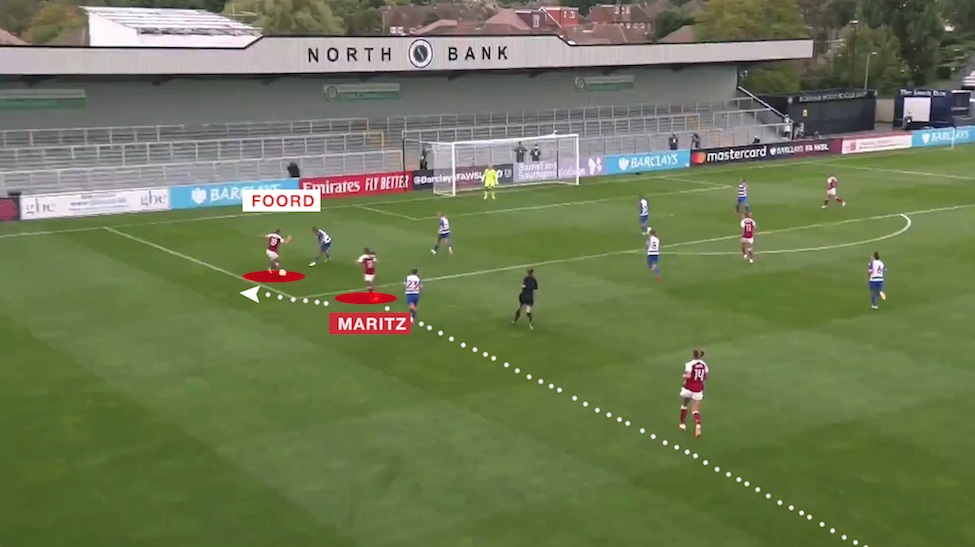 She elects to shoot with exactly the same side footed action towards the far top corner, but on this occasion, the ball hits the roof of the net. 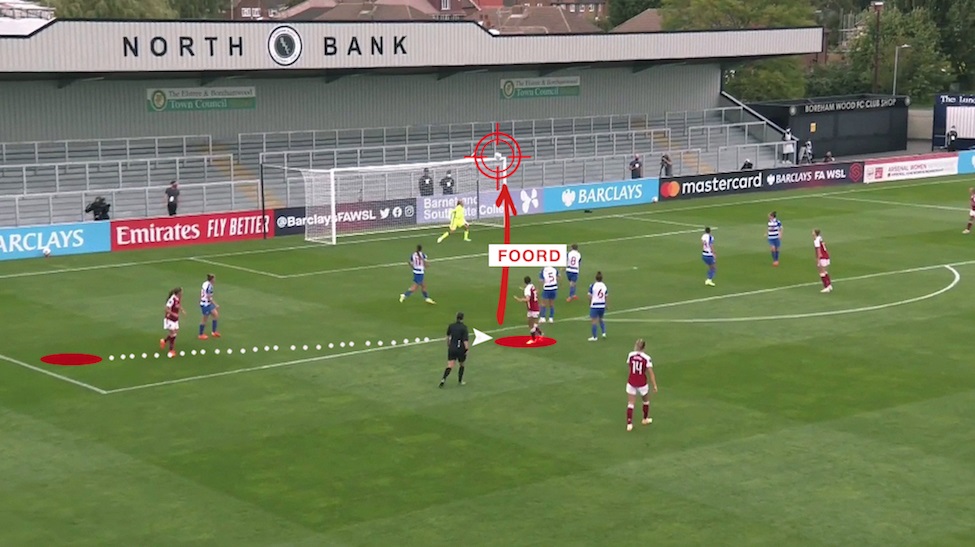 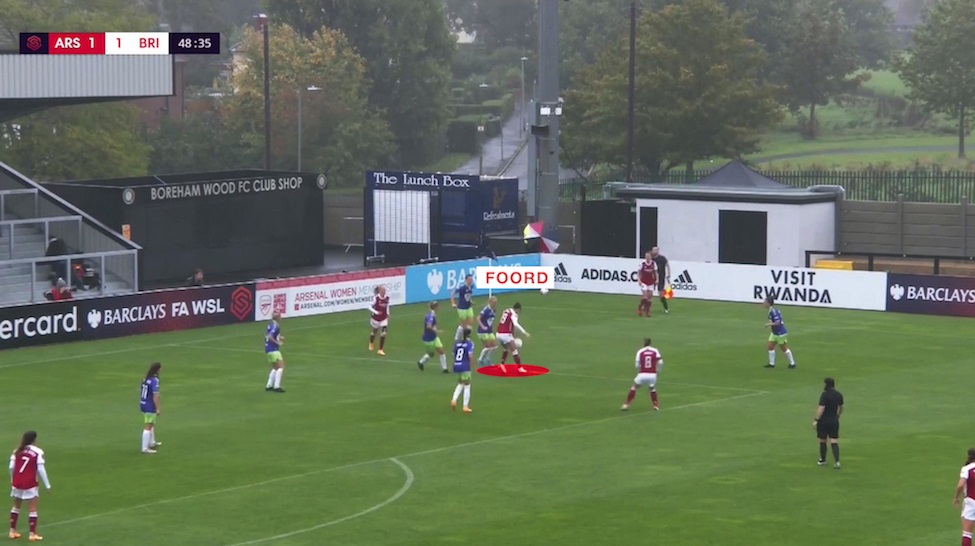 Arsenal build again and 24 seconds later, she is in the six-yard box to latch onto Jordan Nobbs’ cross with a proper striker’s goal. 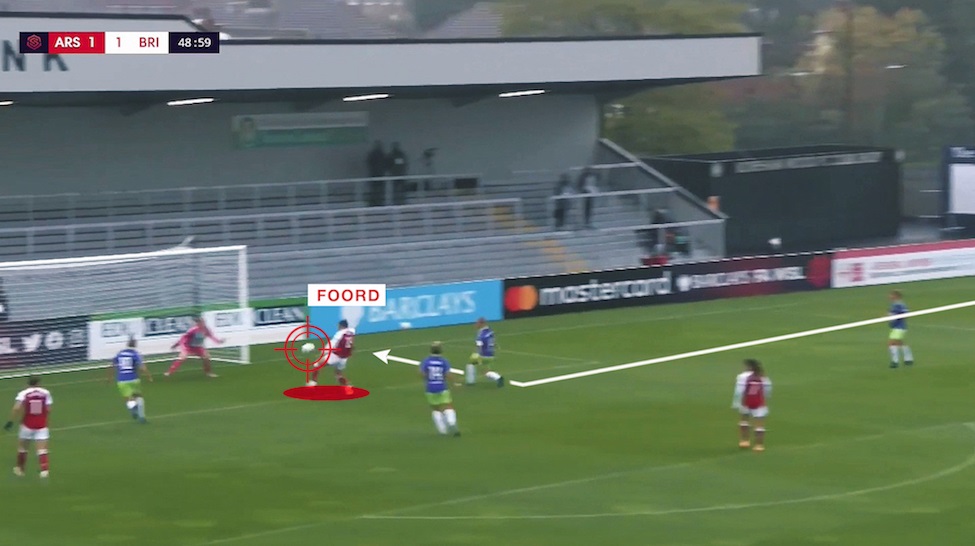 She nearly opens the scoring in the FA Cup tie against Spurs too with a trademark centre-forward effort, attacking a cross from the right and competing for an aerial ball. Caitlin is unlucky to see the ball rebound off the crossbar on this occasion.

? Early chance! ?@CaitlinFoord is so close to putting @ArsenalWFC ahead

Montemurro highlighted Foord’s ability to protect the ball and there are few better examples than her assist for Miedema against Reading. With defenders at her back, she holds off the attention of the Royal defenders before finding Miedema in-field.

Playing as a second striker creates nuisance value off the ball too. Look at the shape of the Arsenal attack for Nobbs’ goal against Manchester City. Her and Miedema are positioned like an old-fashioned front two. Their presence prevents City’s defence from moving away from the edge of the area to charge Jordan down. This gives her a crucial half-second to line up her shot and Nobbs makes no mistake. 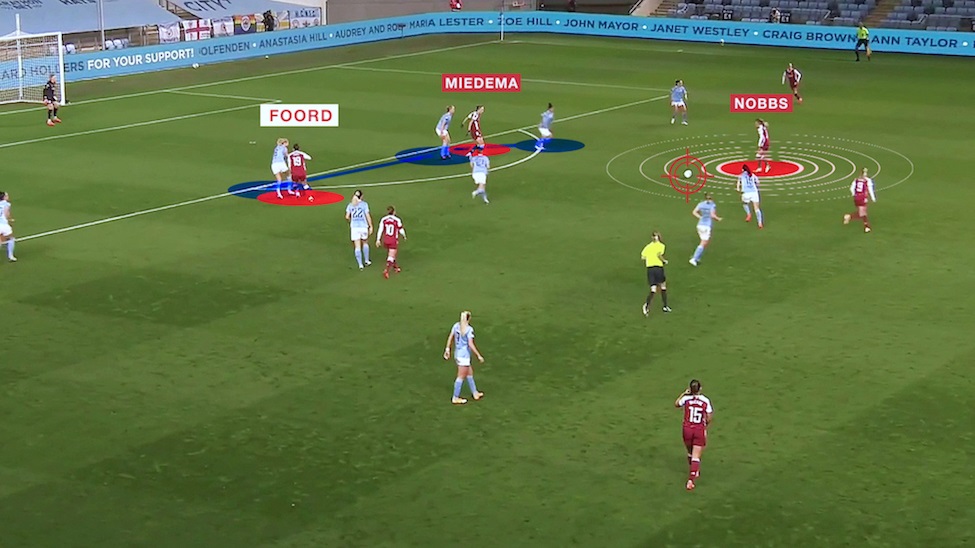 Wide play
For all of her qualities holding the ball up, playing as a second striker and cutting in to shoot on her right foot, Foord has the qualities of a traditional wide player too. Against Brighton, she isolates Gibbons at left-back on the right-hand side, beating her with a mixture of power and skill, before finding van de Donk with the cut back. It’s the purest form of wing play.

Against Bristol City, she produces an assist for Nobbs, from the left this time. Foord cleverly holds her run on the left touchline, her striking instincts allowing her to time her run off the shoulder of the Bristol right-back perfectly. She has the presence of mind to look up and cut the ball back on her weaker left-foot to find Nobbs arriving in the area.

Overall
Caitlin has provided end-product from centre-forward, the left wing and the right-wing already this season. Her attributes are simultaneously very suited to Montemurro’s vision of a fluid attack, however, she adds some different qualities to the mix too. Her partnership with Vivianne Miedema is already blossoming with Miedema, the striker who likes to drop deep and Foord, the wide forward who likes to play as a striker. The Australian has already added a new dimension to the Gunners forward line.

Previous articleArteta: We’ll get better playing out from the back
Next articleArteta acknowledges his big squad is both a blessing and a curse

Impressive player. Good analysis. Not having all the focus on Miedema in attack really improves the team.
This Foord is a Mustang.

This site really has an Arsenal of puns these days!

Viv always gets the plaudits she deserves but Caitlin’s 4 goals and 5 assists in 5 games are not to be sniffed at. In fact, Katie and Meado both have 5 assists as well as the Gunners having the top 3 WSL scorers so far this season. Looking good at the moment.

Thanks Tim. I have always been a Vauxhall man but Caitlin is converting me! 🙂
A very shrewd, under the radar signing last winter that is having positive results already by providing alternative striking options.

Very good piece Tim! Caitlin has been really impressive this season. Her endproduct is so good, specially given that she wasn’t a starter at the beginning of the season. In the attack the “second striker” position seemed always be where we could improve the most, because Viv is Viv and creates so much for others and her movement means more room for others around her. This year we have used it with Jill and Caitlin better than before. If we get some of our injured players back, it will be interesting to see Caitlin give some rest to Viv also.… Read more »

I met her yesterday for a photo shoot. Have to say she was very down to earth and very friendly. Good rapport with the other players and has settled in well.

Awesome analysis! When she came in I thought of her as ‘just’ someone who could play both wide (when Viv plays) and as a central striker so that Viv could sometimes be rested. I had not expected her to offer so much extra when both she and Viv are on the pitch, but you’re right, she totally does add that extra threat by dropping in as second striker when Viv drops deep. Also, shoutout for the graphics!!

And she works her arse off. One of our most unselfish players.
I totally underestimated her when she first arrived, but no longer. Another cracking signing by AWFC.

Great team player nice person too. Had chance to meet her after her debut game, very humble. That lay-off for Viv’s 3rd last Sunday sums her up.