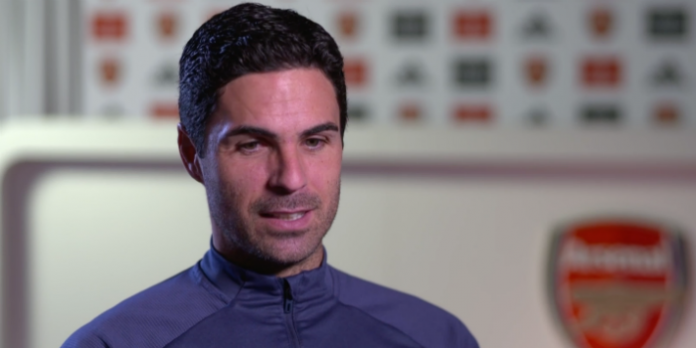 Mikel Arteta admits it’s not easy leaving so many players at home for Premier League matchdays but he’s well aware that having a big squad may be vital this season given the current climate.

Premier League clubs rejected the opportunity to retain the five substitution rule that came into play post-lockdown last season and squads for domestic games are subsequently capped at 18 players.

Despite it being difficult to leave out players – something he faces doing every few days with 17 senior non-homegrown players on the books and a host of youngsters at his disposal – the boss knows a Covid-19 breakout in the camp would quickly ravage his options.

“Yes, we have a big squad,” he told Arsenal Digital ahead of Sunday’s game with Leicester City.

“I think most of the teams do have this season because I think we have to bear in mind with the coronavirus situation that things can change really quickly and you have to be able to have the numbers to compete in the different competitions.

“With the Premier League rules allowing you to just take 18 players, it’s a headache and it hurts to all the time leave four or five players out of the squad as well. So we have to try to manage that as good as we can.”

It’s still unclear who is and isn’t available for selection when the Foxes come to town. Having missed last night’s Europa League win over Rapid Vienna, Dani Ceballos and Willian are doubts. The Gunners will also be without Rob Holding.

“We have to assess a few players today,” said Arteta on Friday. “We have some knocks and niggles from last night which is normal and after a long flight as well. Let’s see how everybody is today.”

On Willian and Ceballos, he added: “They haven’t trained with us yet, so we’ll have to see how they react in the next couple of days.”

Arteta is expecting a tough game with Leicester; a team he’s already faced a couple of times since July. The Gunners drew 1-1 at the Emirates in the league towards the tail-end of last season and beat the Rodgers’ men 2-0 at the King Power in September in the League Cup.

“I think Brendan and his team have done a great job. They dramatically changed the philosophy and the way of playing, since they arrived and I think they had an incredible season last season.

“This season, ups and downs, like almost every team in the Premier League and some incredible results, like when they played against City.

“They can adapt and play different ways and sometimes they are really dominant, sometimes they can defend with a low block but overall they’re a really, really good team.”

A big squad filled with quality is only a blessing.

Wenger said the other day, we now have quantity and quality and investment into players has been good in the last few years. Arteta has to deliver top four.

A lot to ask don’t you think? he’s only been here a year.

I think “has to” is a little strong. A more natural progression would be top six this season with a good Europa Cup run and then we push hard the season after.

Don’t forget that our rivals all strengthened too. Especially the likes of Chelsea that spent really big. It’s a big pack of Leicester, Wolves, Chelsea, Tottenham and United to burst through.

I’m keeping expectations managed but am full of hope. It feels like the first season in a long time that I’m not feeling almost immediate low level anxiety about.

Nope, top four is the only thing acceptable. Emery took us to Europa League final and top five in his first year. You’re now suggesting a good run in Europa League (I guess quaterfinals and top 6). Where is the natural progression?

You too should appreciate what Emery achieved. He is laughed at every day by fans. I am satisfied with Arteta but same rules apply to all.

I did too until it all went completely tits up the following season.

I actually thought 5th and a Europa cup final, in the grand scheme of things, was a pretty good return.

Let’s give Arteta the same patience in his first full season.

Went tits up at the end of his first season. The Palace game was the beginning of the end for him. Competition a lot fiercer now then at that time when Leicester, Everton and Wolves were much less of a consideration. Also id say this current squad are only now getting back to what that one had been having then lost Monreal Kos and Ramsey. This squad has a fourth place finish in it though so anything below will be disappointing from the group, but it would also be the manner of what happens. Plus ‘has to’? its a condensed… Read more »

I agree about not expecting too much this season. I’ve said on this site before that, realistically, an automatic Europa League place – hopefully 5th – and possibly a cup of some sort is what we should aim for – anything extra will be a bonus of course. Although results have been all over the place recently, I don’t think it will be a surprise to see the “usual suspects” in the CL positions come Christmas. That leaves several teams, including us hopefully, challenging for the other European places.

Both you and HC are right, in your own way. We have to win the Europa League. Top4 may not happen, and that is as much down to an awkward transition (remember it was actually Emery who was the manager for the first hour yesterday?) as to the opposition strengthening.

Top 6 would be acceptable in the league, but only when you consider the current results. There seems to be no specific trend for any team as such. Everybody is losing and winning with abandon.

Well, Wenger spent quite a lot during his time and I don’t recall that the squad was particularly small in his day either. A little bit of revisionary history from Mr W? Back to the present, Arteta is no fool so he almost certainly won’t have agreed with the owners that a top 4 finish is the target this season. The sensible option would be to go for an automatic Europa League place (hopefully 5th) and a cup – if we can do it. If he gets a higher PL place and CL qualification then hooray, but I really don’t… Read more »

Yes, we still have quite a few “passengers” in the squad but that’s because we couldn’t sell some of them in the recent transfer window. Nobody wanted them as they are “passengers” and therefore difficult to sell because other clubs know it. Most will probably be around until their contracts expire.

We have a big squad because we were unable to sell the players who shouldn’t be there AND we’ve got talented youth prospects who are still on the fringes of the first 11.

Arteta picks the best team for every game because he’s there to win. So the competition for places is incredible — especially on the flanks.

We’ll have injuries, poor runs of form, suspensions and COVID complications… but this is the first time I’ve felt like we have a squad deep enough to survive a season.

The weakness of our squad: Leno gets injured or loses form badly and we have to rely on Runnarson. All I know about Runnarson is that Arteta does not have enough confidence to play him in the Cups yet.

Yep, this is true. I guess this is why we were linked with Raya as well. Wonder if we’ll make a move for a keeper in Jan?

Its big but midfield options are still not entirely that strong. Partey brings some pragmatism to deep midfield and he can play with Xhaka and Elneny but creative element for now remains Ceballos really pushing into that oft empty area just in front of opponent’s box. No surprise with charts that Laca was rarely in the box bc he had to foray out to find connections with no one around him or close enough within the box. IMP Nketiah should have been closer in field where he could have done more damage midweek but was too wide. BUT we had… Read more »