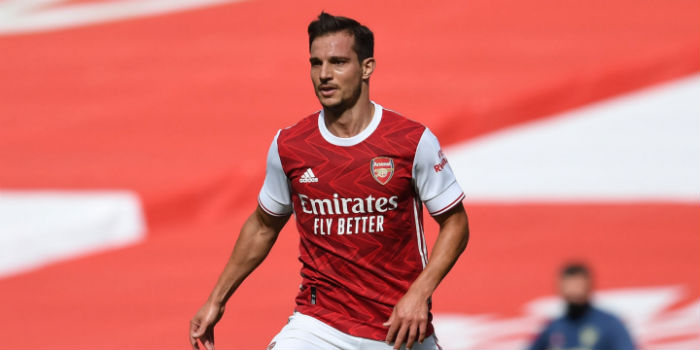 Portugal have called-up Cedric Soares for international duty for the first time in three years.

The 29-year-old gets the nod for the upcoming World Cup qualification matches against Azerbaijan, Serbia and Luxembourg having started eight out of Arsenal’s last 10 Premier League games.

Signed as cover for right-back Hector Bellerin, he’s demonstrated his versatility since the turn of the year by playing five of his recent starts at left-back.

Cedric is no stranger to the Portugal senior squad. He already has 33 caps to his name and was part of the side that won the European Championships in France in 2016.

On the one hand, we congratulate him. On the other, we share his pain at having to spend time with that glowing ballbag, Ronaldo.

Holding: It was a good bit of revenge

I like his defending, I like his panache
His balls in the box, his sexy moustache
That is all

Same here. Thought it was a poor signing to save money, but Cedric has really turned it around so much he would be my first choice RB. Mari as well silently proving to be a very good signing.

So I guess that means that Kia Isn’t all bad?

Yeh, he is exactly what they signed him for, a pretty decent and international level 2nd choice RB. We really need a new 1st choice RB. I think Hector could do with a change in direction and so could we. A new RB would be third on my shopping list, after Odergaard and Patson Daka

The doubters complained about the character of the loan and the length of contract for a player who’d obviously been signed to be a backup.

If he’s playing this well when he’s 33, I’ll consider myself proven wrong.

Cedric will be 32 when his current contract runs out.

The Only Olivier is Giroud
Reply to  Graham

Yes, but what about if he signs for a new club at 32? Maybe SarcasmB0t wants to judge him once he’s playing for said club.

This thread should be bookmarked in the , “I-told-you-so” folder, under the “player age =contract value” subfolder.

I don’t know if I can wait until Cedric hits 32 (almost 33) to determine whether it was a good deal for the club. By then, both Cedric and I might have moved on.

May just have to say that he’s playing really well at the moment and it looks like he’s justifying his place at the club.

Very impressed how he has put his head down, worked hard, and shown his quality this season. Im happy he’s with us and this call up is a deserved reward ahead of the Euros!

Haha, nice work with wolves, i heard fifa 22 wont have sponsorship with wolves, hence they gona rename the team as portugal B in epl.

Well done. We should congratulate all our players who get recognised in this way. ESR recently, let’s hope there are more.

Isn’t it amazing that someone has actually voted against this? Presumably that individual thinks we shouldn’t congratulate our players when they are called up for international duty. Very odd.

Then they should fix it, just click on the up and it goes away.

Could just be a Tottenham fan who’s still outraged, and is randomly downvoting positive comments on any Arsenal blog.

I had my doubts about him when he turned up by I’ve been really impressed by him recently. He’s definitely a better right-back than Bellerin.

On Thursday we need to really go for it and get the win. We need to keep the momentum going after a great week.

Yes, I think he has done well. On a general point, it never fails to amaze me how players can go from hero to zero and occasionally back again, sometimes across short periods of time. Indeed, some are lauded as heroes before they’ve even kicked a ball for us! You look at comments about Soares a while ago it was a different picture overall to the one today – he was hopeless, a panic buy, waste of money etc. Well, if we’re honest Soares hasn’t turned out to be the disaster that many thought. He’s proved himself a competent and… Read more »

I agree with your general point. Too often it’s the players we haven’t signed, those we have sold, those who are injured, those on the bench, or those yet to play who would definitely have been our saviours.

Fantasy football abounds and everyone can run a team except in the real world.

Congrats…Good to have a left back not distracted by the fashion industry.

Purely based on my own assumptions, I really dont have KT down as the fashion-type.

Who wants a Louis Vuitton bag if you can have a Tesco one?

I do. Ever since he signed I’ve been wearing short-sleeve T’s tucked, and a Tesco bag on my arm. Also, all my workouts are now focused exclusively on my thighs.

Not at all, distractions have impacts on performance. In individual sports like tennis, it kills careers (Eugénie Bouchard, Kornikova).

I bet you wish you’d got your left-back comment right.

He had a brutal injury, hasn’t had remotely the same pace since.

His pace was his most elite feature, no wonder his performance levels have dropped.

Your neanderthal prejudices don’t explain it half as well.

How do you know he’s prejudiced towards Neanderthals? Bit of a snap judgement.

So hector is doing enough you mean? After spending a decade at the club?

Great that he’s been rewarded for good performances but how many games will he miss for us while in quarantine on his return?

Zero because two of the games are ‘away’ and their home match has been moved to the Juventus stadium.

thanks! hadn’t seen that the home fixture had been moved out of Portugal

Not sure, but that’s what the squad is there for isn’t it?

Impressed that Pepe is going to play for Portugal and Ivory Coast.

Seriously though, he was one of the players people loved to snipe at, for the way he came to the club, and he has done really well showing what he can do. (That applies to Pepe as well as Soares.)

I think you’re being a tad harsh on those fans critical of Pepe. I suspect that many were concerned that we weren’t seeing anything like a £70m performance from our most expensive player – not consistently, anyway. He’s certainly improved, no doubt about that I think, but whether he’ll ever reach a level to justify that huge fee is open to question and that will probably always be a nagging doubt – not his fault of course, but we are where we are.

It isn’t Pepe fault that Arsenal agreed that deal, let it be on corrupt souls.

And that’s why I said it wasn’t his fault but I’m afraid that he’ll always have that price tag around his neck whether fans like it or not. It may well not be fair to him, but it’s inevitable at any club where a big transfer fee is involved.

And I think he would show us more, why he has been bought, if he would play more instead of a Willian or so. He would have much more goalinvolvements if he played some games straight.

That deal was shady as fuck. I’d love to know what went down behind closed doors.

I think arsenal handled it quite well, some of the residual class remains.

A Different George
Reply to  Arsenorf

I don’t think this will be a popular comment. I have lots of issues with Ronaldo and his personality too, but he is undeniably one of the best players of our time. If I were Soares, or any pretty good player, I would welcome the chance to play in the same team. I would tell my grandchildren that I played alongside him.

How much did he cost? Is he playing better than when we got him? Would you say that Arsenal and Arteta are doing ok with him?

NSFW but here’s the reference https://images.app.goo.gl/oy5Boc3tHEY4B36D7

Utterly earned, *whispers* I like him a bit more than Bellerin, as a RB.

I think Portugal can win the Euros again, that’s a great squad!

Will be tough in a group with France and Germany, but 4 third place teams will also make it through.

Viv The 🐐
Reply to  David C

And with experienced and professional players like Cedric, they have good people in the background. The starting line-up should be frightening.

You wonder if this misfortune is worth the call up?!

Probably the best shape their national team has been in since the Deco/emergent Ronaldo era… congrats to Cedric.

Off topic, but this guy doesn’t have a chance of a Germany recall. His contract is definitely up in summer, isn’t it?

That’s a pretty decent side!

Fair play to him. He’s had his detractors, there were A LOT of question marks over his signing but he’s been pretty reliable on the whole. A deserved call up.

Is it just me that didn’t think this was a bad signing at the time? Seems like no-one else wants to admit it in these comments.

I did, I’ve wanted him as a gooner since Southampton got him, and Liverpool have been dipping into their squad since, I thought I was wrong about his quality as they signed players like Ricky lambert ahead of him.

Yeah, I’d wanted us to sign him for a few years. Kind of went away from that idea with the older he got, but I always liked him as an option.

I even had Blogs up about his unprovoked criticisms of Cedric quite early in the piece. I predicted he would usurp Bellerin on a permanent basis by the end of the season and on form, that should indeed be the case. I don’t give a shit who his agent is if he works hard and puts himself about, he’s done that and more so good on him.