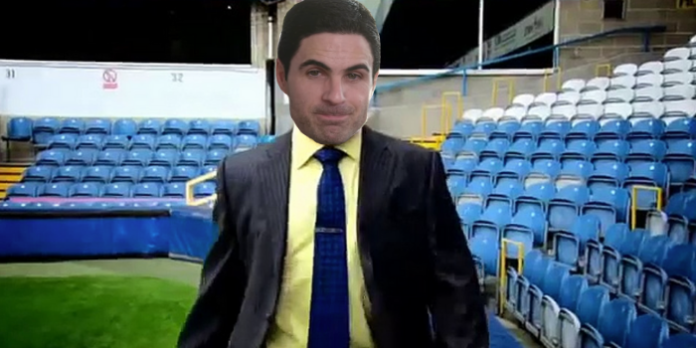 The kick-off times and UK broadcast details have been confirmed for two of Arsenal’s fixtures in April.

They are as follows:

If we overcome Olympiacos on Thursday night, we’ll have a Europa League double-header squeezed between those aforementioned league encounters.

We’re then due to round-off April with home games against Fulham and Everton and if we’re still going well in Europe a semi-final first leg.

Always felt kind of strange to watch other stuff by Mitchell and Webb after Peep Show. Guess I’ll have to give it a try 🙂

That specific sketch is one of my all time favorite comedy bits. Truly peak stuff.

Give Back a go, it’s not bad at all

Can I just bring to attention something that was briefly mentioned on the Arsecast but not really alluded to.

That should be talked about more given our historic struggles against big teams and proves we are a side that truly can beat anyone on our day.

I’ve watched the highlights about 100 times.

And by highlights I mean Jenas doing his raging toddler “it’s not fair!” tantrum on live tv.

Haha, it really was very entertaining, wasn’t it.

He just needs to beat City in the League to complete the bogey-team rodeo.

We haven’t beaten City in the League since 2015.

Daveo
Reply to  Salibaba and the Forty Thieves

Then he’s just left with the might of Burnley, Palace, and villa to complete his sweep.

Yes, that was what I was trying to say, none too successfully, in another post. We had a truly terrible record – humiliating really for a club such as Arsenal – against the other so-called “big” teams for years. That’s improved recently. But that improvement has been largely cancelled out with results against the teams you’ve mentioned which is one of the reasons why we’ve been stuck in mid-table for so long this season. Until we can do it against “big” and “not so big” on a consistent basis we won’t make much real progress.

Don’t forget the allmighty Bolton, if we ever play against them competitevly.
Arteta got the Big Game Arsenal a bit out of the way, but Inconsistent Arsenal has gone up dramatically.

Non flyong dutchman
Reply to  Salibaba and the Forty Thieves

We have improved, that’s certainly true and welcome. However, given our “games lost” tally so far, there’s still a lot of work to do – not just against the big boys but, say, teams like Burnley (who took four points from us this season). I think we need “our day” to come around more frequently (the current good run notwithstanding) to make a substantial difference over a season.

Didn’t they take 5 points from us?

They took 4 points for themselves.

This is why I have no friends.

The fact remains that while we have performed better against the “big” clubs (albeit from a terribly low base) that’s effectively been cancelled out by failing to get the points we could/should expect from games against clubs such as Burnley. We need to improve against all teams (big or otherwise) across a season.

Great observation, there’s certainly something in that.

I do believe Arteta/Edu really are steadily rebuilding and pointing the club in the right direction. They are seeding something. We may be far away from the team we desire to be today, but I can’t help but optimistic about the future.

A P
Reply to  Johnny 4 Hats

Now, when you can get over this fun fact, just know that we are still mid-table.

Johnny 4 Hats
Reply to  A P

Sorry, I forgot that within 24 hours of a most satisfying derby win we must revert to type.

I keep meaning to reread The Miserable Arsenal Fan Manifesto so I don’t make silly mistakes like having a positive outlook.

True but given the way City easily beat us in the other encounters I would remove them from the list and brag about wins against the other teams.

As Alan Partridge would say, “the proof is in the pudding and the pudding in this case is a football… poof eat my goal!”

Shit! Did you see that?

Lloris had football pie all over his shirt yesterday

LEGO hair in the wind
Reply to  Public Elneny

slow day at the office?
what a headline.
were we expecting all football to stop

It was a simple lampoon

This is the kind of content I come here for.

Wait, what? Are both the Europa QF legs in the same week? Will we end up playing 4 matches in 8 days then?

No. The first leg is between the Liverpool and Sheffield games.