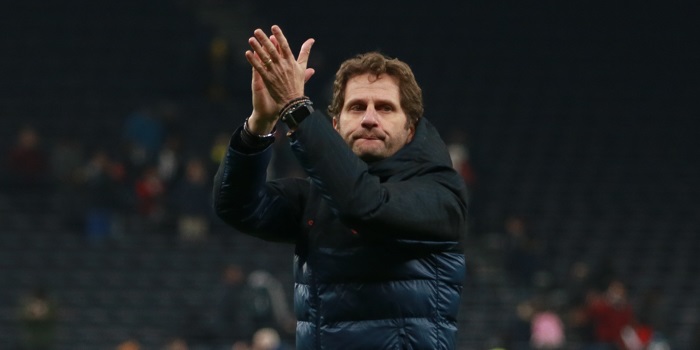 Arsenal were 3-0 winners over Sp*rs at the Tottenham Hotspur Stadium on Saturday afternoon thanks to goals from Caitlin Foord, Vivianne Miedema and Katie McCabe. Manager Joe Montemurro spoke to the press post game. The final three questions are from Arseblog News.

On whether Arsenal could have won by more…
You always want to win by more, we probably scored the more difficult goals than the easier ones today. The important thing for us is that we are getting into these positions to create chances and we’re doing it in our way and we were in control today.

On Vivianne Miedema’s stunning volley…
It looked good from where I was sitting! We know Viv’s qualities and she does that all the time in training and she does it in games also, it doesn’t surprise me.

A beautiful @ArsenalWFC team goal! 🤝@CaitlinFoord scores her 10th goal of the season in the #NorthLondonDerby! #NLD • #BarclaysFAWSL pic.twitter.com/W005eeG4Ld

On whether Arsenal are in the driving seat for the final Champions League qualification space…
We can only control our results and we can’t rely on other results, I know it’s a cliche but we just have to worry about what we are doing and keeping this sort of control over games and continuing our week to week process.

Whether this is Arsenal’s best form of the season…
That’s difficult for me to answer because we have very high standards, we were playing well in September, October and November also. We’re definitely finding good rhythm now and joy and it’s great to see the players smiling again and you can see it in the way we play at the moment.

What a volley! There's no stopping that from @VivianneMiedema! 🔥#NLD • #BarclaysFAWSL pic.twitter.com/HUfM3gCk83

On overloading on the left hand side with McCabe, Nobbs and Miedema…
We knew they were going to defend with two blocks of four, we knew there wouldn’t be a lot of room so we wanted to pull players out through rotations and the biggest one we found was when Jordan Nobbs came inside and Katie McCabe was able to receive the ball a little higher.

Whether we did it directly or by progressing through, we put pressure on their full-back and once their centre-back got dragged out we could get numbers forward. It was something we worked on in the week and when you’ve got the quality of Jordan who knows when to time those runs inside it’s very hard to mark. If the ball goes to Jordan, great, if not it goes to Katie McCabe.

On Katie McCabe getting a goal and her 11th assist of the season…
She’s becoming more intelligent in her movements so she’s getting into better positions more consistently to really hurt teams. Last year that was maybe a little more random, this year it’s more calculated and structured in terms of the positions she takes up.

A lot of the stuff she is doing now is coming inside a lot and making that extra midfielder sometimes and sometimes she stays a little higher and that’s very hard to mark. Because her positioning is more consistent she is receiving the ball in better areas.

On Lisa Evans’ injury…
We’re not sure but we’re thinking after the international break she’ll be back. It’s been an Achilles’ tendon ongoing for quite a while, probably the whole time I have been here it s just irritating her and we thought now we a good time to give her the injection she needed and see if we can get this done and move on. We probably could’ve played her and managed it but we just felt it was the right time.

Well done Sp*rs, always reliable. And to our team, obviously.

Sp*rs will always be whooped by the Arsenal women team 😂🤣

Miedema is unbelievable, what a volley

Can we tax her for the men’s first team?

Well done ladies, and congratulations to Viv for the goal of the year.

Viv! What a strike. No stopping of that shot.

Very enjoyable. Tottenham should know now where they belong. Decisionmaking could have been better at the back and in transition. And to give them those chances at the end was very unnecessary.
With defenders coming back, I hope we win every game from now on. CL is a must.

Arsenal looked a happy team yesterday, which they haven’t always been this season. I think the crunch comes on 2nd May when we’re away to Everton. I watched some of their match today, a 5-0 away win at Brighton – no room for any complacency. It’s not the first time I’ve been impressed by Hayley Raso, but I’m hoping our Matildas know how to stop her!