THE LOWDOWN
After last Friday’s massive 2-0 win over Manchester United, Arsenal travel to the Tottenham Hotspur Stadium to take on their North London neighbours on Saturday afternoon. The Gunners now trail Manchester United by three points in the final Champions League qualification slot with a game in hand and a vastly superior goal difference. Win all of their remaining games and Arsenal will qualify for next season’s competition.

Despite being played behind closed doors, the match will be played at Tottenham’s new stadium as opposed to the women’s usual home at the Hive. While the bows and whistles are all very nice for the promotion of the game and the spectacle, the three points are the most important thing for an Arsenal team who have already beaten Spurs at home in the FA Cup, WSL and Conti Cup so far this season.

Listen to every tackle, header, touch and battle against @ManUtdWomen! 💪

With away matches at Spurs and Bristol City before the April international break, nothing less than six points will do. When this fixture was played last season in front of a crowd of over 38,000, Spurs looked extra motivated by the crowd and the environment and made Arsenal work for their second half breakthrough.

It remains to be seen whether an empty Tottenham Hotspur Stadium has a similar effect, but Spurs did hold Arsenal to a 2-2 draw in the Conti Cup before losing on penalties at Meadow Park in November. Tottenham also have a new coach in Rehanne Skinner since those early season games. The task for Arsenal is simple, play the game and not the occasion.

A WORD FROM THE BOSS
“We know they are strong on setpieces, training on setpieces are an important part of our week and they are integrated into every component of training from the tactical perspective. Sometimes we might have a game and start with some corners and we simulate what the other team is going to do in terms of attacking and defending. We’re well aware of someone like Alana Kennedy and her ability in the box and Siri Worm with her delivery so it has been a focus this week to make sure we are alert and understand the danger they carry on set plays.”

TEAM NEWS
Beth Mead will serve a one-match suspension following her red card against Manchester United- the first of Joe Montemurro’s reign. Leah Williamson is in the squad after a dead leg kept her out of the victory over United, while Jen Beattie is unlikely to be fit due to a calf injury. Steph Catley (hamstring) and Viki Schnaderbeck (knee) are certainly unavailable, Lisa Evans continues to manage an achilles problem and is not in the squad.

LAST TIME OUT
In this fixture last season, Arsenal ran out 2-0 winners at the Tottenham Hotspur Stadium thanks to second half goals from Kim Little and Vivianne Miedema. In the reverse fixture, a Vivianne Miedema hat-trick, a brace from Caitlin Foord and a free-kick from Katie McCabe gave the Gunners a resounding 6-1 victory at Meadow Park in October.

THE OPPOSITION
Spurs currently sit in eight position in the WSL eight points clear of the sole relegation place, however, four of their next five games are against Arsenal, Manchester City, Manchester United and Chelsea. Spurs parted company with long-term joint coaches Karen Hills and Juan Amoros in November and appointed Rehanne Skinner, who once held a coaching position at Arsenal.

Skinner began her Spurs tenure with four consecutive WSL wins but now Spurs haven’t won since 17th January, including disappointing defeats to the likes of Aston Villa and Brighton and draws with Reading and Bristol City. They have only scored three goals in their last six games and they average just less than a goal a game this season- it’s easy to see where their biggest issue is. Only 38% of their goals this season have been scored from open play. That said, they were awarded three points by tribunal recently after Birmingham decided to postpone their match against Spurs in December.

PLAYER TO WATCH
With Beth Mead suspended, Lisa Evans managing an achilles problem and Katie McCabe still required at left-back, Arsenal don’t have the natural wide option available to them that Joe Montemurro likes. Ordinarily, he likes for Mead or Evans to hold the width of the pitch on the right, with Foord or Nobbs roaming inside from the left.

On Saturday, Arsenal are likely to play Foord and Nobbs in the wide positions. It will be interesting to see how Arsenal adapt their plan without this more natural width. They will enjoy the lion’s share of possession so Noelle Maritz’s role at right-back will be crucial in creating that width on the right flank. 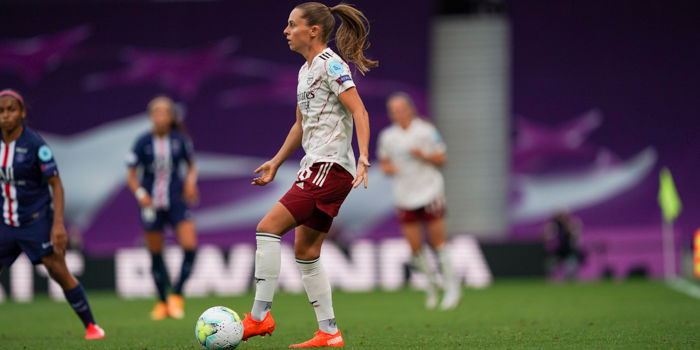 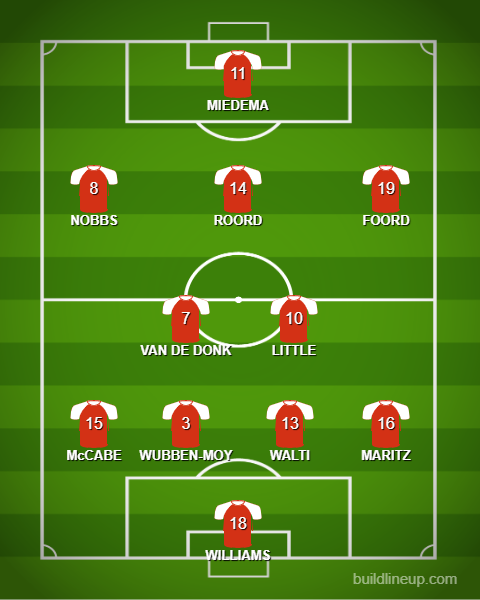 HOW TO CATCH THE GAME
The match will be played behind closed doors at the Tottenham Hotspur Stadium at 3.30pm on Saturday, the game will be streamed live on the FA Player app, which is free to download.

COMING UP
We will speak to Joe Montemurro and post a full transcript of his press conference on the site on Saturday afternoon. We will also have the usual analysis piece for the game on the site on Sunday or Monday too.

Good old Spurs! Regularly making us happy (for the men the EL and the NL Derby).

Hope the Spurs women can keep up making us feel good about something.

Derby has no gender…

The Spuds cannot score goals so how about shaking things up a bit? Put Leonie in as right back with Noelle in front of her to provide width on that side. Bench Jill because things have not been too great for our performances with her lately, have Caitlin as a centre forward target for Katie and Noelle to aim for with Viv as a roaming 10 to sweep up defensive clearances and pull the defence away from Caitlin. What we must do is take the game to the home team and be ruthless. Minimum requirement is a comfortable 3 points… Read more »

It is easier said than to execute

Don’t give Joe too many ideas on how to swap people around in every position. Otherwise he will really do it.
But I must say I’m not to sure who to play and how to fill the gaps either. There were only a few standoutperformers.

The smegging FA Player app won’t let me watch live, only listen! How can I watch the match?

Same happening for me. I’m Stateside. The Live Soccer TV app says the game is on NBCSN, but the network is actually showing championship rugby. I’m guessing the FA Player is blocking video for me b/c I’m supposed to be watching on cable, but cable can’t figure out the difference between rugby and the WSL? Good times.

Also, the CIty v Reading game later on NBCSN shows up in the channel guide, but not our game. Arg.

Found it. It’s on Sportsnet Now in Canada. Only available online, no broadcast on any cable channel. And you have to be subscribed to more than just the basic cable regional Sportsnet channel to be able to watch (which, fortunately, I am).

Still 0-0 after 25 minutes but we’ve been by far the better team. Come on ladies!

Edit: 1-0 to the Arsenal! Foord with the goal on a lovely passing move!

Had to do roughly the same thing. Log on to NBCSports.com, then use my FutoTV login info to be able to stream. Better late than never. Kind of hilarious that I’m using a Fubo subscription, to log on to NBC online, all to access what is ultimately an ATA Football feed.

So the game is ultimately on ATA website, no cable sub needed, just free account for ATA.

Here in Colorado, if it is not on FA Player, it is usually on ATA Football, as it was today.