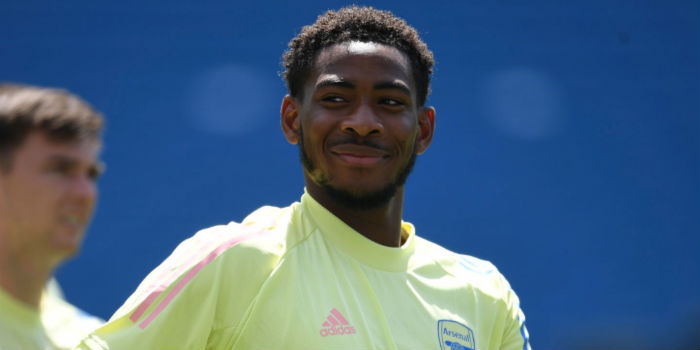 The centre-back situation at Arsenal is certainly an interesting subject, with the club having a host of options in that department both in the first-team and beyond.

Gabriel, Rob Holding and Pablo Mari will surely still be heavily involved next season, while David Luiz could stay and it remains to be seen what will happen with Calum Chambers. Beyond that, William Saliba and Konstantinos Mavropanos are due back from loans and will be looking to fully establish themselves as Arsenal players.

In addition, Arsenal also have to make decisions on a host of young centre-backs from the U23 squad who have been out on loan this season, namely Daniel Ballard, Mark McGuinness, Harry Clarke and Zech Medley.

It seems likely that all four players could go on loan again, with opportunities to break into the first-team next season set to be limited.

Ballard has impressed for Blackpool in League One and a temporary switch to a Championship team would be appear to be the natural next step.

McGuinness is an interesting prospect and has also done well in League One with Ipswich Town. If an opportunity to go to a Championship club on loan arises then it is likely that he too could be playing in the second tier next season.

Clarke, meanwhile, has been playing for Oldham Athletic in League Two and is certainly capable of operating in a higher division, so he could make the step up to League One.

Medley started the season on loan at Gillingham but is now in Scotland with Kilmarnock, so it is a little more difficult to predict where he will end up next campaign, but a switch to the Championship cannot be ruled out.

Arsenal also have Omar Rekik to consider, with the former Hertha Berlin player highly regarded at the club, although he has yet to make his debut due to injury.

Former Tottenham Hotspur defender Jonathan Dinzeyi hasn’t been especially impressive since joining Arsenal but he could also head out on loan at some stage next season.

I’d be ok with simply rotating between Saliba, Gabriel, Holding, and Mari, with 1-2 youngsters (either from the academy or cheap signings) filling out our depth. Of course, that assumes the club and Saliba patch up whatever tension he’s feeling right now.

If they can’t it’ll be a huge failure of management and higher-ups.

I don’t want to think it, but it is impossible to consider the possibility of Arsenal screwing things up. He won’t be the finished article, I wonder, how many games he would get in the squad. Even looking at no European football.
It would make the club look really shaky, if he wants to leave. Prepare yourself for some meaty interviews over the next year from him.

There was talk of Tarkovski a couple of years ago. I cannot emphasise how epic it would be to have a Tarkovski and a Ballard playing side by side for Arsenal were it to happen.

Had to check my calendar for a second there!
Nope not April 1st

Not much of a science fiction fan then?

Unfortunately not.. Went way over my head

I was impressed by Chambers in his first two or three months in the club and haven’t been able to forget that to date. But he can’t sit on the bench waiting for his chance his entire career.

Viv the 🐐
Reply to  Heavenly Chapecoense

Can’t see it either. He surely wants to go. I looks very much like it.

Saliba is going to be sold like Bielik. All I demand now is a good defence. Whoever they put in defence doesn’t matter to me. I want results.

Are you aware that Arsenal have one of the best defences in the league? We’re joint third with sp*rs, and only have Villa (played 2 games less) and an insanely good Man City side ahead of us.

Sorry… just to add to this. You wanting results is all well and good, but it’s the creativity and goalscoring side of things which have been the issue this season.

Hmmm not exactly. The fact that we ship less goals is directly connected with our creativity issues. The quality of our CBs means that they cannot afford to be caught in open space. Big teams have CBs that can defend large spaces not only compact lines like ours.

Hence the team is playing with handbreak hence we dont commit to many players upfront hence for long periods we are just passing around safely.

There are options to rotate players of course, but it looks to me that we simply have too many CBs (albeit at various career stages) to keep everyone happy for too long. Loans are an option, but only for relatively short periods or we fall into the Wenger-era problem where young players were loaned out almost constantly – to nobody’s benefit. I don’t think that we’ll have all the CBs mentioned in the article at the club by around this time next year. I suspect that Chambers will go and I wouldn’t be surprised, although I would be disappointed, if… Read more »

If you can separate Luiz attributes from the disappointing moments– his attitude and experience have been good for the team. Particularly the youngsters. Have felt that his moving into a coaching role at the club was always the goal– possibly into the front office or Academy (vis-à-vis Per) at some point.

I mean I can only imagine David to be a motivational coach or a life coach or something like this. I don’t see him fitting as a manager or so on. That would take away his freedom. He would take a Bergkamp approach: As long as I can play Golf in the afternoon, I’m good with the role. (I think i heard that in an Interview regarding an Arsenal return). I would kinda keep Luiz for a year, though not his playing but his personality and experience. Let 4 younger players do the job and bring him back if needed,… Read more »

I really enjoy learning more about these youngsters. I have no clue if any of them are good beyond what others report but it’s still interesting

Lots of decisions to be made at CB this summer. We probably cannot offer both Saliba and Mavropanos the game time they need at this stage of their career (and we likely cannot even fit both in our European squad as both would take a non home grown place) but it would be a shame to lose either permanently. Luiz should get out of the way for the next generation (and again: too many non homegrown players), and Chambers would probably be better off moving on as well, even though he could have easily claimed Holding’s current role if luck… Read more »

Viv the 🐐
Reply to  Someone On The Internet

Let’s look first to get some european football next year, as it is not guaranteed. That Homegrown thing is a real worry. We really have to look after that one. I think Mavropanos will be a good asset in the summer. Maybe a buyback-clause? I hope we don’t desperately need him in the future. We have to decide on one of the both, and I would still pick Saliba, because of the potential. Let’s see.

All of a sudden a real promising crop of players in one of our historically worst positions the last 10 years has shown up. It’s a really tricky one with regards to, how to get them the best possible gametime experience. In my world, it is hard to judge a CB until he is like 23/24. You have really promising players before that, but around that age, I think, you can really see who is going places. Similar with other positions, though they can shine easier, and don’t need that much experience and consistency as defenders do. So I don’t… Read more »

Funny…we are swimming in cb’s yet apparently still on the lookout to bring in another one in the summer.

Ipswich are my second team so it’s interesting you mention McGuiness. Fans like him but feel that he’s too prone to making mistakes. He was pretty bad at the start of the year. Maybe that’s what comes with being a young defender learning his craft.