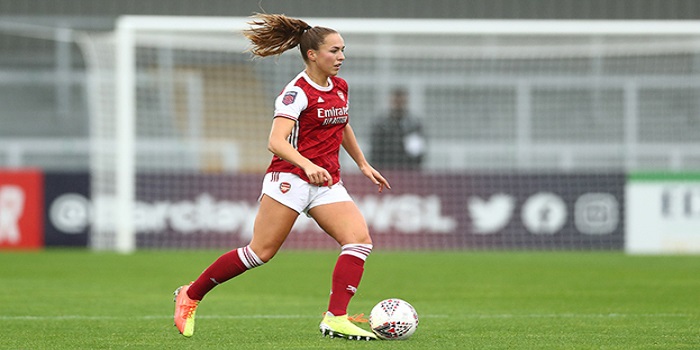 When Arsenal lost Leah Williamson to a dead leg ahead of the crunch game against Manchester United last month, they were left with a personnel crisis at centre-half. With Viki Schnaderbeck and Jen Beattie also injured, most people assumed that Anna Patten would partner Lotte Wubben-Moy in a talented but inexperienced combination.

However, it is not just Wälti’s defending that has represented a boon for in-form Arsenal. Her ability to play the ball comfortably with her left foot has opened up new angles as the Gunners pass out from the back. Though principally right footed, Wälti has now played more passes with her left foot than her right in the WSL this season. For her country in midweek, Wälti provided an outstanding long range assist with her left foot and dispatched a pressure penalty into the top corner with her right.

Gunners boss Joe Montemurro told Arseblog News that Wälti’s comfort on her left side has helped Arsenal to play out from the back, especially as all of the regulation centre-halves are right footed. “It has (given Arsenal a different dimension). It has helped us because when you are on your natural side, you see the pass earlier when you don’t have to switch the ball onto your stronger side. It’s helped us that she is comfortable on her left- it just means that when there is a pass over to the left she plays it quickly.

“Her stats in terms of playing in between the lines are very strong too, she just finds those pockets of space early. Wally has always been comfortable in changing the point of the attack to the left and the right, that’s something I saw straight away when we did an analysis on her before she signed. She gets in positions facing forward and she can use her left foot and it gives her teammates just a second more to receive. It has helped us, yes.”

By far Joe’s best and most important signing. Others may grab the headlines but Arsenal are a more convincing team when Wally is on the park and her performances at centre back this season have been inspired. The new person at the helm, whoever that may be, could do worse than consider swapping Lia and Leah positionally in the starting line up.

BTW, Lotte looks to me like a future Faye White and we have needed some determined leadership at the back for a while now to balance the team of magicians in front of them.

Funny how one of the few instances where the dictionary correct use of the word “ambipedal” could be applied to footballers and yet we still prefer to use a word that literally means “equally proficient with both hands” for an outfield player!
Just saying!
Yours faithfully Captain Pedant 🙂

I recently learnt that the correct term for good use of both feet is ambipedal.

I am a big fan of footballers who are ambipedal so naturally I’m drawn to Wälti’s passing style. Fbref has her right foot usage at 52% which is insanely low for the dominant foot.