This performance has me torn.

Arsenal did enough to win this match and probably should have won by a comfortable margin (about 35% of the time, a team with this quality of shots would score 3 or more goals). Arsenal also punted the first 20+ minutes of the match with almost no threat. Finally, Arsenal failed to do the basics after finally getting the goal that they deserved.

So instead of being happy with a 2-0, 3-1, or even 1-0 performance that would have put Arsenal with one foot in the semi-final, the tie is still pretty close to a toss-up (FiveThirtyEight has Arsenal with a 61% chance of moving on).

Arsenal 1-1 Slavia Prague: By the graphs 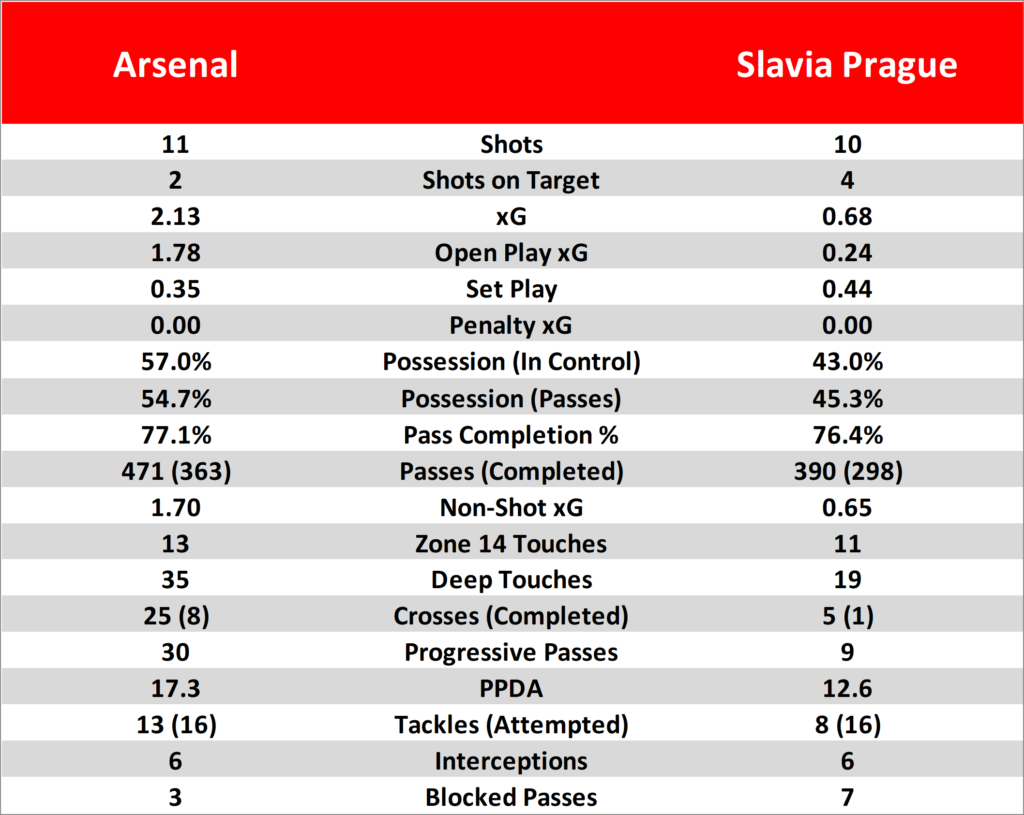 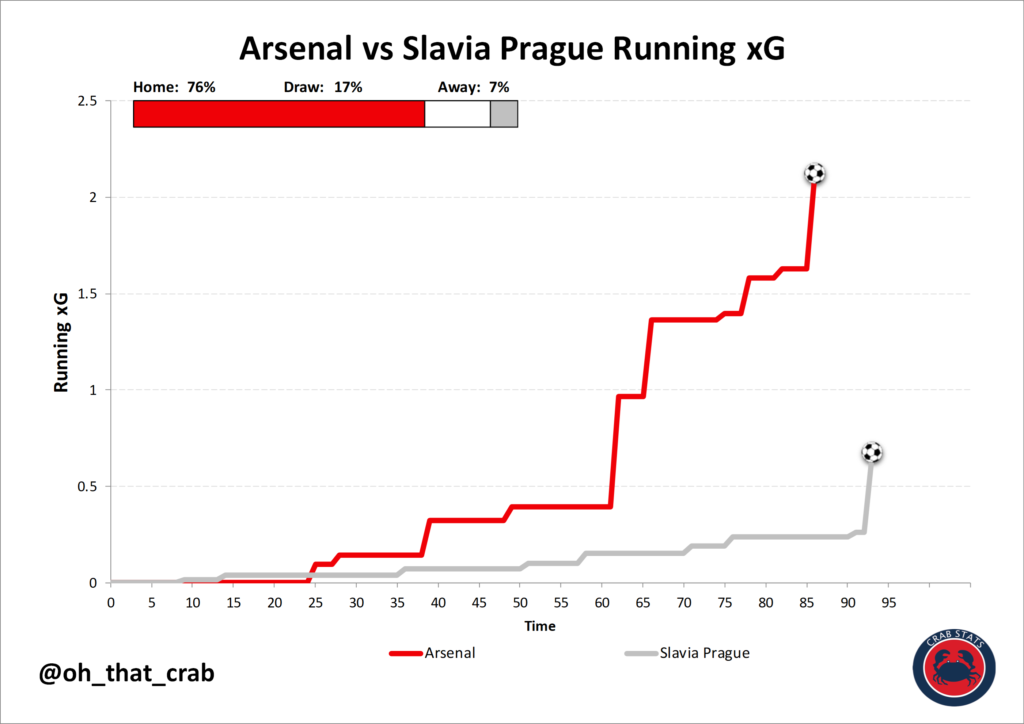 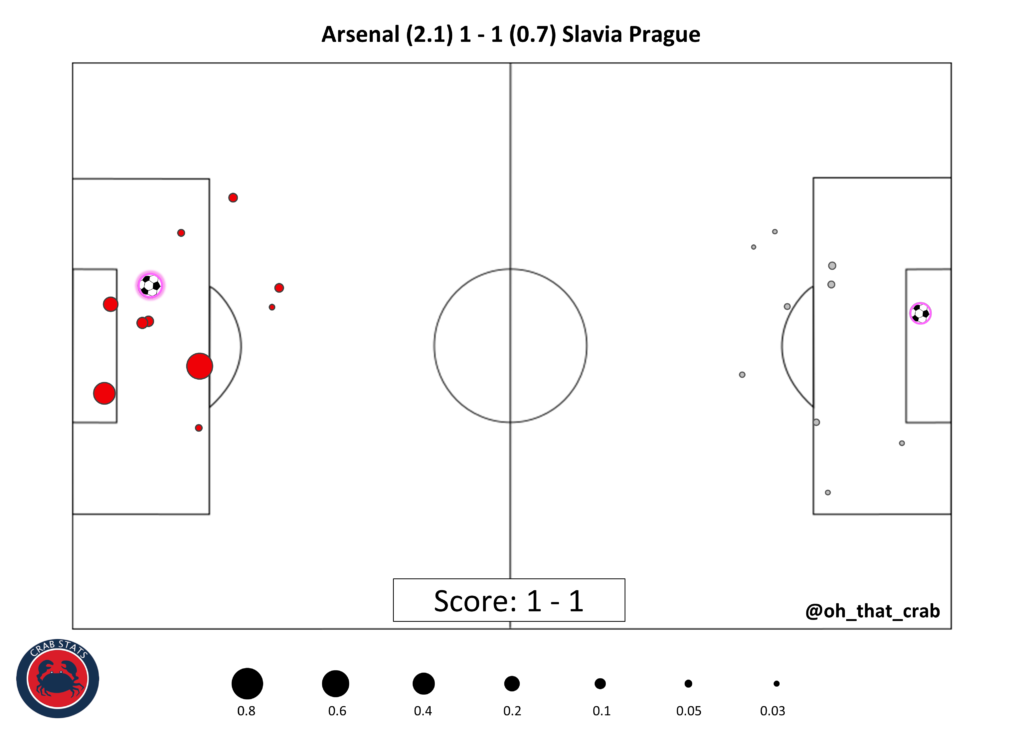 56% – Arsenal’s possession in the first quarter of the match

This was another really slow start for Arsenal. I find too often that Arsenal doesn’t seem to take advantage of the opening periods of matches, they seem to play very conservatively to start matches. In the Premier League, they average just 1.6 shots in the opening 15 minutes of matches (allowing just 1.4) which is the fewest for any 15 minute chunk of match time.

Slavia Prague did come out pressing in this match with a Passes Allowed Per Defensive Action, PPDA of 13, where lower numbers signify more pressure but Arsenal handled that quite well completing passes at a rate higher than expected.

5 – Shots allowed from the 23rd to 86th minutes by Arsenal

The middle section of this match is where Arsenal played well. Arsenal dominated in the important stats, they were much more effective at getting the ball into dangerous areas, they turned that into shots, and took advantage of errors to get clear-cut chances. It is unfortunate that Arsenal couldn’t take further advantage of this spell (another reoccurring theme) to score multiple goals.

After scoring, Arsenal really struggled to play. Part of that was that Slavia Prague put Arsenal under more pressure (they had a PPDA of 7.0 in this period) but it really looked like Arsenal had no idea how to deal with things. Arsenal couldn’t string together passes to move the ball away from their goal (they managed 0 chains where they completed more than 3 passes in a row) nor could they effectively clear the ball.

It is really weird to me how Arsenal can look very competent with their passing and possession for the majority of a match but lose all technical ability as soon as it is time to protect a lead.

Looking at this in totality, Arsenal was good for the majority of the match, they were probably overly conservative to start things and then finished looking ridiculous. That probably should have lead to a win but with the fine margins or a low-scoring sport, it was not good enough.

Sources: Opta via WhoScored, my own database

PSV game off but Gunners will face...

Excellent article! I thought my view of the performance must have been skewed – given the numerous posts on here slating it in it’s entirety. Glad my eyes aren’t deceiving me!

As I thought at the time, bringing on 3 subs at once was a good tactic because it did have an impact (meaning we created big chances in those final stages – even if only one of them was converted)

As I say, it’s really hard to change the dynamic of a bad performance mid game (the way scoring a goal in front of your own fans can), but MA’s substitutions, even if they were a bit late, did work last night.

39% – Arsenal’s pass completion rate in the final 10 minutes of the match.

It’s called “we kick it long”

Just a clarification: I don’t think the Saka chance was ruled offside, though that is what the commentators (and apparently OPTA, or whoever compiles statistics) seemed to think. The assistant referee never raised his flag until after Saka’s shot–and then I am fairly sure he was not indicating offside but a goal kick. He held his flag straight out and parallel to the ground. This could possibly mean an offside in the middle of the pitch, of course, and we can’t demand that an official running the line (and literally running) get the exact angle right when raising his flag.… Read more »

Very good article. Unfortunately, at the end of the day the only number that really counts is “1” – the goal that they scored to equalise the match.

Is there any stat out there on aerial duels won by us(not including inside our penalty box)? I feel like no matter who we play, the other team always win the ball in the midfield or up front.

We started playing crosses when Giroud was no longer around. I miss that beautiful Frenchman

What would be interesting would be see how many goals we conceded this season from set pieces(corners free kicks penalties), counter attacks, organized attacks individual mistakes etc.

We have them all in our locker

Salibaba and the Forty Thieves
Reply to  Kostas

I think this is similar to what you’re looking for.

Scott, can you tell us just how much of our possession was passes between Holding-Gabriel-Leno? It was so frustrating.

This may be down partly to a lack of movement ahead of them but seemed like a definite plan.

I think a draw in that game might be a blessing in disguise. We’re not a good defending team. Knowing that we need to win will make us to attack and focused. Looking at our previous 2nd legs, we almost lose the ties because we were complacent. This is win or go home for us. Hope we respond well to the pressure.

AMN's cheeky grin
Reply to  Me from here

I’ve been thinking this exact same thing too … but I’d avoided saying it, out of fear of jinxing us!

Anyone know if there will be any home fans
allowed in Prague (I’m assuming not)?

There are usually a few VIPs that need to get tested beforehand. But other than that, there shouldn’t be any fans

2 shots on target! What can we expect, if even us, fans don’t know our starting 11. Way to many changes. Players look very confused on the field. Nobody wants to take responsibility to take a shot. At least, what it seems like.

Once again the number show that we completely fall apart at the end of the match. Unfortunately the last part of the match is most important part.

Seriously, I think we need to put this season behind us and start thinking about next season. We’ve no chance of winning the Europa Cup and we’d be lucky to qualify for it next year.

It’s going to be a big summer for us – one of the most important in years…..

With all due respect, I think your summary misses the clear implication of Arteta-ball: the inability to create a sufficient number of chances.

Twitter is in spasms over a missed great chance or two. What that misses is that even great chances get missed 40-60% of the time.

Don’t blame a player for missing a single high odds chance. Blame the coach whose system creates far too few of such chances. Game in and game out.

I completely agree with you, i don’t understand the downvotes.

Agree as well. Everything he said is factually correct, even great chances are missed 40 to 60% of the time.

Salibaba and the Forty Thieves
Reply to  REal

Sometimes I wonder if there are voting bots being used on this site. It’s highly unlikely but some downvotes really don’t make sense sometimes.

Poor starting of games and poor finishing of games…characteristics of a team of young players.

How did the competitive mentality of the players at this club fall so far behind their talent…?

We created enough good chances to score 3… but kept missing the target. When the only calm striker, Pepe did score, we should have won, but instead forgot how to pass the ball, inviting pressure.
I see a team lacking in confidence, who believe a negative narrative about themselves, and panic in the key moments.

How could we have 0 shots for Arsenal in the last 10 minutes of the match when Pepe scored our goal in the 86th?

Even if we want to include the injury time, it would still be in the last 10 minutes of the match.

I don’t know how anyone can read this and blame Arteta.