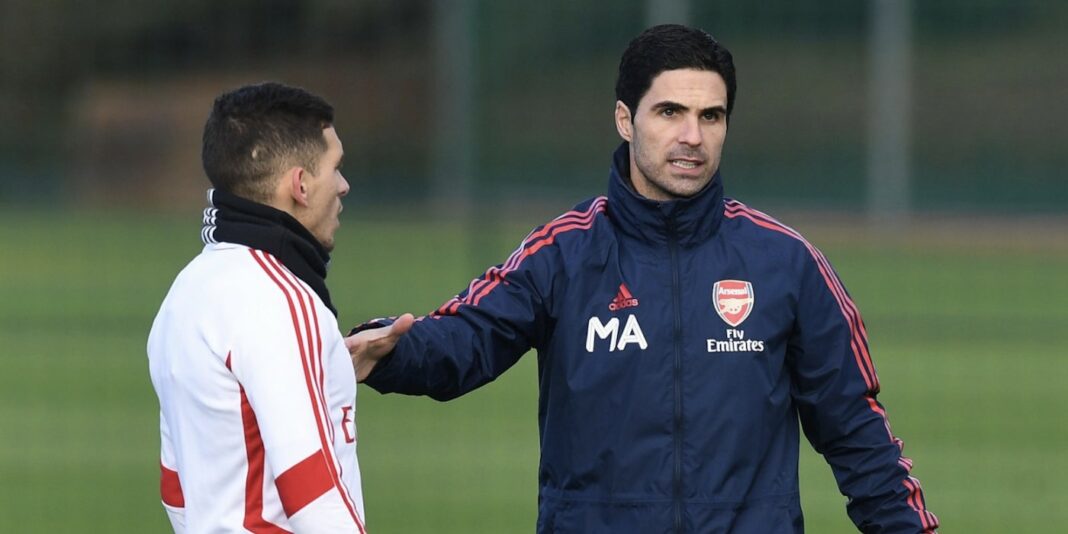 Mikel Arteta says he fully understands why Lucas Torreira would want to move back to South America following the death of the player’s mother from Covid-19 last week.

However, he believes time is needed before any decisions are made, with the 25 year old in an emotional place as he grieves her loss.

The manager said that the club had reached out to him to offer support, but when pressed about the comments in which Torreira expressed a desire to play for Boca Juniors, Arteta insisted more time was needed.

“I understand how he’s feeling emotionally,” he said.

“He probably feels the need and responsibility to be closer to his family. But it’s not the moment to make any decisions and it certainly is a decision that has to be made by different parties.

“Now, nothing is going to change. It’s just an interview with some comments. Let’s see what happens.”

Torreira is a player who could generate much needed funds with a transfer this summer, but again, when asked about the balance between the player’s desire and the club’s needs, Arteta was keen to wait until things have become a bit more stable.

“It’s something that’s very common because players go through different stages in their careers with emotional moments,” he said.

“These things happen and we have to deal with that. We know that when you recruit a player from a foreign country, when they have that struggle sometimes to adapt to a new culture, a new language, a new way of doing things.

“This risk is there and then you have to be able to manage that risk and make the right decisions at the right time.”

Torreira will see out the season with Atletico Madrid, before taking part in the Copa America this summer – after which, you assume, big decisions will be made about what happens next.

Let’s hope he can feel better soon after such a devastating loss.

If he wants to go to Boca we should make him sign another 4 year contract and then loan him out to Boca for 2 years, given that they cover his wages. This way he gets to be closer to his family, we don’t pay his wages, and in 2 years he could come back to Arsenal if he is doing well or we have an option to still sell him.

Most sensible thing to do.

So sensible that you can guarantee that we won’t do it.

Way too sensible for us!

We should sack our loan manager

It’s tricky. We could certainly get a “reasonable” fee for him even in the current, subdued, market. It depends how far the club wants to go with a valuable asset. Ultimately, we can’t force a player under contract to go a particular club if he doesn’t want to but, equally, a player can’t insist upon a move to a particular club. However, that’s obviously not a satisfactory – or sustainable – situation for either party. So something will have to be agreed, whatever that turns out to be, probably soon after the season ends. Wait and see, I guess.

It’s reasonable to expect us to be flexible in these circumstances, but we’re also well within our rights to expect Torreira to be reasonable with his demands too, and allow us to find a “creative” solution, such as by extending his contract then sending him on an 18 month loan deal.

Compassion and common decency need to be exercised here – and to be fair, he has done that.

We have to keep the option open of keeping Torreira, especially if we can move Xhaka this summer. Ideally, I’d like to see Bissouma come in—think he’s a great fit for us and an improvement on Xhaka. But even if we get him, Torreira’s future could go either way. What we can’t do is sell him to South America for far less than his European value. That would be standard issue transfer market incompetence by the club. Even in a COVID market Torreira should fetch 15m at bare minimum.

I like Bissouma, but unfortunately we can’t afford another African player in that position now that the AFCON is mid-season again. Partey will already be missing every other year at the busiest time of the season (along with Pepe, Elneny and Aubameyang next year) and although Mali aren’t guaranteed to qualify every year I don’t think we can risk losing our two first choice CMs at once.

Be strong,Torreira, in the Lord and in the power of His might. Praying for you and yours. Cheers, Bro

Perhaps this is one of the few occasions where a sell on clause makes sense? Sell him to Boca for a small fee they can afford (5-10M?) with a 50% sell on clause. If he comes back to Europe in a year or two we end up with a reasonable amount of money; if he stays in South America we will never get a decent amount either way and at least get him off the wage bill.