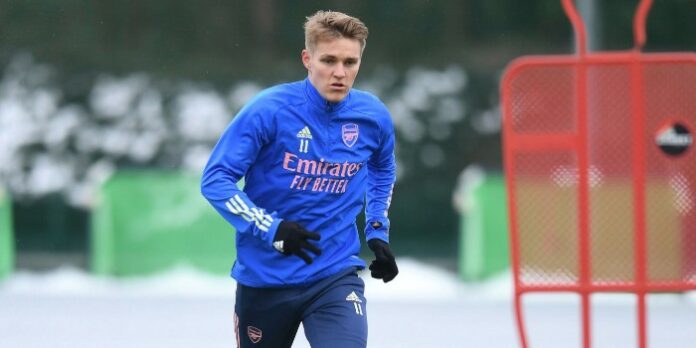 Pierre-Emerick Aubameyang and Martin Odegaard will not be available for Sunday’s Premier League clash with Fulham.

The captain continues to recover from malaria, while the Norwegian international is still suffering the effects of an ankle injury picked up on international duty. It is hoped he can return to training next week.

There don’t appear to be any new issues since the 4-0 win over Slavia Prague on Thursday, leaving just David Luiz and Kieran Tiereny sidelined with knee issues.

Mikel Arteta is expecting a tough battle against a team scrapping for survival, with Fulham now 7 points from safety after Joe Willock’s late winner for Newcastle moved them above Burnley and Brighton in the table.

“Obviously, they want to maintain the club in the Premier League,” said Arteta.

“In my opinion, they’ve been really unlucky with some results. I started to watch them a few days back and I really like the way Scott sets his team up.

“It’s really brave, they know what to do really well and again I think they’ve had some very unfair results that could have put their team in a different position.

“They’re going to come here to do what they always do and it will be difficult.”

Martinelli, ESR, Pepe and Laca tomorrow please. Saka can have a rest before he destroys Everton on Friday

Viv the 🐐
Reply to  Jack

Yeah those are the names for me too. We should kill the game off quick again so we can sub off ESR and Laca to preserve their firtness. Key players for the next weeks.

I must say, after ESR’s performance on Thursday I’m feeling a lot better about potentially missing out on Odegaard. I’d almost forgotten how devilishly good he is as a number 10 and I think if we were to look for a player that could provide back up to Emile in the summer, I’d be fine with that. Possibly a young midfielder who could deputise in a few different roles. He’s such a special player but Saka is taking all the headlines at the moment and it’s easy to forget just how good he is. Without those two, our future would… Read more »

Agree 💯. 1 year ago when he was doing well at Huddersfield and some fans were saying he could make the creative role his own, a lot of people doubted his ability to take on such responsibility. Amazing progress in just 4 months in the first team! How about Willock as his deputy? Not the same style but has a knack for scoring goals and is doing well for Newcastle

With ESR you’ve just got to be careful with his body and his injuries. We’ve seen playing too much too young can stress the body and lead to future problems, and he already seems to struggle a bit.

He needs to keep being pushed and we need to be in a position where if he needs a rest we can give one.

That looks good to me. Bring on Saka after 60 minutes if we’re not winning.

I’m torn, I think momentum is a genuine thing so a win today is important even if it’s unlikely we’ll get anything tangible from the league.

But with his injury history and potentially no Odegaard for the EL, isn’t it a massive risk starting ESR?

I am not sure why so many people have given up on the league. It looks likely the outcome of the cups will make 7th place a qualifying position for the Europa League. Win today and Arsenal are 2 points off 7th. There is all to play for.

We’ve no chance without those two.

Thanks for understanding that my post was ridiculous and had to be for comic effect.

If you want something else then look at how the clock has just changed here: http://haveyoueverseentottenhamwintheleague.com

People not finding it funny that the 60 years of Sp*rs winning the league was yesterday?

We’ve scored 7 goals and conceded none in the last two games without them! And Fulham aren’t that strong…

Looks like we won’t get Odegaard from RM, so I’m actually okay with him not being available and give ESR an extended run at No.10, and get Pepe / Martinelli into the team. I’m a big fan of Odegaard but equally, I’m resigned that we won’t get him, so we should focus on our own players. We’ve looked very good with ESR at No.10.

Yes, I think you’re right about young Odegaard. RM apparently want to keep him, along with some other “elite” youngsters. Can’t blame them – it’s what we want to do with the likes of Saka after all. Developing youngsters rather than buying in expensive replacements is likely to be (even) more common including for mega clubs like RM. However, there’s life after Odegaard if he’s bound for Spain at the end of the season.

Viv the 🐐
Reply to  Biggles

Yeah, we just a bit of money spent, get some quality and did not block off ESR (which so money feared, which was just OTT). And we will still need him the next few weeks. And we still have all options open and don’t have to care a new piece of dead wood. I’m curious of what they want to do. I have a funny feeling about Mario Götze. Wants to go from PSV but wants to play CL. Let’s see what he chooses.

I’d be OK with another year-long loan, hopefully RM like the way he is developing at Arsenal

Who’s blocking his progress at Real?

Well Modric, Kroos and Isco to some extent but two of those are getting on a bit. Having said that, they’re in the CL semi final so they’re a little bit ahead of us. I think it all comes down to whether the plan him to have a go at their midfield or not

Asensio played last week against Liverpool and was later subbed by Isco. So i guess these 2.

Not surprising. Given the results in the last two games, particularly against Slavia, we should get the points against Fulham without their services – but with this “Jekyll and Hyde” team of ours you never really know.

It doesn’t feel like a proper Arsenal season if our January signing doesn’t get injured for important games.

Whisper it quietly but I’d rather not buy Odegaard for a fistful of cash when we have ESR Saka & Pepe who can all do the biz at number 10 Spend it on 2 fullbacks a keeper & a young hungry strong midfielder to go with Partey If anything left ? An intelligent hold up forward por favor !

I get what you’re saying but we need back up options too. with saka, ESR and pepe. There is no creative player on the bench. I think it will all depend if we win europa league or not.

And yes Laca should go

There is also an Africa Cup coming up and ESR still didn’t prove how he can cope with playing week in and week out. Back up is definitly needed.

No problem; we have a killer squad waiting for them.
I am beginning to think we can nick sixth position if results keep going our way like this weekend.

A great opportunity to close the gap on Spurs.

Curious to see what team Arteta plays. I think I would stick to as close to the Prague 11 as possible – keep the momentum going – with the possible exception of Martinelli starting and giving a rest for either Saka or ESR. Either way, Laca has 3 runners behind him.

Full-backs are the two positions Arteta may wish to rotate though – Bellerin and Cedric patiently waiting. Maybe Gabriel gets a game but I’d actually prefer to see Holding and Mari continue to build up their partnership.

Totally agree! Either rest Saka or ESR as both just came back from injury, give Xhaka finally a break and keep the same CB partnership.