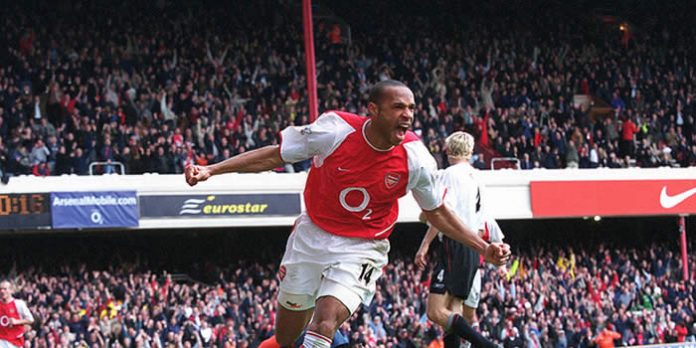 Thierry Henry will be one of two inaugural inductees to the Premier League’s new Hall of Fame when it launches this evening.

Created to recognise and celebrate the best talent playing in England’s top-flight (since 1992), it is being marketed as “the highest individual honour awarded to players” by the Premier League.

Henry will be presented with a personalised medallion when he takes up his place alongside Alan Shearer, the competition’s leading goalscorer.

Two centre-forwards, both gifted with natural skill and talent who have written their names in Premier League history

We’re delighted to announce Alan Shearer and Thierry Henry as the first two inductees of the #PLHallOfFame pic.twitter.com/MAKgi3SYzV

The Frenchman scored 175 goals and provided 74 assists in 258 appearances across two spells as a Gunner between 1999-2007 and on loan in 2012. He won the Golden Boot award on four occasions helping Arsenal to two Premier League titles.

He was so good, we even cast him in bronze outside the Emirates.

“To be inducted alongside Alan Shearer as the two first inductees into the Premier League Hall of Fame is more than special,” Henry said.

“When I was young, I was just trying to make sure I could get a pair of boots and now we’re talking about the Hall of Fame. During my career, I wanted to play hard and make sure I was fighting for the cause, because that’s all the fans want to see. If you asked me at the start of my career about entering the Hall of Fame, I wouldn’t have believed you. It’s an amazing honour.”

This isn’t Thierry’s first inclusion in a Hall of Fame. He was inducted into the English Football Hall of Fame, housed at the National Football Museum in Manchester, back in 2008.

Congratulations to Thierry – here’s a short video of him reflecting on his time in England.

Saliba: I owned an Arsenal shirt with Henry’s name on it

All hail the King, my childhood hero and reason my favourite number is 14! I feel that Giggs would have been included as the 3rd inductee based on his on field achievements but started abusing women, so im glad he was overlooked here.

What a guy. Special player.

And congratulations to Shearer too. A great player, by all accounts a good person, and a pundit I respect and often appreciate listening to.

Also, it’s nice for Harry Kane to hear you can still make it into the hall of fame if you win fuck all for almost an entire career.

At least shearer won a league title, even if it was bought and paid for.

Even so, it’s not like the other players carried Shearer to a league title – he was by far their best player.

I can take Shearer. Giggs will never get it.

On your own there buddy. I think he’s a bit of a plank with his ‘they don’t like it up em’ spiel that he rolled out as often as he could against us.

Maybe it was true, but that’s a moot point.

A great striker, I didn’t like Shearer much at the time – until I watched him laugh in Roy Keane’s face, as he tried to pick a fight with him.

Every single winning team he watches “to a man, they were putting their bodies on the line, throwing bodies forward” every losing side “they were sloppy, second to every ball and just didn’t look interested”
And for this he gets 9m quid off the BBC.

Nothing about what pundits say has to be true though. How often do you hear them say “What are Arsenal doing trying to play out from the back? It’s just asking for trouble”. And then when we adopt another tactic they go “Arsenal just hoofing it up the field time and time again. Pointless”. It’s also worth remembering that Neville called Auba, Laca and Willian a “Mafia” that wanted Mikel gone just a few weeks ago. Any evidence to support this? Nah. I’ll just say it for the clicks. At the end of the day, if they had the talent… Read more »

Sometimes pundits surprise me. Did anyone see Salah’s goal? Brilliant. And I heard no one say Bergkampesque. Which it was.

He didn’t win many trophies. But he has more than Harry Kane.

Shame on France, he got nothing there.

Congratulations to Henry, we all know he was thoroughly world-class.

Still, I’m struggling to get too excited about this Premier League Hall of Fame concept. I feel like they’re launching it too late into PL’s existence and it’s clear that there’s a logjam of players who absolutely deserve to be in it.

At the same time, a HoF focused on performance in one league in a sport which has historically had multiple excellent leagues feels quaintly regional, like a small town museum dedicated to all the important personages from that town.

I think it’s about the right time. you don’t want a hall of fame after just a season or two – it should only be the really elite players who have had a massive impact

Best player ever in the premier league, but I often wonder what the purpose of the Hall of Fame things are.

One of the best players ever.

I was there at the game when he came back and scored against Leeds (he said it was his favourite Arsenal goal ever)! And also when he came on as a sub for Barcelona and got huge cheers from the Arsenal fans (until the moment he looked like he might do something when he got boos).

That goal against Leeds. Holy shit! The atmosphere was electric. The finish peak Henry.

In terms of what it meant to the history of the club, it’s just a footnote. But if you want an example of what it means to be a supporter, what it is to love the players who wear the shirt, that was it.

Play for the badge on the front. The fans will remember the name in the back.

We’re blessed that we’ve had two of the greatest players to have ever laced up a pair of boots. Henry and Perry Groves. Sorry… Bergkamp.

Interesting gossip about him joining the team who wants to buy Arsenal. If Kroenke is stubborn there is not much we can do. But I must admit that I don’t see the logic of him not selling. He has so much bad will from everybody related to this club. The business is on a dangerous downwards trajectory. And if he actually still believes PL og just European soccer is an attractive investment possibility why not just start fresh and reinvest elsewhere. If the offer is good enough. I would really like to hear the analysis from you guys.

The Kroenkbastard owns a major sports brand in one of the major capitals of the world with real estate to match. It’s another jewel in the crown of his empire. He doesn’t care about being disliked and he won’t sell.

But as far at I have understood (and I might be wrong) but isn’t the big difference now that Arsenal has become quite a bad investment? Or at least not an investment with any prospect of increasing in value

We’re not as an appealing a prospect as we were. Remember though, Kroenke has never sold any of his sporting franchises.

If it happens, it could be a great for the club but we should be cautious about rumours concerning possible buyers. The Spotify founder, Daniel Ek, an Arsenal fan apparently, is supposed to be “interested” in a possible purchase but: 1) It doesn’t look like the current owners are likely to sell – particularly if it means making a loss; 2) But if they did sell, it’s reported that they would want £2 billion or more; 3) Ek’s personal fortune is estimated at £3.4 billion so it’s highly unlikely he’d commit a huge percentage of that to buying, of all… Read more »

This Daniel Ek story is a pipe dream.

Yes, that’s very likely true. The point I was trying to make is that with any potential takeover there are many hoops to go through before/until anything happens.

Plus the guy is a prick anyway.

As an avid music fan I have a special dislike of this guy since he is a major contributor towards impoverishing the entire music industry. His comments a few months ago about why artists can’t make a living anymore was something out of the Marie Antoinette Let Them Eat Cake manual. Steroid enhanced cunt.

Remember being at Fratton Park for and FA Cup game. Henry was booed by Portsmouth Fans much of game. He went on to put on an absolute masterclass, scored 2 goals and ended up getting standing ovation from all 4 sides of the ground – Legend

Seeing this news has been bittersweet. What a wonderful period that was for Arsenal. Well deserved, King.

I should think so too!

We sold the wrong keeper.

I can’t argue with that, although irrelevant to this conversation.

But it didn’t look like there were any potential buyers for Leno, so the club didn’t push him into the shop window. That £20 million from Villa was very good money for a number two. Would Villa have wanted Leno if we pushed him to the front? And what would you be saying if Martinez had a bad patch for us?

Very well deserved. A terrific player for Arsenal. I saw him many times “live” and in his heyday you knew he’d almost always score – and he did, of course. Oh, for that level of top class, consistent, strike power now.

We should all boycott these. Football was not invented in 1993.

This is a good point. Why not football hall of fame?

You don’t need some fake Super League to build new fanbase. You need players like Henry to make you fall in love with the game.

Ozzie
Reply to  The Kolkata Gooner

Completely agree. I fell in love because of Brady, Sunderland, Charlie Nicholas and Rocky. None of them in the PL era therefore forgotten.

Henry was second only to Wenger in helping build our phenomenal modern global fan base. I was in Tanzania in January and there were more Arsenal shirts than any other clubs.

I imagine that they must all be as disappointed as we are here in the UK about what’s happened/happening to the club.

Oh, TH’s goal against Leeds. What a moment! Imagine if two minutes of VAR had followed.

He was the best player in premier league history it would’ve been ridiculous for him not to be the first in.

All hail the King!

Nearly 30 years and it still pisses me off that football gets divided into before and after the premier league. What good reason is there to do this?

Get onto PL site now and get votes in for more AFC players who deserve to be there – DB10, Wrighty, Vieira, TA, Sol –
https://www.premierleague.com/hall-of-fame

The King of Highbury, King Henry

Congrats KING THIERRY,you are & always be the best striker of all time