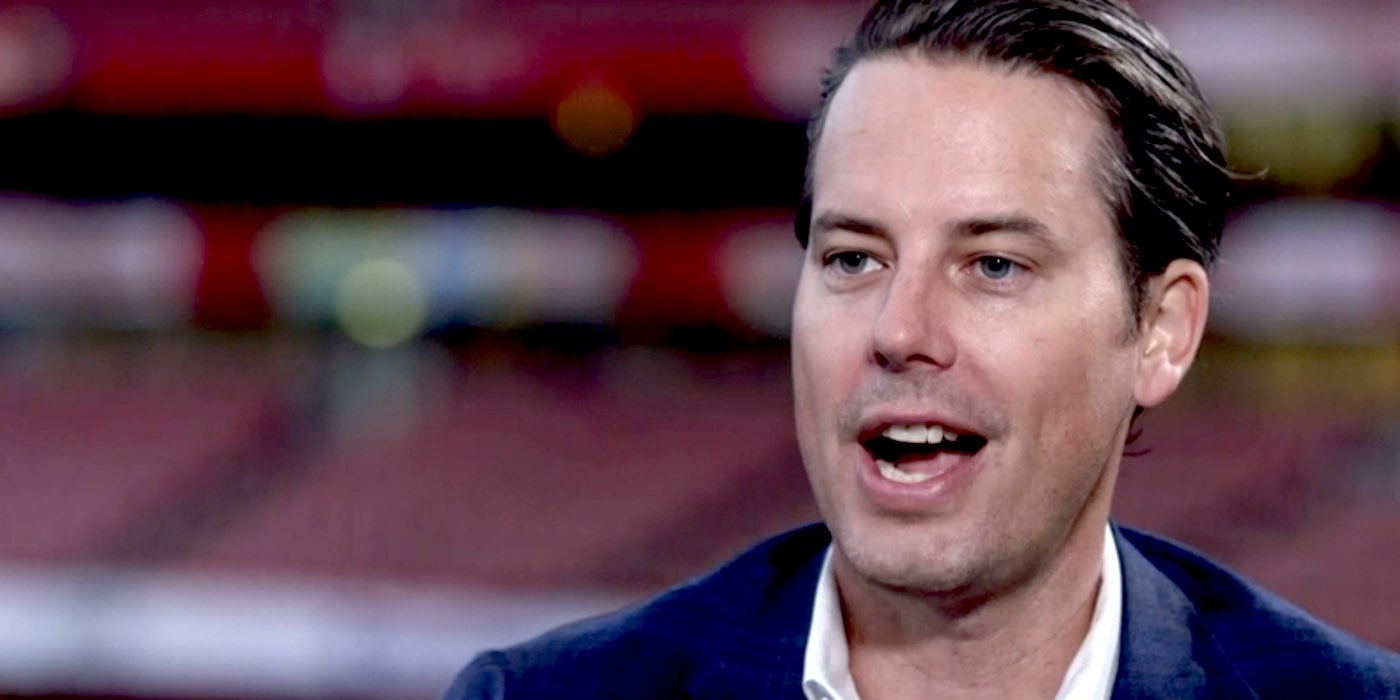 As the Super League proposals dropped over the weekend, Arsenal’s scheduled Fans’ Forum meeting was postponed.

Then it was on again, with CEO Vinai Venkatesham ready to face supporter questions about the shambolic 48 hours which have caused so much anger.

Now, having issued a statement of apology signed by ‘The Board’, it seems the ownership are about to front up and answer questions from fans face to face (well, Zoom to Zoom in the current climate).

Josh Kroenke will be attending the meeting, and will no doubt be asked to explain KSE’s intentions, what their long-term plans for the club are, and how – in the face of such virulent opposition – they intend to take things forward.

Arsenal have confirmed that Josh Kroenke WILL be attending the Fans' Forum today – which has been rescheduled again to 4:30 (UK)

We will have discussion of the meeting on tomorrow’s Arsecast from someone in attendance.

Meanwhile, protests are planned for outside the stadium before the game against Everton, with supporters keen to demonstrate their opposition to the Super League plan, and how the last few days have played out.

Arsenal fans are not alone either. In Manchester day, United fans have blocked entrances to the training ground:

Breaking: Utd fans protesting against the Glazers have blocked both entrances to Carrington

And in Madrid, there have been protests outside the Bernebeu:

This is something which is going to run and run. Greedy owners, hornets nest, etc etc.

Quotes from Mikel Arteta to come at 11am.

The only thing that would excite me is if Silent Stan said he was off but that is unlikely. The only way I can see is getting rid of them is if an orchestrated campaign encourages fans to stay away when stadiums reopen but how likely is it that people will stay away? It might cause the club some short term pain but that is what is needed to make KSE’s investment untenable. I think we are stuck with these pricks.

While I’m all for this kind of consumer action I can’t help but feel that it was the threat of the government getting involved that really got these people motivated. As was discussed on the Arsecast the other day we are a captive audience…we have an emotional connection to the club that will keep us coming back however irrational it might be. It’s not quite a religion, but it’s adjacent to it. I guess that’s where the value in the Arsenal ‘brand’ is for KSE. If a load of legislation came out tomorrow saying that there’s going to be an… Read more »

So we should push for that to happen. Write to your MPs, keep being vocal, boycott all official Arsenal social media, don’t buy any merch, don’t attend matches. This cannot and should not pass so lightly. It is time to get rid of Kroenke.

Wow. He must make it a regular thing, to have any chance of reconciling the relationship.

Also needs to bring a humungous humble pie with him!

I honestly don’t see a way they can do that as they clearly want this ESL to be a thing. I’m on the precipice of walking away from the club right now, as there is nothing left but corporate greed, supporting the team right now feels like supporting the death of football. I almost see the only way forward is for the EPL and other leagues (including champs league and Europa) to boot these teams right now and cripple them financially, which would cause massive losses for the clubs. The problem is these clubs are the cash cows of these… Read more »

Yes, it will most likely come back as a UEFA sponsored variant – one which satisfies all fat felines involved.

Yea right, UEFA has to expel those 12 clubs for trying to establish the ESL, which will then leave these clubs with no choice but to create the ESL. That will show them! /s

Do people actually think things through?

Daveo
Reply to  A P

And how well do you think it will go without a league and TV revenue to fall back on until their unbacked ESL is setup and running (without league support)? Should be a financial boon! But of course it won’t happen because FA and UEFA are barely better and rely on their cash-cow teams. If you really think this is the end of European football upheaval for financial gain of billionaire owners you’re soundly mistaken.

Really? You think matchday revenues form the majority of earnings? The global audience can only access matches through the TV/online and that is where the money is at. You think people pay to watch Sheffield United?

The funding was in place. The clubs were prepared to forfeit their respective leagues anyway.

Kicking the 12 teams out only means they better make the ESL a success.

Daveo
Reply to  A P

Your assumption is based on fans supporting the ESL, which is clearly not a popular take. There is an opportunity for fans to make a real power play here. But, it most likely won’t happen and fans will just have to suffer whatever the powers that be decide. Now if they did get some bollocks and go all in they could crush the ESL, drive these stooges out of ownership and fully back the national leagues based on exclusion of these clubs. But that would take the leagues taking a stand too, and as I have said neither option will… Read more »

Boot them out? 12 of the top 20 teams in the world? This will force them to create the ESL. Creating exactly what the greedy owners want.

He can make it as regular as he likes.
Message remains the same.
#kroenkeout

You’ve just reminded me of that scene in ‘Se7en’ where Brad Pitt discovers the dude who was made to eat and eat until his stomach split.

Please excuse me while I sharpen my pitchfork.

Nah, just keep it blunt and rusty and dipped in cow shit.

But it made such a pretty flower 🌸

Hoping to quieten the crowd for tomorrow I assume, somehow I don’t think it’s going to work. I know it’s most likely a bullshit twitter rumour, but i’d fucking love it if super Jack showed up tomorrow.

For those who can, please join the protest near the Emirates stadium tomorrow at 6PM. Our voices must be heard and the message is loud and clear “Kroenke Out” and “Football is nothing without fans”.

I’ll be there, brother.

Comrades, let’s make it big and loud. It might not work straight away but let’s leave that elephant hunter in absolutely no doubt.

Who is actually downvoting this?! Show yourselves and explain why you presumably want scumbag Kroenke to stay.

Get ready for a load of apologetic ‘we wanted the best for Arsenal’ nonesense.

You could probably write the transcript already. Utter bluster. KronkeOut!

Well, its certainly grand that you’ve judged his comments nonsense, before, ya know…actually hearing them.

How much is kroenkes social media team paying you for that comment?

A P
Reply to  James Pepper

You are a vile twat.

He has one of them faces that you give a sudden urge to slap.

I hope the fans at the meeting absolutely fucking rinse the oily haired prick.

Can’t join this Zoom call but please….rip him and the ‘Board’ a new one and ask them when they will be leaving the club. Thanks gays! (Andre Santos)

How can i join?

Years ago, when it was between Usmanov and Kroenke, I really didn’t want some Uzbekistan mobster to buy our club, but it’s quite interesting how it now seems like selling the club to some dubious criminal would’ve probably been the better choice…

The weird thing is all those that sold the club are nowhere to be seen now. They should be just as vocal as us, they should be looking for ways to correct the mess they helped make.

I actually can’t think of a question for Josh that isn’t straightforwardly abusive. Why are you a cunt, why don’t you fuck off, etc.

Wenger out - ahh, darn too late

Josh….Josh….you’re on mute, we can’t hear what you’re saying…!

“And the first question please…?”

”Yeah, when are you and your old man going to sell up and fuck off?”

Let’s hope they all take turns in telling him to fuck the fuck off.

Sadly, I don’t agree with last line prediction that “This is something which is going to run and run.”

No matter how big the one-off protest, if we sign a big name like Grealish in summer, all will be forgotten.

Hope I’m wrong, be we football fans really are that stupid.

No fear of that mate. The Kroenke led sheep are and will remain firmly in the minority.

I don’t care if we sign Grealish Salah, Neymar, Mbappe and De Bruyne in the same window – I want Kroenke and his fucking fools gold loans OUT.

The man is poison.

Read the bylaws Josh, READ THEM AND UNDERSTAND THEM

I get the hate, especially looking at what the owners just tried to do with ESL, but I can appreciate Josh Kroenke at least not hiding behind a simple club statement. He is willing to face the music at least to some degree.
Having said that, I hope all owners who tried to kill football get a huge and hefty fine, something that will truly hurt them. But I know that to be just a dream.

As an American and diehard supporter for most of 30 years, current ownership is a huge embarrassment. Having 5 major sports leagues involving well over 100 owners, there are a few who are in it for the wrong (read £€$) reasons. Kroenke is among the worst. There are many who would have been wonderful progressive guardians of the club. Hopefully they will tire of the dissatisfaction of the fans or, fingers crossed, grow a conscience.

Is there a way we can join this virtually, I’d love to see shiny face man squirm.

Please have Kroenke do the greatest thing he will ever do for the gunners. LEAVE!

I’ll forgive them just as soon as they’re out of our club.

Fuck off Stan, and fuck off Josh too. Nobody wants you here. You tried to destroy our club and the fact that you failed to do so due to mass protests doesn’t mean we can just go back to how things were.

Should be an interesting meeting. Let’s hope Josh is wearing his armoured trousers.

Really looking forward to the outcome of this meeting, but don’t expect much beside generic statements. One thing I think we as fans and the board/Kroenke agree upon is that the system must be fixed. it’s three winners after the dismantling of ESL, we as fans,the players and the agents. Us, because love of the sport,the players/agents because they still can hope for the financial madness to continue. ESL would as a closed ecosystem really fast introduce salary cap and fixed agent fees, in both cases significantly lower than today. Guys like Raiola are quite happy now. For Kroenke& crooks… Read more »

Fuck Stan and fuck his degenerate inbred son. Plans for “big investment”, I wanna hear their plan to fuck off. All fans need to stand together to get these scum billionaires out of the game, that includes standing with Newcastle to get Ashley to fuck off. We focus on the “Big Six” but Newcastle has dealt with an owner openly not giving a fuck about the fans for a long time. We’re just now expediency what they’ve been dealing with. Billionaires out, and bring the German model in. It’s not a perfect model, but at least the fans would own… Read more »