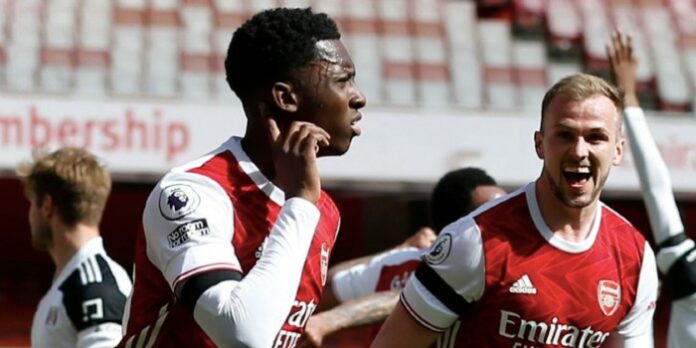 Eddie Nketiah says he was delighted to make an impact off the bench after grabbing a stoppage time equaliser to snatch a point for Arsenal against Fulham.

In search of a first-ever away win against the Gunners, the Cottagers took the lead through Josh Maja’s second half penalty and were less than a minute from the three points before Nketiah pounced at the back post after keeper Alphonse Areola had denied Dani Ceballos.

The England under-21 international has been out of favour since the turn of the year but with captain Pierre-Emerick Aubameyang sidelined by malaria and Alex Lacazette limping out of today’s game with a suspected hamstring injury, he could well become a focal point of the attack in the coming weeks.

“We would’ve liked three points but when I was called on I wanted to make an impact,” he told Sky Sports. “I’m delighted to get a goal and salvage a point for the team.

“Fulham made it difficult – we were a bit sloppy in possession, we had good chances, we had a couple which on another day might go in. Credit to Fulham for getting back in the game and getting the goal but we were good in the last 30 minutes and we deserved at least a point.”

Asked about the prospect of stepping in for Lacazette with a Europa League semi-final on the horizon, he added: “Firstly I wish Laca a speedy recovery – he’s important to the team and hopefully will be back as soon as possible. For me, I stay patient and I’m happy to get the chance to play and I will be ready to help the team if I’m called upon.”

VAR played a pivotal role in this afternoon’s action, ruling out a Dani Ceballos header after Bukayo Saka was adjudged to be a toenail offside and later confirming the Gabriel foul on Mario Lemina. It also double-checked Nketiah’s strike with Rob Holding suspected of impeding the Fulham keeper’s view.

Nketiah said the Gunners just have to roll with the punches. “That’s football,” he said.

“Sometimes it goes in your favour and sometimes it doesn’t, we can only make sure we do our best as players and VAR is there to do a job so we have to take it. Disappointing to have it ruled out but that’s football.

“We’re a big club, we want to be climbing up the table – the manner in which we grabbed the goal feels a bit better than losing. Of course we wanted three points but we’ll take the point and move on.”

Good lad. West Ham want him, we have to think if he should stay. If he can step up like today I’d say yes.

He doesn’t offer enough. I don’t blame his self-promotion, we would all be the same but West Ham can go ahead

I’d say hell no. 25m-30m bye! Eddie is not it im sorry. He’s just a tap in merchant brings absolutely nothing to the game. We have balogun to take his spot now its time to move him on.

Clearly the coach doesn’t rate him. No use keeping him if he’s only gonna play some 200minutes per season.

Sell him or change the coach.

If he keeps stepping up like today we can sell him

We could well have need of him as the constant stream of injuries continues.

NO I’d start Martinelli or Balogun instead. Actually Martinelli through the middle like Emery did he scores 1v1 shoots from outside and can score headers, hold up and link up play. Eddie can’t do any of these other than tap in. no thanks

Good lad Ed.
Another poacher’s goal to add to his transfer value.
Didn’t even think we’d get point.
The luck and var definitely wasn’t on our side, until 96th minute

Thanks Eddie but I’d prefer to see Martinelli at #9.

Hope Laca isn’t too bad though. A hamstring could rule him out for the last 6 weeks of the season.

Martinelli is not a 9, he has said it himself. Lets stop experimenting!! We have Balogun.

We are playing in the Europe as our owners have signed up for European Super League and it’s official. Which means we’re banned from playing UEFA matches for a year.

Please stop spamming this, nothing has been confirmed yet. It’s only the approval of the proposal by club executives that was announced.

You wouldn’t start calling yourself a married man if your fiancee only said yes? Would you?

A P
Reply to  Salibaba and the Forty Thieves

The fiancee probably acts like the wife from that moment on, so why not?

Ealing
Reply to  A P

Good lad. Says all the right things. Came up with an important goal.

Unfortunately, aside from poaching, not much of a goal threat.

Sell in the summer to start saving for the Coutinho transfer (LOL).

Starting laca was terrible with him being the only viable first choice available while knowing Auba is unwell and off form. Criminal

Poor Balogun. That kid shouldn’t have signed the contract. Hopefully the next manager will give a chance because Eddie is nothing but a poacher who offers nothing else.

I know Eddie the Poacher might not be a fan favourite but you’d think he was Sanogo with some of the comments some gooners have made about him😂😂😂. Let’s not forget that worse strikers have played more minutes for this club during the Wenger years

Now that both Laca and Auba are out. We’ll see if Arteta really believe Martinelli is a CF or if that was just another excuse.

Nothing against Eddie, but we will struggle with him playing upfront. He doesn’t fit the play that Arteta wants…he isn’t good at holding it up and and linking play. I’d actually prefer Balogun playing ahead of Eddie. Clearly Prem isn’t being given priority anyway…

“not gonna start talking trash about one of our youngest players, but anyone else’s feeling that nketiah is not up for the task? a few tap ins aside, i fail to see why he earned the promise tag… starting to remind me of sanogo. hope he learns from this though and proves me wrong. coyg”

We told you so