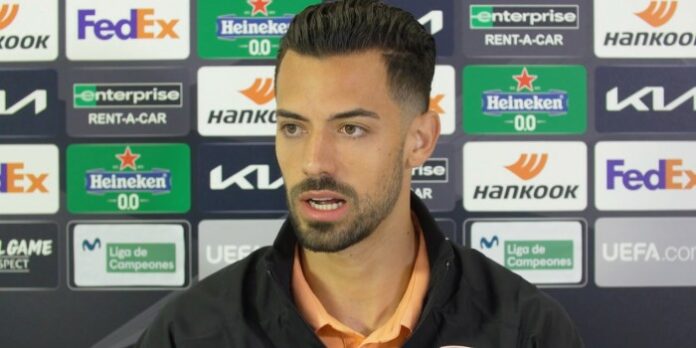 Pablo Mari says he has a strong relationship with Mikel Arteta and that he’s doing everything he can to return the confidence the boss gave to him on his first day.

Having suffered a serious ankle injury in the first game back after the Premier League’s restart in June, the Spanish centre-back was out of action until December. Even though his loan move from Flamengo was made permanent while he was sidelined, it proved to be a very frustrating time for a player who’d arrived off the back of a stellar spell in Brazil.

By and large his game time in the first team since he regained fitness has been positive. Of the 13 games he’s started this season, the Gunners have won nine, drawn two and lost two.

While he’s not necessarily had the run of games he might have liked – a calf injury ruled him out for a month at the turn of the year – he says he gives everything in training so that he can perform when called upon.

Ahead of Thursday’s clash with Villarreal – a side he kept tabs on when he was growing up – Pablo reflected on his first year in north London.

“I had some issues in the last year,” he said. “Most of the time you don’t want to pass through those kind of moments but you never know when they can happen to you, an injury or something. It was a really difficult moment for me.

“Now I take in two or three games more regularly. I think I’m really fit and I feel really strong in the team, I want only to give to the coach the confidence he gave me since the first day.”

He added: “If I’m honest, when you play more games in a row it’s easier for your confidence. When you don’t play and you don’t have regular games, you have to work so hard every day to continue with that level and intensity to put it in the next time. It’s so difficult, I have to tell you. But if you love the sport at the end you have to do.

“I think I show it every time i’m on the pitch, whether it’s for one game or two games in a row or I don’t play for a month, the next game I play, I think I’ve done well and it’s because every day I work hard to do it. I love to be here, I love to work for Arsenal and I’m going to fight with them together until the end.”

It sounds as though Arteta made a real impression on Mari in his early weeks at a time when they were both new to the club.

“My relationship with the coach is really good,” he explained. “Since I’ve come here and I spoke with him on the first day, he explained what he wants from me and how we want to grow with the team and the club. After one year I can tell you that has happened.

“I’m really glad to be here, I’m glad to be his football player and I want to give everything on the pitch to return the confidence he gave to me on the first day. At the end, it’s all about giving everything in every day, not only in games, not only in training, you have to put it in outside of training, in the dressing room, everything.

Shedding light on how close they are, he added: “We speak about everything, about football, our life, our kids, about our Spain, about the weather. Everything. We have a good relationship and I want to keep it like this until the end.”

Arteta has rotated his centre-backs so regularly this season that it’s hard to guess whether Pablo will get the nod for tomorrow’s clash in Spain. One thing is clear, the defender knows exactly how important the game is.

“I think it’s everything,” said. “If we speak about our season, I think we’ve arrived in a moment that we’ve worked so hard to get to. We’ve played games against really good opponents, we’ve won, we’ve passed to the next level and the next step and we are here.

“All our season is about now. I don’t want to put more pressure on ourselves, it’s just football, we have to enjoy it, it’s our job, but it is what it is, a semi-final in the Europa League and we have to win.”

A M
Reply to  ThreadRipper

yup. and he doesn’t mind a bit of shithousing too. him and holding are our best pairing at the moment i think.

He should continue to improve in the coming seasons. I hope he’s given a chance against Unai’s lot.

Sometimes attitude and intelligence on the pitch is more important than athleticism. Mari seems like a really good character to have around the dressing room and to be honest, he’s one of the defenders that doesn’t make me nervous

Pablo Mari is one of my favourite players, I hope he plays tomorrow.

Here’s the guy we need. Paul Onuachu, 6′ 7″, plays striker and Centre Half at the same time;

At the same time? No, thank you.

We’ve had central defenders who would moonlight as strikers for the opposition.

He’s been solid. I’m half hearted whether we should start Gabriel or him.

Chukwueze on their right is VERY fast. It would be good to have cover from Gabriel. OTOH, the Brazilian is too eager and rushing things can be a tad rash.

I think we should be ok with Mari if Tierney is actually fit to play. If not, Xhaka will probably be roasted time and again so in that case it would be better to have the more mobile Gabriel covering him

It pits our fastest LCB against Chukwueze,
It allows Xhaka to go central.
It allows Saka and Martinelli / Smith-Rowe the ability to run and and pin back that flank.
Lastly It allows an outside chance of fielding Smith-Rowe or Odegaard as a false nine with two of Pepe/Martinelli/Balogun and Nketiah drifting into space.

And later in the game, if we need crosses for Eddie, it allows the option of Tierney as an LCB, overlapping Saka and playing with last year’s tactics.

Can someone explain to me why we can’t play him and Gabriel together? Is it because they’re both left footed? Honest question.

The guy is a steady eddy. He isn’t blessed with pace but sometimes it’s the slower defenders have the best positional sense or better anticipation because, well, they have to or they will get done. The goal from the corner was obviously a bit of a hash last night. Was it individual error or collective or just a bad set up? I dunno but also sometimes, when the corner takers gets the ball right where the attacking team are expecting it, it’s impossible to defend. And they did that on that corner plus the clever easing of Holding off the… Read more »