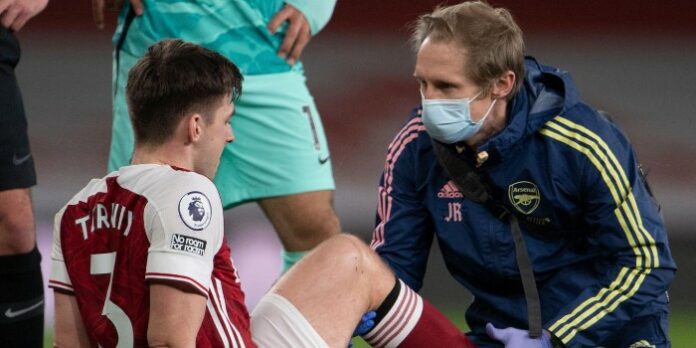 Arsenal have confirmed that Kieran Tierney will be sidelined for between four to six weeks after sustaining ligament damage to his left knee in Saturday’s defeat to Liverpool.

The Scotland international won’t undergo surgery but he will miss the majority of games between now and the end of the season. News of the injury comes as a huge blow for the Gunners who don’t actually have bona fide cover in the left-back position.

Right-footed Cedric is the most obvious option while Bukayo Saka, returning from a hamstring issue, could also move back from his more advanced position. Given David Luiz’s absence for the next few weeks, the boss has some rejigging to do in defence.

Ahead of Thursday’s Europa League quarter-final first-leg clash with Slavia Prague, the Gunners also confirmed that Martin Odegaard is a doubt due to an ankle knock picked up on international duty. The Real Madrid loanee did play against Liverpool at the weekend but was apparently struggling with discomfort.

In better news, Emile Smith Rowe and Granit Xhaka will be available. The England under-21 international has recovered from a hip problem while the Switzerland international is no longer unwell.

Tierney 3 Scotland games in a week. Absolute Joke. The whole International game set up is ludicrous.

The only good news about Thursday is that Slavia appear to have to play their 3rd choice keeper and
2 other top players are out.

We are going to have to really hope that our players gel for the rest of the season. Any more Liverpool performances and we “sleep with the fishes”

Saka and Martinelli back together on the left would be amazing. Lets see what Arteta does.

willian with a sauce of auba

I feared worse I have to be honest…..6 weeks from Saturday (when he got injury) is 15th May. Europa League final is 26th May…everything crossed we will be there & he will be fit. Anything before then would be a massive bonus.

We’ll have to progress through two rounds without him first… 😬But a lot better than I feared as well.

Let’s hope so but it’s getting to the EL final without his input in the medium term and the likes of Odegaard in the shorter term, that could be problematic.

True. I didn’t mean to imply you did, but it’s these kind of injuries to obviously key players (and the tendency to make silly – and expensive – mistakes on the pitch) that could scupper our last chance of having a “successful” season.

When the pundit on my stream said “Kieran Tierney there, this will be his eighth straight game for Arsenal which is a personal best for him” I just thought, thanks for that mate.

It’s basically like saying before that Stoke game, “There’s Aaron Ramsey, and his leg bone has been attached to his foot bone since 1991, which is a massive plus for Arsenal”.

I know jinxes aren’t real. But they definitely kind of are.

Some of it has to be down to the fact certain players don’t ever rest if they’re even half fit in a year where so much football is being crammed in & no real rest over the summer.

At least ESR and Saka are available. That’s good at least. Cedric, time to step forward!

With hindsight, I guess it was only a question of time before Tierney picked up another injury. Undoubtedly one of our most influential players, he’s clearly going to spend a lot of time (more than many) in the treatment room for one reason or another. It’s been that way for his whole (albeit quite short) career both with Celtic and since arriving at The Emirates. Let’s hope he’s fit asap.

This guy is very unlucky when it comes to injuries. It feels like he’s only played about 15 games this season

It does feel a bit that way…..but it’s actually not true. Only one outfield player (Xhaka) has started more games than him this season to date

Yes, but he’s still missed a fair number. For a young player, he does appear to be injury prone – or more injury prone than might be expected anyway.

I am not sure the latest injury was due to any kind of frailty on his part. It was a sideways impact blow to his knee, causing his leg to flex the wrong way. It would injure any player.

So Saka is the “obvious” choice to move to LB, can Gabriel or Mari not play there? I’d rather Saka playing in his best position.

Gabriel – no. Mari – hell no ! He would be completely destroyed at LB. If not Saka, it’s Cedric.

Prefer Saka to play right wing and Cedric to play left back with Pepe ahead of him. I can’t decide between Bellerin or Chambers at right back. Also would still have Auba up front, we cannot afford to have another Ozil situation.

Agreed but that means no ESR (assuming MO starts). I wouldn’t mind saka lb esr on the left and cedric pepe on the right.

I was assuming Odegaard wont start due to injury. That means Saka, ESR and Pepe behind Auba.

yeah that would be my preference in a no odegaard scenario. Just seen Willian got wheeled out to the media so I guess we know who is playing on the left now.

I thought that Soares did ok at left back, improving with each game as and when also I think we’d really miss the influence of Bukayo up front if we switched him and didn’t he play mainly as a wing back anyway.

I think I’d rather have Runarsson there than Mari…

The way his knee buckled after the tackle, I think him coming back in four weeks isn’t so bad. What is very very bad is there is no viable cover.

Playing Saka is the only option and I hope that’s what we do against Slavia. Martinelli ahead of him to run up and down the wing to help his fullback. ESR the natural replacement to Odegaard in the middle. Pepe on the right, Laca up top.

Odegaard looked OK against L´pool – actually the only one in the front line who gave a damn. I guess ESR can fill in. Tierney news are a blow but the last time he got injured it was after playing maybe a little bit too much – ET in a cup game if my memory serves me right. But then again you play your best player and the club is in the position to have only one certified LB

Well that’s some dogshit news. Wishing the lad a speedy and full recovery.

See you next season chaps.

Saka to save the day….again

see you next season chaps. Have a good summer

Nothing short of an heart attack

I agree with Blogs. Saka at left-back. Tierney’s performances show how influential a good left back can be.
Pepe can play the forward-right position.

There goes the season

That went months ago.

4 games in 10 days was too much. Who’d have thought.
Idiotic management of one of our best players, and the only one with no natural replacement. Well done

God it seems like every way Arsenal turns right now we run into another problem. Teirney is an incredible player and leader. We go right from an embarrassing Liverpool game to this. Sometimes being an Arsenal fan is unfair

Great news. Should be back in good time for the Europa League final 👍👍

I can already see him coming back earlier than expected, to than only break down again, like Partey this season. My god, here we go again.

Is there literally anyone with a left foot and some defensive sensibilities from the U23s that could come up? I’m not saying start them all the time, but it would provide us some other options.

Also with Ceballos looking lost, Elneny’s inability to pass forward, and Martin out, isn’t it time we put some young stars in this squad? Hint hint… Azeez.

I was thumbed down when I say we could regret Kola’s exit and here we go… I like Cedric though. He has been decent at worse and sometimes really good (that wonderful assist against Newcastle).

Seems to be a problem for K T getting injury after injury , glad some of us think we can survive in the competition till may with the form were in and look like were getting worse instead of better do we still believe in miracules Up the GUNNERS.

Thankfully Smith-Rowe can go, but losing Tierney is a massive blow especially if Saka isn’t fit. I hope Martinelli will get a chance at left wing and left Auba move up top, don’t want to see him out on the left again with Lacazette up top.

He’s a brilliant player. I think he’s close to being the best left back in the Prem already, after barely a season in the league…a brilliant talent. I love the way he pushes the ball straight to touch before firing in crosses…so old school! His injury record is worrisome though. As critical as the Europa run is to our club future, I hope they don’t rush him back. Better to let him heel up and strengthen his body for next season…