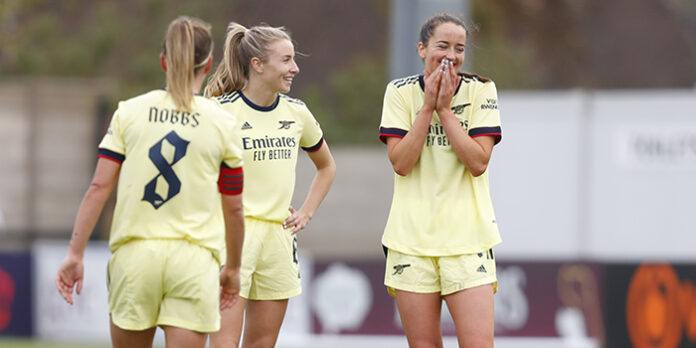 Arsenal Women will play at home to Sp*rs in the FA Cup quarter-finals. The tie will be played on Wednesday, 29th September at Meadow Park. This is a repeat of last season’s quarter-final which the Gunners won 4-0 with a goal from Jordan Nobbs and a hat-trick from Lisa Evans.

The 2020-21 Women’s FA Cup had to be postponed during the winter and the second lockdown in England, due to the number of teams competing in the early rounds who did not meet the UK government’s criteria for elite professional sports teams.

The tournament resumed in April where the Gunners beat Gillingham 10-0 in the 4th Round before defeating Crystal Palace 9-0 in Round Five. After the quarter-finals, the semi-finals will take place on Sunday, 31st October with the final at Wembley Stadium on Sunday, 5th December, which marks the 100th anniversary of the FA’s ban on women’s football in 1921- a ban that lasted for 50 years.

The Gunners have won the tournament 14 times which is a record (fourth tier Southampton are the closest with eight FA Cup wins). For more information on the Women’s FA Cup and its 50-year history, check out a recent edition of the Arsenal Women Arsecast with Tim Stillman and Chris Slegg, author of the recently published ‘A History of the Women’s FA Cup Final.’

https://t.co/drBDhO2gDf NEW! Arsenal Women Arsecast in which I talk to @ChrisSlegg about his and Patricia Gregory’s new book ‘A History of the Women’s FA Cup.’

The Spuds have got even fewer players than we have at the moment. It might need to be 5 a side!

Great tie, perfect choice to stage at the Emirates provided they don’t charge the WFC £100,000 for the privilege and they sell the tickets to fans of the women.

Get it in the Emirates and on the tele. Get some local kids alongside the ticket payers in to help the atmosphere.

And on another note, that yellow kit is just lovely. Best for some time. The colour seems to suit all of the girls.

I hope we keep Vivianne Miedema

Her agent said a day or two ago that “as it looks,” Miedema will be with the team next year. Who knows what exactly has been going on, but think it’s fair to say that the team is in an uncertain state right now with no coach. I’m surprised that Iwabuchi signed when she has no idea, apparently, who the coach is.

Considering Spuds have gone out of their way to stage two women’s NLDs at the Toilet Bowl , this must be the ideal opportunity for the Arsenal to respect their women and stage this game at the Emirates. No procrastination Arsenal. Back the girls.