Everton sprung a surprise with their formation for the visit of Arsenal. They usually rotate between a 4141 out of possession and a 433 in possession. On Sunday, they instead opted for a 541 system, with five centre-halves to block up central areas for the Gunners. I asked Joe Montemurro post-match whether Everton’s shape surprised him.

“It did, yes, we thought they would go 4141 in the defensive phase and use three forward when they had the ball. It really surprised me, they dropped right off and our first goal had to come from a third man run from Katie McCabe.” Here we see their defensive shape in the first minute as Katie McCabe tries to flight a ball into the channel for Caitlin Foord. 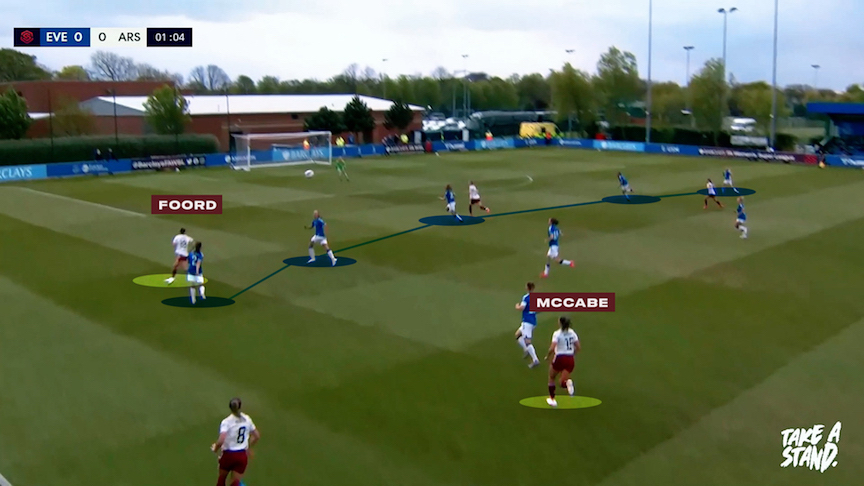 As well as a very solid back five shape, Everton had an equally solid midfield four strung across the pitch. This was a very typical scene in the first half, Arsenal defenders cradling the ball, looking for options among a sea of blue shirts. Hayley Raso is deployed as a lone striker due to her ability to press. Everton’s compactness reduced Kim Little’s influence in the first half. In this shot, there is little point in Williamson passing to Little due to the heavy presence of Everton blue ahead of her. 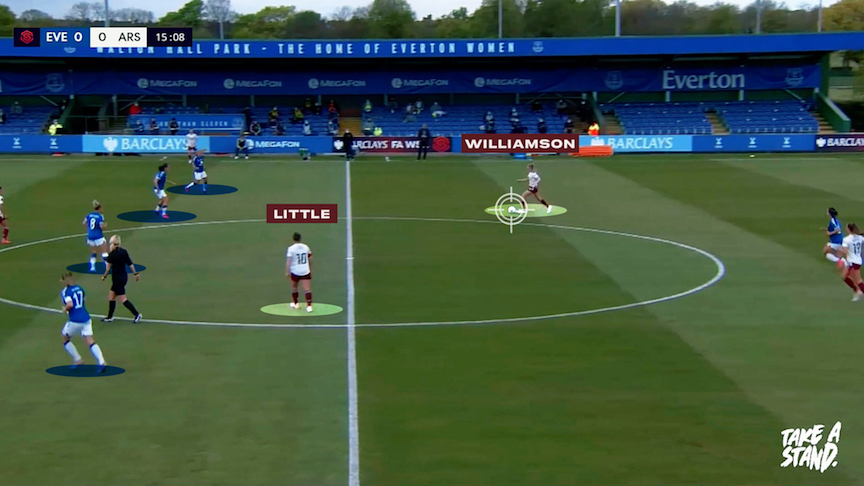 Arsenal again played Vivianne Miedema in the number 10 role but it didn’t work as well as it had against West Ham. The Irons played more of a pressing game and that can make it easier to draw players out of their positions. Other than Raso, nobody in the Everton team is particularly interested in pressing, opting to just hold their shape instead.

In this image we see the entire picture. The only smidgen of space is in the left channel where Miedema is pointing for the ball to be played. Little doesn’t opt for that pass on this occasion but Arsenal do find it a few minutes later. 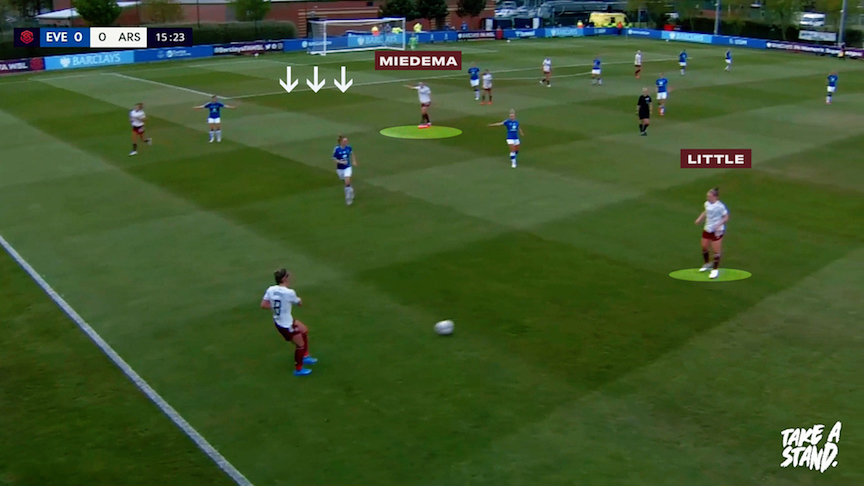 Just a few seconds later that space opens up again and Nobbs runs into it. Jordan and Katie combine on the left as they do so often but the ball just runs out of play as McCabe hits the by-line. You might have noticed that a few passes in that left channel had a bit too much on them in the first half and that is due to a slight slope in that corner of the pitch which caused the ball to roll downhill. 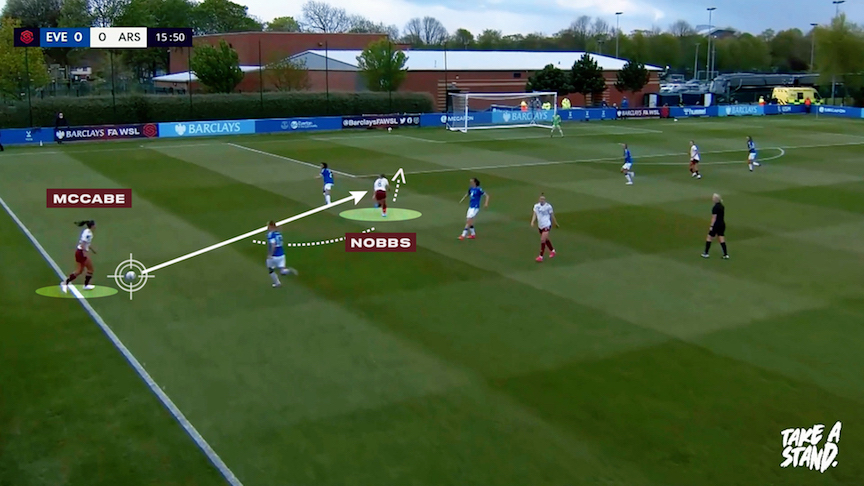 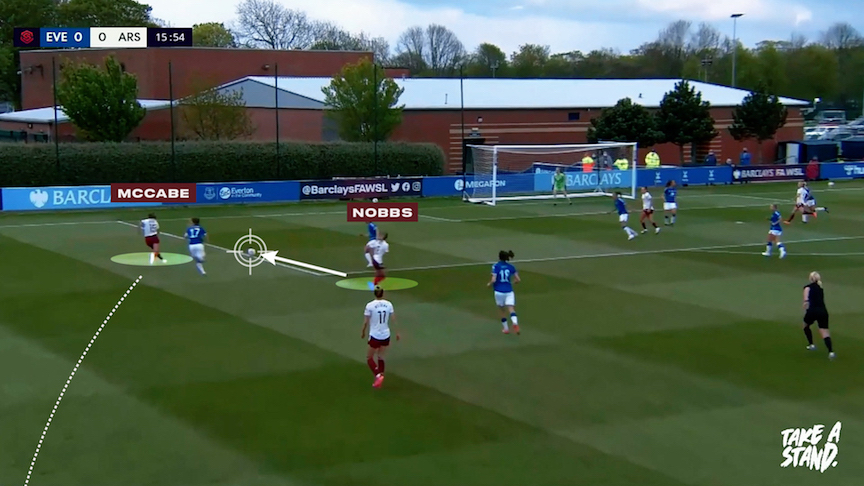 There’s nothing tactically complex about the opening goal, save for Lia Wälti’s left footed pass out of defence- her ability to pass with her left was the reason she was selected ahead of the in-form Lotte Wubben-Moy at centre-half. 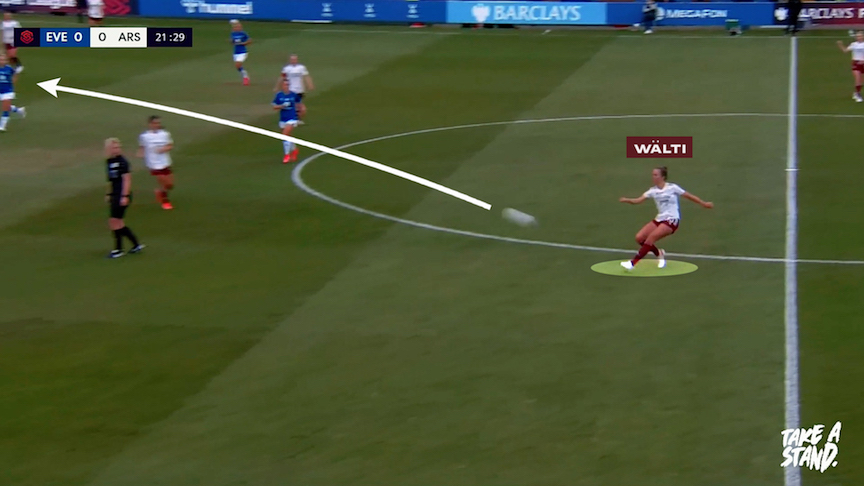 Caitlin Foord just manages to help the ball on and Katie McCabe has crept into that left channel again, the only area of the field the Toffees don’t have heavily guarded. 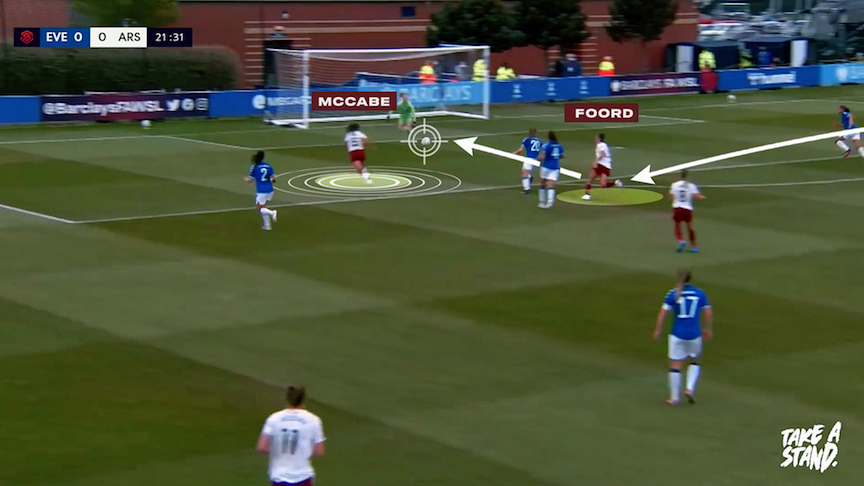 It was fine reward for McCabe who has, undoubtedly in my mind, been Arsenal’s player of the season.

Everton changed things significantly in the second half. Nicoline Sorensen comes on for Lucy Graham and Willie Kirk switches to the 4141 formation Arsenal are expecting. Immediately as the second half kicks off, we can see their altered intent to press and harry Arsenal higher up the pitch. Their positioning becomes much more aggressive. 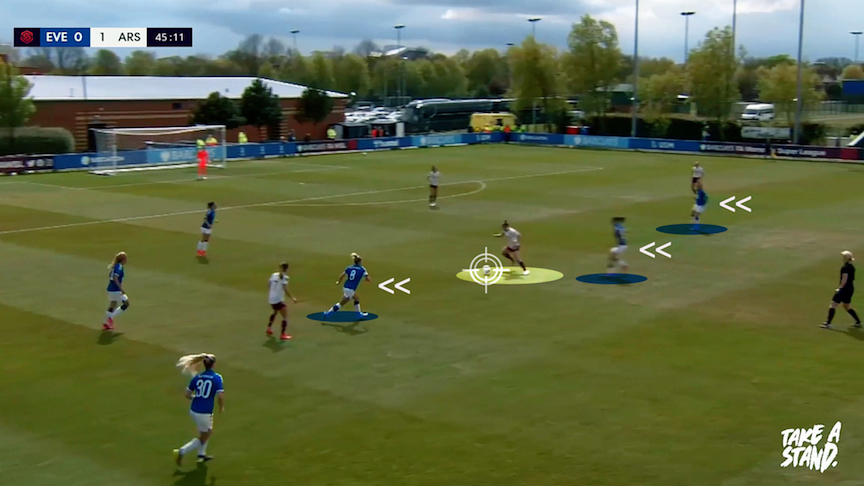 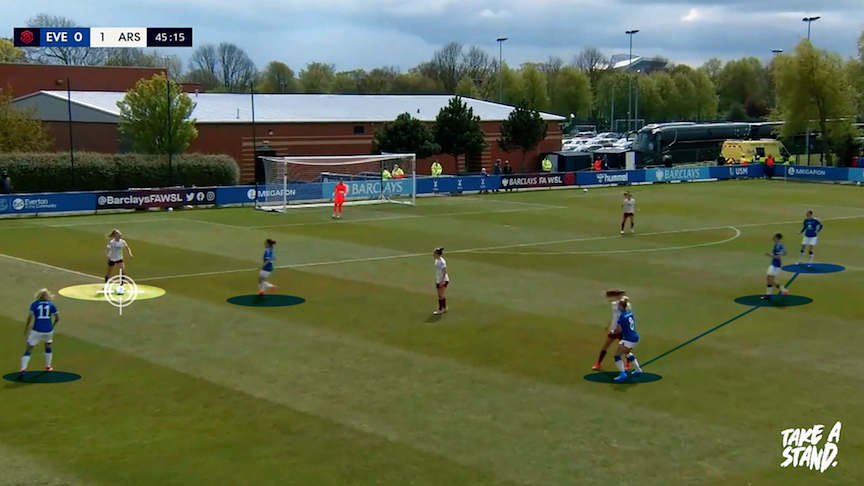 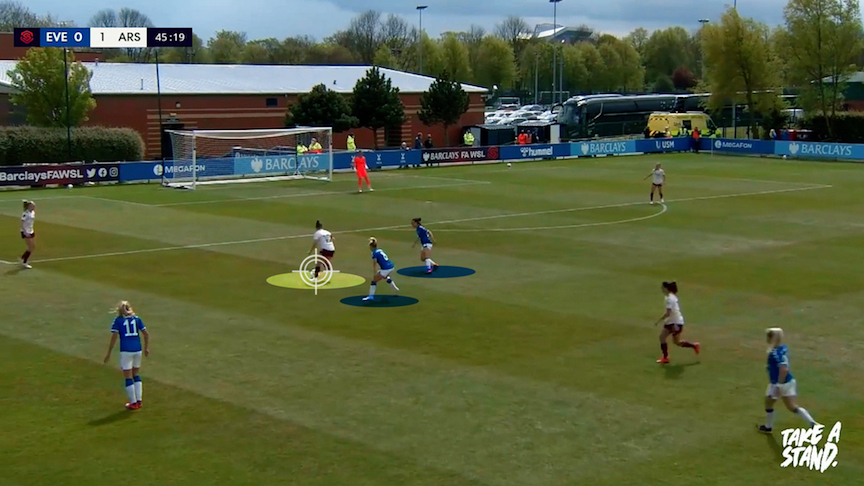 It was a smart move from Willie Kirk, both Brighton and West Ham tried to be more aggressive in their positioning against Arsenal and both teams were undone in the second half, largely due to fatigue. Everton stored up their energy for a second half push and were nearly rewarded with a point.

Joe’s response was to slightly change the shape when Arsenal had the ball. Around fifteen minutes into the second half, I heard him tell Lia Wälti “442 in build-up with Kim popping out.” That means Miedema pushed up alongside Foord , van de Donk continued her wandering berth in central midfield where she had license to peel out towards the right flank to find space. Kim pushed on slightly and this was to try to coax Everton’s defence out of shape. Look at the position Kim is picking up now with Wälti on the ball, she has placed herself behind Everton’s midfield instead of in front of it. 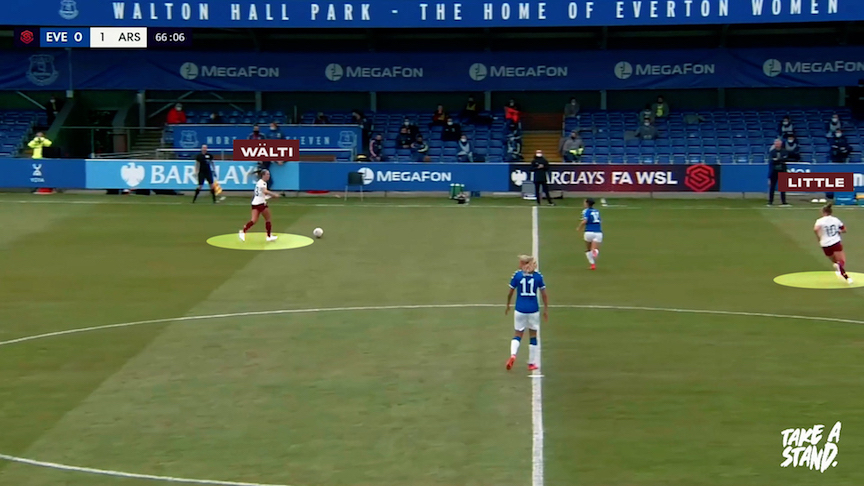 However, in truth, Arsenal, fatigued by two tough games in quick succession ahead of this one, had subconsciously settled on the 1-0. It was Everton’s equaliser that really triggered them into action. By now, Jill Roord and Steph Catley are on with Katie McCabe moving into a left wing position. Here we see Kim Little again, positioning herself between Sorensen and Christiansen on the edge of the Everton box, trying to tempt one of them out of their shape. This sums up the pattern of the game at this point, the Toffees have retreated again and Arsenal are pushing hard for a late winner. 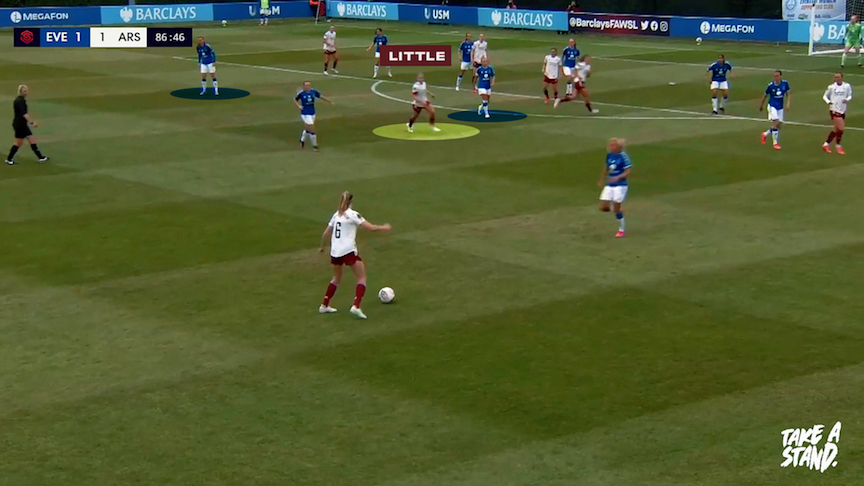 And again as Arsenal try to build here, Kim is pushed much further on with van de Donk looking to find space in the channels and evade her markers. Little and van de Donk are trying to find angles to distort Everton’s shape. 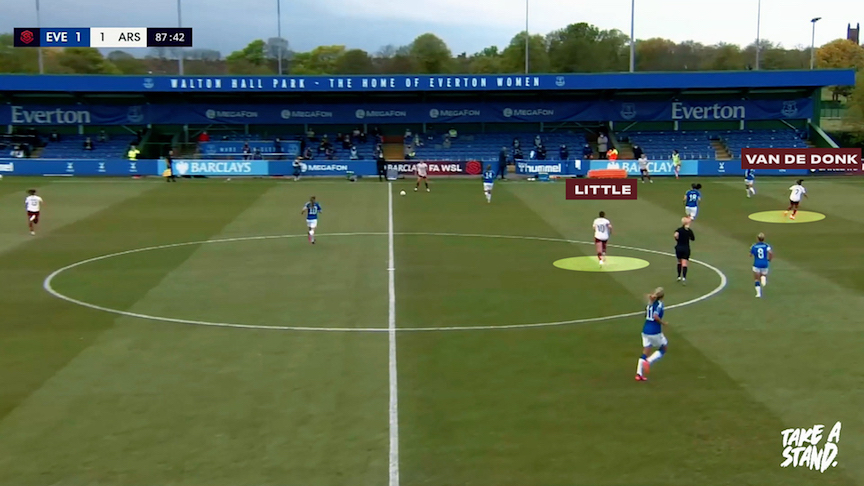 Constantly now we are seeing Kim in much more advanced positions where Everton aren’t expecting her to be. 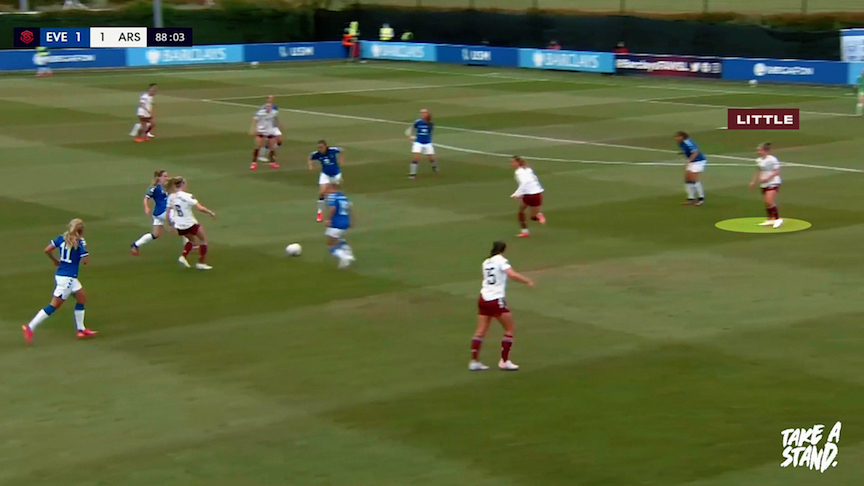 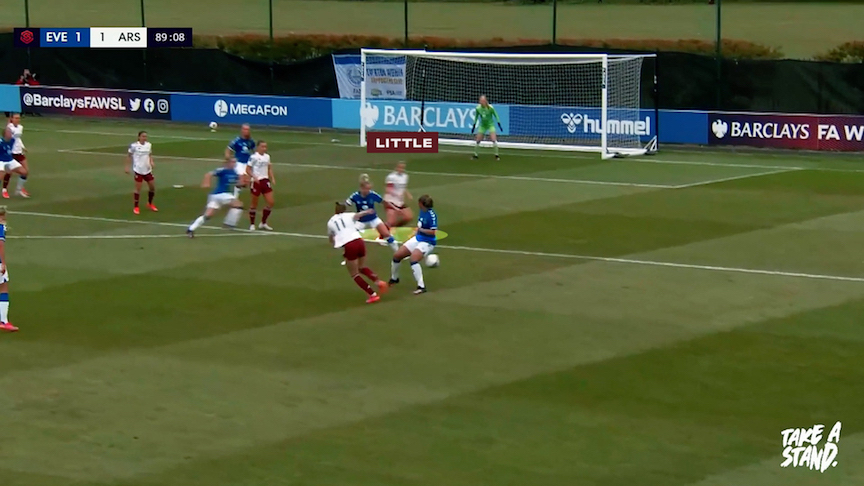 Even in this clever stoppage time free-kick routine, with Everton expecting McCabe to shoot, Kim creeps forward into some space. 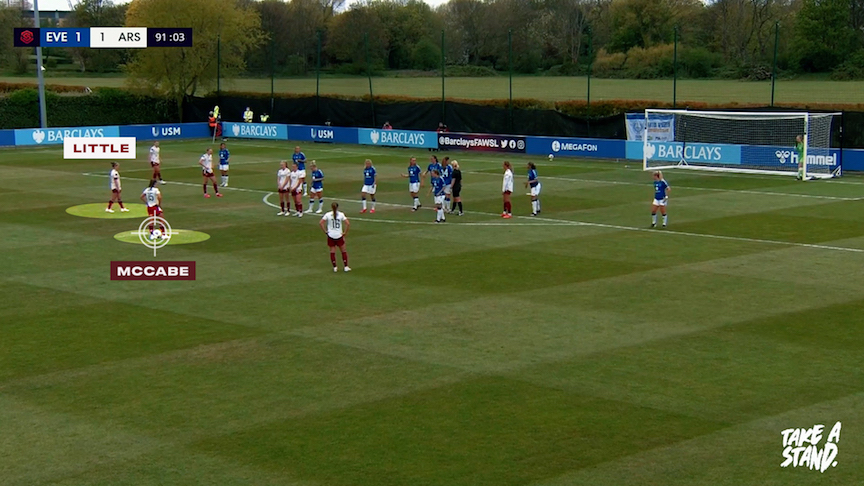 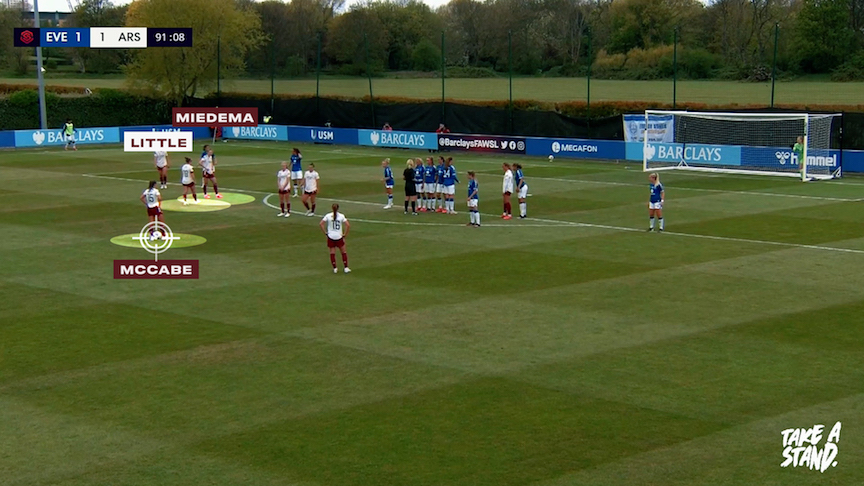 Look at how Miedema just moves to her left, taking two markers with her to make the gap wider for Kim to walk into. Alas, Kim’s shot is straight at McIver but it’s a clever routine and another example of how Little’s movement began to fox Everton. 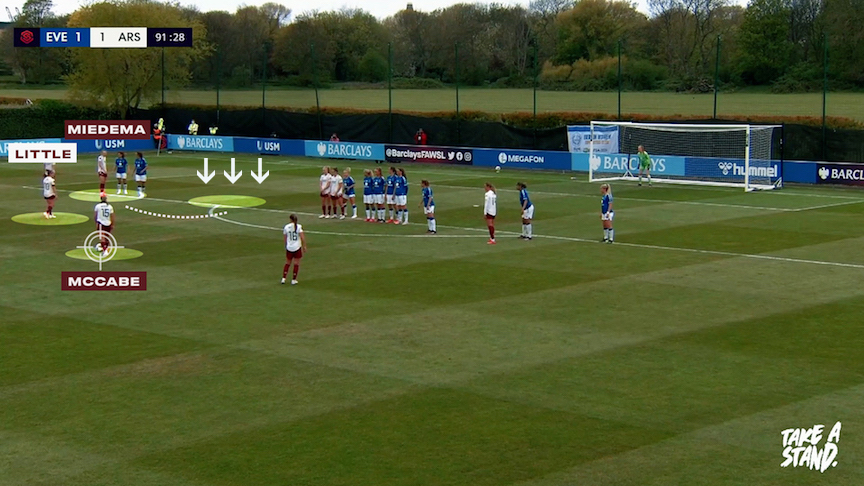 In the move that leads to the stoppage time penalty, it is Little who wins the ball back high up the pitch, nipping in front of Gabby George to intercept Christiansen’s pass to find Jill Roord. 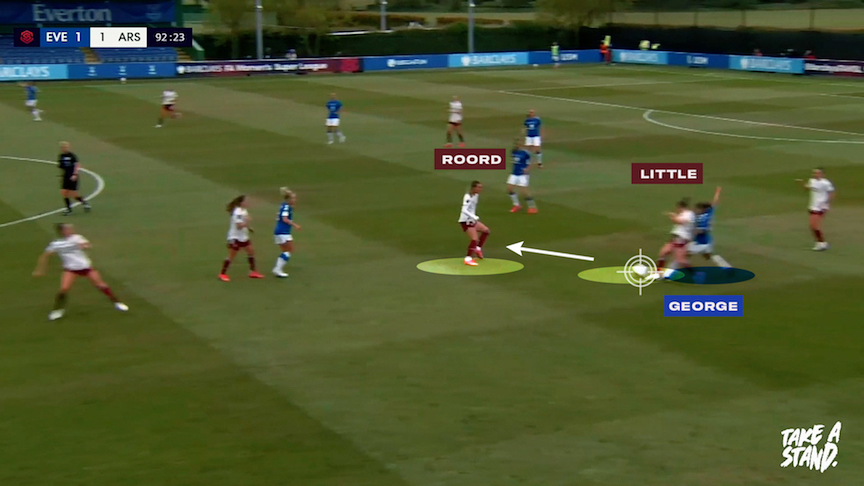 Everton have lost their shape and panic, Roord finds Miedema, who spins a lovely pass to McCabe on the left. Megan Finnigan can see that the situation is desperate and she makes a tired challenge that gives the Gunners their last second spot-kick. 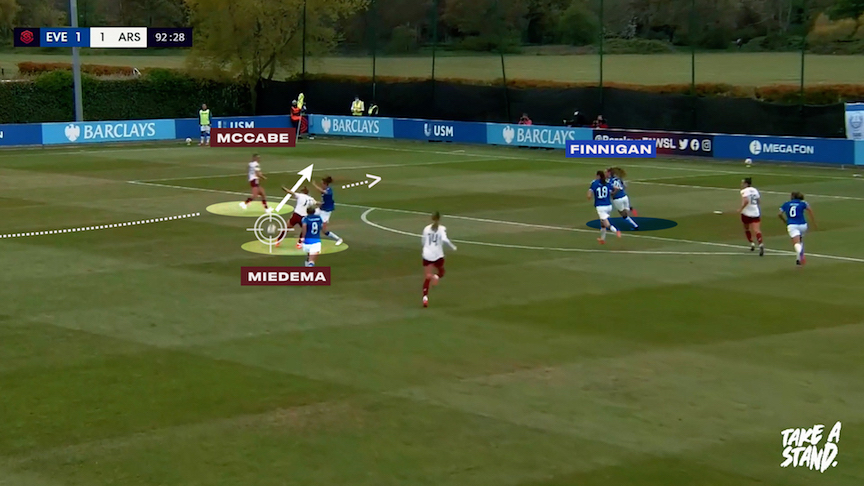 The penalty itself was a masterclass in grace under fire, steering the ball into the top corner and steering Arsenal back into the Champions League in the process.

Kim Little sending Arsenal to the Champions League – you LOVE to see it😍 pic.twitter.com/peciOzMPdN

Previous articleArteta: I love Gabi more than all of you
Next articleHenry backs Ek takeover, reveals talks with AST

The women deserve much more coverage than they receive. Thank you for this contribution. #GTID

Viv The 🐐
Reply to  Lisa Tarker

Real Arsenal FC as I call them. Without them, I wouldn’t have stopped crying about Arsenal.

Well anything can happen

Kim’s too good for the men’s team!

Fascinating to see the game broken down like this. Cheers, Tim.
I was nervous before the penalty was taken but you could see that Kim was already in the zone and nothing would break her concentration. She is a proper captain – never gives up and never panics.

“Little Trouble for Everton”. LOL. My initial reaction was one of cognitive dissonance- “huh, Arsenal won, but Everton had little trouble? ” Then I wondered if this was another British phrase like “he did just about enough to block the shot” or “he took his chance” that causes yanks to scratch their heads? Then it occurred to me- a pun. Well, the headline worked. I read the story and confirmed. Nicely done coverage, as well. Good for the women qualifying. Hasn’t been the most successful of seasons, but they knew qualifying was still possible a month ago by winning all… Read more »

Might still win this season’s FA Cup yet; next year!