Joe Montemurro started with Jordan Nobbs and Beth Mead in the wide positions against West Ham United on Wednesday with Caitlin Foord upfront and Vivianne Miedema in a more withdrawn role. Joe Montemurro started with this front four in the 4-0 victory over Birmingham City in March. I asked Joe why he opted for this system again against Olli Harder’s hard pressing West Ham side.

“West Ham play with a back five and their three centre-halves pretty much stay so what we tried to do was to play more centrally and draw out their wing-backs, so Viv could come short, pick the ball up and change the point of attack. Their wing-backs pushed onto our full-backs but that gave space for our wingers to run in behind.”

Essentially this turned Arsenal’s fluid 433 formation into a variation between 4231 off the ball, morphing into a 4141 with Kim Little leaving the double pivot to join the attack when Arsenal went forward. A front four of Mead, Nobbs, Miedema and Foord is a very direct forward line, with Jill Roord and van de Donk on the bench.

The purpose of playing Miedema in a withdrawn role was two-fold. The first principle is that, in a deeper role, Miedema can attract one of West Ham’s centre-halves away from their area and create space for Mead, Nobbs and Foord. Here, Leah Williamson finds Miedema in a deep position and Cissoko is attracted away from her area to meet Miedema. 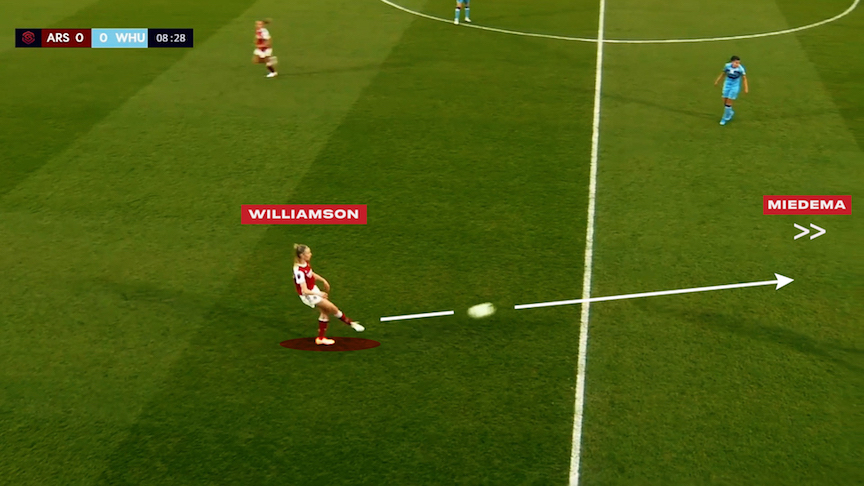 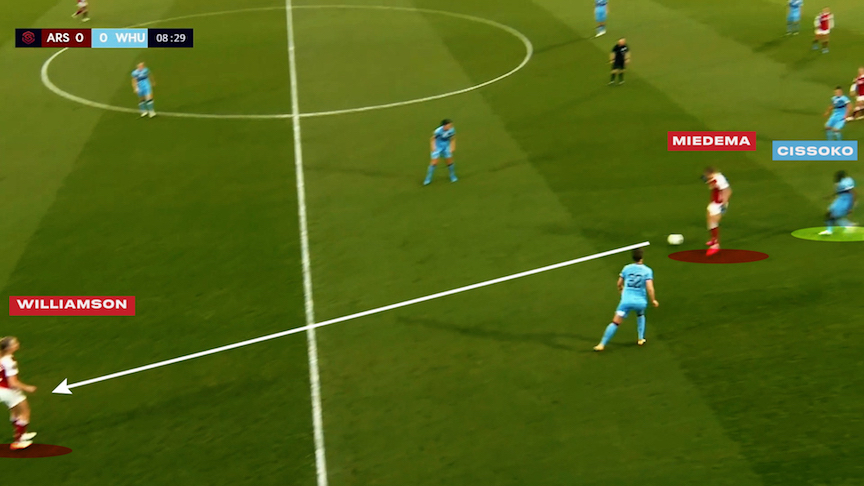 Having attracted Cissoko away from the defensive line, Miedema drops the ball back to Williamson, who now looks to play the ball towards the Irons area quickly before Cissoko can get back. 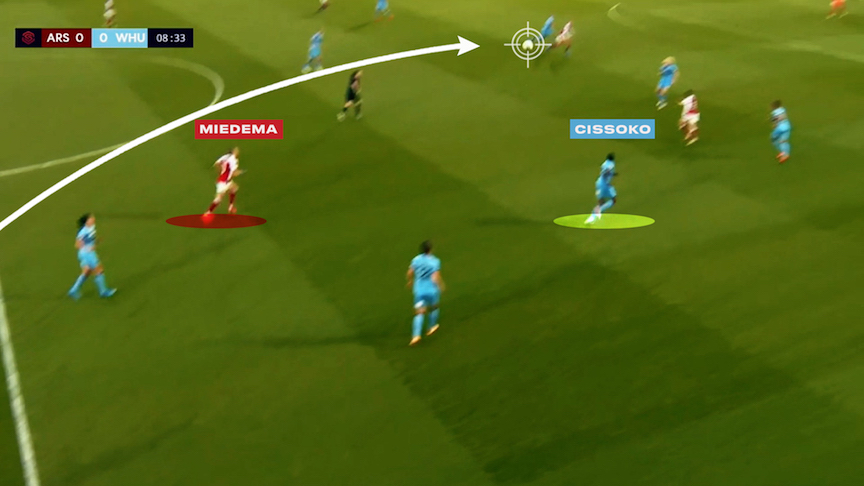 It doesn’t quite work on this occasion as Fisk intercepts the long pass but you can see the space that has been created if the pass has a little more elevation on it and finds Foord. West Ham’s right wing-back, Kvamme, is not even in the picture because she is pressed onto McCabe, which explains why Nobbs has so much space in this image. Hence, Joe’s comment, “Their wing-backs pushed onto our full-backs but that gave space for our wingers to run in behind.” 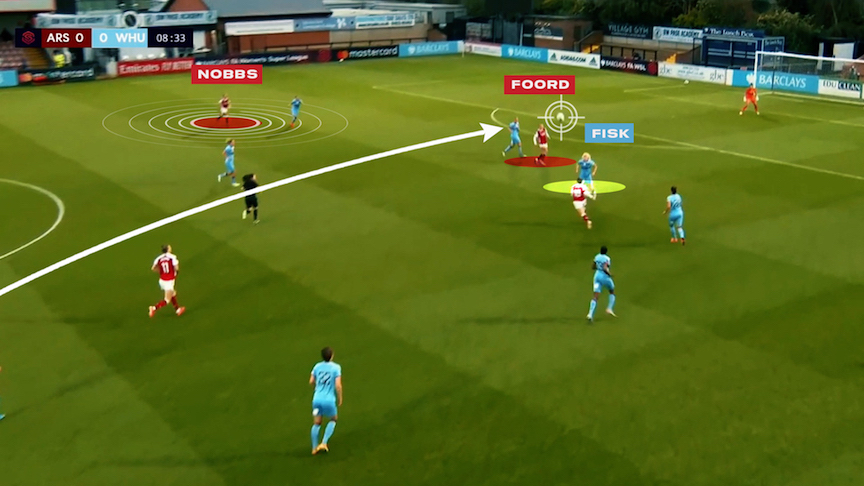 The second principle of playing Miedema in a deeper role is simpler. If the West Ham centre-halves aren’t attracted out of their position, then Miedema has space to work with. West Ham either abandon their man-marking strategy and allow Viv room or else one of their centre-halves comes out to meet her and potentially leaves room for Nobbs, Mead and Foord.

We know that Vivianne Miedeme can do many things with space, be it shots on goal or creating shots for others. Look what happens here as Cissoko clears the ball for West Ham with Miedema clear of the front line, she is standing in space. Cissoko miscues the clearance and Miedema is on hand to pick up the pieces. 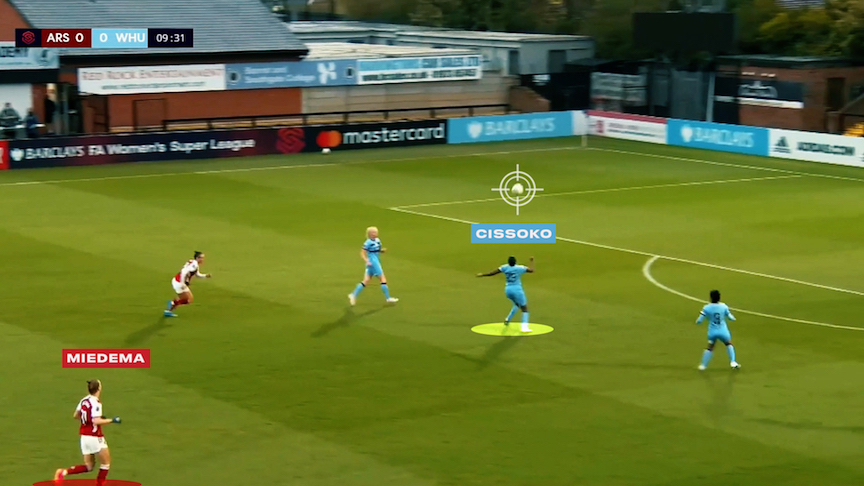 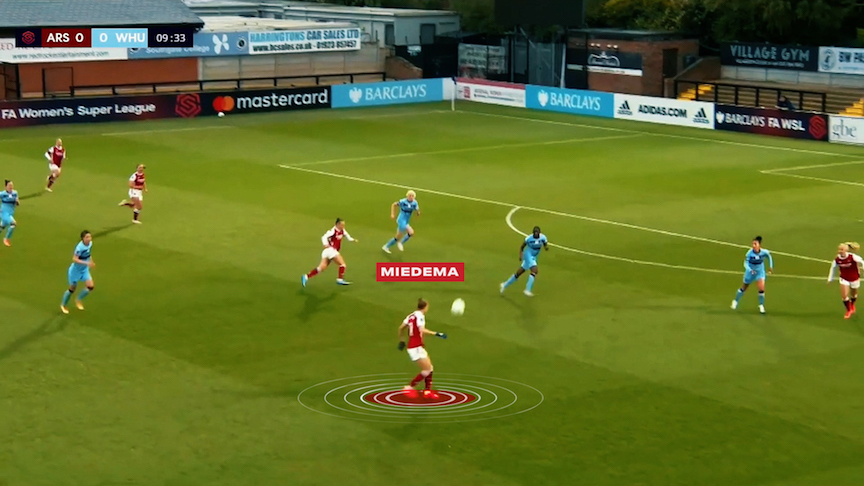 We know by now that Miedema is adept with a through ball, particularly a flighted through ball. She drifts the ball into the area for McCabe, who has continued her run away from the left-back spot and into the area, where she just slashes her shot wide. 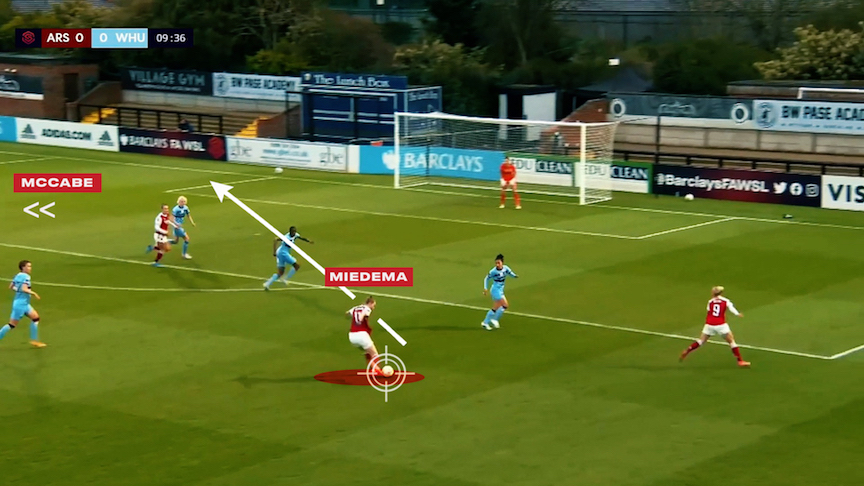 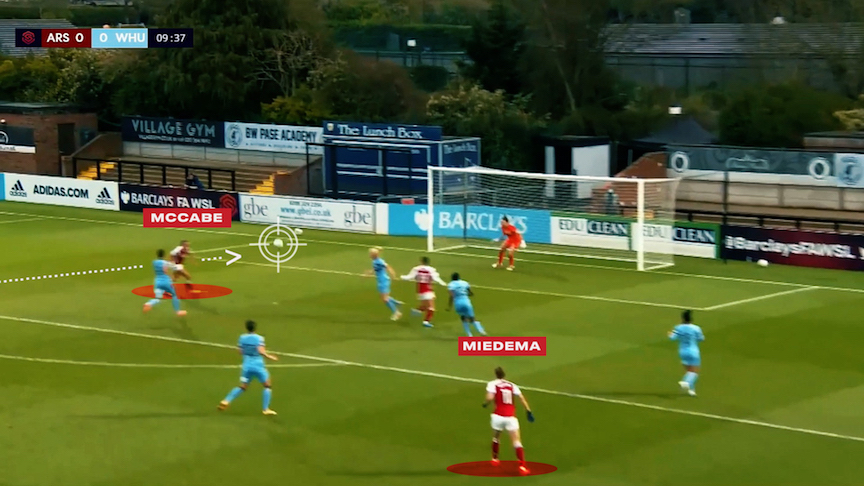 Miedema’s presence also gave Arsenal an exit strategy from goal-kicks if they needed it. Here, her role becomes almost akin to the one Harry Kane has played for Spurs this season (sorry!) As Lydia Williams collects the ball here, both Leah Williamson (slightly out of shot) and Lia Wälti are closely marked, limiting her options for a short pass. 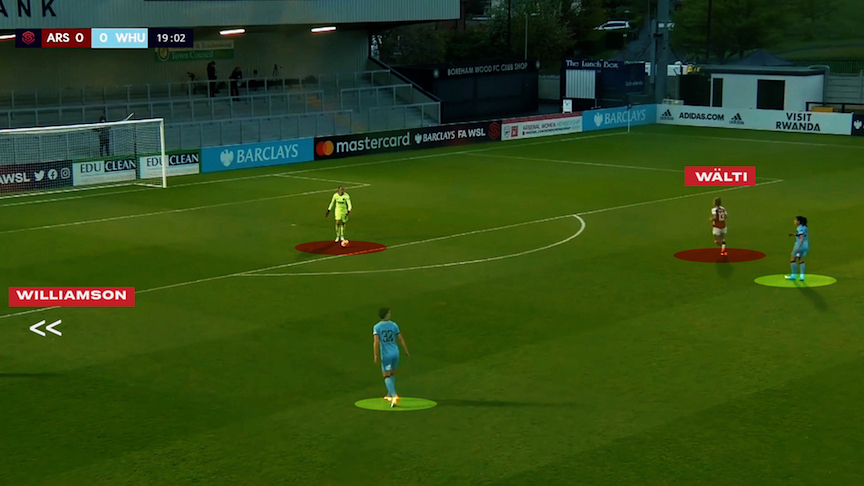 However, with Williamson moving wide to the right, a gap has been created in the centre of the pitch, which Miedema drops into to collect the pass from Williams. 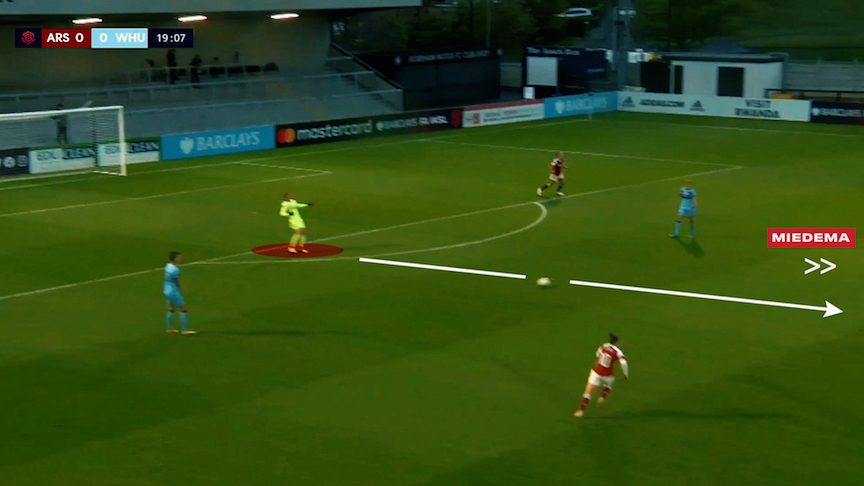 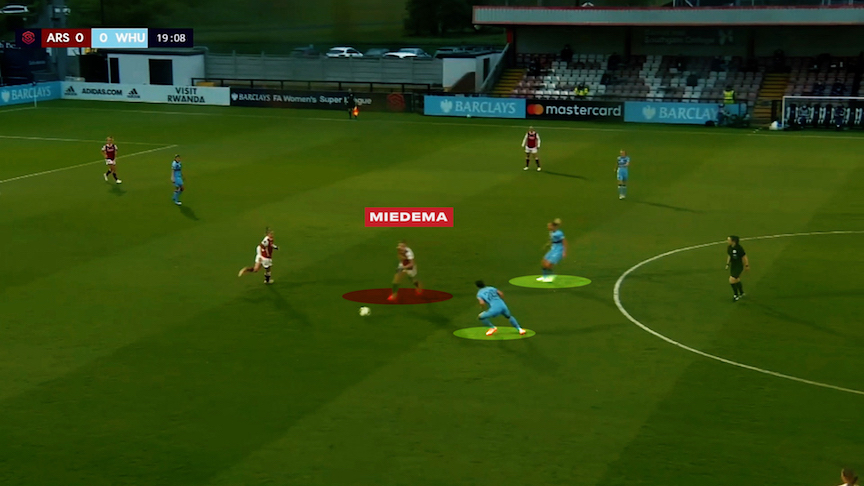 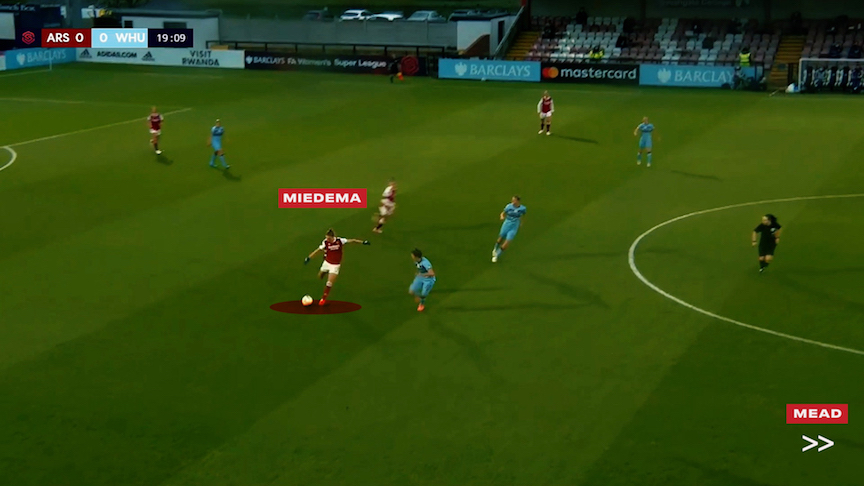 Unfortunately, the pass just has a little too much on it for Mead but look at the space that has been opened up by Viv dropping deep, attracting players and quickly changing the point of attack. If Mead can latch onto this pass, there are good options for a low cross into the West Ham area. 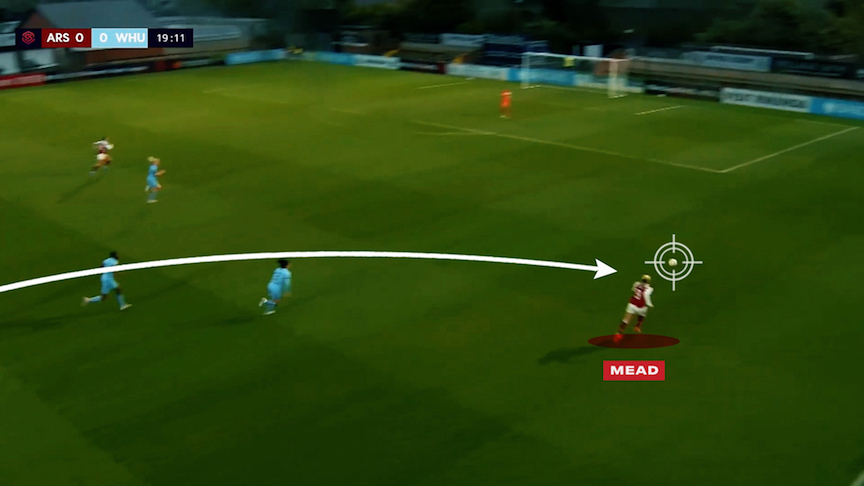 There is little point in breaking down Miedema’s goal beyond admiring its quality and pointing out the similarity to the goal she scored away at Birmingham in March, when she last played in this withdrawn role. Viv is often a release valve for throw ins, as pointed out in the Brighton analysis piece, due to her ability to fend off opponents and protect the ball.

You’ll recall from the analysis of the Birmingham City game, where this front four was utilised, that it enabled Arsenal to be direct with long passes from Leah Williamson, an attractive option given West Ham’s man-to-man pressing system. Here we see that Lydia Williams has no short options to distribute with West Ham closely marking. 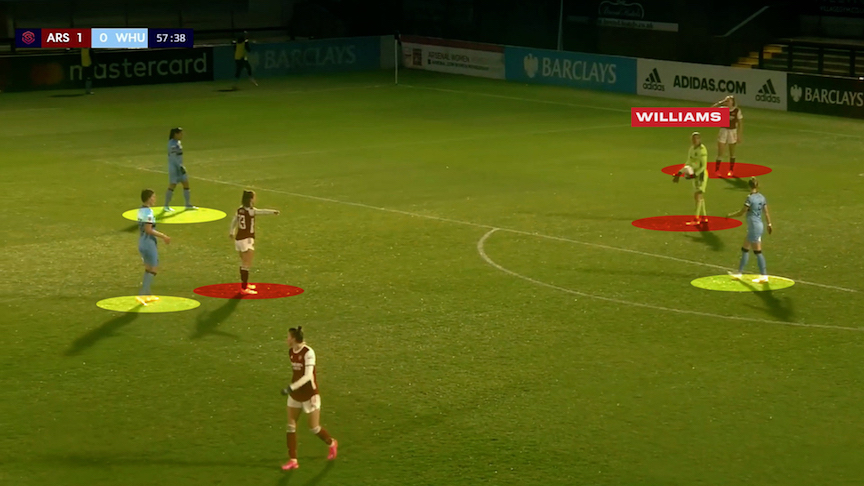 It leaves her with little option but to go long and this is where having Caitlin Foord as a centre-forward is really helpful because of her ability to protect the ball. Williams finds her compatriot, who shields the ball and touches it back to Kim Little so Arsenal can build an attack. 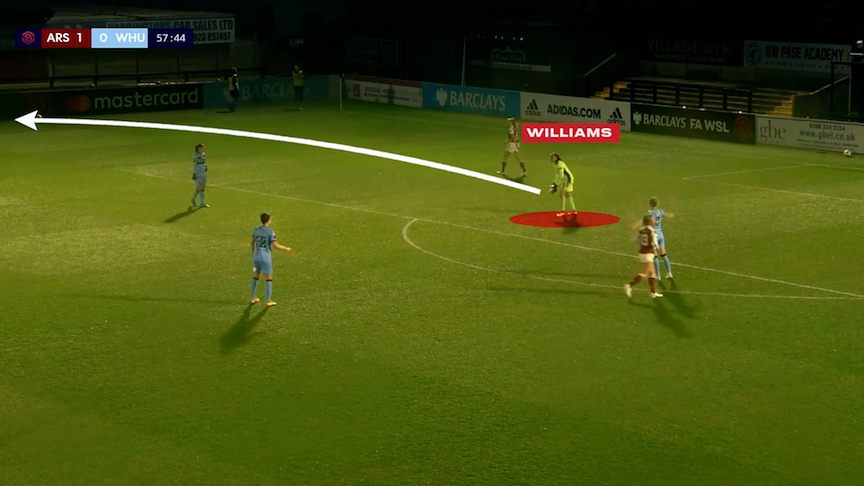 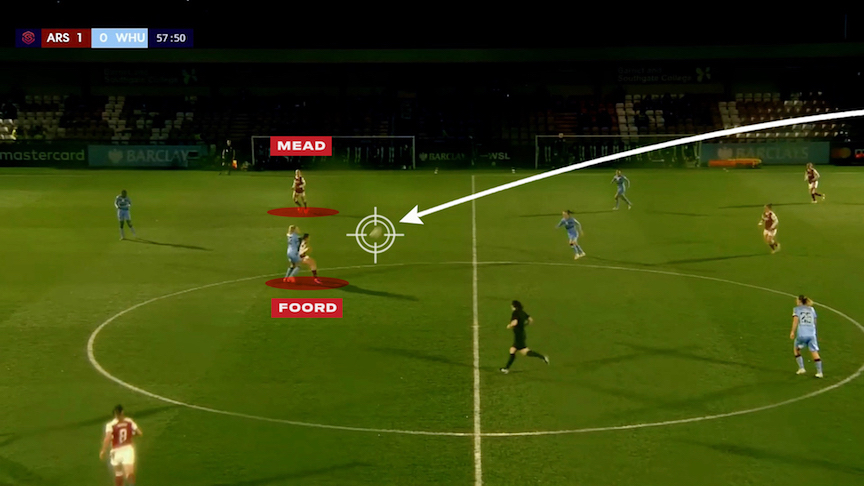 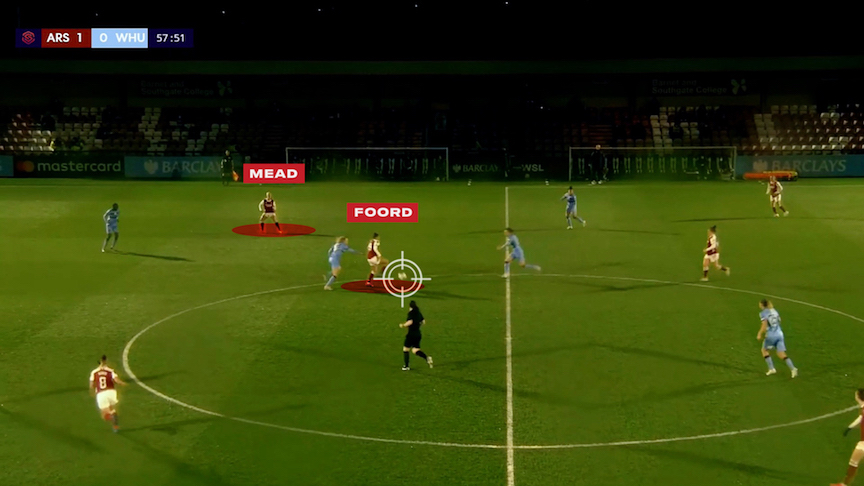 The game became stretched in the second half as West Ham looked for an equaliser and Miedema’s influence grew. Here, Wälti and Little have successfully played out from the back and attracted the West Ham press and Miedema has picked up a typical no.10 position between the lines. 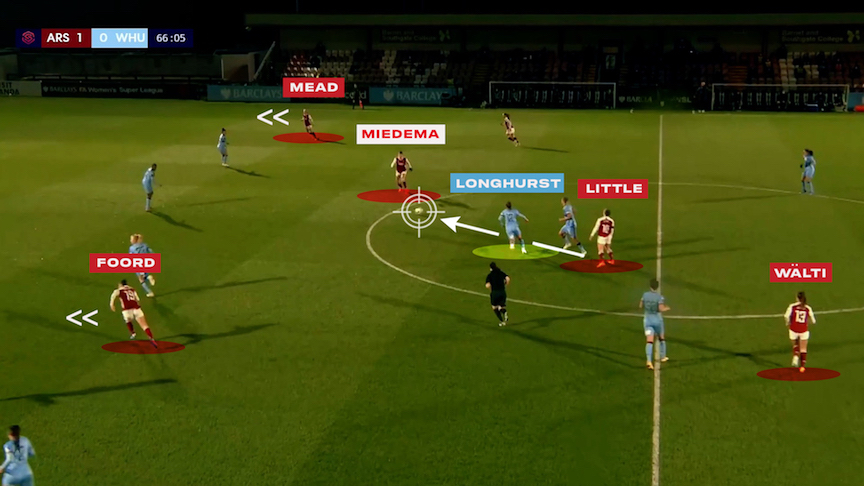 We can already see that Foord and Mead have taken the cue to run in behind and Katie Longhurst can already see the picture that has developed and that she has been sucked in towards Little. Cissoko gets attracted away from her area to try to meet Miedema but the effort is in vain and Miedema releases Mead with a wonderful slide-rule pass. 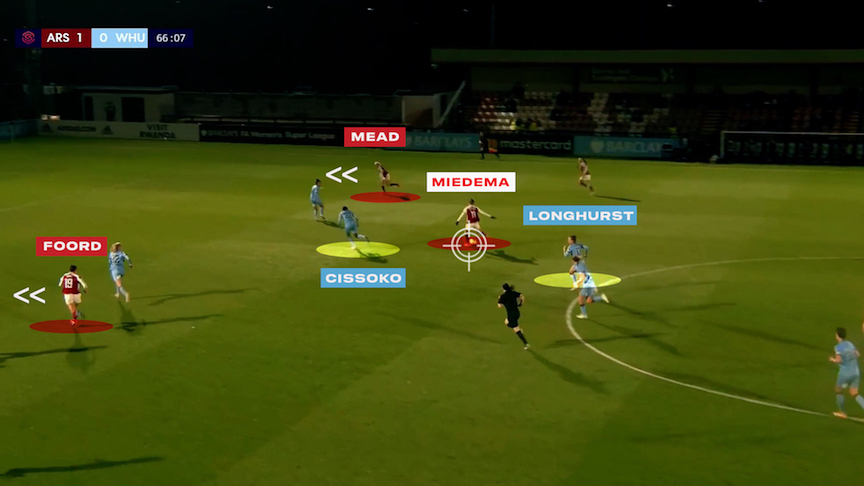 Mead tries to put a chance on a plate for Foord but Fisk, to her credit, is alive to the danger and cuts it out. 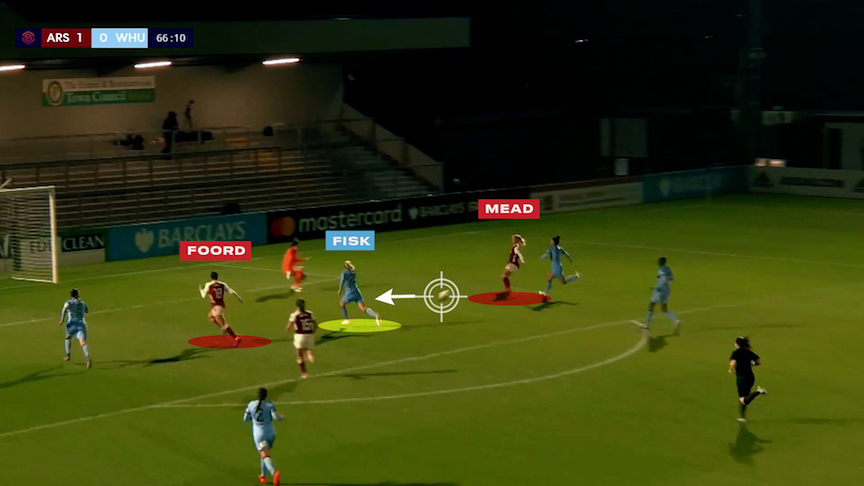 TL;DR- Vivianne Miedema does lots of things to a very, very high level and Joe Montemurro asked her to do some slightly different things to usual which she happens to be really, really good at.

So will she still be an Arsenal player next season?

Her contract isn’t up until the end of next season so probably yes. I think Arsenal will rather keep her than sell her for a fee. The question is whether she’ll resign to stay longer than the 1 upcoming season…

Viv The 🐐
Reply to  Marieke

So pray with me for a contract extension. Nothing wakes me up at night, like me realising Viv did not extent her contract till now.

Xuan
Reply to  Viv The 🐐

Not too optimistic, but let us see.

I’d like to see Arsenal go after Bordeaux’s Bunny Shaw, and pair her with Miedema. That would be a wow pairing. Shaw, like Miedema, can do it all. Her size and hold-up skills would be a big help against hard-pressing teams, and trying to defend against her, Miedema and Arsenal’s other scoring threats would be a nightmare for opponents. And Bordeaux has apparently got financial problems–the owner doesn’t want to fund the team any longer, I hear. Miedema is asked to do practically everything for Arsenal, which is rather odd on a team with lots of talent. It is evidence… Read more »

Alas, Shaw is going to Manchester City. Arsenal have Foord in double figures, the big shame is that Jordan hasn’t been fit more often because she’s mapping at about a goal every 1.5 games at the moment. We need more goals from Roord really, she has ten but they were only scored in four games.

Love this, as always! Are you never afraid that we might give a little bit too much away about our tactics?

Heh, nah other teams all have analysts who will see this stuff and plenty more! Besides which, Joe tailors game plans for each opponent and this is all after the fact.