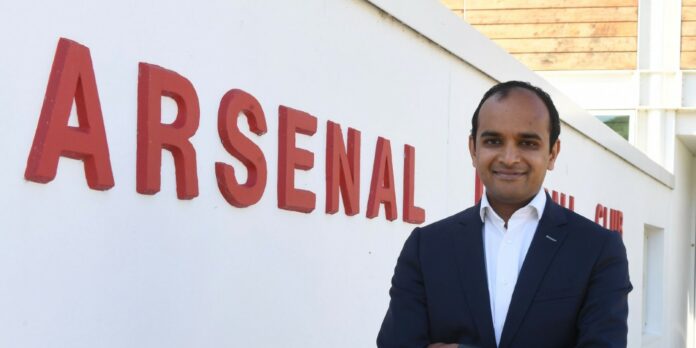 According to Sky Sports, Arsenal CEO Vinai Venkatesham has stood down from his Premier League role on the Club Strategic Advisory Group (CSAG) following the Gunners part in the failed plan to launch a European Super League.

Venkatesham, who resigned his place on the board of the European Club Association in the midst of the drama, has reportedly left the position following pressure from Premier League CEO Richard Masters.

Officials from four of the five English clubs involved in the proposed breakaway have resigned from other roles within the organisation.

Chelsea’s Bruce Buck has exited the Audit and Remuneration Committee, Manchester United’s Ed Woodward and Liverpool’s Tom Werner have stood down from the Club Broadcast Advisory Group, while Manchester City’s Ferran Soriano, like Venkatesham, will no longer play a part in the CSAG. Sp*rs didn’t have anyone fulfilling a position of note.

It remains to be seen what punishment, if any, will be imposed on the ‘Big Six’ by the 14 other sides in the top flight. An investigation into their behaviour is ongoing.

As The Athletic (£) reported earlier this week, the situation has forced the Premier League to prematurely part ways with its director of football Richard Garlick, presumably due to a conflict of interests. The qualified solicitor, who specialises in sports law, is due to join Arsenal as our head of football operations later this year.

Even “Big Six” is debatable at the moment…

Well, Sp*rs are a bigger club financially (on turnover, for the last set of results 2019-20) than we are so, as always, it depends on the criteria used. As a matter of fact we came out bottom of the “Big 6” on that measure. Obviously finance was a key one for ESL founder member status which is why they were invited (clearly not for trophies won, of course).

BBC are reporting this as being forced out. However it doesn’t matter.

One silver lining maybe is KSE is reported to be sanctioning a higher spend in the transfer window.

I hope we win the EL and can meaningfully and with a coherent recruitment strategy!

Too much of day dreaming above. So here is back to reality- hope we play a good game this evening.

No choice. As the article mentions representatives from the six English clubs on league or European bodies have had to do likewise.

Will there be any other sanctions? Who knows. It’s clear from his comments recently that Perez at Real Madrid doesn’t think the ESL (in some form anyway) is a dead duck. He’s no fool so I we’ll have to watch this space a while longer than we thought or hoped.

Reports suggest Perez is surrounded by yes men so he may actually be a bit deluded. Another theory is that the clubs yet to withdraw want to divide the early termination fees among themselves (and those clubs really need the money, so it kind of makes sense). But there’s also something about having to have withdrawn by a date in July, so let’s wait and see what happens in the next couple of months.

Yes, waiting and seeing is obviously (and often) the best policy here. As to Perez being deluded, well there was an excellent report on the BBC Sports website about him only a few days ago. The image I got from that was certainly not of someone deluded, but rather a skillful “behind the scenes” operator adept at pulling a trick or two out of the bag. Again, best to wait and see.

You don’t run Real Madrid for this long if you are deluded. He is probably the personification of a fox.

The articles I read suggest he’s very powerful/influential (especially in Spain), so he’s the kind of person who can say something and his acolytes do everything to make it happen, no matter how unrealistic it may be. So yes, he’s good at what he does, but it’s possible he’s overextended himself trying to pull something this big beyond the realms of Spanish football.

Yes, I think that’s true. Clearly he hasn’t become the “power” (forget Zidane, or any coach there) at possibly the biggest club in the world if you’re not a slick operator. I’m certainly not supporting him over the ESL but if he’s indicating that it’s not over yet, we have to at least take note.

Why does he have so many roles? Unless these roles benefit Arsenal directly in any way, do the role at Arsenal first.

It’s all about clubs getting “their” people onto these various boards and groups as a profile/prestige thing for the club. I’m sure that the individuals concerned are capable of fitting in a (very) part-time role or perhaps two in addition to their “day job” at the club itself. Arsenal’s previous representation has, for example, included our former vice-chairman David Dein, who was also at various times vice-chairman of the FA and president (I think) of the G14 group of European clubs – touted in it’s day as a “potential” ESL. So it’s nothing new, although it doesn’t look like we’re… Read more »

They’ll be stepping down from their clubs too. They have to.

Only because without those positions of influence, they’re now a bit more pointless (for lack of a better word) to their clubs than they were before all this. But in many cases they’re just the fall guys. It’s hard to think Vinai, for instance, was doing his own bidding participating in those meetings. Not that he necessarily thought the Super League was a bad idea, but he wasn’t acting at his own behest.

He certainly wasn’t doing his own bidding – that wouldn’t work at all. He was there to help facilitate the smooth running/operation of the group – and, quietly, to keep an eye on any developments arising from the group that may have an effect on Arsenal FC.

This made my evening “Sp*rs didn’t have anyone fulfilling a position of note”. It’s good to know somethings are still consistent, 😂😂😂😂😂

We should probably hand Vinai Venkatesham his P45

Far too drippy for my liking

First step towards kroenke out. Keep up these protests gunner fans