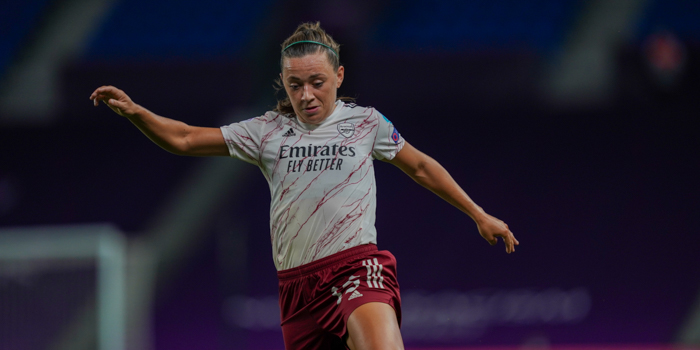 Arsenal left-back Katie McCabe has signed a new contract with the club. The 25-year old joined the Gunners from Shelbourne in 2015 and spent a successful spell on loan at Glasgow City in 2017. Since returning to the club, McCabe has gone from strength to strength.

Nobody played more minutes for Arsenal during their 2018-19 campaign. In 2019-20 she moved to left-back, where she has again excelled this season, providing an outstanding 12 assists from full-back during this season. McCabe should be a leading contender for Arsenal’s player of the season award.

The Ireland captain has decided to extend her stay in North London, telling Arsenal.com, “I’m absolutely delighted. I love this club and I feel like we’re in a really good place and that we’re ready to push on. I’m delighted it got done and now I’m ready to kick on and help this club win more trophies.

“It’s been amazing ever since I joined the club. There’s been ups and downs along the way, but I feel like I’m in a really good place with the team that we’ve got, the players we’ve got and all the staff behind the scenes. I’m really happy to commit my future.”

“Katie McCabe is one of the highlights of the last three or four years here.” Joe Montemurro said. “It’s been a project which has been an exciting one. She’s been thrown every challenge from the day that we brought her back from her loan, and I think she’s just developed into a world-class left-sided player. All credit to her, she personifies exactly what we want from our squad.”

You can read our exclusive interview with Katie from December reflecting on her time at the club here, when she reached 100 Arsenal appearances.

Yes! Player of the season for me!

Between her and Wally for me. Katie just edges it on the number of assists and spectacular free kicks.
Very important for Arsenal to obtain her signature for the next few seasons.

Amazing news, Katie is so good. Pleasure to watch.

It’s rare to have players stick around for longer than 5 years or so in the women’s game, so this is great news. I would imagine clubs challenging for the Champions League would jump at the opportunity to sign her on the back of this season, delighted that she’s staying.

Oh, thank goodness for that! So glad you’re staying with us, Katie!

I’d believe Jill has gone. You don’t say “no” to Wolfsburg especially when they have a coach you get on with and half of your international team mates in the squad.
Similar story to when Dom left following a very successful season at Borehamwood.

I suspect Janssen left because she was offered a significant pay raise. Neither Van de Sanden, Smits or Wilms was at Wolfsburg when she signed. Smits and Wilms are talented but young.

And Wolfsburg were much more successful than Arsenal at the time… Perhaps?
Times are changing though, Lyon are not dominant this season.