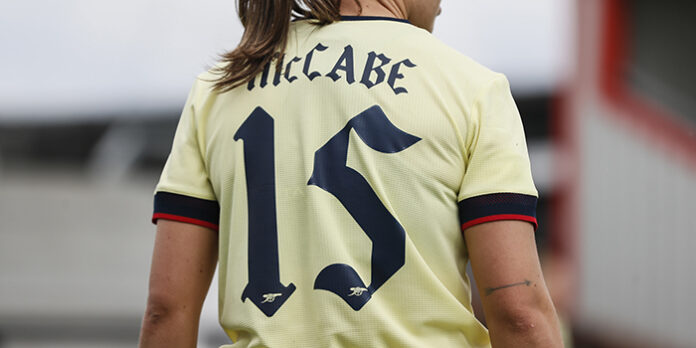 Arsenal left-back Katie McCabe has been voted as the Arsenal Women Supporters’ Club player of the season. The Ireland captain has enjoyed an excellent campaign, in which she has notched 13 assists and five goals from left-back.

The 25-year old signed a new deal with the club recently. The intention was for McCabe to play in a left-wing berth more often this season, however, a series of hamstring injuries to new signing Steph Catley meant that McCabe was required at left-back where she has excelled this season.

McCabe’s long-range strike against Aston Villa in February was also voted as goal of the season by the supporters’ club.

An absolute rocket by Katie McCabe to put Arsenal up 3-0 over Aston Villa! 🚀 pic.twitter.com/tinLxo5sC4

Should be KT’s stand in

She got my vote.
An outstanding season👏👏👏👏

Hmm, scoring against someone who’d struggle to tip the ball over the bar….even presuming the keeper can touch the crossbar…
…s’like kids football….chipping the keeper from distance because the striker knew the Keeper was never tall enough to keep it out…
… Still if the ladies want to play in full sized goals…good luck to ’em.

Yeah, at least it’s not the same at both ends.

Well they always have done but now some bloke off the internet has been dismissive I’m sure they will all rush to reconsider. They really should have sought your approval in advance.

Totally unacceptable comment. Amazed it was allowed through. You want to have a long, hard look at yourself.

Obviously not realised that some of the women keepers are 6 footers which is taller than some of the goalies that the Arsenal men’s first team have had.
I don’t mind ignorance as the women’s game is still growing in terms of audience but there is no need to be derogatory as it just shows YOU up to be a plonker!

Talk is cheap and easy😊 maybe you would want to score against Ellie Roebuck, Sandra Panos, Alyssa Naeher, Christiane Endler to see whether this is kids’ football, or just simply another adult speaking like a kid without thinking?😝