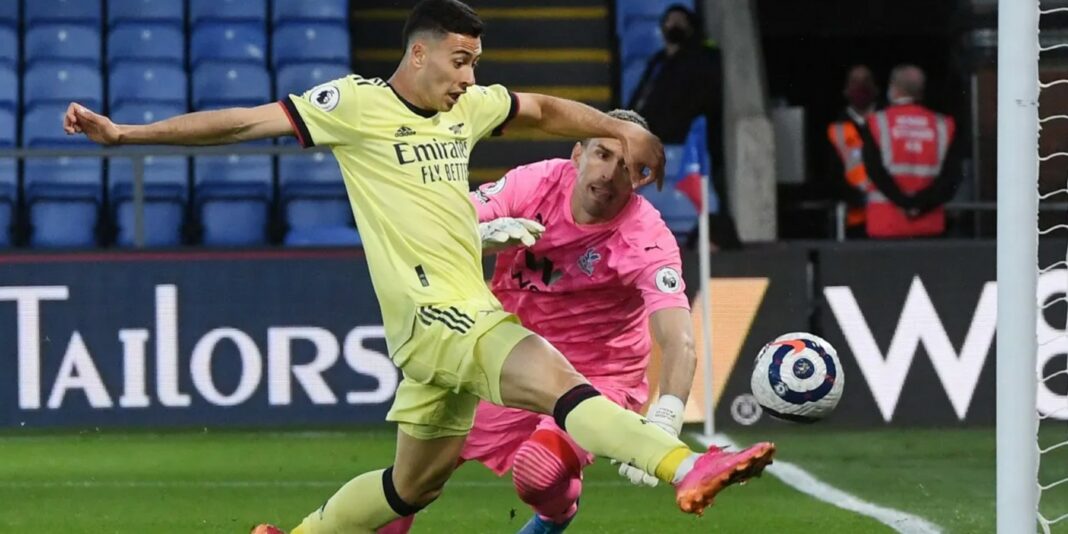 Gabriel Martinelli’s stoppage-time strike proved to be a decisive moment as Arsenal ran out 3-1 winners at Crystal Palace to keep our hopes of qualifying for Europe alive.

Collecting a fine lofted pass by Martin Odegaard, the Brazilian scored from close range to give the Gunners a late lead before Nicolas Pepe added to his first half effort with the final kick of the game.

After the match, Martinelli faced the BT Sport cameras. He’s not done many interviews in English so it was short and sweet. Just like his cameo…

“It’s so important the victory,” he said. “We need this victory to believe [in qualification] for the Europa League for next season.

“I’m always ready, when Mikel needs me, I’ll always be there to come on and score a goal.

“It’s not easy [being on the bench] but as I said, I’m always ready when Mikel needs me.”

He added: “We have brilliant players and we believe in the Europa League so we need to fight. We have one more game so we go there and try to beat them [Brighton].”

At the time of writing Arsenal sit in 9th place but with only one point separating us from Sp*rs and Everton, there’s still a chance we might earn a place in the inaugural Europa Conference League. Depending on what West Ham do this evening, we could even squeeze into the Europa League.

Either way, St Totteringham’s Day is back on the table and that’s reason enough to be hopeful of a win against Brighton on Sunday.

I comment my reserve until i hear other people’s opinion

Really want to finish above Tottenham, but really not sure I want us to play in the Europa Conference League next season. Maybe the best compromise would be victory over Brighton, a Sp*rs defeat to Leicester and an Everton win at Man City, so we finish 8th and Tottenham 9th…?

I think that’s the general consensus.

But it would still be a distraction for the manager and reduce his opportunities to work on the training ground.

we can finish ahead of spuds and then decide if we want to bottle the play-off round of the ECL later. i’d be happy to see us just focus on the league and have the extra time on the training pitch next season.

Putting pressure on Arteta to give him a proper chance

Today is exactly how he should be going about that. Good headache to have.

As much as I want to be in Europe (even europa league) I think I’d rather we sit a season out completely than play the new europa conference league.

What does everyone else think?

Salibaba and the Forty Thieves
Reply to  Russ

I agree. Arsenal in the ECL would feel like that kid who’s a couple years older than the rest of the class but got held back due to bad grades. You know they’re not supposed to be there but that’s the reality of things

It wouldn’t feel great to be facing League One level teams with budgets hundred times smaller than ours.

I’m not even sure what the benefit would be for the U23s & U18s if they played in a group stage match. They’d likely be facing teams only slightly better than their level.

Luckily (?) coming 7th only gets us into a playoff for the Europa conference mcChampions thing. I would not be opposed to delicately throwing that playoff to keep us out of it. Either way, if St Totteringham’s Day happens it will be a good end to a meh season.

Salibaba and the Forty Thieves
Reply to  Russ

Quick question for you Russ.

Knowing that we only have won two European competition in our entire history. Are we actually in too much of a haste to disregard the Conference League.

Just looking at our record. We’re really slacking in terms of our League Cup and European trophy haul for a club our size. Especially when compared to smaller English teams.

Spanish Gooner
Reply to  Salibaba and the Forty Thieves

I agree and I’ve always wanted us to win the Europa for the same reason. I also would hate for us to finally get back into the CL then be in a group with Bayern and PSG because our coefficient is shit from not qualifying for anything

Russ
Reply to  Salibaba and the Forty Thieves

Yep, good question. I just wonder if having a year out of it where we have more time to concentrate on the league and try and compete for a (don’t laugh) top 4 space and the domestic cup competitions may benefit us more than travelling around Europe facing lesser teams. I can see it as an advantage to give time to younger players but if we start progressing in the competition and using our first team players which distracts us from the league and then even if we win the conference thing we don’t even get a trophy (I think… Read more »

Martin Keown and Freddie Ljungberg are gushing over Martinelli. Most of us supporters think he is the real deal.

With reports that Willian is looking for a way out, hope Arteta and Edu realise its the right thing, let him leave and give those minutes to Martinelli for next season.

Absolutely. In my opinion there are two options: buy a genuinely Champions League quality player like Sancho/Grealish (obviously this is unlikely), or give the minutes to Gabi with Nelson as a backup. This kid is the radio edit Suarez and we’re lucky to have him on the team

Why Arteta did not play him in critical match is beyond me. Like ESR, he is a dynamic player willing to gamble into the box. Worth noting ALL our goals from wide strikers running in on the diagonal. Pepe’s second saw him gamble into the box carrying the ball. none of the Palace defenders wanted to touch him for fear of a penalty. Why we aren’t doing these sort of penetrative diagonal runs more is beyond me. On that note, Arteta also guilty of not using Pepe enough second half of season when his form finally picked up as he… Read more »

Gabi sounds like Captain America at the end of Civil War 😂