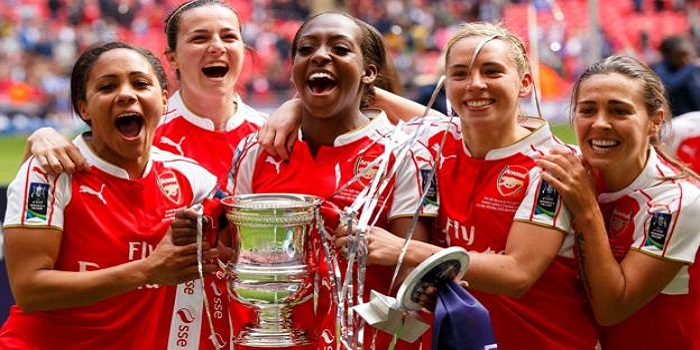 The dates for the final rounds of the 2020-21 Women’s FA Cup have now been confirmed. The tournament was postponed during the winter months due to the government ban on non-elite sport, which meant amateur women’s teams were not allowed to train or play.

That ban was lifted in March and the tournament restarted. Arsenal played their 4th round tie against Gillingham in April, winning 10-0 and will play at home to Crystal Palace on Sunday in the 5th Round.

The dates for the remainder of the 2020-21 #WomensFACup competition have been confirmed. 🏆 pic.twitter.com/iuJt2hOAEe

The competition will finish in the winter, the same as the 2019-20 competition did due to the coronavirus pandemic. The quarter-finals will be played on Wednesday, 29th September, the semi-finals on Sunday, 31st October. The final will take place on Sunday, 5th December at Wembley Stadium- this will be the 100th anniversary of the FA’s ban on women’s football which persisted for 50 years.

Arsenal are comfortably the record holders of the trophy with 14 triumphs, fourth tier Southampton are the second most successful side in the FA Cup’s history with eight. The Gunners are aiming for their first cup win since 2016. Next week, we will be releasing an Arsenal Women Arsecast with broadcaster, commentator and journalist Chris Slegg, who has just co-written the book, 50 years of the Women’s FA Cup with Patricia Gregory.

So potentially a really busy autumn. Hope we get the players we need.