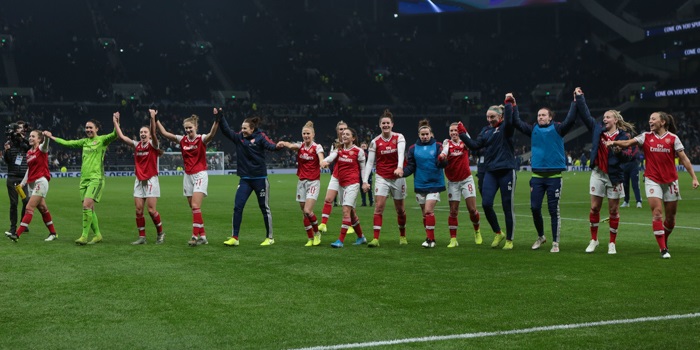 Over the last few years, why Arsenal Women don’t play more fixtures at Emirates Stadium has been a common question. At the outset of the Women’s Super League (WSL) launch in 2011, there were several games at the men’s stadium. In April 2012, the Gunners defeated Chelsea 3-1 in front of just over 4,000 spectators. In May 2013, they somehow contrived to lose 4-0 to Liverpool- who had five shots on goal while Arsenal hit the woodwork four times- in front of around 5,000 people.

Thereafter, Arsenal didn’t play many women’s games at the Emirates. In the summer of 2019, they played a friendly against Bayern Munich as part of a double header with the men, who took on Lyon on the same day. However, the team was understaffed with lots of the main players unavailable having participated in the 2019 World Cup.

The women’s domestic season starts a few weeks later than the men’s which means pre-season calendars don’t always line up well. Double headers are not always ideal occasions either. Firstly, the ticketing for competitive games can be complicated with separate memberships for the men’s and women’s teams, separate media and staffing requirements. The women playing prior to the men creates a sense of dislocation too, with a semi-interested crowd drifting in at sporadic intervals during the women’s match.

Arsenal will repeat the double-header experiment this summer with a friendly against Chelsea as part of a package with the men’s teams and the Mind charity on August 1st. Again, this game is likely to be contested between a pair of depleted sides. The Gunners have nine players competing at the Tokyo Olympics and the women’s tournament in Japan doesn’t finish until August 5th. Chelsea have eight players at the Olympics.

With fans set to return to stadiums in August, it was a can’t miss opportunity for Arsenal Women to play in front of a larger crowd at the men’s stadium. The game also represents a much-needed warm-up for the players who are available, with Champions League qualifying beginning for them in Moscow on August 18th. The truth is, Arsenal v Chelsea on August 1st will not represent the best of either side.

The reasons that Arsenal have played infrequently at the Emirates since 2013 are multi-faceted. The focus has been on getting more punters into their home ground at Boreham Wood. A 4,000 capacity ground operating closer to capacity makes for a better atmosphere than 5,000 sparsely spaced across 60,000 seats. Arsenal signed a ten-year extension to their lease with Boreham Wood in 2017 and have helped fund an upgrade in facilities at the National League ground.

Initially a desso hybrid pitch was laid (though it had to be replaced with real grass again shortly after). Arsenal helped to fund a refurbishment of the dressing rooms, new dugouts and two refurbished stands at Boreham Wood. The newest stand, opened in 2019, has been named ‘The North Bank’ as a nod to Arsenal supporters. The club put a focus on getting their hardcore support, who often sit behind the dugouts in the East Stand at Meadow Park, into the more spacious North Bank end.

Players were directed there to sign autographs and pose for selfies with fans, as they do after every home game. There is also the issue that the Emirates Stadium is not the women’s home ground, Meadow Park is. Boreham Wood is where the players feel comfortable and avail of home advantage- they effectively surrender home advantage by playing at the Emirates where they are less familiar. In the 2016 season, Arsenal went through a period under then coach Pedro Losa where their away results were far superior to the home results.

Arsenal wanted to concentrate on making Meadow Park their fortress and that began with further investment in the playing surface to suit their passing game. In short, Arsenal have had a short-term need to focus on getting a return on their Boreham Wood investment and making it feel more like home for the players. That objective has been firmly achieved now.

At the outset of the 2019-20 season, there was a big push in the WSL to have more games played in men’s stadiums. On the opening weekend of that campaign, Chelsea played Spurs in front of 24,564 at Stamford Bridge. 31,213 watched Manchester City play Manchester United at the Etihad. Momentum grew as the North London Derby in November 2019, played at Tottenham’s new stadium, attracted 38,262 spectators- a WSL record.

Arsenal recognised the momentum shift; but the pandemic intervened in March 2020 and games were forced behind closed doors. Though they clearly missed an opportunity to play their opening game of the 2019-20 season against West Ham at the Emirates. They were defending champions at the time after all and the summer of 2019 saw audiences of millions tuning into the Women’s World Cup.

This season, the horizon looks different with fans set to return to stadiums. The men’s team have not qualified for Europe, meaning the Emirates Stadium will play host to fewer fixtures next season. Supporters are also itching to return to live football and with a money-spinning TV deal with Sky Sports and the WSL kicking in for 2021-22, there will be more eyeballs than ever on elite women’s football.

The WSL have done a very good job of compiling fixture lists that nod to the realities of competing with the crowded men’s calendar. Big-ticket games and derbies are often scheduled for men’s international weekends with a push to hold them in the bigger stadiums. The opening weekend of the WSL always takes place during the September international weekend. Kelly Simmons and co at the FA have done a superb job of scheduling these big games at good times when bigger crowds and bigger TV audiences are more likely.

I am assured that Arsenal recognise that the time is now for the women’s team to play more games at Emirates Stadium. The fixture list has been kind to them in this respect for 2021-22. They open the season at home to defending champions Chelsea on September 4th / 5th- a men’s international weekend. Both North London Derbies (away on November 14th and at home on March 27th) take place during men’s international weekends. My understanding is that the club are targeting four to five women’s fixtures at the Emirates next season.

Arsenal Women play at home to Spurs Women in the quarter-finals of the FA Cup (the scheduling for last season’s FA Cup was disrupted due to covid, so the final rounds will be played during the first half of 2021-22) on Wednesday, 29th September. This represents a free midweek for the men. Everton at home in the WSL on October 10th also takes place during a men’s international break. If Arsenal qualify for the Champions League group stages, they will be unseeded, guaranteeing them at least one group game against a European heavyweight.

There is ample opportunity to play games on a bigger stage and get more eyeballs on the women’s team and, I am told, it is an opportunity the club recognise. The logistics of moving games are not always straightforward but they are very much within the gift of a club the size of Arsenal. After 18 months without crowds, fans are itching to get back into stadiums to watch live football and the men’s team will be playing fewer matches at this critical juncture. There is no better time for the club to seize this opportunity and give the women’s team a greater platform.

If Arsenal could get 20,000+ in for home games at the Emirates (something which I don’t think is unrealistic, considering the interest in the women’s game is only rising) then they would be mad not to push on with it. I guess they need to ensure that ticket pricing is right to at least ensure that they break even in the first few seasons (opening the ground for games is hardly ‘free’). But this is such an obvious growth market and Arsenal are gifted by having a women’s team already functioning at the top level, there’s so much potential. And,… Read more »

This is something I’d really like to see go through. It just feels like there wouldn’t be a better time to do it. Obviously the club’s obligations to Borehamwood still have to be considered but that’s a no-brainer.

Is installing drainage and heating systems for the pitch at Meadow Park a possibility? Flooding has become more of an issue in the U.K. in the last decade.

could be, would require ripping up the pitch and taking the stadium out of use for a short period but not impossible.

Thanks to Tim Stillman for articles like this, that help many of us understand the issues and decisions being made in women’s football. I think covid with its restrictions has really highlighted how different football is when a big stadium has only a handful of fans (much better than empty–but not very good). Many years ago, I worked for a (men’s) team in the United States that regularly got 8,000-10,000 or so supporters–but in an NFL stadium that could seat 80,000. Closing the upper tier, seating everyone in one or two central sections, and every other trick imaginable were rarely… Read more »

I read this just after I watched Lia Walti and Katie McCabe ask each other questions. Lia: “Katie, what is your favourite game playing for the Club?” Katie: ” The NLD at Tottenham Stadium in front of 38k fans. Fantastic atmosphere.” I recall Viv making a similar observation. Whilst I have some sympathy with the view “Fortress Meadow Park” and ceding home advantage, when it comes to Chelski this doesn’t really apply. Sure, we were a tad unfortunate not to beat them last season but prior to that it’s been three home defeats in a row including the 1-4 tonking… Read more »