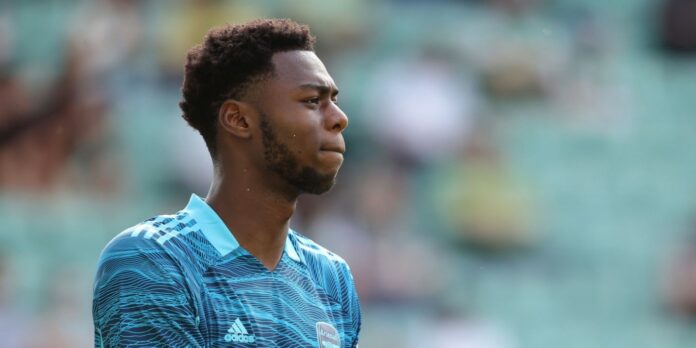 Mikel Arteta has confirmed that Arthur Okonkwo will feature against Rangers on Saturday as the boss looks to build the young goalkeeper’s confidence following a nervous debut against Hibernian on Tuesday.

Having been promoted to the first team squad last week, the 19-year-old was handed his first start at Easter Road but struggled to get to grips with the occasion.

Not only was his handling and distribution a little ropey, but he also made a mess trying to clear a bouncing back pass from Cedric allowing Hibs striker Martin Boyle to tap into an empty net.

While it was probably pre-planned, he was subbed at the break to be replaced by fellow debutant Karl Hein.

Ahead of the Gunners’ second match of pre-season, Arteta backed Okonkwo to improve.

“It was his debut, he was so excited,” he said. “He has earned his place in the first team with everything he has done at academy level. And unfortunately, that happened. But things will get better, he will have another chance on Saturday.

“So hopefully he can be better. He’s confident in his relationship with his teammates and everything. It’s time to support him, he’s our goalkeeper and we need to give him confidence.”

We’ve no doubt Arthur will improve. Rarely is a goalkeeper’s ascent to the top of the game plain-sailing. Lukasz Fabianski, Wojciech Szczesny and Emi Martinez all made early bloopers in Arsenal colours and they’ve done alright since…albeit elsewhere.

Good to hear he’ll get the chance again – we don’t want to fuck his confidence even if that first half is one to forget.

Willian, on the other hand… Why is tubs starting again? Let him rot in the reserves or find another club.

He really doesn’t give a fuck, does he? It’s as if he decided to eat himself fat over his holiday to mock us for not accepting that he’s been shit all of last season. I’m beginning to hate this guy.

The Beast
Reply to  Twatsloch

I get it, he was a massive disappointment last season. But it’s a bit of a stretch to think he would knowingly sabotage what’s left of his career just to spite us.

I wouldn’t waste my time hating someone I don’t know & who’ll probably play a limited role in the side. Mild indifference maybe? That’s definitely one of my fav emotions

The Beast
Reply to  The Beast

As for Okonkwo, I’m pretty excited (as I would be for any academy player that breaks into the 1st team). Hope we can give him the confidence to one day be our number 1.

AusGunner
Reply to  The Beast

agreed. I also just don’t see it as that big a deal. Like, it’s not ideal, but that weight will disappear in no time.

I have to say, I do wonder what the attitude would be to a player in the women’s team coming back from holidays with a few extra kilos. Less vituperative, I suspect.

It’s a 250k a week for the next two years no big deal with a fat gut on top which doesn’t give a fuck how far our club falls from the number one, four and sixth place.

Hate is too strong a word, Bro. Take it easy– it’s just a game.

He was wearing a weight belt. It’s a shame that was not widely known before so many people jumped to the conclusion that he’d been at the pies.

Just want to say this. Liverpool and City will be top four. Chelsea is after Haaland. Man U is getting Sancho plus Varane. Where is our path to top four? Other loans from Spain will not achieve anything as proven before.

For me this is everything. Will we attract enough to be a bit better? Is our true goal top 6? Top 4 is a pipe dream right now and we still have several teams to battle for places 5 and 6. I hope there is some magic in this window so we can be proud once again.

At this stage top 6 and better s***s would be pleasant. We’ve got a long way to go and simply moving up the table instead of down would be a nice start. Oh, how far we’ve fallen…

1st time in 10 years of me being an arsenal fan, i am not excited for the start of new season. It’s like I know what i am going to get with this arteta team. Slow build up with same players. The names which are linked to us are underwhelming( nt maddison) and i dont think signings are going to change the way we play.

Runnarsson notably absent from the final paragraph. He was very summarily chucked under the bus of irremediable shitness.

Just nerves methinks ? The youngster looks the part and I’m sure he’ll go on to bigger better things 👍

Best to give him game time while it doesn’t count. Hopefully it’ll bed it into his head that he’s deserving of his position and clear the nerves.

The Euros showed that top keepers also make ricketts, notably Simon for Spain – he didn’t even bother to miskick!

I hope Okonkwo will come good as we are short in the GK department. Obviously letting Martinez leave instead of Leno was a big blunder on Arteta’s part. We will probably never have a GK as good as him for the next 5-10 years. The whole defense played better with Martinez commanding in goal. Aston Villa became a decent defensive unit last year, now Argentina… heck we even managed to win the FA Cup with wins against City & Chelsea. Leno is a great shot-stopper, but has less all-round influence compared to Emi.

A Different George
Reply to  Der32

I like Emi a lot. But, if he is better than Leno, it is not by much. If you have two roughly equal keepers (something that was, of course, not really certain when Martinez left; he had looked very good for half a season, less good for a decade including loans) and one wants to go and the other doesn’t, and you can get a really good price for the one who wants to leave–well, I don’t see a blunder.

Reminds me of Martinez against Reading in the League Cup and now look at him flourish!

Looks like Odegarrd is back on……? He was good and has a great attitude, but I’d rather have Aouar who would probably be half the price, so why is this even a thing?

The Beast
Reply to  UzesGooner

Haven’t seen much of Aouar but I know that Ligue 1 is going through a bit of a financial crisis atm, so there may be some bargains to be had.

Anyone aware of what his form was like last season?

I reckon Cedric was charged with testing the young lad out by hoofing him crap back passes in a match of no consequence!
Glad Arthur is being given a chance to show what he is capable of.
All goalkeepers are a bit suspect at times, it comes with the territory of wanting to play in goal it is just unfortunate for them that their mistakes often end up as a goal against.

Hope is alive then that “a little excited on his debut” Runarsson may yet go on to become world class.