Arsenal announced their third signing of the window, with the signing of Ben White from Brighton.

Unlike the signings of Nuno Tavares and Sambi Lokonga, White is a signing that I expect will step right into the Arsenal first team. So let’s take a look at what Arsenal is getting. 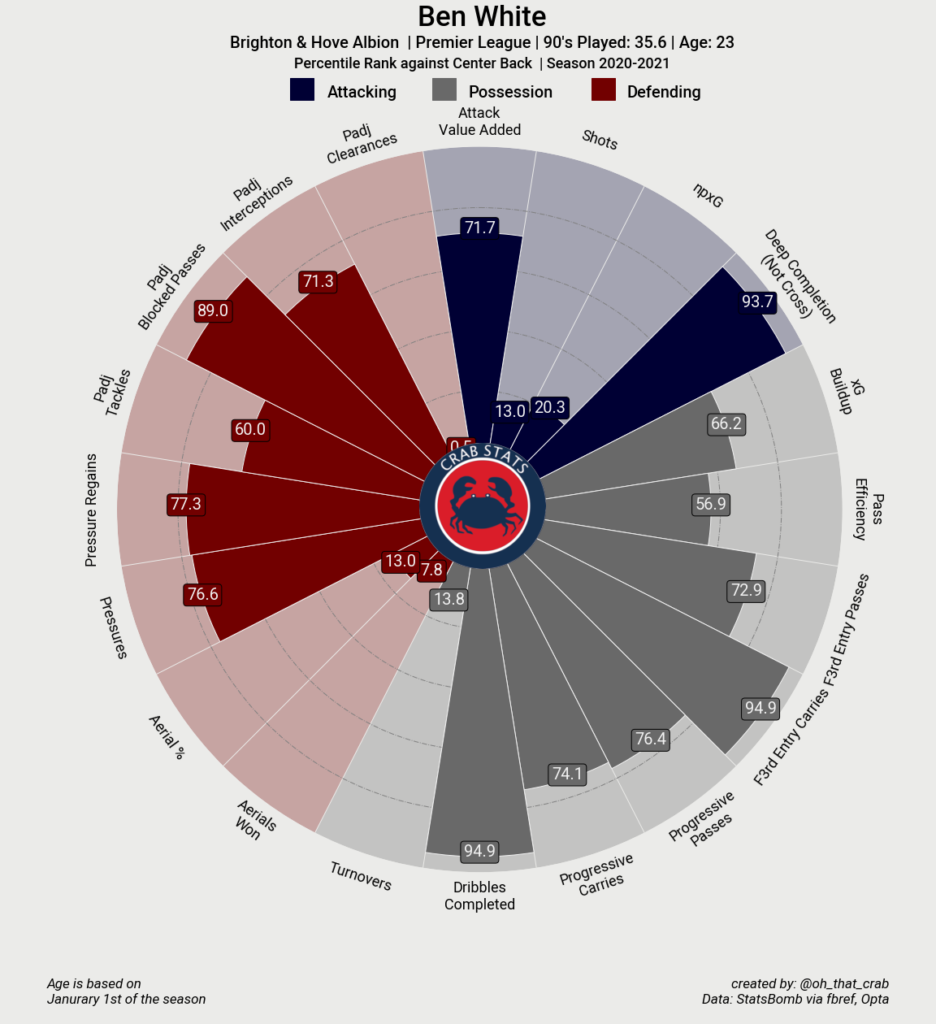 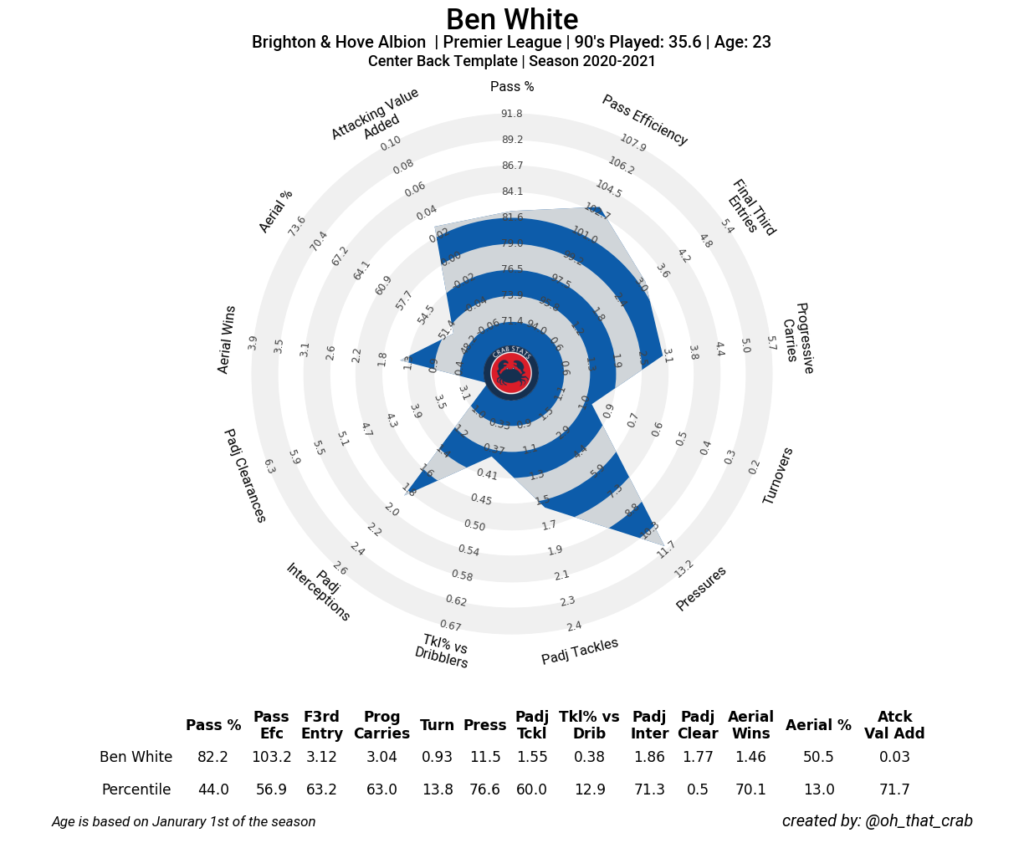 Before we go any further there are some important things to point out. First is Ben White played several positions for Brighton and that will have an effect on his statistics. Second, the stats for center backs are less than perfect.

The job of a center-back is to stop something from happening and that doesn’t always match with event data which only looks at what did happen on the ball. A player who is in the perfect position and stops an opposing player from trying a pass into the box does exactly what they are supposed to but gets no statistical credit for that, a player who makes a mistake in positioning and makes a great late tackle gets the credit but also was the reason that happened. Having detailed event data is awesome, but it is like watching the game in pitch black with only a spotlight on the ball and that leaves important information out or only something that we can try and infer from other signals.

Stats for defenders are also more heavily dependent on the style of play and tactics for the team that they are in. With this understanding, let’s dig into how Ben White looks.

These numbers will be possession adjusted based on the number of possessions that Ben White was on the field for unless otherwise noted as per 90 minutes. The percentiles will be compared to center backs from Big 5 Leagues.

I will leave it to others to give more of a scouting report on how well White defends. From here I can see that he is a busy defender but maybe needs to get a bit better at picking his spots. His job on Brighton didn’t seem to be clearing the ball, nor was he the main person to win Aerial duels in their backline. 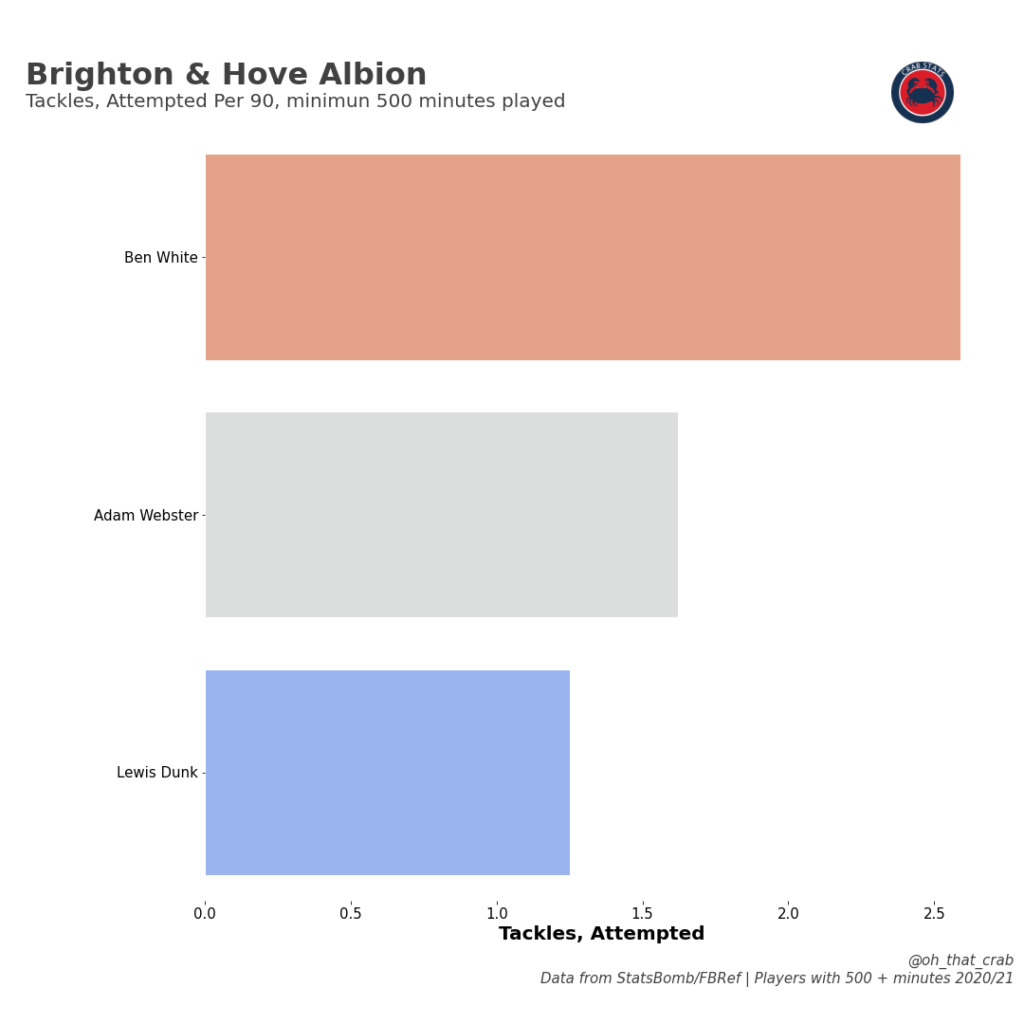 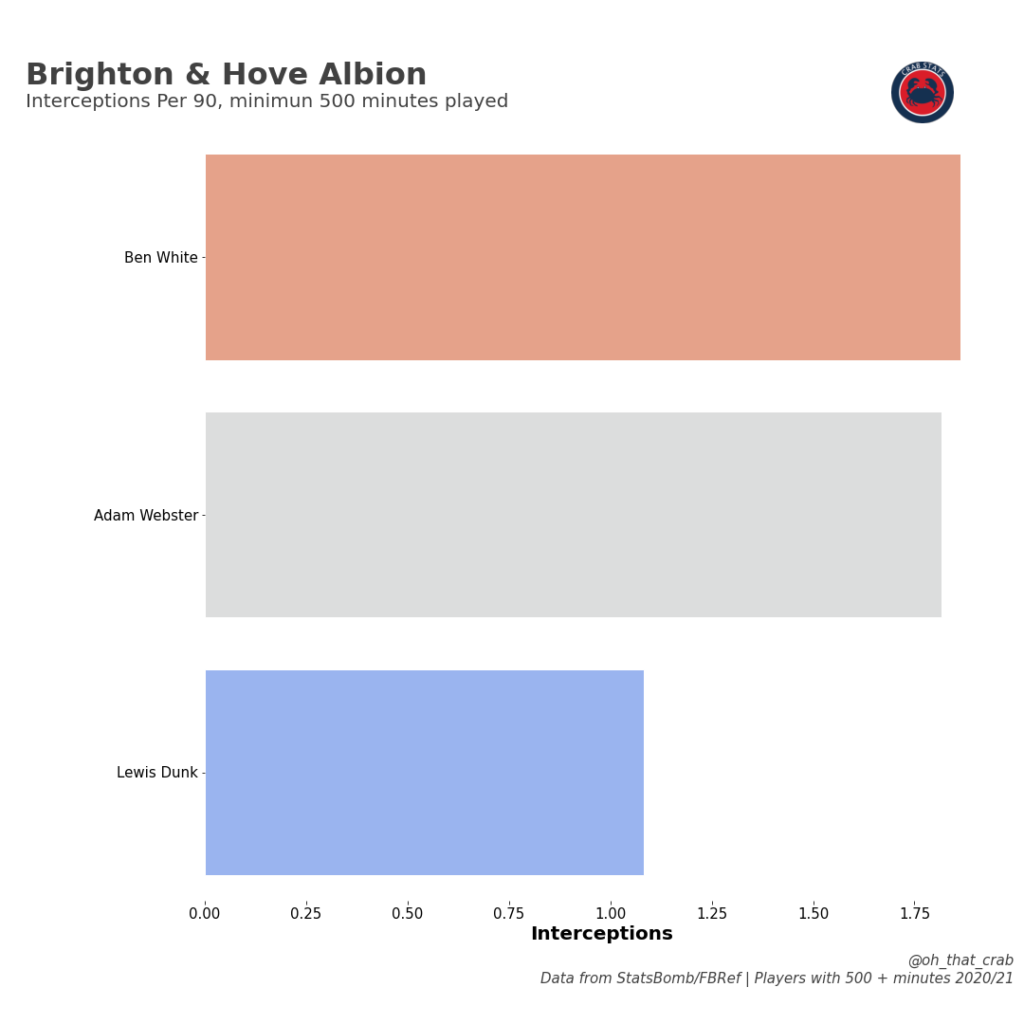 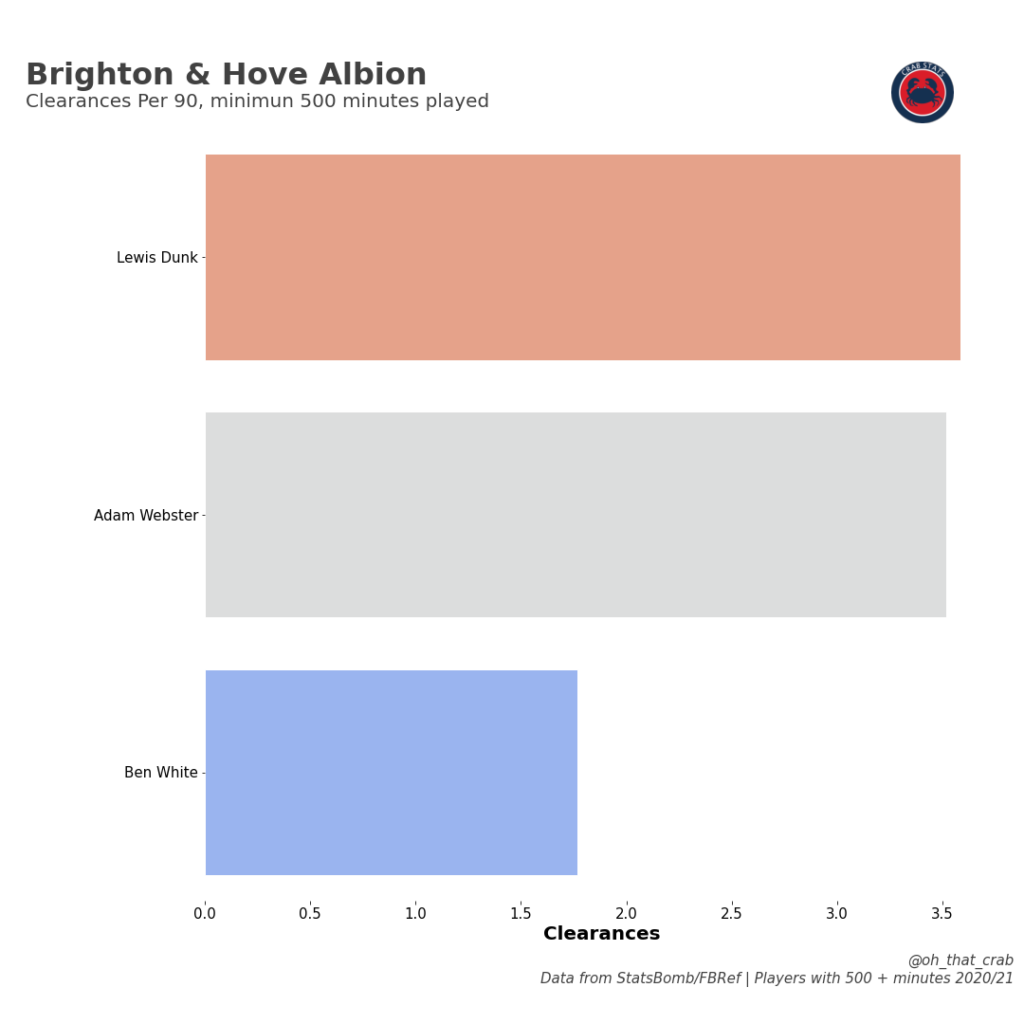 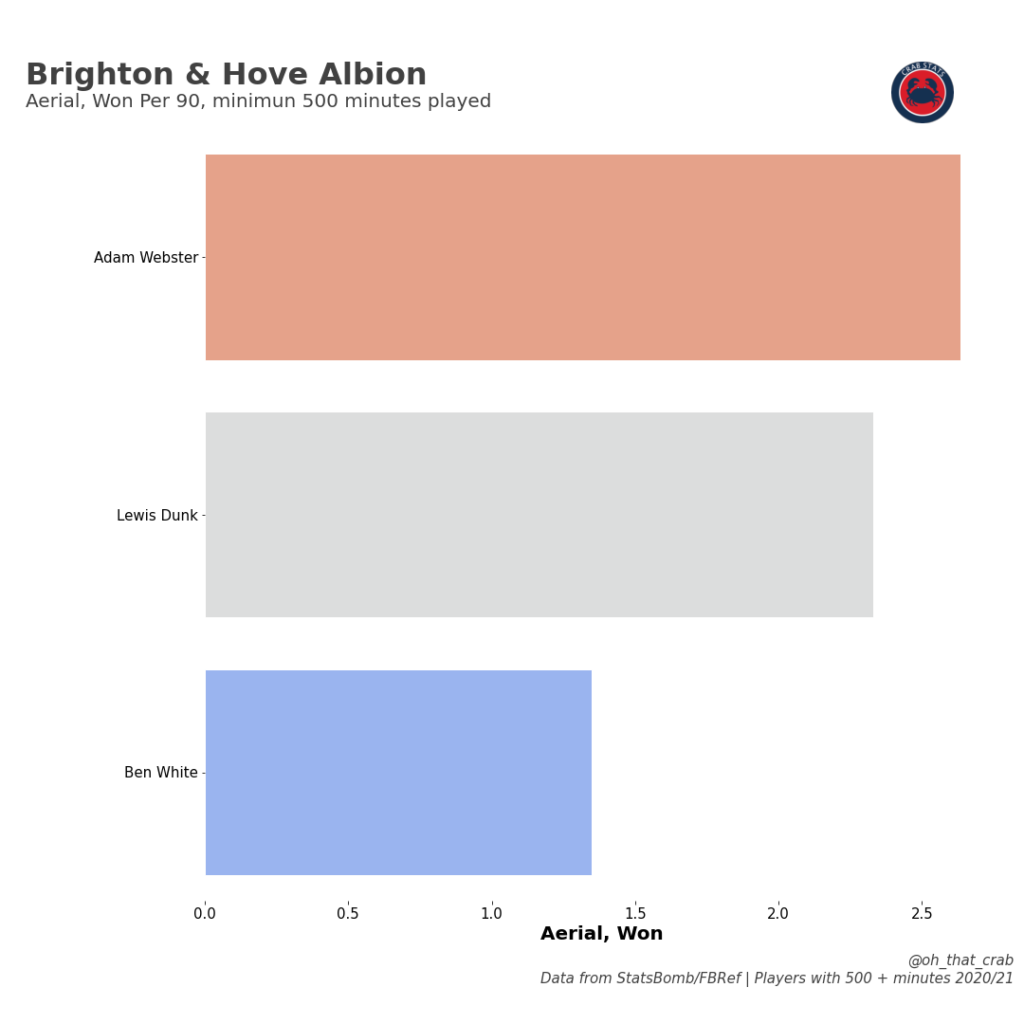 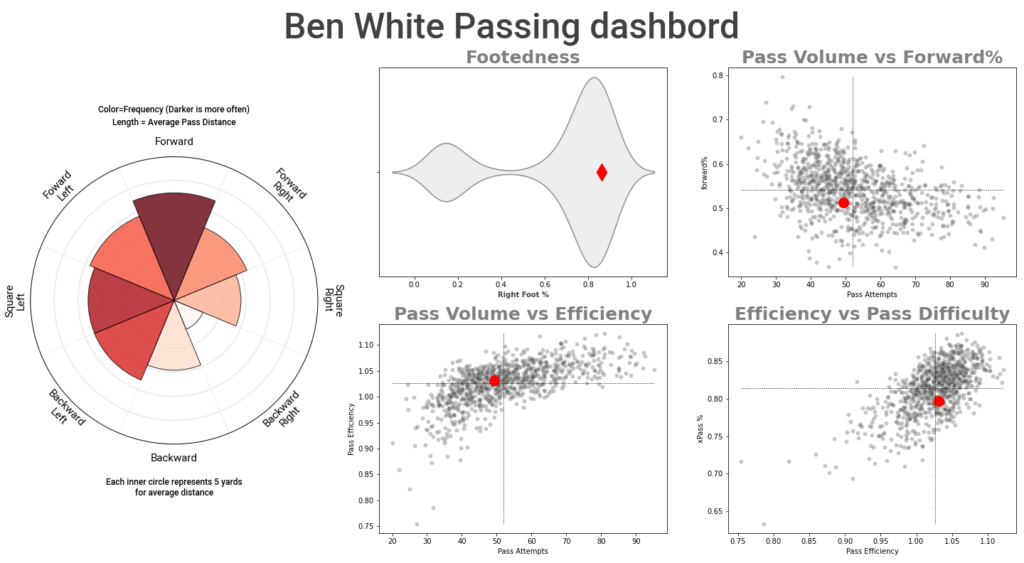 103.2 – Pass efficiency (how much more or less a player completed passes than expected), 57th percentile.

Looking at White’s passing you can see the potential and why Arsenal are interested. His volume is about average compared to other center backs (it will be interesting if he is given a bigger role at Arsenal) but he generally has tried harder passes than the average center back with a good success rate. 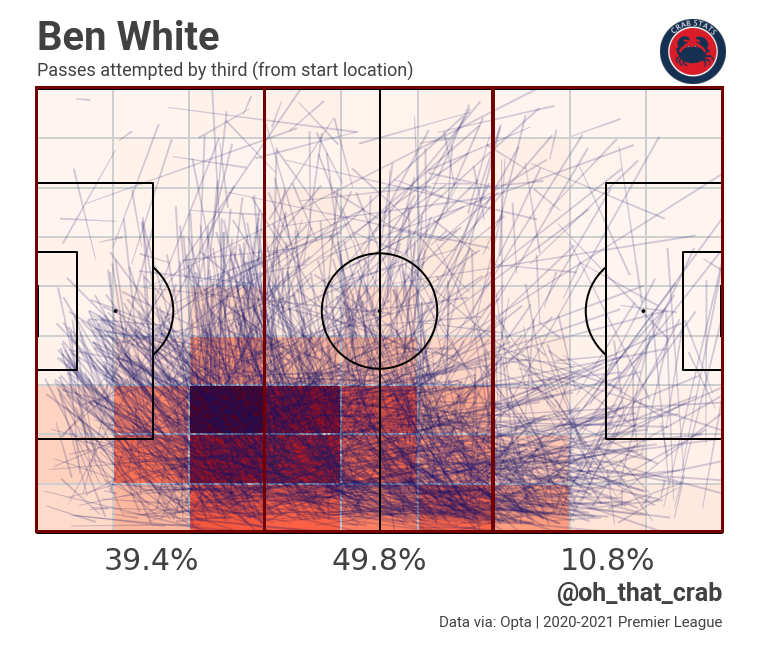 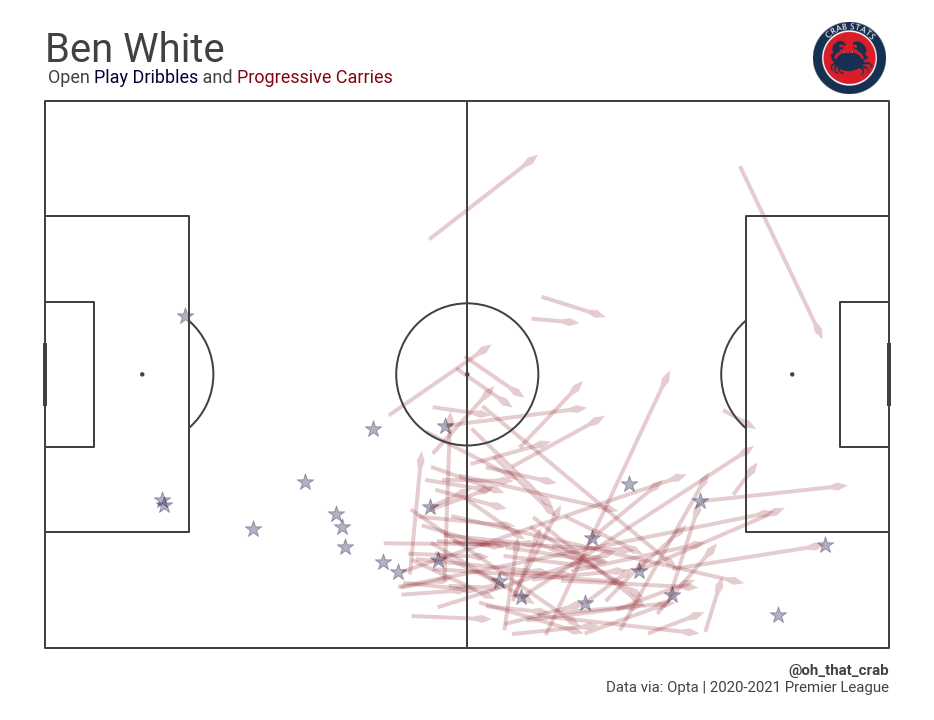 His ball carrying looks good, but he also was able to do a bunch of this as a right-back as well, which might skew things a bit. I think that this will be interesting to see how he can use this skill at Arsenal.

Ben White is highly rated but I think still a bit of a rough-cut stone where he has areas where he can polish things up a bit more.

His age and contract (5 years plus an option, reportedly) should make this something where he could grow into a mainstay for Arsenal and make the big transfer fee less important as it is amortized over a pretty long time frame.

One of the things that I do like is that he has played a lot and that while he has room for improvement he doesn’t seem to have huge errors in him like you would expect from a young player.

I think that he also has the potential to help Arsenal’s ball progression with his passing and ball carrying. I think that with his athleticism he will also give more freedom to either the right-sided midfielder or right back to go forward and give more support for the attack. So he may not directly contribute to attack, but he may give freedom for others to help improve what I believe is the area Arsenal needs the most growth this season.

Sources: Opta and StatsBomb via FBref

If he was a german from Bundesliga he would be a 30m defender. Not saying this to be negative about it, but the premium price tag for English Premier players is really heavy.
Hope he does well, seems to have something special in him, his composure really makes me feel he’s going to do something great everytime he is on the ball.
Good luck Ben!

I will be honest, if you told me after the season ended we would sign Ben white for 50m my first thought wouldn’t have been “get in!” Not trying to be negative, I see why we signed him, he is class, young and will help us creatively from the back (much needed) and help us play out from the back more confidently (extremely needed). The price tag is steep, but I have confidence he will justify it. good luck Ben, and “get in!” (I mean it!)

I think that’s the thought for most fans, a good feeling held back by the price tag and the more urgent need in some other areas

For me it’s the fact Brighton put a 35m tag but added a extra 15m just because he joined the euro squad via trent injuries.

Probably the fact that we are 8th 2 seasons in a row, made it harder to drive the price down. With no UCL football, we probably have to pay extra to get good players off other teams.

I’ll accept the English tax argument when we sell Holding or Chambers and see how much they fetch. Holding has played more games at a higher level, is a big game player and a very good defender, much less error prone than Luiz.

He wasn’t good with the ball at his feet, he wasn’t bad but didn’t have the range. Unfortunately, since he wasn’t a big money signing, he’ll never be rated by our fans. It’ll be better to sell him with an English tax as you say.

I feel rather underwhelmed after looking at these stats. It seems we’ve signed a (not so big) midfielder to play defense. There is room for concern on those defensive numbers that there are going to be a some errors and blow bys. Stats aren’t everything and he’s well praised, but at this price he has to be not just good, but top class. I hope white can do it because we can’t afford another bad boy money signing not just financially, but also to our image and status. We need to get respect back in the clubs name I hope… Read more »

Will be exciting to see him play and help the team with thise Stats.

Why not give Saliba a chance and invest the 50m in a creative midfielder ? I am seriously worried about the way we spend money we seemingly don’t have.

Agreed. But I seriously hope Arteta will prove us both wrong.

Clearly he’s not rated to be a starter by the guys who know a lot more about football than we do.

He was also bought for £30m by people who know more about football than we do. They can’t both be right…

The guys who know a lot more about football are driving our club down the table, not up. So concerns are founded. I hope we’re proven wrong with those concerns, but the body of evidence is not good.

Crab, I’m not sure the passes by 3rd graphic works well enough.

the passes come off like childish scribbles and over bear the data grids.

perhaps overlay the grid on top in future?

I am afraid his size will be an issue on the EPL.
I would love him to be a success but I can’t see it happening

I feel like he’s a midfielder playing centre back, he looks great in possession, he’s not bad defending 1v1 but defending crosses and set pieces worries me. He’ll get my support either way but I can’t help feel we’ve over paid for a player we don’t really need.

Here’s a comparison with our other central defenders.
https://www.planetfootball.com/quick-reads/comparing-ben-whites-2020-21-stats-to-arsenals-current-centre-backs/

Yikes… I’ve lado been trying to tell people how impressive Dinos was in Germany last season. I get the feeling we’re just not doing our homework on our loanee (i.e. Dinos and Saliba impressing on loan). The concern is at 50M White is not even a guarantee to be good as evidenced by his statistical analysis. There is risk. That is why the saliba doubters keep on stating him as not ready because he’s not proven. I only see a little more risk with saliba (who’s Also huge and a beast in the air) and that isn’t even considering the… Read more »

Said the same thing then scrolled down to find this. #mindmeld

From his abilities he looks more like a DM than CB.

That’s not the worst idea.