Despite already having five central defenders in the squad, and boasting one of the best defensive records (3rd) last season, Arsenal have sought to retool their defence with a profile better suited to Mikel Arteta’s preferred style of play.

Shopping for homemade talent in the Premier League comes at a premium, but Ben White’s skill-set makes him a fascinating acquisition regardless of the fee. So, what are the qualities he’ll bring to North London, and why have The Gunners dropped £50m to secure his services?

Released aged 16 by Southampton, White signed for Brighton & Hove Albion, initially joining their youth academy. The youngster spent time away on consecutive loan spells between 2017–20 at Newport County of League Two, Peterborough United of League One and Leeds United in the Championship.

At Leeds, under the guidance of Marcelo Bielsa, he played every minute of their 2019-20 promotion-winning campaign. 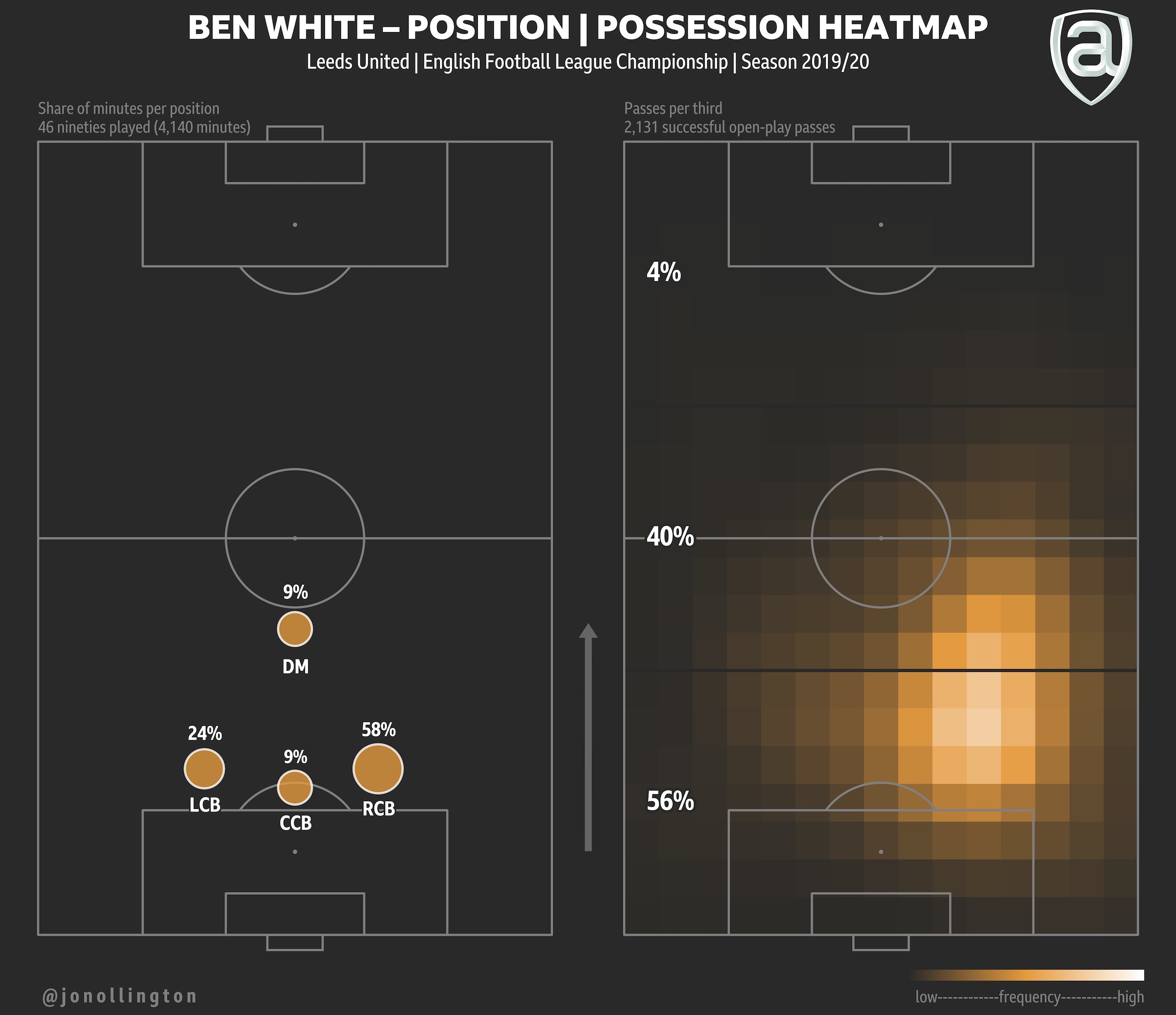 Bielsa generally deployed a 4-3-3 formation that saw White thrive as a central defender on the right side of a back-four. The versatile youngster also spent time in a back-three and holding midfield.

Primarily responsible for ball progression from deep, in possession, the loanee played 76% of all successful passes in his own half. He ranked 9th of all players in the Championship. 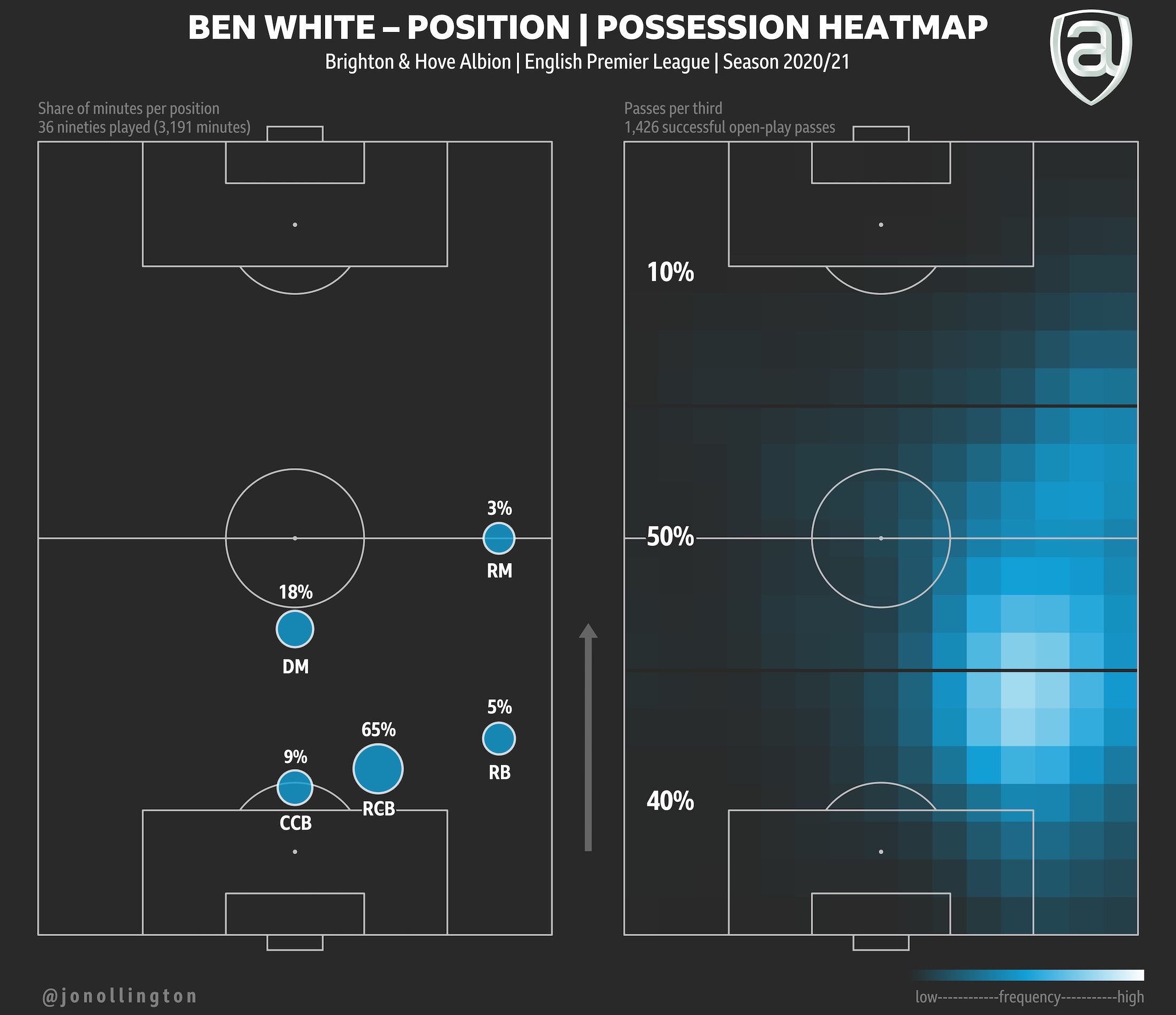 Last season returning to Brighton in the Premier League, White played mainly as the right-sided defender in a back-three. Due to Graham Potter’s ever-changing system and his versatility, he also accrued minutes at right-back and in midfield — applying many of the principles learnt under Bielsa. 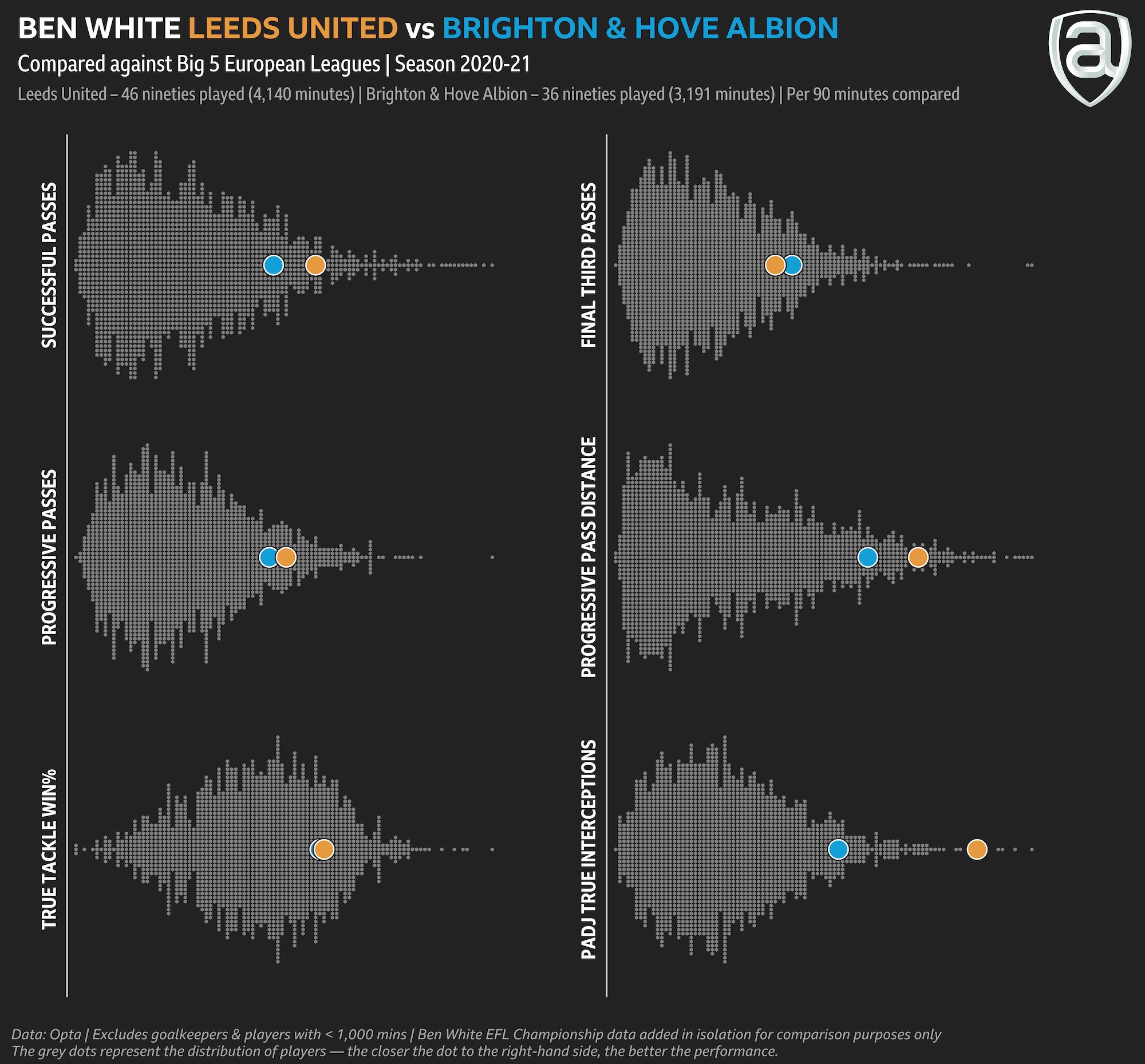 83% of his 1,716 passes played last term successfully found a teammate. At the same time, 8.4% of those passes were progressive and, on average, covered a total distance of 387 meters towards the opponent’s goal per game.

This output was only bettered in Arsenal colours by Granit Xhaka. White also averaged 3.3 per 90 passes into the final third (top 20% for central defenders in the Premier League).

Although it’s worth noting that a lot of what makes a defender good isn’t measured statistically. For example, if a centre-back is out of position, they’re not present for an event to happen. If they’re well-positioned, no event transpired because there is no space for the opponent to exploit.

Many of White’s best qualities defensively aren’t quantifiable – for instance, his understanding of when and when not to engage or his positional awareness. 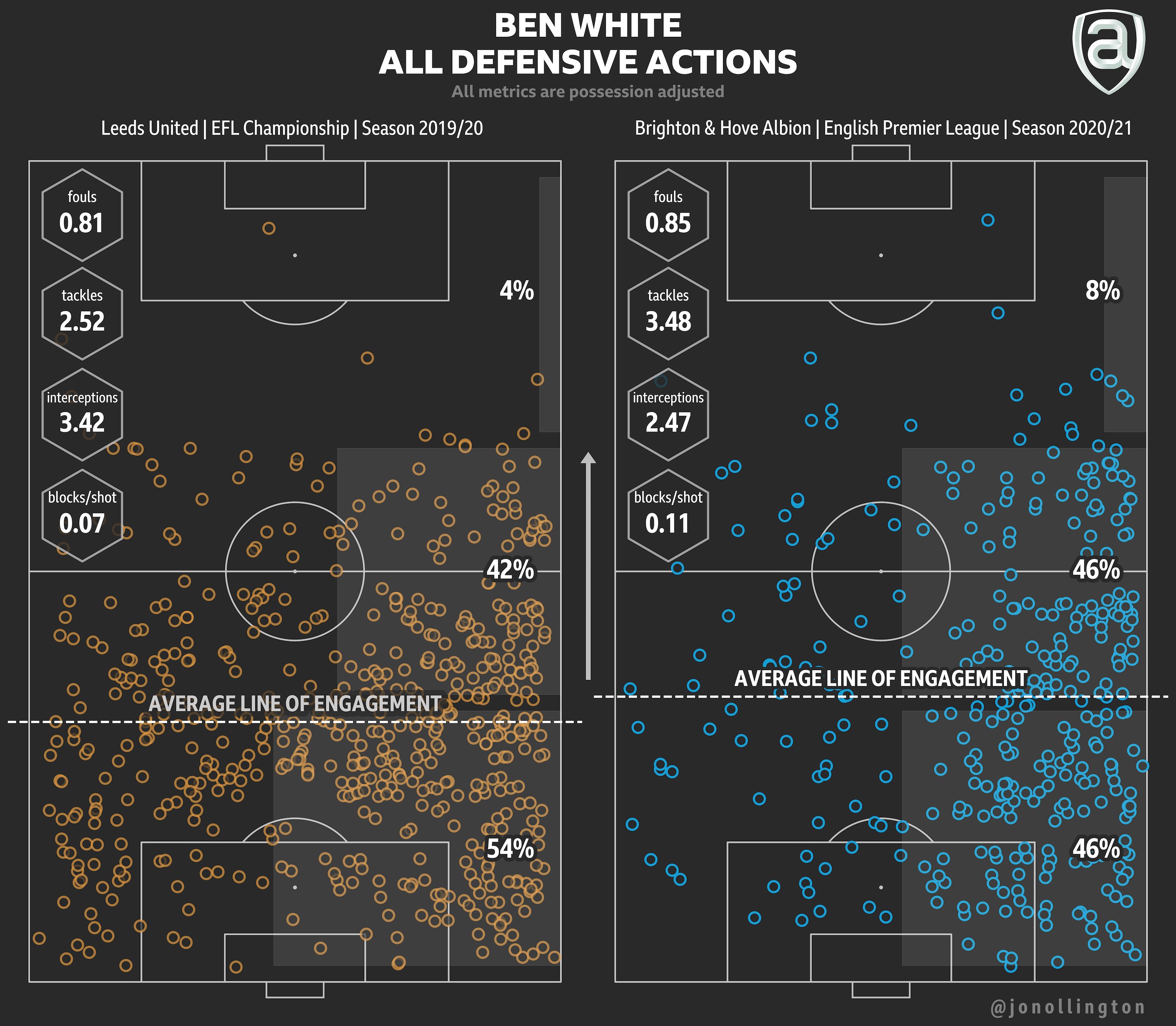 That said, his reading of the game and anticipation enabled him to make 2.2 true interceptions (interceptions + blocked passes) per 90 – a metric he led the Championship and continues to excel in. Only six players managed more across the Premier League last season.

While his defensive ability is a plus and probably an improvement on Arsenal’s current options, it’s his effectiveness in navigating tight spaces and breaking the lines – either by passing or carrying – that will have piqued Arteta’s interest.

And that’s a case in point. Ben White’s ability in possession will be crucial next season. Having already lost David Luiz and with Xhaka’s exit pending, the manager will feel justified pushing the boat out on a young English talent who offers similar qualities with room to improve. 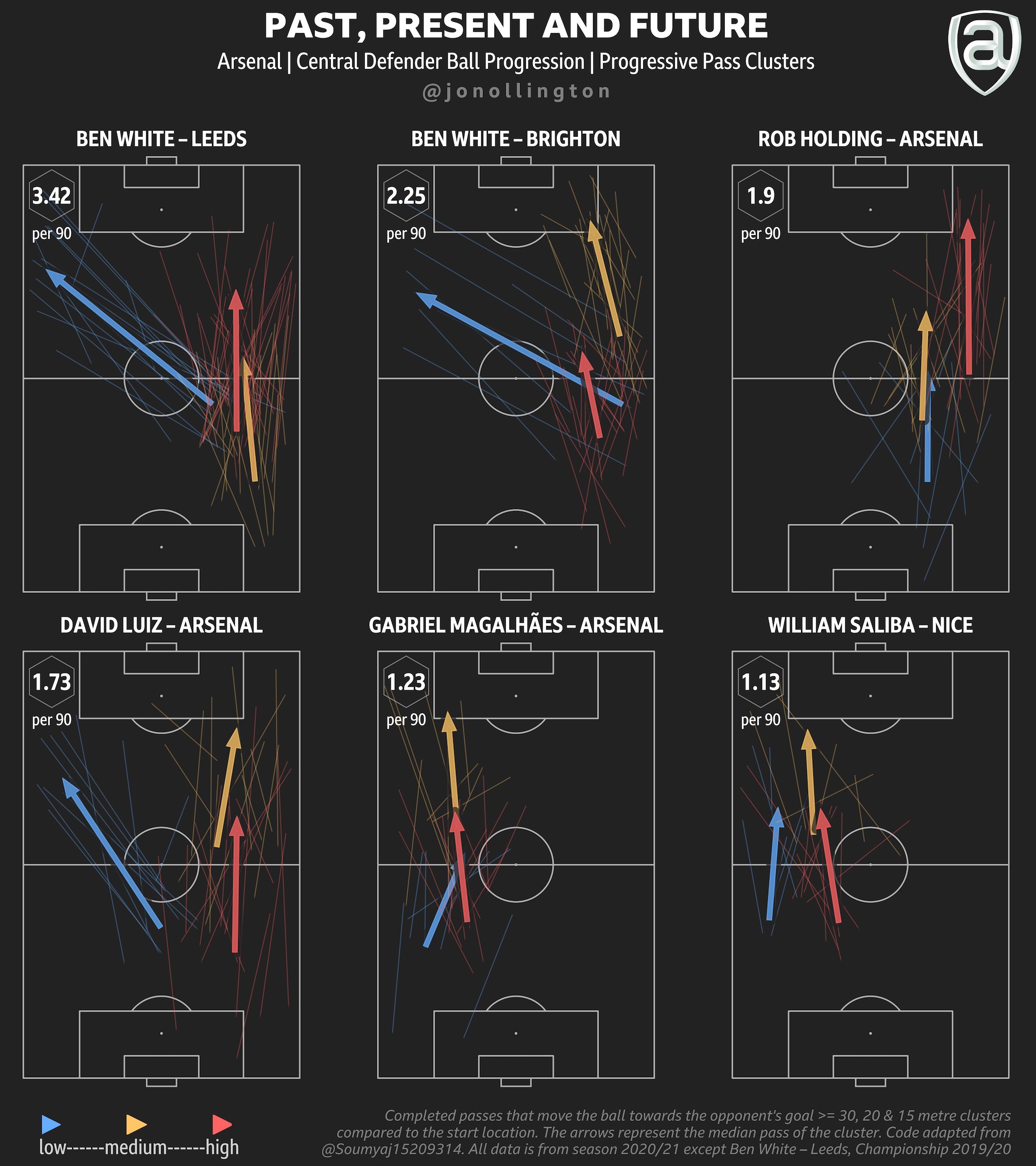 The above depicts progressive passing ranges – those which move the ball upfield towards the opponents’ goal >= 30 / 20 / 15 metres from the start location and show the top 3 clusters.

What immediately stands out from the above are White’s long diagonal switches of play for wide players to exploit. This particular progression is not only fundamental in opening up attacking lanes – it’s missing from the repertoire of the other Arsenal defenders bar Luiz.

Being bold with his passing choices and not being afraid to go long, White’s range and enthusiasm to pull the trigger will not only add another dimension to Arteta’s backline but establish him as one of Arsenal’s primary playmakers from deep. 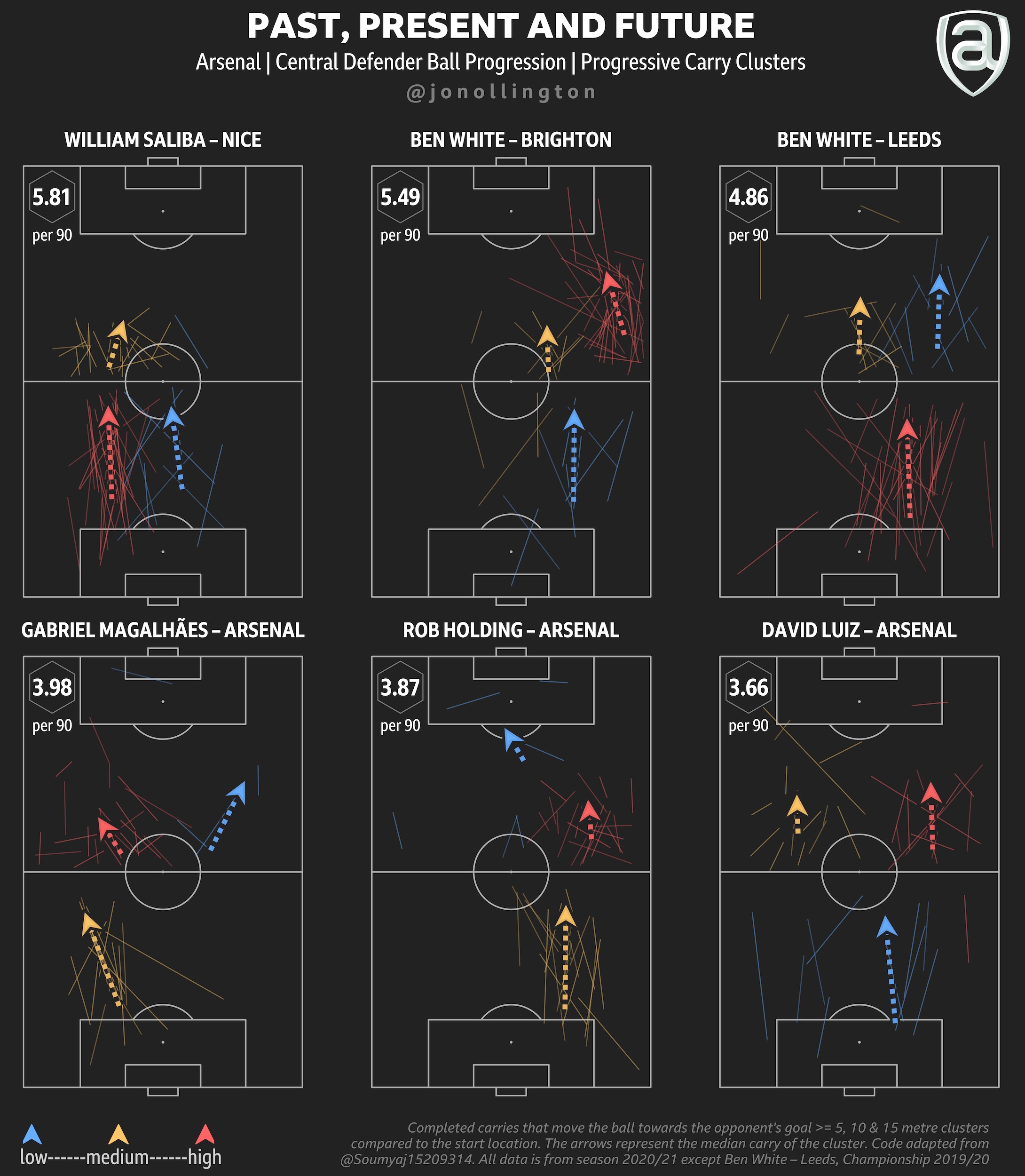 The above depicts progressive carry ranges – those which move the ball upfield towards the opponents’ goals >= 15 / 10 / 5 metres from the start location and show the top 3 clusters.

Representing Bielsa as a centre-back isn’t just about defending – players are constantly tasked with attracting and outplaying pressure when building from the back (as depicted by the red arrow). White was also responsible for pushing his side further up the pitch via carrying.

At Brighton, he’s added more carrying and further up the pitch. It’s an element of his game that is so unique that should Arsenal continue to form a back three during build-up, he’ll undoubtedly be given the same licence to make such runs on the dribble.

It’s these traits and the flexibility shown by Ben White that is currently absent from Arsenal’s defence and essential if building up play in a 3-2-5 or 2-3-5. Both shapes place significant requirements on the centre-backs, and White has been identified to bear the responsibility.

His game still has weaknesses – White was ranked 11th percentile in all aerials won. But, having been educated throughout the top 4 tiers of English football and mentored by the likes of Bielsa and Potter, he has every chance of hitting the ground running under Mikel Arteta.

Arsenal are signing an England international who, aged just 23, will only improve going forward and whose profile should dovetail nicely with Gabriel (think Per Mertesacker and Laurent Koscielny of old).

It’s unlikely he’ll turn The Gunners into title contenders overnight a la Virgil van Djik, not least because Arsenal require more than the final piece of the puzzle, but what he’ll add to build-up shouldn’t be undervalued. Ben White is another piece of the Arteta rebuild in place, and the second significant addition to the team’s spine in two years.

His signing will test the process one way or another.

Previous articleBen White: By the numbers
Next articleXhaka back in training as Roma move falls through

Arteta on transfers: We are trying, but...

“His signing will test the process one way or another.” Yup, exactly. I know there are many, many Arteta detractors out there, but this season truly is the last and final test of Arteta’s project. There’s literally 0 excuses this time, a huge budget, a full pre season, only PL to focus on. I don’t care if I’m being realistic or not, in my opinion, it’s top 4 or nothing. A gradual entry back into the top competing spots is not what should be expected, i think we are all well within our rights to expect and demand a swift… Read more »

Yup. Especially since we could hsve bought odegaard with the 50 mil

We’ll be cursing him like we curse Partey by mid season. Watch this space.

I really like the look of him. I think he adds a lot to what we can do this season.
While we all like to kick the Arsenal brass when talent slips through our fingers, what are S’hampton feeling right now. Released on a free!

Just wanted to say thanks for the visualizations. They help make otherwise bewildering stats *much* more easily digestible. At least for this non-stats-oriented Gooner. 🙂

Different definitions — FBRef exclude passes from the defending 40% of the pitch (as well as a few other noticeable differences). I wanted to look at range — short and long.

What if Ben White was signed as a replacement for Xhaka and not for Holding? He seems to have the same passing range, but much better defensive capabilities and speed.

Do you spend £50m for a player you’re going to convert to a relatively new position?

If we’re putting so much emphasis on what he learnt under Bielsa, why don’t we just start looking to hire Bielsa for next season?