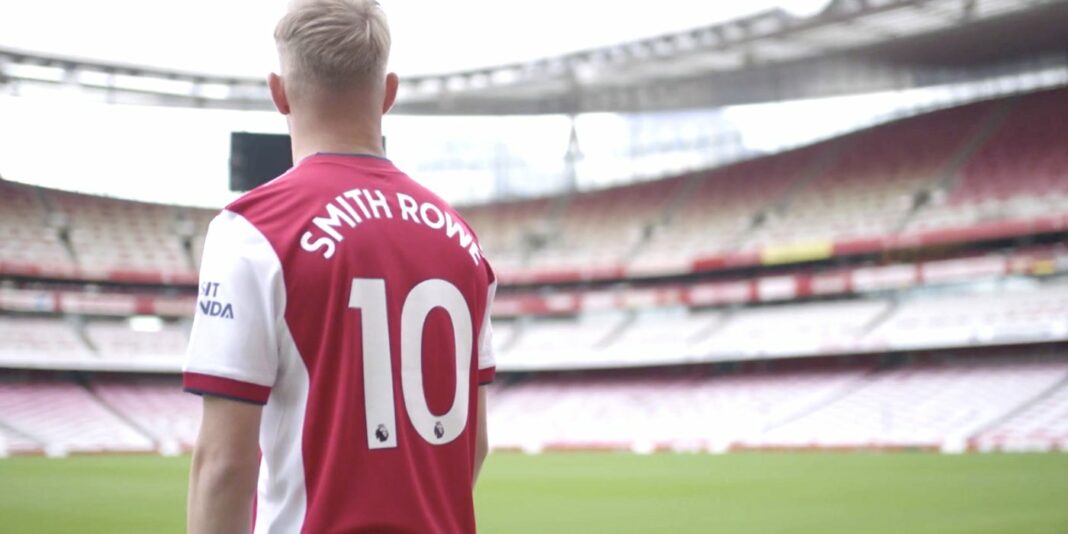 Emile Smith Rowe is Arsenal’s new number 10. Accompanying the announcement of his new contract came the change of number from last season’s 35.

The 20 year old follows in the footsteps of such luminaries as Dennis Bergkamp, Jack Wilshere, Mesut Ozil and Paul Merson.

Smith Rowe had been the subject of bids from Aston Villa this summer, but they were rejected out of hand with Mikel Arteta insisting, “Yes. He will stay here. 100%.”

So, now he inherits the creative midfield mantle and the responsibility that comes with such a number, not that it looks like it will faze him one bit.

“Everyone knows that No 10 is a big shirt and it is definitely a big position as well,” he told the official website.

“So I’m buzzing to be honest, I can’t wait to get on the pitch. It’s really special – I can’t explain the feeling when I found out. I’ve not really got the words to explain it right now!

“The legends that have played here and have worn the shirt… it’s a bit too much right now but I’m sure I will calm down after a while!

“When I was younger I used to watch Dennis Bergkamp, and when I was going through the academy Mesut Ozil was here as well and getting the opportunity to train with him and play with him as well was unbelievable.

“I just want to keep working hard and hopefully I can play like them and replicate what they’ve done.”

He deserves it. good luck my friend, we love you!

He’s the future. The new Bergkamp.

These three boys are going to bring us out of the dark ages.

Our win rate with ESR in the team is much better than without. Great news, look forward to that continuing!

super chuffed by this (like a new signing chuffed)

Salt from villans. As if he would go to them.

Lettra
Reply to  The half

They can try for Haaland .. or Messi or someone . Our lad is staying here..

No love for our greatest number ten William Gallas?

We don’t do numbers very well lol. Let’s hope Martinelli gets 11, wouldn’t be surprised if they gave it to our third keeper though

Always thought that Gallas was the worst signing every made by Wenger.

That accolade, my friend, goes to Shkodran Mustafi.

At least with Gallas in the side we maintained our top four status.

In Mustafi’s first season we dropped out of the top four – and we’ve never been back, largely due to his serial cockups.

Squillaci? At least Mustafi scored a goal in a North London Derby win.

Oh cod, was he awful.

We are a bigger club than VIlla.

Never thought that we will compare with Villa one day. Anyway it’s a wonderful news. It seems that we are progressing. More wise signing please.

Sadly, back in the late eighties Villa won the league on a couple of occasions, once at “The Home of Football”, also known as Highbury Stadium.

It felt almost as bad as the thought of them getting ASR.

The mid to late 80’s mainly saw Everton and Liverpool winning the title.

Just wish he had ‘The Smith’ written on this jersey.

A M
Reply to  ChickPEA

the smith hammers one home from distance!

Play like Bergkamp, aka God, and replicate what he’s done. No pressure at all. Good luck to him, Saka and Tierney. The jewels in our crown.

Down voted by 3 christians or Sp*rs fans

Hmm, you have 3 downvotes. As they haven’t repented, they must be spuds.

Well deserved. Hope he sticks around a long time!

Don’t forget he Follows in the footsteps of Gallas! Some big whinging boots to fill right there.

Boom! Fantastic news…….can’t help thinking the Florida away day cancellation is a good thing, so we can focus on the rebuild and other new signings atm

Agreed too much more work to do here.. Although its not great for gooners in the USA, or our bank balance I guess

Yeah I know, but we can go next year when things have improved on and off the pitch hopefully !

Buzzing for The Smith! He deserves his new contract and im pretty sure all Gooners will be cheering him on for many years to come. It does however raise the question on whether the plan is to play him behind the striker in the traditional 10 hole or are we still pursuing a senior high profile signing to play this position as we all understand is the case.. does this high profile 1st team signing then get discouraged by the fact that he’d need to choose a different number? dont get me wrong, the prospective AM signing should be playing… Read more »

If The Smith could put on the number 32, who is he to reject it?

Good point, though even Cristiano had to accept number 9 when he went to Madrid. Plus number 8 is still available.

Does this mean that’s it with Madders???

More likely shows was never real to begin with, would expect the #10 to be part of any deal for him.

I’m obviously happy to be rewarding young talent….but lately, almost everyone we have rewarded has turned to the sh***rs!…PEA, Ozil…heck even Wilshere at some point….I really hope this works out….but I really cant shake the feeling that we keep yielding to player demands too easily…. ESR is still young, and will be going into his second season…are we happy with rewarding potential?? does this signal that this is the best we can do, in terms of quality, at attacking mid??….are we saying anyone other attacking mid signing would be backup to ESR??….maybe the longer this dreadful transfer window drags the… Read more »

Breath brother, breath. We’re all afraid and anxious about the new season too, we’re just doing a better job being excited that we’re afraid than you are. Try a little daydreaming. I believe for example, that Arteta is building our champions league winning team. Think about it… I hear Sambi is injury free Diaby, Willock is Ramsey progressing without the leg break, AMN can be better than Trent of Liverpool, I’ll give him the number 3 shirt if he can be convinced to make that inverted rb position his own, white at the back with Gabriel, Captain Tierney! Our spanking… Read more »

ESR has quite an injury record, and Partey was ‘injury free’ before he joined us….but hey, I guess Elneny is now Vieira

He’s worked hard to become a first team player. He was the lowest paid player in the squad, on something like 8k per week, but one of last seasons most influential.

He’s not being rewarded for potential

But he hasn’t done it over multiple seasons….he’s just had one good breakthrough campaign…
I’m not slagging ESR, but I just hope we are not getting carried away..

For the supporter of a club that’s slowly sinking lower and lower in the league you for one do have some truly high standards of who should get a contract and a jersey.

Explain how is being happy for a potentially incredible player from the academy is getting carried away?

If ESR had been bought over from Dortmund after paying 50M+ would that warm your socks?

Because that’s his current market evaluation.

Essentially that is my point. Arsenal is a massive club…despite its recent dip…and because of everyone around the club seemingly accepting lower standards we find ourselves sinking lower and lower…

I’m not saying I’m not happy for ESR, but I simply highlighted how poorly the previous no.10s have performed and hoped that he would be much better

And honestly, I don’t think Arsenal would pay Dortmund (your scenario) 50M+ for a 20yr old Att Mid who has just had one breakout season…and then give him the no.10 jersey…

but hey, here’s to hoping for the best…

It’s just a jersey number really and a new contract more fitting for a first team player. I understand your reservations but it’s not like he’s been given life peerage or the deed to Arsenal stadium 🏟.

I read somewhere Maddison saying that he sees himself more as an 8. That could solve the issue.

Villa fans were becoming too cocky. That’d teach them to know their place.

The decision to let Emi Martinez go to Villa makes Edu & co. look like the fools that they are.

I just assume downvotes are from our Colombian gooners 😂 ‘vamos, baila ahora¡’. What a character! Imagine Leno doing that ever?!
Big man just won the copa America against Brazil. And now Leno’s here one more year at most. But yeah,
Edu & co did real good here cuz we can all see Ramsdales always been the better option anyway.
For that alone, I’d be cocky too if I was Villa haha Martinez now 4x barely 1.5 year ago. And Leno…

Get in! Onwards and upwards.

We sold the wrong keeper.

Fabulous news! I’ve been holding off getting the new shirt. Now I can go for it!

Villa we’re taking the piss trying to sign him in the first place. 5 minutes of good performances and a bit of extra cash does NOT constitute to them trying to muscle in on our players like they are Barca or Real. Reminds me of when city first got their money and immediately tried to sign KAKA… at least they tried to bid 100m for him, which was astronomical then. Yes, historically Villa are known but the whole thing was insulting especially the fee touted. Stay in your lane and hand over Grealish to a better club whilst you’re at… Read more »

Is it just me, or does the new Arsenal jersey suddenly look more beautiful with this name and number?
Congrats boy.

He now wears the number 10 of The Arsenal – the dude is a man.

You don’t know what you’re talking about mate.