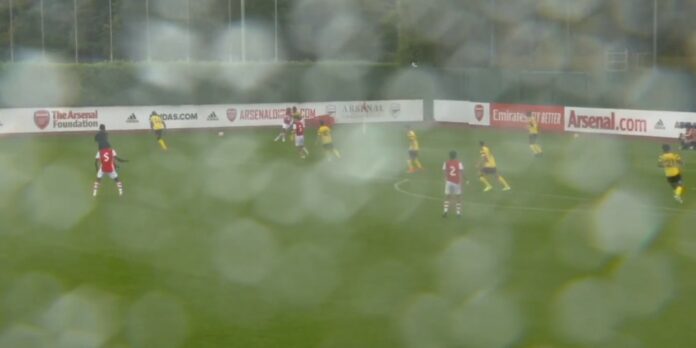 Arsenal stepped up their pre-season preparations with a 4-1 win over Watford.

Organised at late notice following the Gunners withdrawal from the Florida Cup, the match was played behind closed doors in the rain at London Colney.

The Gunners started with the likes of Bernd Leno, Nuno Tavares, Sambi Lokonga, Willian, Reiss Nelson and Pierre-Emerick Aubameyang on the field and went on to make a host of changes at the break and just past the hour mark.

We were level at half time when Philip Zinckernagel cancelled out Eddie Nketiah’s curled opener but made our dominance pay in a slick second half.

Alex Lacazette restored Arsenal’s lead from the penalty spot on 69 minutes, Kieran Tierney tapped in from close range and youngster Miguel Azeez rounded things off from range. We might have had a few more late on were it not for some decent stops by keeper Rob Elliot.

The Gunners have two more friendlies scheduled before the Premier League campaign starts against Brentford on 13 August. We face Chelsea at the Emirates on Sunday and then travel up the road to Spurs the following Saturday.

Spurs 1-0 Arsenal: On the whistle observations

Oof, that second half. Should’ve been six or seven. Special shout out to the cameraman wiping the raindrops from the lens. Old school legit!

It was shown on arsenal.com for free.

And Elneny gave Watford their goal.

To be fair, he did play a decent elneny-game.

Sure, though he did a Xhaka-like giving away of the ball in his own penalty area.

A fact, sorry for including that here!

What does that even mean?

I love that despite not knowing what it means the reaction to this has been unanimously positive, like it just feels right.

Oh my goodness, this is genius.

Mmmm there has been a bit too much Willian and Kolasinac this pre-season for my liking.

They’re in the shop window….unfortunately Willian’s is Greggs

It will be very painful for Willian and highlight how out of touch Arteta is with fans if he brings Willian on when we are losing, he got away with it last season as no fans.

Oh, FFS give it a rest.
Like you just discovered something….
Good grief.

Shut up Homer. I’m here for it Murph, carry on.

Yes give it a rest! It’s obvious no one wants Willian around anymore, it was a bad bad buy. But moaning about it every single opportunity changes nothing! Even when Willian has a decent game, we take the opportunity to point out all the things he did that were not good. At least wait until he has an actual bad game! Maybe it’s just me but I start to feel bad for players that are getting bashed at every, and any opportunity, even when they are not doing so bad. They are still humans, and come across all these comments… Read more »

Hey eggs. I don’t condone anybody going in two-footed on Willian. The abuse on social media towards him and his family was despicable. However, Murph’s comment wasn’t just piling on – it’s about how things will be different with fans in the stadium. If performances don’t improve, the boos will be audible and both player and manager will have to deal with that differently than last season. As for Homer’s disrespectful comment, I’ll leave you with the words of Mike Tyson: “Social media made you all way too comfortable with disrespecting people and not getting punched in the face for… Read more »

The Beast
Reply to  ...and really bad eggs

It’s not just you. You’re in good company.

Apart from being exhaustingly tedious & unoriginal, it’s mean spirited just for the sake of it. No one on here knows any of the players personally yet feel they have the right to dish out abuse behind an anonymous username.

Spotted this afternoon on a yacht in Monaco eating a caviar and broccoli salad with Cesc Fabregas, Vito Mannone, Arsene Wenger, and Gilles Grimandi.

But also spotted yesterday sitting on a park bench in Newcastle drinking Carling and eating a kebab with Steve Bruce, Jimmy Nail, Ant, and Dec.

I’m putting some money on Watford to be relegated.

Nice little interview with Rob Holdini over on the Guardian, but in it, the author writes:

What language is that?

The Beast
Reply to  Mayor McCheese

Might not believe it if you spent much time here but yep, 3rd best defence in the league.

Yep. Everybody seems to think it was out defence that let us down last season but it was our attack. Our defence was not too bad at all but because we did not win games because we were not scoring people make the assumption that we are terrible in defence.

The Arsenal
Reply to  Chris

midfield is the problem.

Who seems to thinks that?

It was quite clearly the turgid, soul sapping shite we were producing in midfield and up front that so hard to watch.

Auba not finishing anything, Lacca and Willian looking out of shape and slow, Pepe not getting played etc etc

But the reason why we were so lacking in attack is because of how good our defence was.

It isn’t really about our back four, it is our style of play, it is our midfield that makes it harder to create chances against us but the downside is they are creating much for us.

So changing the midfield to more attacking style will see us leak goals unless we get the balance right – Hence why we are signing White.

Sounds weird for a team that finished 8th, but yeah, that’s actually how it went.

Love the new pressing energy from the team. Looks like pre-season has done Arteta’ team a load of good.

Let’s hope the more time afforded by a lack of European football can be utilized to our advantage during the season.

And oh, Lokonga looks like he is going to be a complete midfield beast. I hope it all falls into place for him. Loved the look of Partey and Tierney (he has grown into the side even more).

Lokonga looks the part. Let’s still get a quality number 8, but what a player to come straight in……especially when Partey is off to AFCON. Great buy

I think Neves would be great for us in there, but doesn’t seem to be much movement. Be gutted if he went to Utd or Spuds instead.

What is worrying me is no sales yet. How are we looking in squad size Vs home grown quota.

The lack of sales has been a major worry. I thought by now a lot of players we no longer need would have gone. But an alarming number of them are still around.

It has been a strange transfer window, not helped by the different summer tournaments.

Yes, a more experienced 8 would be wonderful to have

How was Azeez? I saw him in a game a while back with the first team and he was promising. Can he make the step up?

I want to know as well. He’s such a technically sound player with sauce

Not a game to get carried away with. He was decent I think. Highlights: when he gave the ball away just as he got onto the field which could have been costly and when he scored a brillant curler as well.

I was intrigued to see that Azeez was wearing 35, which is Martinelli’s number. It may mean nothing, but I’m wondering whether that means he has been promoted to the senior squad (they have numbers 1-35) and Martinelli is getting a new number.

Having said that, I just saw some pictures with Harry Clarke wearing 35.

If you are confirming the math or doubting Partey goals, you have serious trust issues.

Two goals for Willian is implausible. Especially as the same as Tierney.

Please can we have your predictions for every league and cup fixture, including XG and possession stats? We all have bets to place before the season begins.

Break out season from him incoming.

Damn, you’re getting my hopes up, Djourou!

But all seriousness Djourou not think he’s looking sharp?

He’s walked into my FPL team team along with ESR. 🙂

Owen Goal level at 6 with Martinelli and Saka? How much game time do you think he’ll be getting?

Lack of clean sheets is a tad worrying;

All goals our own fuck ups. Not once were we carved open.

Dave
Reply to  The Arsenal

Does that make it any better?

Another vaunted Willian “assist” – a ball from the center line (admittedly a good ball to Eddie) where the passee needs to cover another 30 yards and beat two men on his own, and uncork a nice shot.

Willian assist was worth about 1/100 of that. And that’s being kind, really.

Oh, FFS give it a rest.
Like you just discovered something….
Good grief.

I never got into DP vids. Doesn’t look comfortable for anybody involved, you know?

This website uses cookies to improve your experience while you navigate through the website. Out of these, the cookies that are categorized as necessary are stored on your browser as they are essential for the working of basic functionalities of the website. We also use third-party cookies that help us analyze and understand how you use this website. These cookies will be stored in your browser only with your consent. You also have the option to opt-out of these cookies. But opting out of some of these cookies may affect your browsing experience.
Necessary Always Enabled
Necessary cookies are absolutely essential for the website to function properly. These cookies ensure basic functionalities and security features of the website, anonymously.
Functional
Functional cookies help to perform certain functionalities like sharing the content of the website on social media platforms, collect feedbacks, and other third-party features.
Performance
Performance cookies are used to understand and analyze the key performance indexes of the website which helps in delivering a better user experience for the visitors.
Analytics
Analytical cookies are used to understand how visitors interact with the website. These cookies help provide information on metrics the number of visitors, bounce rate, traffic source, etc.
Advertisement
Advertisement cookies are used to provide visitors with relevant ads and marketing campaigns. These cookies track visitors across websites and collect information to provide customized ads.
Others
Other uncategorized cookies are those that are being analyzed and have not been classified into a category as yet.
SAVE & ACCEPT
wpDiscuz
70
0
Would love your thoughts, please comment.x
()
x
| Reply