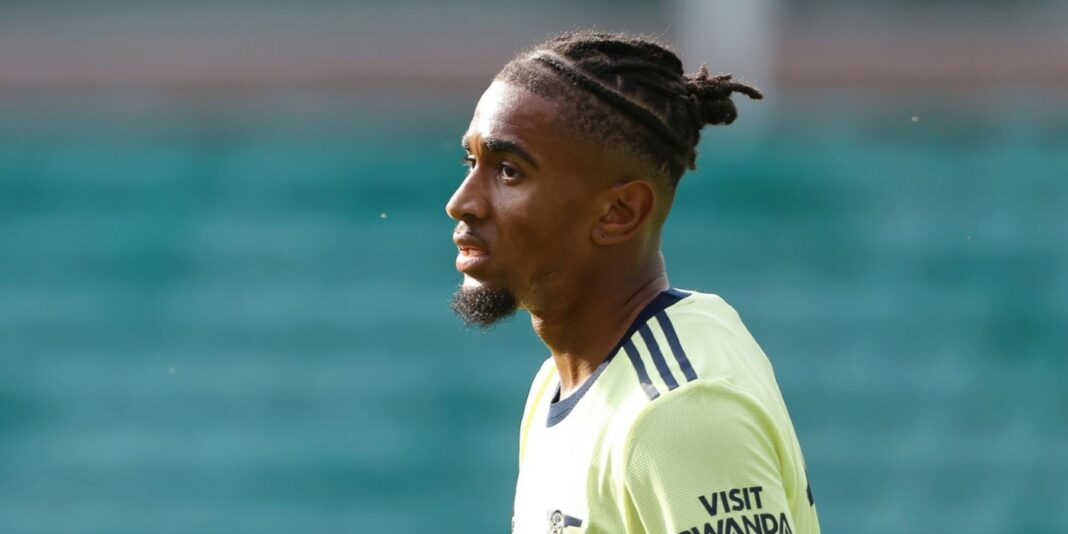 According to James Benge, writing for CBS Soccer, Reiss Nelson is attracting attention from several Premier League clubs as he wavers on signing a contract extension with Arsenal.

Mikel Arteta was keen for the winger to head out on loan this time last year but the England under-21 international opted to stay at the Emirates to fight for his place. The decision didn’t really work in his favour and he ended the campaign with only nine appearances to his name – all of them before the end of January.

Having fallen behind Emile Smith Rowe and Bukayo Saka in the pecking order, Nelson has a big decision to make about his future. He’s a talented boy who knows he needs to kick on which is why he’s likely taking reported interest from Crystal Palace, Brighton and Brentford very seriously.

Off the back of his decent spell with Bundesliga side Hoffenheim, there are also clubs in Germany keeping tabs.

Benge reported earlier this month that Mikel Arteta wants to protect Nelson’s future value by offering him a contract extension before offering him out on loan. If he decides against that, it’s likely a permanent sale will be sanctioned with the player having only one year left on his contract.

The Gunners are also yet to decide on the fate of Joe Willock. In midweek, Mikel Arteta touched on the situation saying: “Joe is part of our plans, he’s our player and in the time that he is here we will try to make the most out of him.”

The second half of that sentence doesn’t seem nearly as definitive as the first which has sparked hope at Newcastle that we might be open to another loan or even a sale. Seven goals in seven consecutive Premier League games ensured the midfielder became a Geordie hero during his recent loan spell on Tyneside and manager Steve Bruce has spoken openly about recruiting him on a permanent basis.

The Telegraph (£) claim a loan is the most likely option with Arsenal, as is the case with Nelson, offering a contract extension first.

Feels like a wasted year for Reiss. My heart wants him to stay and hope he suddenly plays well. But, a new environment seems to be the best for both player and club, sadly.

I still feel like he can make it for us. I know it’s probably just sentiment, given what he has shown so far, but he is so technically talented. He needs to learn to impose himself on high level games, as he has really struggled for decisive contributions in the chances he’s had. Probably best for us (and maybe him) if we can extend him and give him a year at a PL club, if we can find one that will give him games (maybe too big an if). Then it’s on him to find his feet at senior level.… Read more »

He looked our best player again Hibs. Good movement, good on the ball and very progressive with the ball. How Willian gets a look in over him is mind blowing.

Egomaniac Arteta doesn’t want his idea of bringing in Willian seen as a failure.

After seeing such wonderful touch and footwork when he was 16, I was always really hopeful. However, a lot can happen, so if a sale is seen as for the best its hard to make more than a romantic argument against it. Nonetheless, I would still be footballingly happier with full season loan to really give him a chance to visibly stake a claim.

Thats the trouble with assessing the abilities of youth players. They look great at that level but its the ability, attitude and mental strength to step up to Premiership level that curtails their careers. Some do very well like Saka and Smith Rowe but most end up playing at a Championship or Division One club or failing completely – its very tough to get into that is for sure..

Willian was one of the biggest blockers to Nelson getting minutes for Arsenal in my opinion. Would rather have given Nelson some experience and opportunities than the old timer.

It’s like paying way over the odds for a piece of shit car that’s long past its life span. You have no other choice but to try and get as much as you can out of it.

Even if he played off decent last season, we just didn’t need him. We have Auba, we have Nelson, we have Pepe, we have Saka, we have Smith Rowe, we have Martinelli… More options in wide positions than you can shake a stick at. We simply didn’t need to buy him. Complete waste of money and really destructive for young up-and-coming talent. Up there with Park Chu Young, Junici Inamoto and Igors Stepanovs as Arsenal’s worst signing ever.

Is it true that Wenger purchased Park Chu-Young to help his former club Monaco with their finances after they were relegated?

He also blocked pepe and martinelli getting playing time. Pepe was brilliant the tail end of last season, just think where we could of finished if he was starting earlier in the season. I like nelson, i think he just needs his chance but i cant see it under arteta. For his career it would probably be best for him to leave, i just cant see him getting the minutes. Its a shame because i think given the chance he would be brilliant

Something really stinks here.
Unless Arsenal stop ####ing around with Willian, then the smell just lingers.
Nelson may never break through at our beloved club, but the fact that his chances are reduced by Willians presence, really is shameful.

The way I see it is that if he is good enough and has what they want then he will break into the team. Obviously he has ability, as seen in his time in Germany so there is something with his attitude or some other aspect of his personality that stops him from being selected…

I can’t believe Reece has stalled with so much natural talent. Maybe a loan with deal extension isn’t so bad.

Meanwhile in another part of the footballing world. Giroud has left Chelsea and signed for AC Milan.

Good. That has to be one of the most galling transfers of all time. We’ve taken a load of their shit players and we practically gave them a player who, while never amazing, was regularly effective. I’m glad he’s left them.

I’ll never be as sad as I was when Merson left though, but then I was only about 13…

You should have been around when Brady n Rocky we’re sold. Now thats heartbreak

Does he have 1 or 2 years left on his contract?

Can we loan willian to nandos for the season instead?

He’s already done a deal with Greggs by the look of it….

i still like this guy, hope the best for him whatever happens

Separate from whether we’re committing Gnabry-esque levels of mismanagement of our young talents, someone should have a chat with Mikel about how he speaks about players to maximize their transfer value.

Saying ESR is “100% staying” while on the other hand saying “we’ll make the most out of Willock as long as he’s with us” isn’t the best way to maximize Willock’s price if he actually does want to sell. The transfer market is akin to a poker game and Mikel would benefit from some improvement in that regard.

I am interested in how you know this. My own guess–and it is a guess–is that everyone pretty much knows where everyone stands and what they need. So not like poker at all. More like an actual market.

Goo-nerd
Reply to  A Different George

How do I know this? Ermm observation? Life? Sales isn’t intuitive for everyone. As a club we used to be pretty decent at making stars and selling them for decent prices when we had to. The decline and the behaviors accompanying them are plain to see. How did Daniel Levy get 20m for Christian Eriksen who had 6 months left on his contract? How did Liverpool get 19m for Jordan Ibe? And 24m for Rhian Brewster? They definitely don’t go around telling people “we’ll see what happens with this player.” With that kind of talk you’re inviting low-ball offers. How… Read more »

Off piste question : Aouar or Ødegaard ?? Aouar for me all day at £20m…

Definitely Aouar as he can actually play in central midfield. £60 million for Ødegaard also feels like daylight robbery when you compare it to the fee you’ve mentioned.

Neither are world-beaters yet and I think the hype around these players was unwarranted at times. However, both are the same age (minus some months) and have a lot of potential.

The phrase I have a bridge to sell you comes to mind when I think of Arteta and Edu. Not only that I can see ol’ Gil from the Simpsons selling the bridge to them.

It seems quite strange to me that he didn’t play more last season. When Arteta took over, Nelson started the first match, in the league as well! Perhaps even the 2nd or 3rd ones too. Seemed like Arteta really liked him and wanted to use him. Then he just totally fell away and barely played. Admittedly he didn’t make such a big impact as ESR or Saka on the first team, but I always thought he looked decent, scored some goals and was a useful player. Like others said, Willian obviously blocked his path somewhat last season, but to go… Read more »

It’s also possible that Arteta just played Nelson simply because that’s what he had his disposal. We saw something similar with Willock. A good number of minutes turned into a treacle and then eventually a drought.

I remember that Mhkitaryan was also on loan at Roma by that time which probably afforded Nelson more game time last season.

Should’ve given him a chance like with saka and esr. He deserved it. Arteta doesn’t know how to develop or mentor young players, despite different reports coming from citeh. We have high potential players in the club and we’ll lose them or waste their potential. Sad.