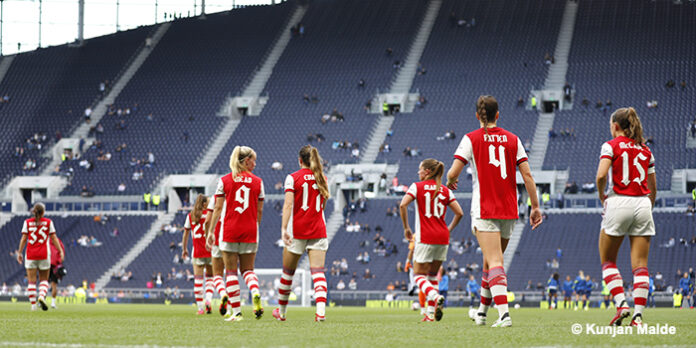 Arsenal Women have been drawn to play against Slavia Praha in a two-legged Champions League qualifier in order to qualify for the group stage. The Gunners already defeated Okzhetpes and PSV Eindhoven in Moscow to graduate to the final qualifying round.

Since they are unseeded, Arsenal could only face one of Lyon, Wolfsburg, Slavia Praha and Jonas Eidevall’s previous club Rosengard. They will play in a home and away leg, with the ties to be played on 31st August / 1st September and the return leg to take place on 8th / 9th September. Either side of these legs, Arsenal kick off their WSL season against Chelsea at Emirates Stadium (tickets on general sale for that here.

Arsenal will play the first leg at home at  Meadow Park and the second leg will be away and take place at the Simone Stadium in Prague. The tie pits Arsenal against a team they beat 13-2 on aggregate in the 2019-20 competition.

Came here to say this!

Phew! Glad we dodged the Lyon / Wolfsburg bullet!
Still, Lyon are not the holders any more and appear to be in a time of transition so perhaps if we had to play them now would have been a good time.

Perhaps it would have. Glad we don’t have to find out before the group stages…

Yep, same. I think that both Lyon and Wolfsburg are weaker than years before, but I just don’t want us to have our most important games of the season in the beginning of September. Specially because we have Chelsea in between those. Now I am quite happy that we start off against Chelsea. We should be much more match fit for that game and no disrespect to Praha, but we can rotate mainly with Chelsea as a first priority.