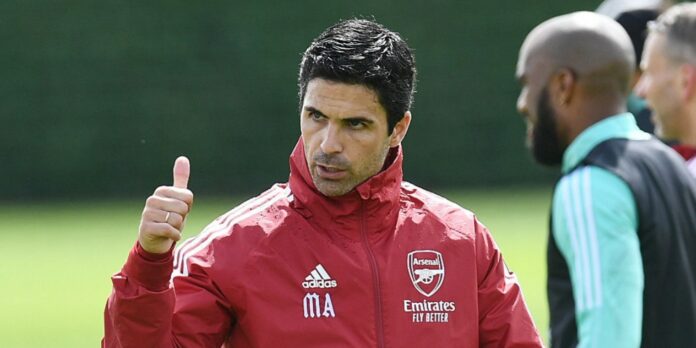 Mikel Arteta says he had no say in the decision to invite an Amazon documentary crew to film behind the scenes at Arsenal but he’s hopeful the club can use the opportunity to showcase its values.

Confirmation that the Gunners would be the focus of the latest instalment of the popular “All or Nothing” series was met with a mixed response from supporters who question the timing after recent problems on and off the pitch.

Arsenal will be paid for taking part and the club will have a say in what makes the final cut so we can only assume our owners have weighed up the possibility of looking like plonkers versus the chance to reach new supporters with a polished presentation of their prized football asset.

It’s not the first time that Arteta has been involved in such a production. He was at City when Pep Guardiola’s squad were also followed by Amazon cameras and he seems pretty laid back about the whole venture.

“No,” he said when asked if he’d been given a choice in taking part. “That’s a decision made from the club and it’s with the best possible interests of the football club. We need to help as much as possible.

“I experienced that a few years ago when I was at Man City,” he added. “We’re going to help as much as possible to help everybody see what this club means; how things are done at the football club and to be as transparent as we can to show the values, integrity and the passions and where we are trying to drive this football club.

“Hopefully, it’s a perfect year to show that. We need to make that happen. It’s down to us to produce the best piece that we can so everybody can feel part of what we do and our fans can be proud of what we do.”

Given he can be a little tetchy when facing the media before and after matches, it’s hard to gauge how much Arteta might give away on camera. When Sp*rs were the subject of “All or Nothing”, Jose Mourinho didn’t mind performing for the cameras in his office but footage of tactical matters were few and far between.

Asked if he’ll be watching what he says on camera, Arteta replied: “I think I’ve been very transparent since I’ve been here. I have tried to respond to every single question but if you ask me about things in the dressing room, I’m sorry but that door is completely closed.

“For the rest, I’ve tried to answer to the best of my capacity and while they [Amazon] are here, we’re going to try to be us, not somebody else. We try to be us and show what we do.”

For more on what Arsenal fans can expect from “All or Nothing”, we’d recommend reading this feature by writer and producer Ed Avern.

I can finally see a positive to this. What is auba if not a show off, cameras on him could push him to perform once more where money perhaps no longer?

Which Gunnersaurus though? It’s being played by a cast of different actors this year. Week one is Paul Mersonasaurus – turns up half cut with betting slips falling out his pockets Week two is Anelkasaurus – 5 minutes of the best mascotting you’ve ever seen before his brothers slip a Real shirt over him and bundle him out of the stadium never to be seen again. Week three is Jens Lehmanasaurus. My favourite. Does a few rolly-polllies before saving every one of the junior gunner’s half time penalties. On the last penalty boots the ball in the face of penalty… Read more »

This seems like a very bad idea – especially given the current state of the club. Remember how embarrassing the Sp*rs series was? Prepare for payback!

What’s embarrassing about seeing more of your team. If it sucks, it sucks. This is the closest we will get to hang with the team…

An absolutely unwanted distraction surely. I wonder when he’ll get to manage in an actual normal season without a distracting side show going on (insert Luiz gag here).

Yes not a bad idea but just not the right timing. I guess for amazon it’s perfect timing because of the tension us fans are already feeling/anticipating!

But imagine this series during the Invincibles season. Now that I’d enjoy! But maybe because we already know how it all goes haha

Predictions for next season if the squads remain as they are now.

I think that’s a very realistic outcome if things remain as they are. Instead of them working on this Amazon nonsense they should have been sorting out our midfield and forward line.

Wow. Not only is your glass half empty but the other half is filled with piss.

Realistically what have Everton, Villa and Leeds added to finish above us?

Can’t see Chelsea winning the league. They’ve spent an absolute fortune on their forward line so guaranteed top 4 and shoe in for a cup. Can’t see Tuchel getting enough from them over the course of a season though.

City tough to beat this year. Especially I’m when Kane gets back from his career break in October.

Surely though between us and Leicester for 5th?

Yeah, I don’t think Leeds, Villa or Everton will finish above us (no doubt this will come back to bite me). Leeds squad is still too small, Villa have lost their midfield from last season and Everton are even worse at recruiting than us. Not to forget they have that unconfirmed paedo (that everyone knows who it is) case going on.

Distraction we could do without

Oh I don’t know. Should be quite a laugh. I’m looking forward to it.

I’m not happy about it but the £10m will come in handy.

Yeah. That should keep Willian in biscuits for a season or two.

Handy? How can you be sure this money will be put towards strengthening the squad rather than a couple of new exotic cows for Kroenke’s ranch?

I don’t know about a documentary, but, for me, the Amazon symbol looks like an erect penis.

I can’t say I’d noticed… I wonder what Mr Freud would have to say about you seeing willies everywhere (not you Willian).
That said having seen Mr Bezos’ rocket, maybe you are onto something.

McCheese is right. It’s all about Jeff’s pecker.

The arrow is clearly a PG friendly dick doodle.

And the rocket, I mean clearly the biggest piece of insecurity ever witnessed by mankind…

Everything looks like a sandwich to a starving man.

I work in the film industry as a Director and I’m an Arsenal fan. Knowing how these things work – there will be a schedule for filming – where the presence of the crew at specific points in time will be mapped out well in advance with everyone’s knowledge. These things are rarely unorchestrated. It won’t be a film crew hanging out 24/7 filming as much as they can, hoping to discover something salacious. They won’t suddenly appear in the middle of the training ground and disrupt a drill. It will be planned and it will be controlled, like most… Read more »

Arteta appearing again as the focal point in All or Nothing is like those characters that get their own spin-off series.

If 10m gets us the next Martinelli, or whatever gym programme Azeez was on in the summer, why not?

I want to see more of my team and since I’m not so invested in social media – this is a very good development as far as I’m concerned. My favourite stand out moments from the Spuds season: That RB spilling coffee into Jose’s shoes Delle’s toothpaste wetting conundrum Kane being told and believing he is as good as Messi Levy looking more and more like Mini Me and less like Dr Evil From Man City: Pep’s dressing room squats Arteta being roasted by Pep before the Arsenal match Aguero’s lonely life That simpleton kit man BTW, any Ted Lasso… Read more »

We invited cameras in at our lowest point. What idiot does that?

Although we might gain sympathy “aww” fans with our inevitable struggle.

Slow to start, slow to finish

Can’t believe the richest man in the world’s name is Jeff. Shirley he could have afforded a name change to, say, Rich … or Leslie?