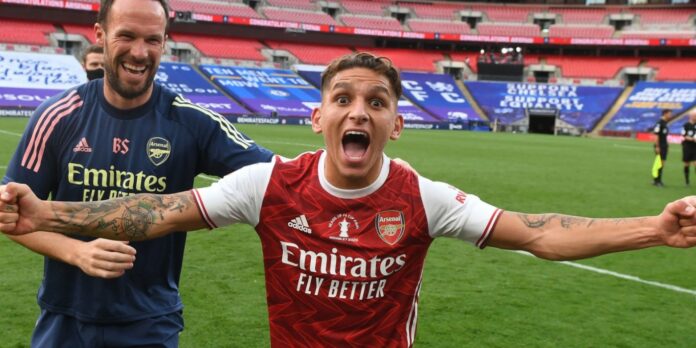 Fiorentina have signed Lucas Torreira on a season-long loan and will have an option to buy the midfielder next summer.

The 25-year-old spent last year on loan at Atletico Madrid – he played only 502 minutes of their championship-winning campaign – before returning to England last week via the Copa America and a quarantine-avoiding training camp in Spain.

Back at London Colney, he was told he was surplus to requirements despite reportedly pitching his services to Mikel Arteta.

A host of Italian clubs, including AS Roma and Lazio, enquired about him but it’s Fiorentina, who flirted with a deal last year, that have won the race for his signature.

Torreira made 50 appearances in a promising debut season for Arsenal but things have not gone to plan since.

Signed as a holding midfielder, he lost the trust of Unai Emery in the Spaniard’s second season and, via a couple of untimely injuries and a drop in confidence, his form has been on the slide ever since. Out of contract in 2023, it looks very likely that he’s played his last game for the club.

Torreira spent four years in Italy between 2014-2018 and will be hoping he can regain the form that saw him move from Pescara to Sampdoria and eventually to the Emirates.

Have a great time in Florence, Lucas. It’s a fantastic city and a team with a lovely kit.

Report: Lazio still in the hunt for Torreira deal

Good luck. Hopefully you do well in Italy and they exercise the option to make it permanent. Our incompetent boardroom/technical director needs all the help they can get to generate positive transfer income from player sales.

Not another fucking loan

I believe the club’s preference is to sell AMN, Kolasinac, Nketia et all, but we have to be realistic in our expectations and accept that loans are a viable option.
We have all seen what a successful loan did for Willock.
When life gives you lemons…

I’ve always preferred Lemons to Oranges. Have you ever tried to drink a glass of pure fresh squeezed lemon juice. What a hit and the sugar rush at the end….. Orange is so meh.

…mix it up with vodka soda

You make a lemonade out of them.

Best of luck. Hope we can get some change from Florence come next summer.

You watch football matches with a tape measure?

Funny, last time I measured him on my screen, he was only a couple inches tall. Must be a late bloomer.

I prefer those laser measurers used by estate agents.

When I tried to measure Kasper Schmeichel at Wembley UEFA got the hump.

Sad to see him go. Don’t feel he did much wrong. Will always remember that goal and celebration against sp*rs. Good luck for the future!

He looks over the moon with the move though.

Burst onto the scene with some good performances. It all seemed to turn to poo for him when Emery started using him as a number 10. Here’s hoping he gets a permanent move at the end of this and we get a reasonable fee at the end

Any financial details?
Hopefully they will cover 100% of his wages (any loan fee doesn’t seem too realistic, maybe something small) with option to buy for 20-25M.

Good luck at Fiorentina, Lucas. Hope this loan works out for you.

All the best of luck imaginable his way. He’s obviously had an awful time since that first season with us, and it doesn’t seem as if he’s been particularly well looked after by the club. Hope he turns his career around, deserves it.

I think Arsenal have looked after him quite well

Honestly, i don’t understand what’s happening at Arsenal, Arsenal players keeps going on loan or they leave on free transfers. Does it mean these Arsenal players are unsellable? #Smh🤔

Will Edu & company learn from these troubles they have selling players, or will they continue to give every incoming player wages so high that they will make them unsellable if the transfer doesn’t work out?

We used to have a problem being competitive with salaries and actually had a long culture of paying relatively low wages (check out Adams, O’Leary, etc biogs) and losing out to competitors.

Unfortunately when we came into money it seemed like we turned into lottery winners and chucked cash at every signing.

To (mis)quote Mrs Merton “What was it exactly that attracted you to play for multi-million pound paying football club, Arsenal?”

Post COVID things *should* pick up again but I agree, hope they learn.

I don’t think Edu or Arteta have much to do with negotiating a players wages. That might be Garlick and Lewis.

No one outside England has any money due to the pandemic – except PSG and EPL wages are the best around. Barcelona are broke – they couldn’t hold on to Messi. Real are having a fire sale. Look at the the squads for Chelsea, Citeh and United – they all have surplus players. It’s just the market – anyway to offload unwanted players is good going.

Such a shame it didn’t work out. I loved his passion and enthusiam. Good luck, Lucas. Don’t eat too much fiorentina

Thought he would have been a good mobile ball winner ala Ngolo Kante, he looked good when I saw him. Therefore he had to go I guess.

Him wanting to leave and go home probably played a big part. Arteta not really seeming to have a clue probably didn’t help much though.

True. Emery/Arteta always seem to be given this PR sticker of ‘progressive’ coaches dedicated to attacking football but both are pretty negative and reactive. Good on them for defeating Man Utd, but Villareal in Europa Final were very negative and dull to watch. Not saying it’s not a valid style, but not what I’d pay to see and not what I’d want at Arsenal. Arteta sadly seems similar but less experienced and slightly insecure; liked him a lot as a player but as a coach I don’t think he’s what we’re looking for. I never think a manager should be… Read more »

He isn’t very mobile, that’s his biggest problem. Kante is rapid by anyone’s standards, but I think Torreira was Arsenal’s slowest player in speed tests a couple years back This was made worse when Emery pushed him further up the pitch leaving him with more ground to cover, he became like a kid trying to keep up with adults I think he could work as the most defensive in a midfield 3, but in a 2 he can’t cover the amount of ground necessary in the PL, without shifting too much workload on to his partner anyway Moot point anyway… Read more »

I had to look it up. Whatever measure was used, Sokratis was 3rd fastest behind Hector & Auba. Torreira was indeed last. Lichtsteiner was level with Xhaka, with Guendouzi, Elneny & Torreira making up the bottom 3. That measure also had Rob Holding ahead of Wellbeck & Ozil with the latter 2 very close in top speed. At face value I’m not sure how accurate these measures are. None the less, I managed to avoid working for 5 minutes so I consider it a worthwhile exercise. As for Torreira, he looked great in his first season but I can’t recall… Read more »

Your facts are most correct (Sokratis was faster than a lot of people thought). Torreira was slow and gassed out after every effort put in trying to cover ground. I liked him still (biased i guess but who cares 🤷🏾‍♂️🤣).

Yeah Sokratis takes a while to get up to to top speed, but once he does he can really shift that dad bod I think Welbeck may have been recovering from a long term injury then, could explain his relative slowness Those tests were based on top speed I think. Torreira is no doubt very quick to reach top speed, but has no top end. Which is great when you’ve only got a small area to control, i.e when the team has dropped in deep, or you’ve got 2 midfield partners doing a lot of the running. But when we’re… Read more »

Depends on the partner probably, but agree that he suits a 3 more than 2. I can’t say I ever noticed a lack of mobility but you’re right about him looking less effective pushed into more of an 8. He’s surely gone for good now so we’ll never know but was odd to loan him out after one season.

another mislintat signing bites the dust. don’t hear too many folks crying about “diamond eyes” getting the boot now.

Well he’s doing a fantastic job at Stuttgart now, and he’s on a whole other plane of existence to Edu/Raul etc. So yeah I do still cry about it sometimes

He knows the terrain so i wouldn’t expect less. He’s a novice when it comes to knowing what kind of player fits an england based club.

He pitched his services and got no change from Arteta? If that is true, that is somewhat disappointing!!! Surely he has to be able to offer more than certain players still with the club?

that was the bit that had my eyebrows raised too, as I thought that Torreira was the one who wanted out

When nobody else wanted him he came out with the “want to stay and fight for my place” garbage, after spending two years telling everyone he hated it in England and wanted to go back to Italy. Pathetic, weak minded player.

Best of luck to him. I always wished things would work out for him with us, and hope things finally come together for him. After the rough time he’s had, I think he deserves it.

With all my heart I want that man to be happy. Good luck lucas

Congrats, Lucas. Praying you win the Serie A with Fiorentina.

Is it just an option or an obligation to buy? Or is it the option with conditions that are guaranteed to be met