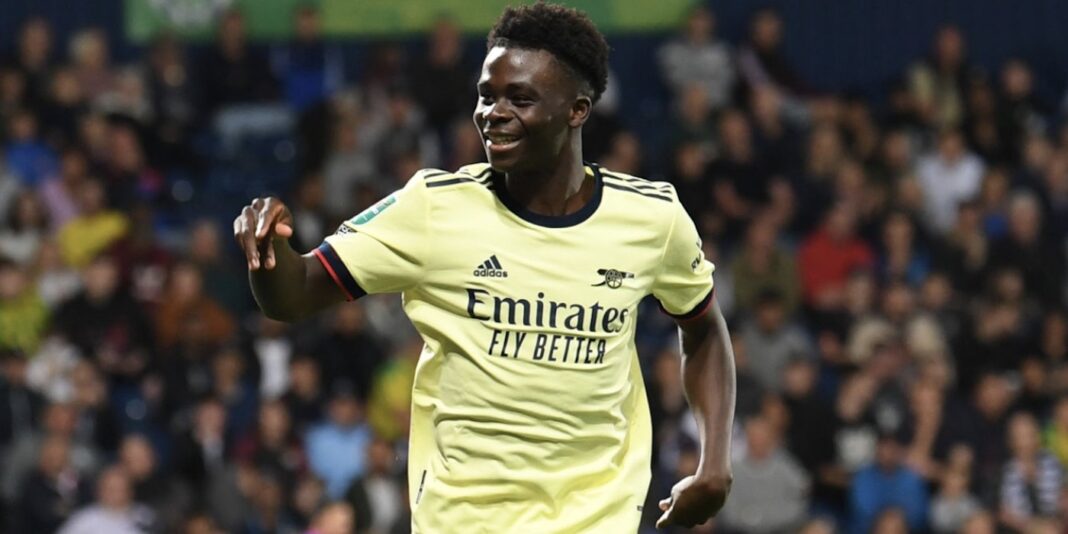 Arsenal have confirmed that Bukayo Saka is in full training ahead of Saturday’s trip to face Man City.

The 19 year old took a knock to the knee in the late stages of Wednesday’s 6-0 win over West Brom in the Carabao Cup, and there was some concern as to how he might be impacted. However, he has a clean bill of health and available for the game at Etihad.

Hector Bellerin is also in contention, having missed the last two games with a thigh problem, but it remains to be seen how Mikel Arteta will use his many right-backs.

Gabriel Magalhaes, who has been suffering from tendinitis of the knee, is also back in training, but it’s unlikely he’ll be thrown back into the team for a game of this intensity.

Nketiah has been linked again with a move to Crystal Palace, with reports of an £11.5m bid, an improvement on the £10m previously offered by the Eagles.

With the transfer window closing on Tuesday night, and Joe Willock the only substantial sale so far this summer, it could well be a tempting bid for a player who has less than 12 months left on his contract, and who has turned down an extension from the club.

my lineup for city, think we should set up defensively similar to Chelsea 1-0 last year. 3421

Wouldn’t mind pepe in for Odegaard on the right

I sincerely hope we don’t have a back 4 with just holding and mari. Thats a recipe for disaster. At least it’s not Mari vs Ronaldo just yet… also how come you think he’ll bench saka?

A Different George
Reply to  Jules

A back three makes most sense when you the opponents use two men up front (whether it is technically a 4-4-2 or not is irrelevant–Vardy and Barnes, for example); it makes the least sense when the opponent effectively plays without a 9, but with players like Jesus, Sterling, Mahrez, Gundegan, etc. etc. all capable of quick movements into dangerous positions. And a back three means two of Saka, Smith Row, Pepe, Odegaard, and Aubameyang cannot play.

Can’t bear the thought of seeing Mari again. I’d personally rather see something like:

yeah wouldn’t mind this at all, but I also just don’t think our back four is stable enough right now to deal with city. There will be extra pressure as well now that we’re missing partey in midfield as well. I think back 3 gives us the best chance given we’re missing our two main CBs, have 0 good RBs and are playing the best team in the league.

Someone has to hold Mari

Wonder if Ramsdale gets the nod for this one.

Leno for me. Ramsdale has not done enough to warrant being selected ahead of Leno.
That Lukaku point blank save is up there with the best we will ever see this season.

Very true, but I did love the way Ramsdale stayed strong on Wednesday to make 2 or 3 really good saves when we were already winning 3/4 nil.

I think it is good there is competition in that area now.
Back three or back four doesn’t really matter though. Even without De Bruyne City will have too much…

On a side note, we complain about nobody wanting our unwanted players and then Chelsea go and sell zouma for 25 million. I know it’s easier to sell castoffs when you’ve just won the champions league but Chelsea fans pretty much consider zouma to be their Mustafi. 25 million. Go figure.

For context – Same Chelsea have not been able to sell – Drinkwater, Batshuayi, Baba Rahman, loaned out Ross Barkely again.

Point being you can’t sell a player people don’t want. Esp when it’s obvious to everyone that even the fans of the said club publicly hate the player. Comparing Zouma to Mustafi does not work. Go to most Chelsea fan sites – you’ll see some fans actually moaning the sale. I doubt any Arsenal fan felt that way when Mustafi left.

So what you are saying is that fans bitching on public forums about players reduces their value. If that’s true (and it might be), perhaps we all need to keep our mouths shut