Arteta focused on getting more from Pepe not selling him

‘When I came back from injury I thought ‘you’ve got to fight for this.’ Arseblog exclusive with Jordan Nobbs

Boye played for new Head Coach Jonas Eidevall for two years at Rosengard and had been a target for Manchester United this summer, before deciding to join up with her former boss in North London.

In Jonas Eidevall’s pre-match press conference prior to the Gunners’ Champions League qualifier against Kazakhstani side Okzhetpes in Moscow, Arseblog News asked Jonas which qualities he thinks Simone could bring to Arsenal’s defence. 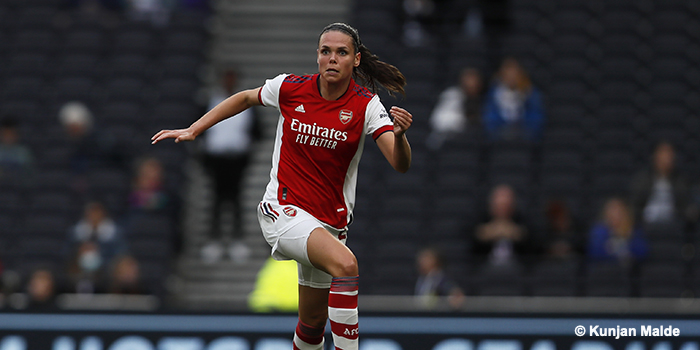 “I worked with Simone before and she has great leadership qualities, she is very calm and composed on the ball. In every sense, she is a team player and wants to do what is best for the team.

“We have good numbers in defence coming into a very congested playing schedule, especially in the autumn because we will be playing three times a week a lot of times. We will need to be able to handle that and be able to change players and not lose experience when we do. We want to perform at our best level in all competitions and she can help us to do that.”

Eidevall told the press on Tuesday that he wanted to introduce a style of play that involved “pressing with a good intensity and moves the ball at a high pace,” pointing out that he wanted, “not just to put the ball forwards all the time but at the right moment when the opponents have opened up.

“I would describe my style as high paced possession football but I want the structure behind that means we are not unbalanced when we lose the ball. Obviously every coach wants to see all of the things they have worked on working straight away but we have to admit that we are at the beginning of this process.

“Not everything is going to be perfect- it rarely is in football. What matters now for the stage we are at is that we need to try it and the reaction when we lose the ball has to be perfect and how we react to that situation. We need to be hungry to keep going after the ball and if it doesn’t work, we learn and we try again.”

‘When I came back from injury I...

Looking forward to the new season and it is better to have too many quality players than as we have been in recent seasons where we barely have enough to name a starting eleven never mind having any subs available!

Our Mid Field is really light.
I assume Iwabuchi was brought in as more of a MF than a FW ?

At the moment, yes, but he did say he was looking at bringing 1-2 more in and I imagine that would be in midfield.

Anything going on with the goalkeepers Tim? Really feel like having a solid first choice is what’s standing between us and Chelsea, it was strange that both goalkeepers got their contracts extended before Jonas arrived (and Manu got her’s extended presumably when Joe knew he was leaving). Manu is certainly talented but too erratic, and Lydia getting dropped for a young keeper with the Aussies doesn’t fill me with confidence.

I’m of a similar view.
For 2 years Fran Stenson has been heralded (not least by Joe) as Arsenal and England’s “future” number one, number 1. Then she’s more or less been ignored ( I appreciate a thumb injury curtailed her inclusion in the latter part of last season). Perhaps Jonas will take the plunge and give her the chance her patience had earned.

I’ve only seen Fran play a couple of times but she appears to have the confidence and physique required and have championed her cause for a while now. I know Joe rated her but then did not give her game time to develop even if that meant another loan spell. Let’s hope Jonas is more agreeable to playing some of the younger players in cup games etc. to ease the burden on the regular starters and perhaps also shake off this bloody injury curse! I agree it was odd that new contracts were being arranged when to the outside world… Read more »

Arteta focused on getting more from Pepe not selling him

‘When I came back from injury I thought ‘you’ve got to fight for this.’ Arseblog exclusive with Jordan Nobbs