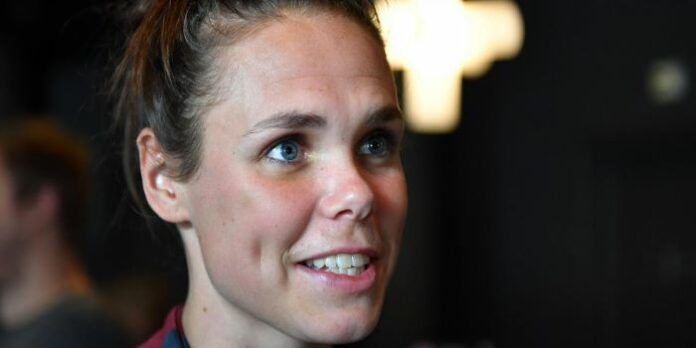 Sorensen was a key part of Bayern’s Frauen Bundesliga winning season in 2020-21 and also has 61 caps for Denmark, she won two Svenska Cupens under Eidevall at Rosengard before joining Bayern in 2019.

After concerns over the level to which Arsenal were prepared to invest in their women’s team, signing Nikita Parris from Lyon as well as another player from the German champions goes some way to allaying those concerns. She joins Manu Zinsberger, Vivianne Miedema, Lisa Evans and Viki Schnaderbeck in moving from Bayern to Arsenal.

“It feels really good to be here,” Simone told Arsenal.com. “I needed a new start and I’m grateful that Arsenal reached out to me. I’m very excited to get started. It’s been a while coming now so I’m looking forward to it.”

Arsenal Women head coach, Jonas Eidevall said: “Simone is an experienced defender who bring a strong attitude and mentality to the team on and off the pitch. I am sure that she will be a great fit to the squad and we are looking forward to working with her.”

Simone will wear the number 20 shirt.

Welcome to The Arsenal, Simone. All the best!

How can anyone of sane mind down vote a comment wishing a new player good fortune at the club you presumably support?
If you do not like women’s football that is fine simply don’t bother reading the women’s blog and even more so don’t bother leaving unjustified negativity behind you!

Its mad how this signing just seemed to come from nowhere, looks like 3 good signings this summer, Shame about the good player’s we’ve lost though

She was negotiating with United but once Jonas came to Arsenal, she came here instead. Was tipped off about this a few weeks ago… https://twitter.com/Stillberto/status/1410171593779781633?s=20

I think Frida Maanum is “out there” now but that’s all I know about atm.

At least we only lost a few! Some WSL teams have been hemorrhaging players. You have to wonder if they shall have a squad at all for the start of the season!
What if we could cajole that Zambian striker out of China that would really show intent?

I don’t thin Banda would need much cajoling, it would be her current club we’d have to convince/throw money at!

With doubts about the fitness of Jen & Viki, signing Simone seems like a good addition to the squad. She obviously wanted out from Bayern by terminating her contract there.
Let’s hope she is as successful here as her compatriots, Kat Veje and Janni Arnth. They signed and we won the WSL!!

Absolutely! Not seen Beats or Viki for a while so let’s hope the long lay off finds them back to full fitness.
No real idea who Simone is but she cannot be bad coming from Bayern and adding a quality option to our back line personnel can only be a good thing. It could also mean that Leah could take a couple of steps forward into midfield now and again to give Kim, Wally or Jordan a rest every so often.

Nice that Jonas Eidevall was a draw for the player.

Welcome to the Arsenal, Simone Boye!

No more playing our defensive midfielders into CBs, a much needed reinforcement. (credit to Walti though) i do hope to see Patten play more often next year.

This is exciting! Would love a more in-depth analysis of her as a player 🙂 which specific position(s) does she play in, what type of defender is she, etc.

Yes, very good news & would most welcome a detailed analysis

WSL fixtures published tomorrow, am expecting news of a WSL game at the Emirates when they are announced 🙂

Welcome to the club.
Am really liking the calibre of the new signings thus far.
And despite all the respect and love for Joe,
With the Jonas era building early steam,
am feeling really excited for the new season and seeing how the squad continues to develop.

I’m getting excited about the new season. Can’t wait to get back to Meadow Park (and also the Emirates, and hopefully some away grounds too). Does anyone know yet what the arrangements will be for Arsenal Women membership/season tickets?