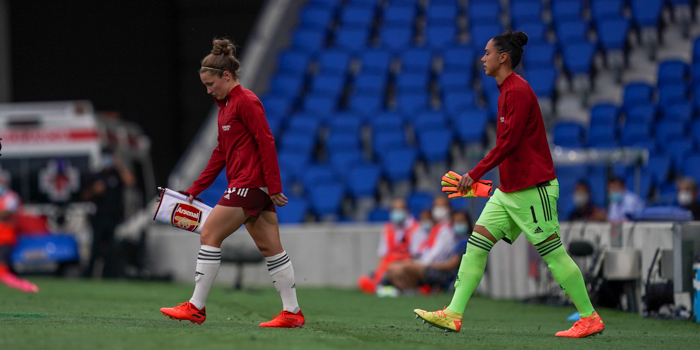 No Arsenal player has played more minutes this season than captain Kim Little. The captain represented Team GB at the Olympics this summer and has slotted straight back into the starting line-up.

Despite coach Jonas Eidevall’s insistence on rotating his players, Kim has been a mainstay, never rotated from the starting line-up and only withdrawn once a game is secure.

Jonas is hardly the first coach to regard Little’s qualities as indispensable. The 31 year-old took the decision to retire from international football this month to look after her body in her 30s.

After 15 years, Kim Little has brought her international career to a close.

It’s a decision that her coach Jonas Eidevall is fully supportive of, telling Arseblog News, “From a loading perspective with the point she is at in her career, it can be valuable for her. Like you said, the internationals are not ‘an international break’, it’s further loading for the players.

“It can be a really good decision by Kim to focus on club level.” I ask Jonas what it is about Little that all of her coaches find so valuable and difficult to replicate in other players.

“It is a lot of factors,” he ponders, “But as a coach you select players because of the qualities they can bring to the team and with Kim she is a great passer of the ball, she has great dynamics and movement in offence and defence.

“Then as a coach you look for consistency and Kim is so intelligent that she understands everything immediately, which makes you feel very assured as a coach to keep playing her. That probably explains why all of her coaches throughout her career keep picking her game after game, she guarantees a level of performance.”

I want to say she’s underrated, but I feel like everybody that knows womens football, knows about her. Even though she doesn’t get seen as much as the Rapinoes, Bronzes and Miedemas of the world, anybody with a little knowledge knows she’s one of the greatest. I think retiring is wise. She’s given everything for Schotland and for a long time she was one of few to carry it. Now they actually have a very talented team. More big players so I think she also felt like she could leave it and see what’s still possible with Arsenal if she… Read more »

So glad JE appreciates her.

Hope Solo’s opinion on Kim Little should be a great lesson to all coaches. Hope doesn’t praise players like that. Kim is like the diamond 💎 in everything you have. She’s Super Awesome 😍

Now that she has given up playing international football we are going to see more of her. She is the grit of the team

Kim Little is our perfect professional, a role model to young girls, fans and players alike. This is a footballer who was FA Player of the Year in 2010, PFA Player’s Player of the Year in 2013, U.S. Soccer League MVP in her debut season in 2014, and the BBC World Footballer of the Year in 2016. During her 3 years in the USA with Seattle Reign she consistently outshone the big names such as Megan Rapinoe, Carli Lloyd & Alex Morgan. Kim was the key component for Team GB in Tokyo & had she not been substituted late in… Read more »

I believe she’s the best women’s footballer ever. She’s played all over the world and has performed consistently excellent and with no fanfare – a true professional.