Arseblog News – the Arsenal news site
Home Staff Manager Arteta: We have a lot of trust in Martinelli 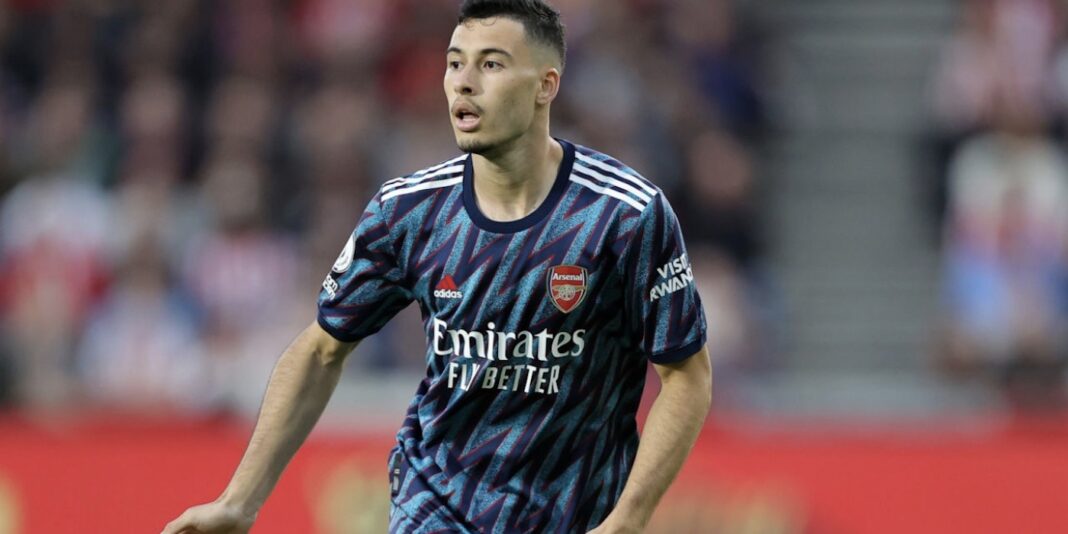 Mikel Arteta has dismissed the idea that Gabriel Martinelli could be loaned out in January, and insists that he has a lot of trust in the 20 year old.

The Brazilian hasn’t played a great deal this season, although he did start some games at the beginning of the campaign, leading to questions about his lack of involvement.

It was put to the Arsenal boss today, who made it more than clear that the exciting young forward is in his plans when asked why he wasn’t getting more game time.

“Well, it’s because of the amount of players we have in those positions first of all,” he said.

“Unfortunately he got injured last week, it’s a minor injury but we don’t know if he’s going to be available for Monday.

“But we have a lot of trust with Gabby, and we have to find the right space for him to grow within the squad.

“The injuries he has suffered have been big setbacks, we sometimes forget his age, what he’s done, and where he is.

“We need to try and help him maintain that balance right, because you know you can generate frustration that comes out, in my opinion, a not very realistic diagnosis and you need time to do that.”

It remains to be seen if Martinelli will be available for Monday evening’s visit of Crystal Palace, with Arteta revealing he’d picked up a small injury in training during the week, but when a loan move in January was posited, he ruled that out.

“No, I’m very happy with him,” he said. “We’re not looking at anything like that.”

To be fair to Arteta, Nketiah and Laca just shouldn’t still be at the club. We should have found a new home for them in the last 2 years.

Without them, Martinelli’s pathway is a lot less complicated. And the same applies to Balogun too. Not selling players is very detrimental to squad building and player development.

The Beast
Reply to  Johnny 4 Hats

I agree that Nketiah should’ve moved on over the summer, which the timing of his injury didn’t help with, but I’d be more than happy to see laca stay for the rest of his contract.

He seems to be a good influence on the younger players & we don’t really have anyone in the squad that can do what he does…..yet

He really needs a loan to find himself again. I feel like Norwich would be perfect for both he and the team. They play the right way and his energy is a great fit.

Does that mean he goes down with them? Last time I checked it didn’t. Isn’t the more important thing that he plays, AND with a team that tries to play the right way. Or would you rather he go to Burnley?

Even we’d get relegated if he was our only centre forward!

Or a team that win the odd game…

Maybe they would with Gabby… they need improvements in their forwards and they like active forwards. Tick, tick. Not like there is any issue if they get relegated, just as long as he gets games and experience (and bangs in 10+ goals in halfa season).

Makes me wanna question who do you want as laca replacement? Or none and give gametime to Gabi and balogun.
Also what do you think the club’s striker recruitment policy is going to be?
Because these lads are really promising. TJJ, biereth, moeller and Edwards as well.

I just think that CF is a very special position. If Arteta wants to use Patino, he could put him in a midfield with Partey and Xhaka. But CF is a lonely position. And if you don’t score in your first three or four, your career is already hanging by a thread. For me it’s all about loan deals for these youngsters. Harry Kane went on a bunch of them. It’s a good way to play with the pressure removed slightly. I would be looking for all the youth lads to get a solid championship loan move very soon. As… Read more »

Can’t say I agree about Laca. Totally different type of player from Martinelli.

Yeah but when Arteta is looking at his bench on the 70th minute and needs a goal, is he going to choose the £50m 30 yr old or the teenage Brazilian?

Depends on what type of player he needs for the situation. Laca’s build up/hold up might be better suited. He may not get the goal but could be involved in it.

I know I’ve seen Martinelli brought on instead of Laca, when chasing a game before

It’s still another player that Arteta could bring on instead. Odegaard is nothing like Pepe but his arrival has kept Pepe out of the team.

Arteta has always leant on experience and his older squad players. I find it hard to believe that Martinelli will get the same amount of minutes this season, regardless of two other players that could be used instead of him.

Happy that he’s not being loaned out BUT he has to get some game time otherwise we’re going to lose him!!

If he’d stop playing Nketiah at every opportunity and giving those minutes to people who are actually planning on staying beyond this season that would be a start. I think young Martinelli needs a few games to re-build his confidence, whether from the start or as an impact sub later on in games. I think we are suffering with the lack of European group stage games to give these guys the minutes they crave.

The Beast
Reply to  AlexNuggz

We’re definitely suffering from no mid-week games but Martinelli’s gotten way more minutes so far this season compared to Nketiah. I think Eddie’s only featured in 1 match so far?

If I was Martinelli I’d want to go out on loan in January. He’s at that crucial age where he needs lots of games to develop as a player. The odd cameo under Arteta won’t do.

I agree with Jonny up there: we’re keeping hold of too much unwanted dross. We need to dump them and then give Martinelli a chance instead. The Brazilian could become a real diamond if probably developed.

It is likely an unpopular opinion, but I think what Martinelli needs the most right now is good coaching as there are aspects of his game that need work. His injuries have slowed things down for him a bit, and a loan might feel a bit risky. If he can take his chances given this year, Arteta will know if he’s ready to compete for a starting spot next season – or go out on loan. In the interim, let’s be awfully happy he’s with us and growing with this team this season.

The Beast
Reply to  Futsboller

As much as I love him I agree.

Fact is we have better out on the wing as well up front atm. I would love if he worked on holding the ball up & his link up play so that we’ll have a natural successor to Laca but I think I see more of those qualities in Balogun atm

He’s played so little football in the last couple of years, he must be going backwards. If Arteta doesn’t plan on using hi. and shifting Lacazette and Nketiah, Martinalle would be better getting a loan.

There just aren’t enough games for fas or players. It feels like an age between each game this season and the Europa League looking like a good old friend now.

Xmas madness time is coming. We may well sell Laca and/or Eddie come Jan. FA and League cup are pretty much guaranteed starts for him.
Question marks over Pepe consistency could see him sneak in.

Plenty opportunities to see whatswhat. HOwever come Jan window his situation should be looked at in more detail.