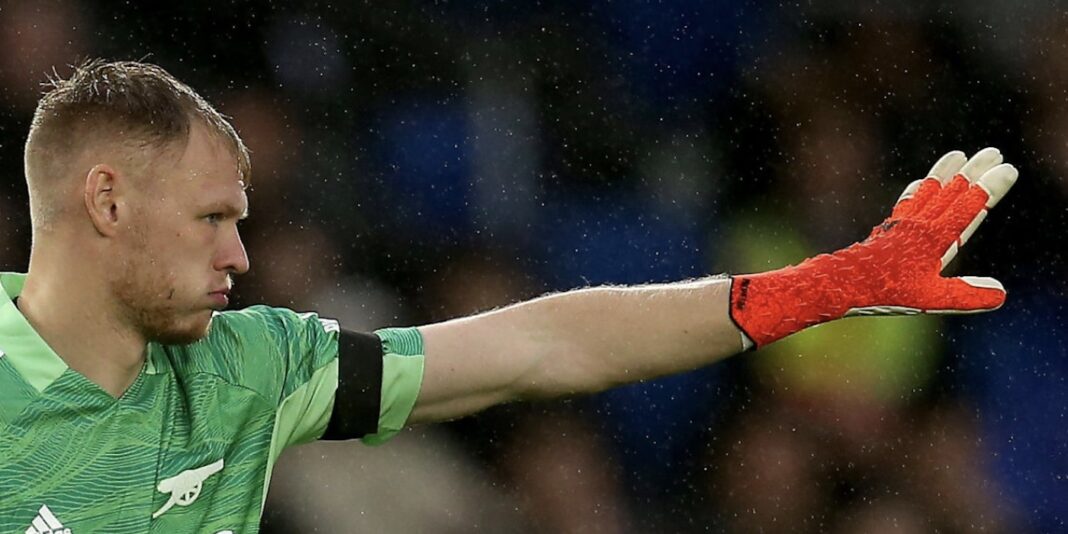 Having taken Bernd Leno’s position after the last Interlull, Aaron Ramsdale will be keen to build on that as we come back from another one, starting again on Monday night when we face Crystal Palace at the Emirates.

The summer signing’s ascension to top spot (for now), has come more quickly than most would have imagined, perhaps even the player himself, and in the short-term has impressed Arsenal fans and neutrals alike.

Given some of the scepticism which came with his transfer, it’s a positive thing, but in typical media form it was put to Mikel Arteta that the 23 year old was ‘born to be the Arsenal’ goalkeeper, leaving the manager to try and find the right balance in his reply.

“We tried to make a decision as a club to sign and bring in the right profile that we believe he had all the qualities needed to succeed at the club,” he said.

“It’s very early to make a judgement of how good he is, but the way that he’s settled and what he can transmit on and off the pitch I think is really important. He has engaged and he has adapted really well to the club.

“I think he’s getting a very good connection as well to our supporters and he’s performing well, which is the most important thing.”

Ramsdale also made the England squad, and the prospect of him taking over from Jordan Pickford was mooted. Again, Arteta tried to bring an element of realism to the situation, saying, “He needs to keep performing like he’s done and always try to think about what he’s doing right, and then continue to do those things, be humble and think about the things he can improve.

“Then, everything will come naturally, as has already happened very early on with him, to be a goalkeeper with his age and his career. He deserves that because of how he’s handled every step along the way.

“Some of them have been difficult moments and disappointments, which are important as well to evolve in your career.”

He kept three clean sheets in his four Premier League games so far, and fingers crossed he can add to that tally on Monday against Patrick Vieira’s Palace.

The most exciting thing about the last few months has been that we didn’t waste time with the tried and tested old excuse “they’ll need time to adjust” with our new signings and “we need our experienced leaders”. We have seen enough of many of the old hands at this club currently (or recently departed) and we’ve been heading in the wrong direction. The fact that these guys are being given chances immediately: a fresh start with a young team that can build together and that seem to have the right characters, is what is really enticing about the current… Read more »

Is this an endorsement for Arteta?

I still can’t get over how fast ramsdale has disproved our initial assertions of him. He’s on the fasttrack to being a fan favorite alongside tomi

My only doubt with ramsdale was that 26m quid (or whatever it was) was too much for a backup, so I hoped that if we did sign him it was as a first choice. Tbh, I didn’t know much at all about him except he lead the league in saves in back to back years as a relegated GK. When it became clear he was coming I watched a great scouting video (someone shared it on one of these posts) by an employed football analyst and it showed his strengths and improvement areas really well. His weaknesses were all improveable… Read more »

Agree except the word “Our”. I think a fair few fans, including myself, knew he was a good keeper.

Reiss Neverseen vs the DicTeta
Reply to  Hakuna Matata

He’s been relegated before (3 times I gather) and it was looking bad for us after three games.

I predict we won’t be relegated this season adn that is partly down to how well he’s started off.

“We’re getting relegated” overreaction merchants… the aftv generation of fans.

The Beast
Reply to  StockholmGooner

Odd isn’t it? Almost like they’ve never watched an entire season of football.

I thought the fee we paid for him was too much but he convinced me with his debut 90 minutes against WBA in the Haribo Maoam Trophy. The way he threw a nutty at the defence when we conceded a chance against the Spuds just cemented my belief that he will be very good for us in the long run.

Well next summer will be our third consecutive season where we will buy a reserve keeper 😂
Tho would love a home one come thru, get a couple out on loan this winter in preparation