THE LOWDOWN
Arsenal play at home to Brighton & Hove Albion in the WSL on Thursday night in a rearranged fixture due to take place just before Christmas before being called off due to covid cases and injuries in the Brighton squad. The Gunners arrested their recent rot with a 1-1 draw at Manchester City on Sunday thanks to a stoppage time equaliser from Tobin Heath.

With Chelsea drawing away at Brighton earlier in the day, it kept their gap to Chelsea at the top of the table to four points, though Chelsea do have a game in hand. However, the Chelsea result contained a warning for Arsenal too with Hope Powell’s resolute Seagulls side now ready to repeat their Chelsea shutdown at Meadow Park.

In their most recent home game, Arsenal struggled to break down a resolute Manchester United defence and despite a good performance at City on Sunday, only produced an XG of 0.6. Creating opportunities has been an issue for the team in recent weeks and Hope Powell’s team will test that once again with a compact 4411 formation.

Having the likes of Leah Williamson and Tobin Heath back in the side, as well as Lia Wälti ought to help with that, while Lotte Wubben-Moy and Rafaelle also offer athletic options in defence that can help the team push up the pitch a little more. Jonas Eidevall’s side follow this game with an FA Cup tie against London City Lionesses on Sunday where they will probably take the opportunity to rotate the team.

TEAM NEWS
Katie McCabe serves a one-match suspension after picking up her fifth yellow card of the season against Manchester City. Rafaelle can play at left-back, another option is to move Noelle Maritz to left-back and play Laura Wienroither at right-back in McCabe’s absence with Steph Catley still away at the Asia Cup.

Caitlin Foord and Lydia Williams are also away with Australia at the Asia Cup, while Mana Iwabuchi is at the same tournament with Japan. Leah Williamson is also fit to play after coming off at half-time in the City game with fatigue. Malin Gut (ACL) is out.

A WORD FROM THE BOSS
“I expect Brighton to work very, very hard. We know that from when we played them in the FA Cup and they defend with a lot of players and sacrifice themselves a lot in the defensive third. They are organised, they try to hit you on the counter-attack, they are strong on setpieces and a good crossing team. It’s about controlling their threats. They get good numbers into the box when they cross the ball and it’s about limiting those moments and defending them when they happen.”

LAST TIME OUT
The teams met in the FA Cup semi-final at Meadow Park in October and Arsenal ran out 3-0 winners with goals from Kim Little, Beth Mead and Leah Williamson. In the corresponding WSL fixture last season, Arsenal were 2-0 victors at Meadow Park in April thanks to a Jordan Nobbs brace.

THE OPPOSITION
The Seagulls haven’t won or scored a goal in seven games, dating back to their 1-0 win over Leicester City in November. However, they did manage to grind out a 0-0 draw against Chelsea on Sunday, it was their first draw in the WSL in 23 games, a run going back an entire calendar year. Brighton have developed very well since being promoted to the top flight in 2018.

They are not a comfortable midtable side and it shows in their results. Hope Powell’s side tend to play a mid-block 442 and, frankly, it either really works or else it doesn’t! Their form is the epitome of midtable patchiness. Just look at their blocks of results since last December in the league.

They back up bad runs with good runs and vice versa. They are in a bad run at the moment but, as we have seen many times before, a losing run like this is usually punctuated by a short winning run. Arsenal will have to make sure that they don’t get out of another rut and into another groove at Meadow Park on Thursday evening.

“We came together on Sunday as a team and we can do it again on Thursday, so bring it on." 👊💬 #BHAFC

PLAYER TO WATCH
Tobin Heath came off the bench to grab a precious stoppage time equaliser at Manchester City on Sunday. It was her second substitute appearance following her return from a calf injury and I fancy she may well start this match. Beth Mead has started 12 of Arsenal’s last 13 fixtures and is surely due a rest, even with the London City Lionesses match in view on Sunday. 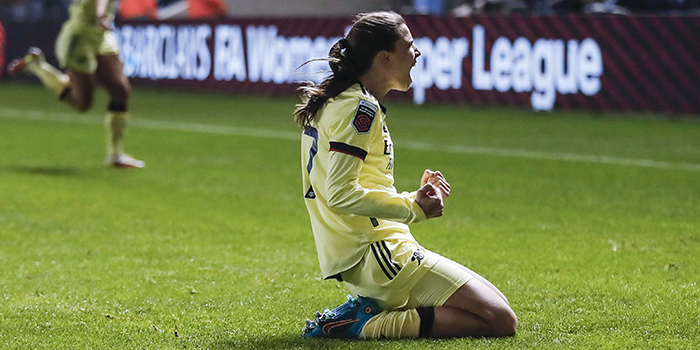 Heath’s contribution against City was the intervention of a world class player. In a white-hot moment in the 92nd minute, she stayed calm to slot the ball into the bottom corner when even a good player might have desperately thrashed the ball towards goal. Heath’s ability to play in small spaces and attract opponents with her dribbling have been much missed on the left-hand side.

Arsenal are also missing Katie McCabe and Steph Catley, which means they will play with an unfamiliar left-back of sorts, so having Tobin Heath on that left flank will be an even more attractive option. Heath is a world-class player and it feels like that has been lost somehow in her unexpected signing followed by her injury. She hasn’t truly felt like *our* player yet but Sunday will have gone some way to changing that and I think she will be a big player in the second half of the season if she stays fit. 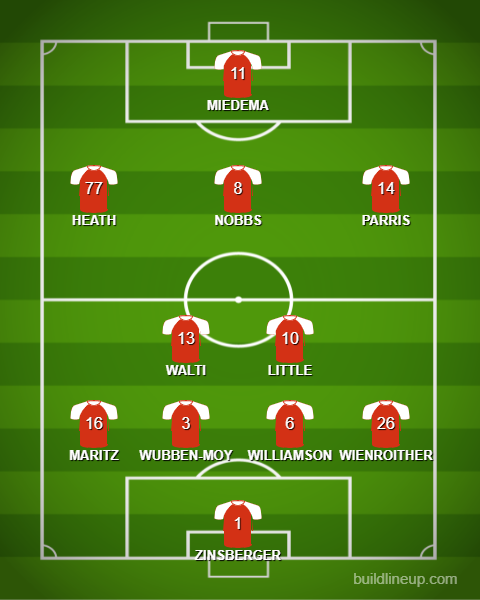 HOW TO CATCH THE GAME
The match takes place at Boreham Wood’s Meadow Park on Thursday at 7.30pm. Tickets are available on the gate for £12 adults and £6 concessions, or else you can buy them from here in advance at the cheaper prices of £8 adults and £4 concessions, so long as you buy them before 2359 on Wednesday. The game is being screened live by Sky Sports in the UK.

COMING UP
We will have the usual match reaction from Jonas Eidevall on the site on Thursday evening as well as the usual reaction video. The mailbag edition of the Arsenal Women Arsecast will be out next week.

Tobin was sensational for the short time she was on the pitch – world class indeed, with 2 World Cup Winner’s Medals to prove it. She could make a huge difference during the next couple of months. Absolutely fab to see Leah return, seemingly in full flow from the start. Mead for sure needs a wee rest though there was the winter break recently, whilst Nikita Parris has sadly not been an effective signing. Stina looks dynamic & powerful & may contribute a lot to the cause; definitely like Laura & Rafaelle from their first appearances too. Jordan was looking… Read more »

Arsenal play in Greater London, and Brighton play in East Sussex. So why have you written one of the Sub-headings in Welsh? 😀 🙂

Took me a minute…