The Austrian has played in both full-back positions, at centre-half and in defensive midfield but the Arsenal boss says he will use her primarily as a right-back.

“I see her primarily as a right full-back. We followed her closely during the autumn, I saw her in the Champions League qualifiers against my former club Rosengard and she was very good in those games.

“I obviously saw her play against us and I saw her play for Austria against England up against Lauren Hemp and what stands out for me are her defensive qualities.

“She is very, very solid and mature in her decision making. I really think we can improve her attacking game in our environment to develop her even further.”

Jonas explained that he sees the signing as a positive for Swiss right-back Maritz, who was understudied by centre-half Anna Patten in the first half of the season. 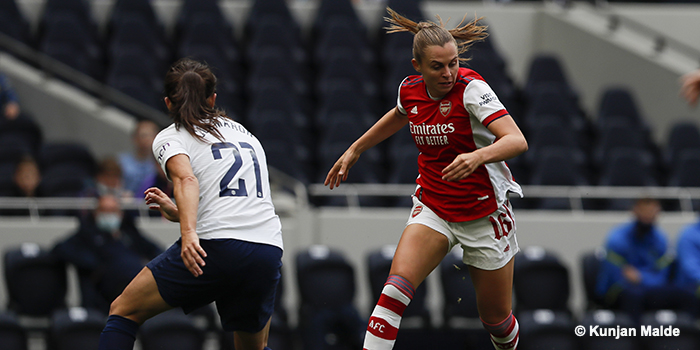 “I think it had been a limiting factor for us in the autumn that we had one natural right-back. We have lots of players that can play there but they play it a little bit different.

“I think that also didn’t bring out the best in Noelle Maritz because she had to pace herself during the tight schedule. So hopefully we can push her harder now and push harder in every position and that we understand that if you are tired, someone else can come in and play and do the same job. That was very much needed for us.”

When Noelle first arrived I noted how she could bomb up the touchline and yet have a feistiness akin to DvD. For some reason these qualities have been tempered of late which has been detrimental to the team performance. Perhaps now with back-up we can see the “old” Noelle back again as well as looking forward to see what Laura can do.

It does not help her attacking that when she does an overlap, Mead / Parris dribble it to the center most of the time. I think she has a nice cross and Mead / Parris should use her more…for the crosses and potential cut backs to themselves.

100% agree about her crossing, she hit a couple of lovely ones against Brighton in the Cup game so it’s definitely a strong option in attack.

Essentially the women’s team do much as the men’s team (and lots of other teams do) in fairness, they ’tilt’ the pitch and have a left sided bias, so one full-back really bombs on like another winger and the other sits in like a third centre-half. In many games, Arsenal don’t really need that and could easily cope with both FBs bombing on. When Noelle played as a LWB at Wolfsburg, her crossing and chance creation numbers were in the top three for FBs in Germany.

I like the thought of both Catley/McCabe and Maritz bombing on in certain games, the more layers to the attack the better :).

If Jonas really wants the perfect RB for his style, get Ellie Carpenter from Lyon. Pay as much as we can.

Simples! Why not get half the Barcelona team too?