Arsenal 2-1 Wolves: By the numbers

This was an interesting match to experience. I was able to watch the first 15 or so minutes live and then the last 15 minutes live, with the time in between with the game in the background and occasional glances at Twitter while trying to focus in meetings. Maybe because when I went back and watched things I knew what happened but my general opinion of this match did not match the consensus of things I saw on Twitter. I think it really shows how much the emotion of the moment can drive things.

Also, those last 15 minutes were incredible.

I almost felt like I was cheating to enjoy the pure ecstasy of that winner because I didn’t have the same amount of suffering from 70+ minutes that came before it.

Arsenal 2-1 Wolves: By the graphics 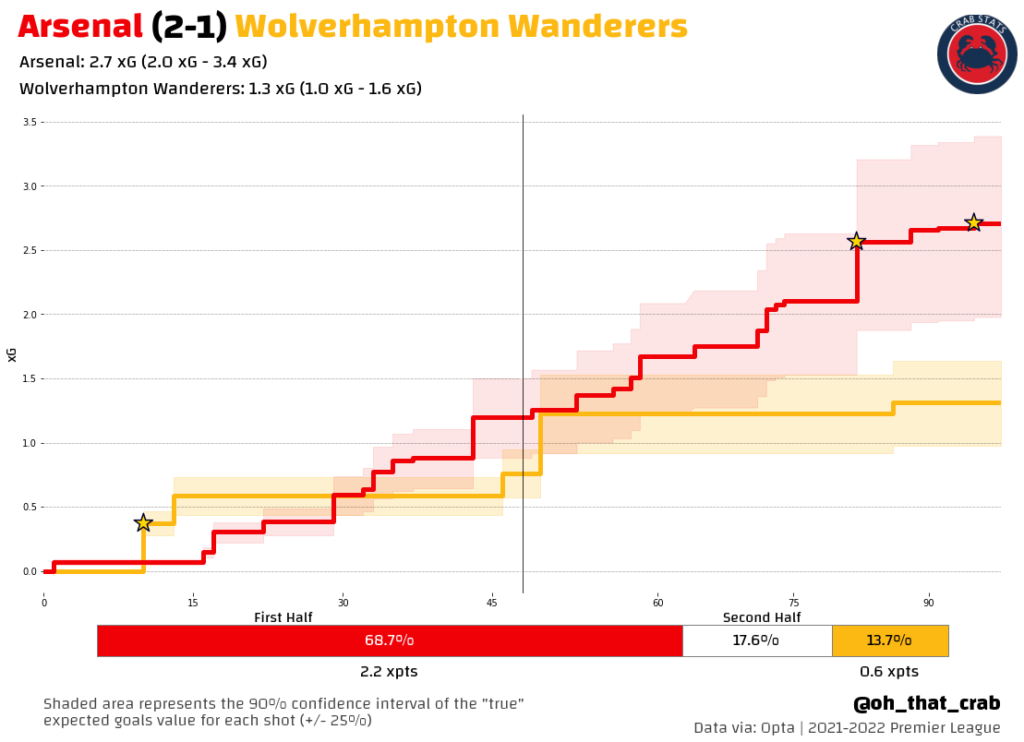 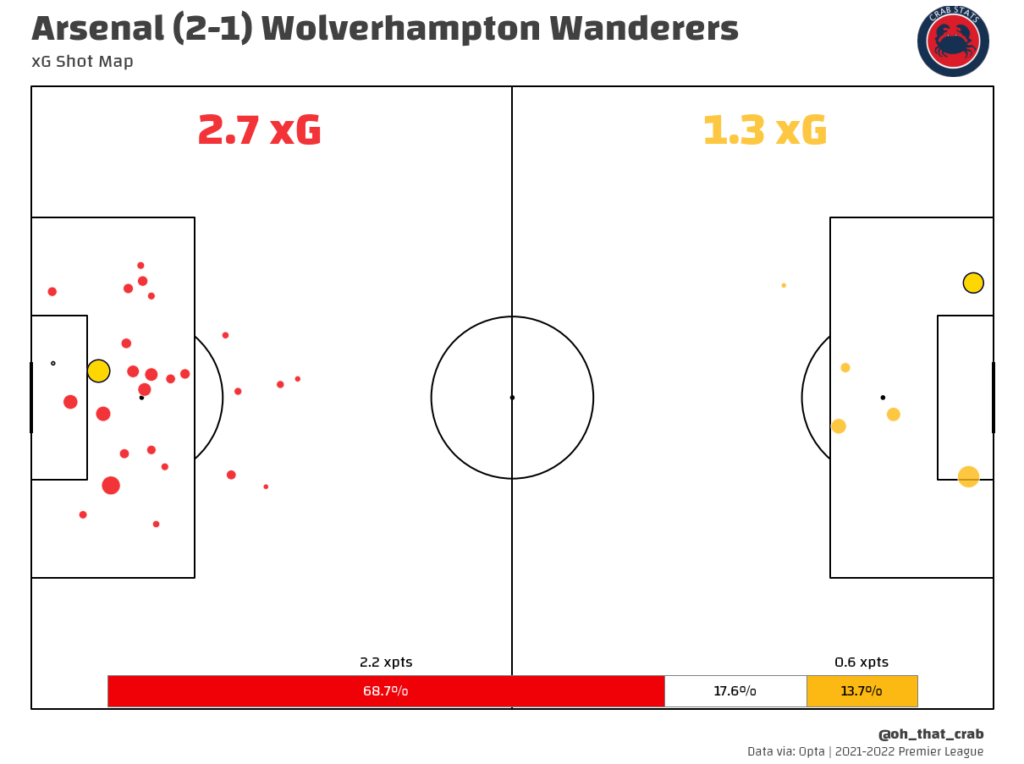 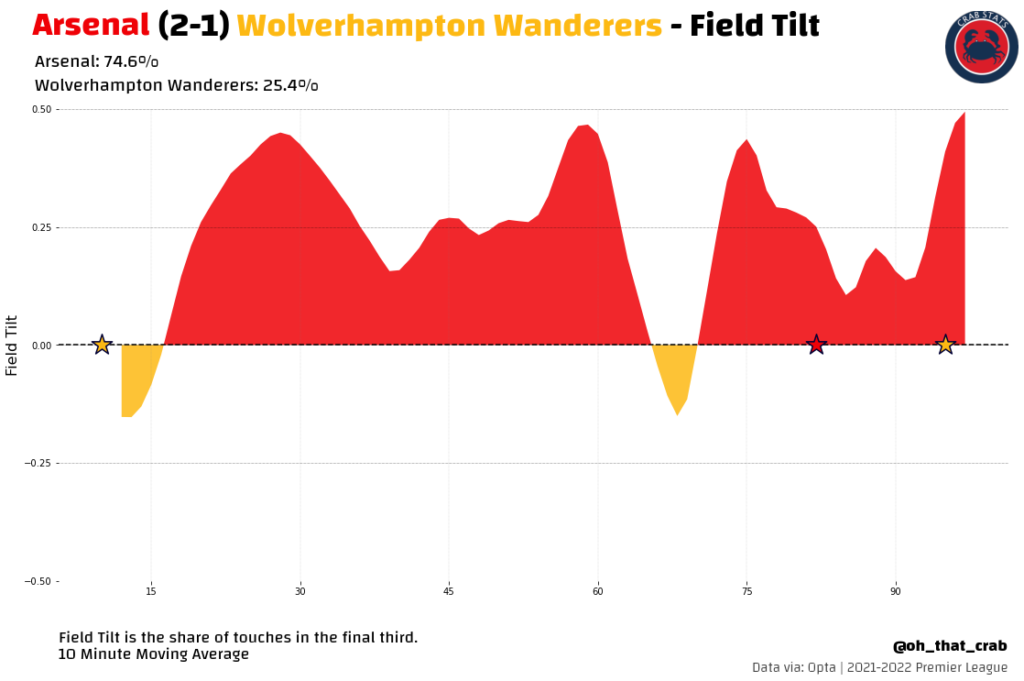 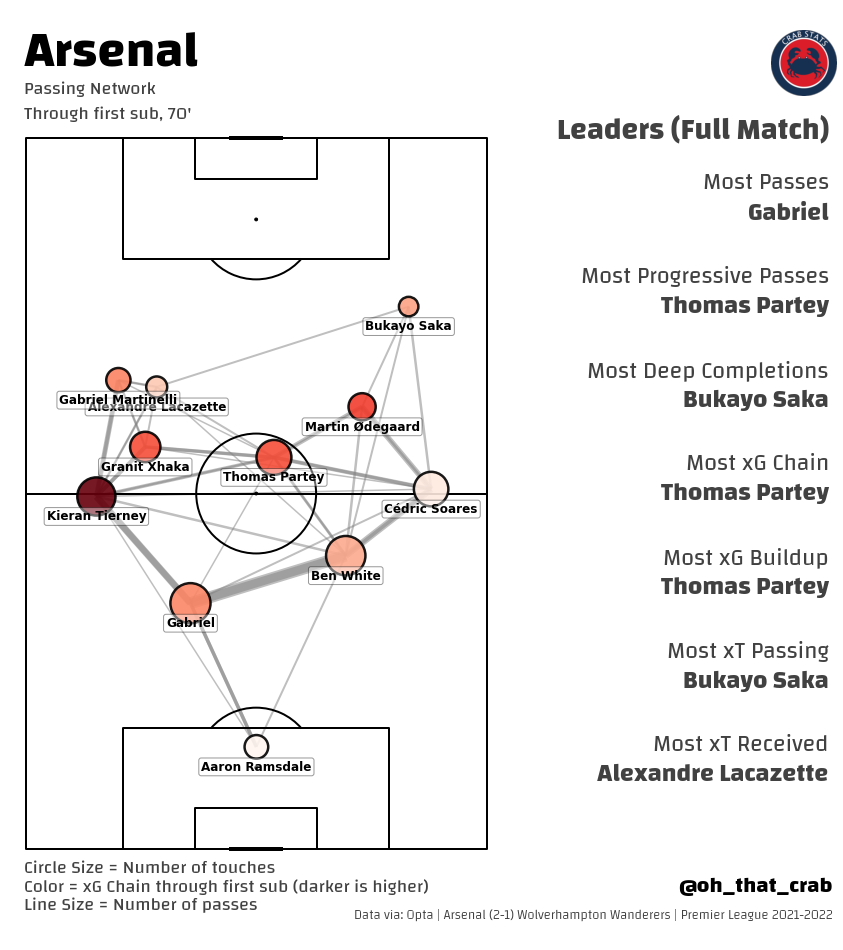 Arsenal 2-1 Wolves: By the numbers

26 – Shots from Arsenal in this match, the 2nd most they have had in a match this season.

8 – Shots by Alexandre Lacazette, leading all players. His 8 shots in one game was tied for fourth most in the Premier League this season. His 6 open play shots is tied for 14th most in a single match.

2.7 – Expected Goals (StatsBomb version), the third-highest total have had this season. This was also the second most Wolves have allowed a team to produce against them this season. 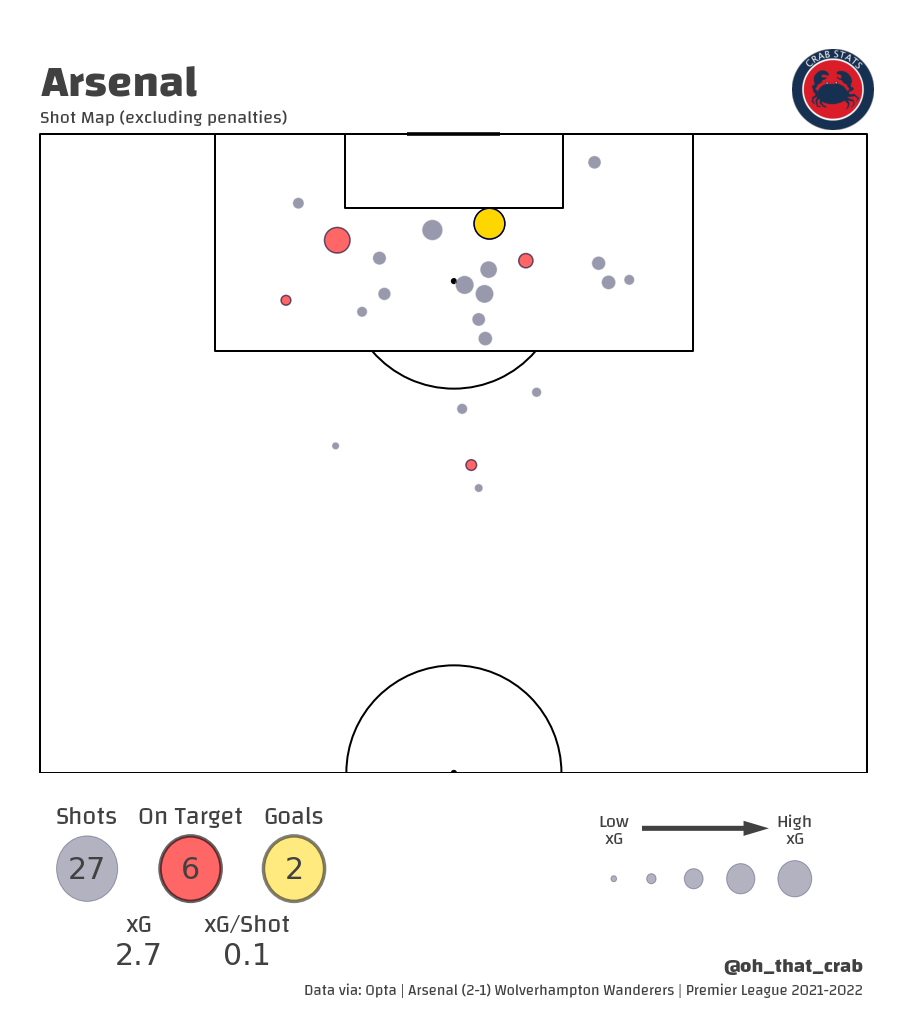 6 – Times this season that Arsenal have had 2.5 or more expected goals (xG) in a match this season, last year they only had 3.

51 – Touches in the box by Arsenal, the second most they have had in a match this season.

20 – Open play passes completed into the penalty area by Arsenal, the most they have had in a match this season. 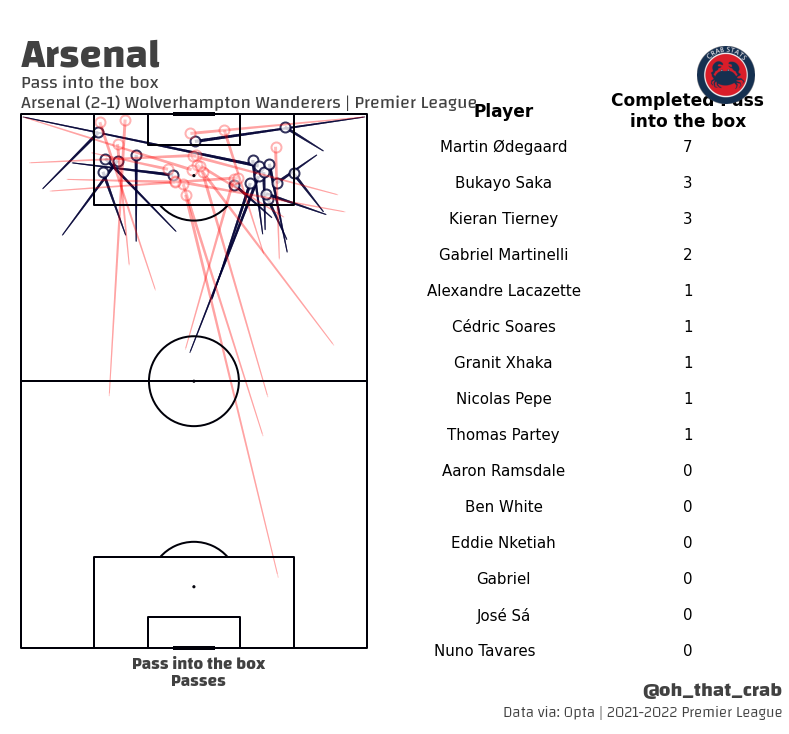 53 – Final third pressures by Arsenal in this match, the fifth most they have had in a match this season.

8 – Final third pressures each from Martinelli, Lacazette, and Odegaard

55 – Regular Play Long passes from their own half by Wolves, of which only 19 were completed.

One of the big takeaways from this match is that Arsenal look pretty good at applying constant pressure against a deep defensive block. A lot of this was due to Wolves getting a goal in the opening 10 minutes but it was also the likely strategy of Wolves with the goal coming as a bonus. The average positions of the two teams really show the difference in where this match was played, this also probably undercounts things a bit with Wolves dropping even deeper (or being pushed back with Arsenal pressure depending on how you want to look at it) as the match went on. 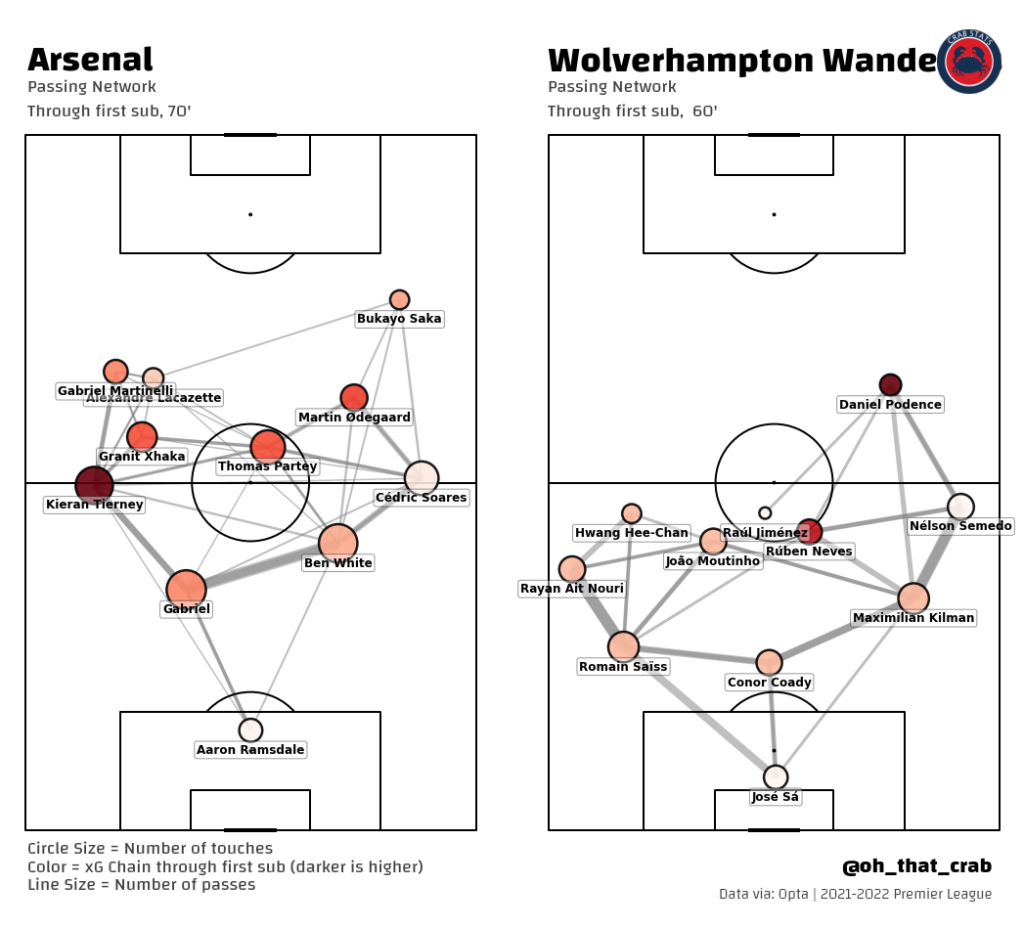 The team did this both through their possession but also the ability to force Wolves into turnovers when they did gain possession. The defensive actions map from Arsenal (this doesn’t include pressure events) show how high Arsenal engaged against Wolves. 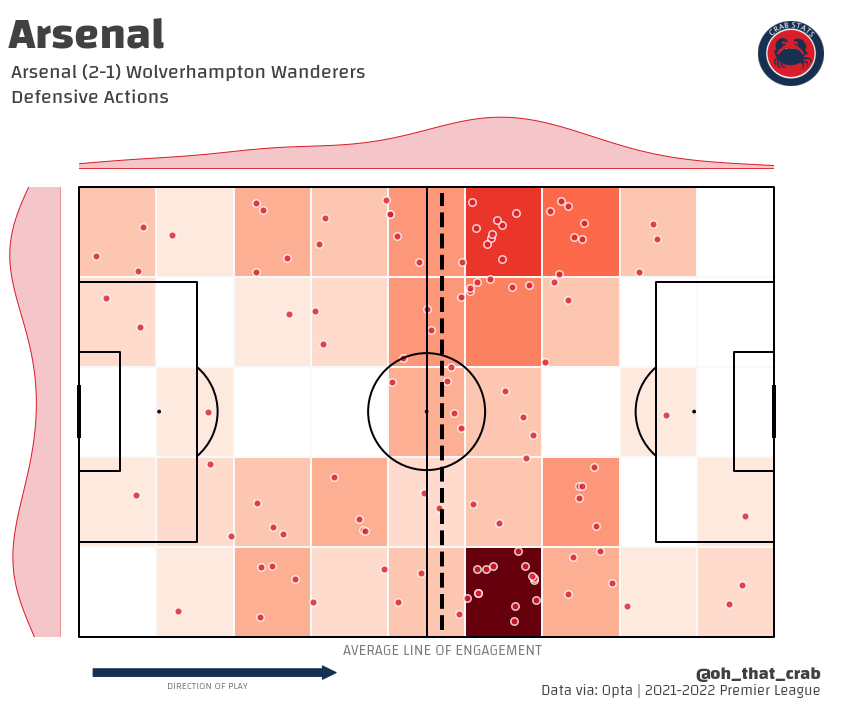 7 – Open play passes completed in the box, led all players 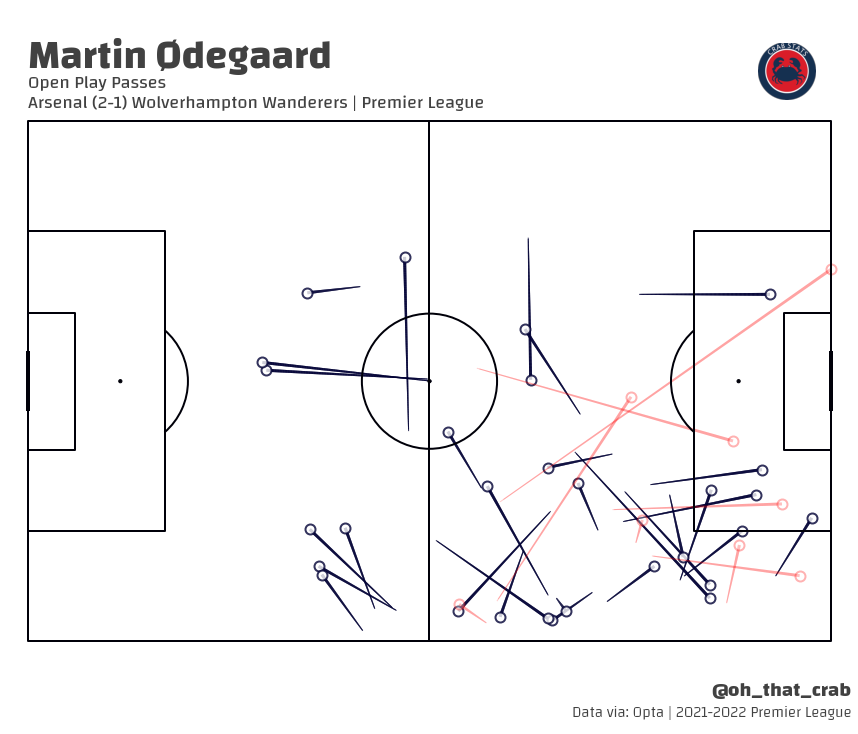 I was incredibly excited to have Martin Odegaard come back to Arsenal this summer. It took him a little while to get back into the swing of things but his influence on the team has grown. In this match he was a key part of Arsenal’s ability to apply pressure to Wolves.

58% – The average probability that Arsenal finish in the Champions League spots between the betting odds (50%), FiveThirtyEight (61%), and my own model (64%).

12% – The probability of finishing 3rd given to Arsenal by FiveThirtyEight

76% – Chance of a St. Totterinham’s day this season

One of the other things that is of relevance is that the games that Arsenal have in hand (or will have in hand after this weekend) are tough. Arsenal will have matches away to Sp*rs and Chelsea, and home to Liverpool. So yes, the games in hand for Arsenal are not easy (are there easy matches in the Premier League anymore tho?) but the schedule outside of that is actually not too bad. Arsenal have the 9th hardest remaining schedule (including the games to be played), our rivals for top 4 have the following: Manchester United 4th, Sp*rs 13th, West Ham 2nd, and Wolves 12th.

The head to head matches between the teams are still likely going to end up being the deciding factor but Arsenal are currently in the best spot.

Previous article‘We need to use her better as a team’ Eidevall backs Nikita Parris
Next articleTierney: I’m so happy for Laca

Arteta: We built the team we could...

Great win.
Maybe just me, but I was quite impressed with Daniel Podence both times we played them. They are a strong team

i also noticed he has a good touch and good vision awareness, but he didn’t translate that into any real dangerous plays. then again, them playing inside their own box probably didn’t help him much.

Off topic .. But something I just read. Apparently, Nicolas Pepe messaged Arteta in the early hours of Thursday morning confirming he wanted to be part of the squad against Wolves, despite the birth of his son less than 24 hours before kick-off.

You are right. He is their chaos-factor. He put teammates in good positions often. Felt before the match if his play were minimized we’d likely win. He was active– but we managed!

He’s a lovely player, isn’t he?

I thought he was better in the first game, not so much lastnight.

I was also quite impressed with Hwang and relieved to see him go off at 75 minutes.

Will be interesting to see if we enquire about Neves again this summer.

Arsenal are not a team that have rewarded my hope /optimism in recent years, but of course I’ll never learn!!
In this moment I feel good.
I did also look ahead. As you say head to head may be crucial, and all games are hard. But Man U and W Ham have tough fixtures. Spuds looks better in paper but at present it seems that they can only win the hard games. Hopefully their malaise against ‘smaller’ (I know, I know, what’s smaller than Tottenham??) opposition will continue

What’s smaller than them?
A: Ickle shit

Looking good and no cup matches to divert us. Wolves have won v Man U, Spurs recently but lost twice to us.

Decent odds of getting in the top 4. Hope we do it!

If we collect 6 points against Watford and Foxes then there would be telling pressure on the likes of United. I am loving it and would want us to beat Chelsea to stake claim for third and not settle for 4th.

Yeah, they don’t score many but concede so few goals, they gave good midfielders and some tricky wide players. They’re a side who will finish top 8 so we should be pleased to get the double.

The team press is really coming along. It’s crazy how his team turned from zeros to heros on the press. As you highlight Scott we were excellent pressing against their deep block. I love this new aspect of our game. Been calling on it for the last few years, glad Arteta has made it a priority over the last 3 months or so. It is such a difference maker in modern football. Not doing it just hands the opposition a free pass into your half and takes away those high turn over opportunities that rank incredibly high on xG chances

With 14 games left, I suspect we’ll need a minimum of 7 wins, 4 draws, 3 defeats – which would finish us on 70 points. Just got a nagging feeling Man United will go on a run and finish strong. The postponements of the Chelsea and Liverpool games this month could be a blessing in disguise. It’s enabled us to string 3 wins on the bounce with Watford to come next. I’m quite content to push the Chelsea fixture out as far as possible. Looks like they won’t have a gap in their calendar until April 20th at the earliest.… Read more »

So much good stuff here to savor from that win. Thanks for the incredibly thorough work, Scott!

You have clearly missed the stats on referee Atkinson’s errors. Potential spendings off for last man challenges. Deflections missed for corners. Elbows to faces.

Hi, Scott. Thanks for all you do. Is it possible though that you would provide a statistical look at Pepe’s game in relation to our other wingers? There’s been a lot accusation on just how wasteful he is, and I don’t understand that when he’s more efficient at dribbling, creating and finishing than the others? I think much of what we carry on as opinions on players are not statistically backed, and we just carry it on because it’s been said a lot by others. I really think Pepe should be starting in this team. Arteta has his reasons and… Read more »

Thanks Scott was really looking forward to seeing this and the xG in particular given their fewer but seemingly very good chances to score vs us peppering their goal and getting most shots blocked. Impressive performance all round. One thing I loved was that a goal down, there was a little “standard” u-shaped passing in defence as they sat back and pressured from the half way line, but a number of times we played longer lofted balls over their defence and caught them out. Satisfying as it shows understanding between players to make runs and see them, and kept pressure… Read more »