It was another good weekend for the Arsenal Football Club.

Arsenal convincingly beat a decent (but really bad at defending) Leicester team ensuring them that they would spend another week in the top 4. We also got to laugh at Spurs, who lost a (pretty much) must-win match against Manchester United, even if it came at the great cost of seeing Ronaldo happy.

Really tho, the best part was watching Arsenal. This team is playing some excellent stuff right now and I am sort of excited to see how they measure up against arguably the best team in the world (maybe second) in Liverpool on Wednesday. 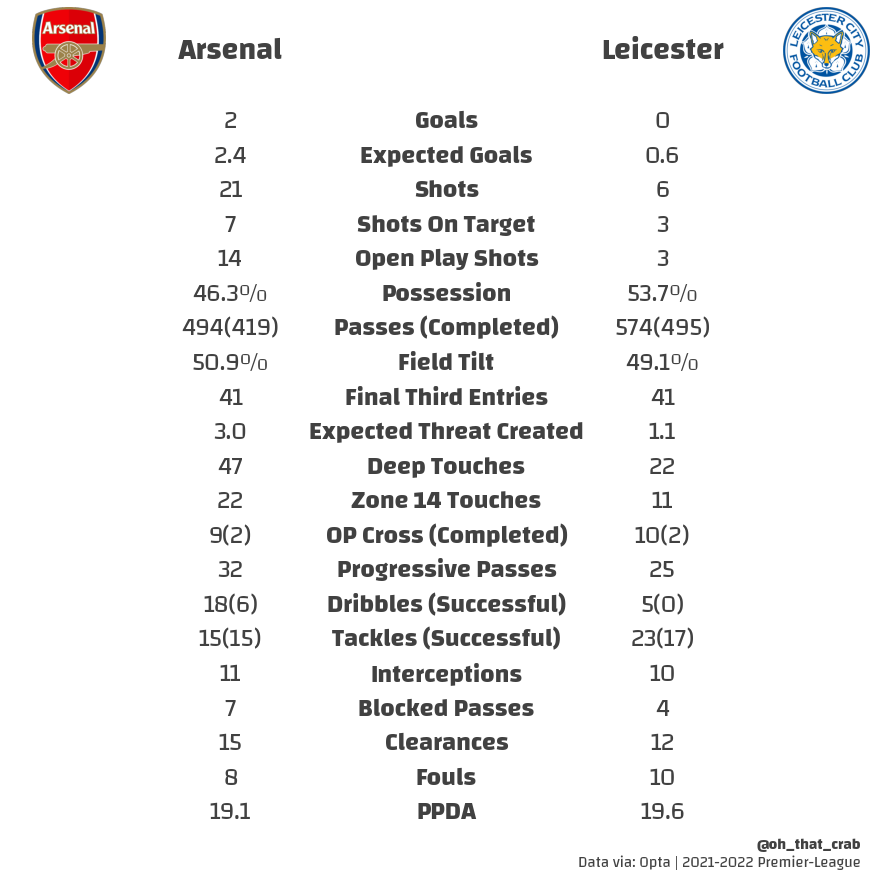 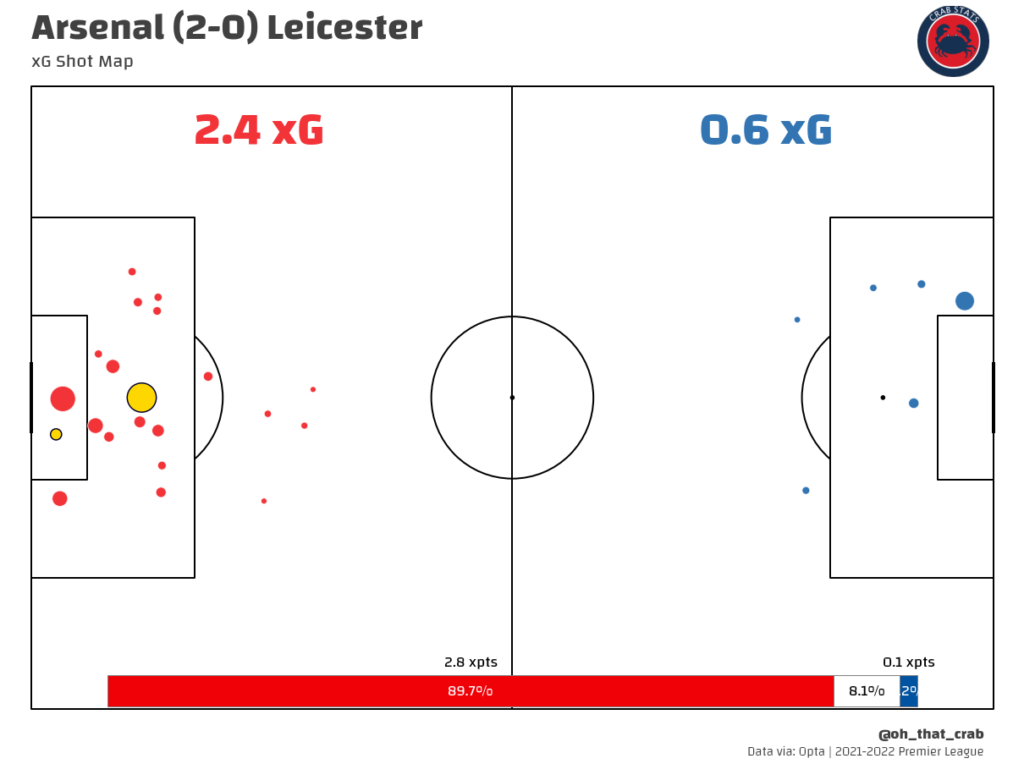 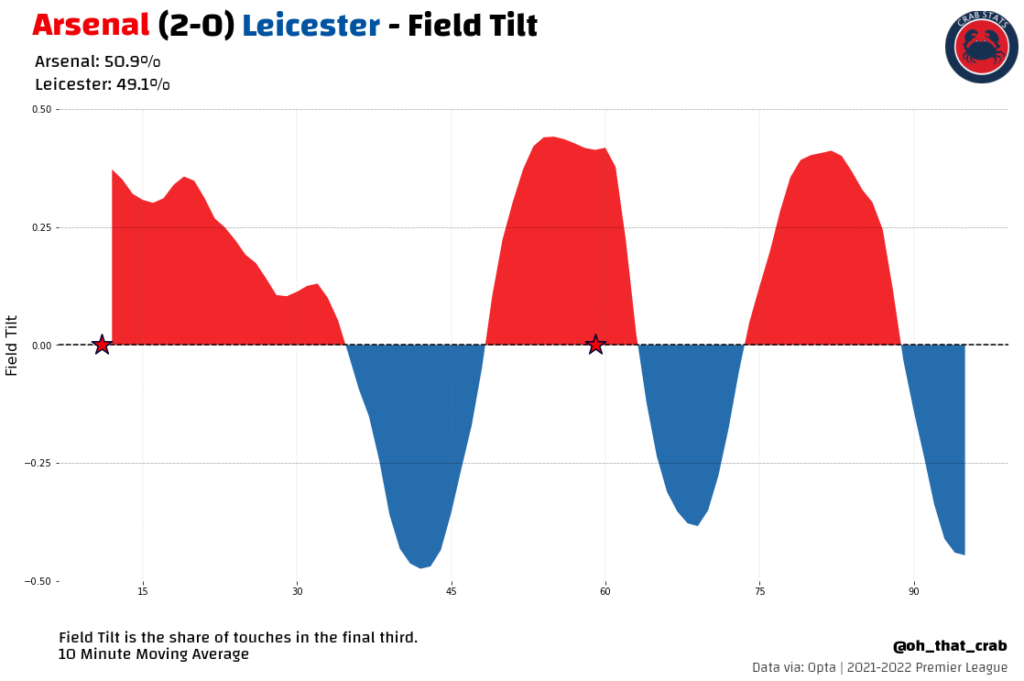 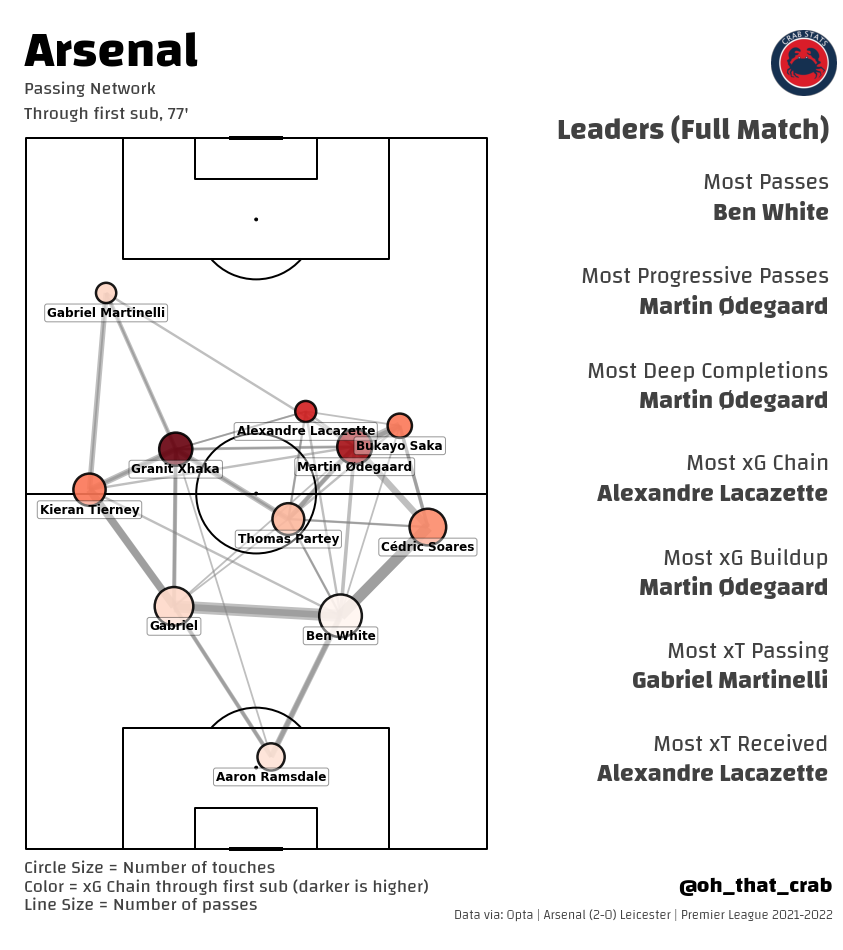 21 – Shots for Arsenal, the 10th time this season so far that Arsenal have equaled or surpassed 20 shots.

I feel like I post something like this every week but the improvement in the attack from last season is still something that I love to bring up.

5 – Shots by Bukayo Saka in this match.

39 – Shots by Saka going back to the Southampton match (when Arsenal roughly switched to the more 4-3-3 shape). That is 3.8 shots per 90 minutes.

24 – Final third entry passes by Arsenal in this match

5 – Players on Arsenal that had at least 3 final third entry passes (Odegaard led the team with 7). Another thing that has become more evident with the change in shape is that the responsibility for getting the ball up the field has become more shared, rather than dependent on Granit Xhaka. I think this has helped with balance and made the team harder to stifle at getting the ball up the field.

28% – Arsenal’s possession from the 30th minute to halftime.

3 – Defensive actions by Arsenal in the Leicester half from the 30th minute to halftime.

100% – Leciester’s passing percentage for passes that started in their own half from the 30th minute to halftime.

After the goal, Arsenal conceded possession, especially in the last 15 minutes of the first half. At times it reminded me a bit of the times when the team would get a lead and then drop way too deep. Thankfully Arsenal were able to survive the pressure that Leicester put them under and then came out in the second half to re-assert control on the match.

We even got see Arsenal do some of the “300,000 passes” type possession to close the match out with Arsenal having 9 sequences of 7 or more passes completed in the final 23 minutes of the match.

46 – Completed passes for Ødegaard, Maddison had 49.

256 – Yards of progressive distance passing for Ødegaard, Maddison had 203

7 – Progressive passes for Ødegaard, Maddison had 5

5 – Key passes for Ødegaard, Maddison had 2

21 – Final third plus middle third pressures for Ødegaard, Maddison had 20

1 – Dribble for Ødegaard, Maddison had 0

Some of this might be a bit unfair, but this was a match that it is easy to make comparisons because in the summer there was a lot of debate on which player Arsenal should chase. I don’t think Maddison would have been a bad choice for Arsenal but seeing what Ødegaard has been able to do (and with a transfer fee that is reportedly about half of what Leicester were asking) I think Arsenal made the right choice.

Ødegaard has become a pivotal part of this Arsenal team and I can’t imagine what this time would look without him in it.

127 – Corner kicks taken by Arsenal this season, 8th most in the Premier League

66 – Shots from corner kicks for Arsenal this season, tied for 6th most in the Premier League.

8 – Goals from corner kicks by Arsenal this season, tied for 4th most in the Premier League.

6.7 – Expected goals from corner kicks by Arsenal this season, 7th most in the Premier League.

92 – Corner kicks conceded by Arsenal this season, 3rd fewest in the Premier League.

43 – Shots from corner kicks allowed by Arsenal this season, 4th fewest in the Premier League.

0 – Goals allowed from corner kicks by Arsenal this season, the fewest in the Premier League.

2.8 – Expected goals allowed from corner kicks by Arsenal this season, 3rd fewest in the Premier League.

It might seem like a long time ago now, but one of the worries in Pre-season was how Arsenal would do defending corner kicks. In those early matches, the team did not do well, they added Ben White who isn’t known for his aerial ability and the questions only got louder. Well, I think we can say that they have now been answered.

Arsenal’s defending of corner kicks has been exceptional this season. They might be a little fortunate to have not conceded a goal, but their rank among the best at defending is well earned. The team has done well to limit the opportunities to take corners allowing just 3.4 corners per match (3rd fewest) and have been roughly average at limiting shots from corners with just under 5 shots allowed for every 10 corners (0.47 shots per corner). Where they have done really well is limiting the quality of the shots that they have allowed, they have the 4th lowest average xG per corner in the Premier League at just 3%.

On the attacking front things are almost the complete opposite. Arsenal generates a shot on 52% of the corners that they create (6th most) while creating slightly more opportunities than most with 4.7 corners per match (9th). Interestingly Arsenal haven’t really created especially good chances ranking 9th in xG per corner (5.7%) but have finished the chances that they have created.

Overall this is an area that has really improved for Arsenal and has had a direct impact on the points Arsenal have earned this season.

Previous articleOdegaard: It’s really fun to play with this team
Next articleBrighton Women 0 Arsenal 3 Analysis: Arsenal pull Brighton’s press all out of shape

Arteta: We built the team we could...

Thanks for another great article. Did i hear a commentator say we haven’t conceded from one hundred and something corners? Do you know the stat, going back into last season presumably?

They said 119 if I recall well

We should just give opponents corners on purpose then. So they can’t park the bus.

I make bold to say that this is the last season Arsenal will be in a top 4 battle for years to come.
With the obvious improvement this year, I expect the team to move a notch or two forward with the signings and organic growth.
That should install us as a bona-fide top 4 team – and an outside chance for the Title in two seasons.

I hope you’re right. Other teams (especially ManU, Sp*rs, and eventually Newcastle) will not stand still so it will not be easy, but we certainly have the potential to take this team to the next level.

Number one – in the league over the last 11 matches!

Tougher times to come but hope we can keep the performances and form going and even the results. Big test on Wednesday (expectations low but let’s hope we can beat them)!

Come on your beauties!!!

My expectations are not low. I am betting on us getting the 3 points.
I’d grudgingly take a draw.
It’s about time.

I love that you keep posting the comparisons between this season and last, it’s seriously fascinating to watch both visually and by the numbers!

Coining a new turn of phrase!

Not wishing to sound like too much of a prick (particularly since I really enjoy these articles, and I know I’m not a perfect writer myself) most weeks there are a number places where I stop and reread, or pick up on irritatingly poor grammar. I’ve no doubt it doesn’t bother most people, and as a science nerd I know how difficult it can be to translate numbers and stats into readable prose… but it does strike me that Arseblog is blessed by many great writers, why not designate an editor? Is the pressure to publish fast so great that… Read more »

Great analysis as usual!
What is the reason behind this fluency we are experiencing?
Is it Xhaka playing higher plus the RB (Cedric) playing higher?
Is it Laca instead of Auba?
Is it MØ new role?
Did MA unleashed the handbreak and the team is more attacking minded?
Is it the high press?
All of the above and some more?

big shout to Nicolas Jover then. his impact has been phenomenal!