Aston Villa 0-1 Arsenal: By the numbers

This will be a bit on the shorter side because I am on a holiday with the wife wine tasting but I also enjoyed this match and wanted to not leave this until Monday.

Aston Villa 0-1 Arsenal: By the graphics 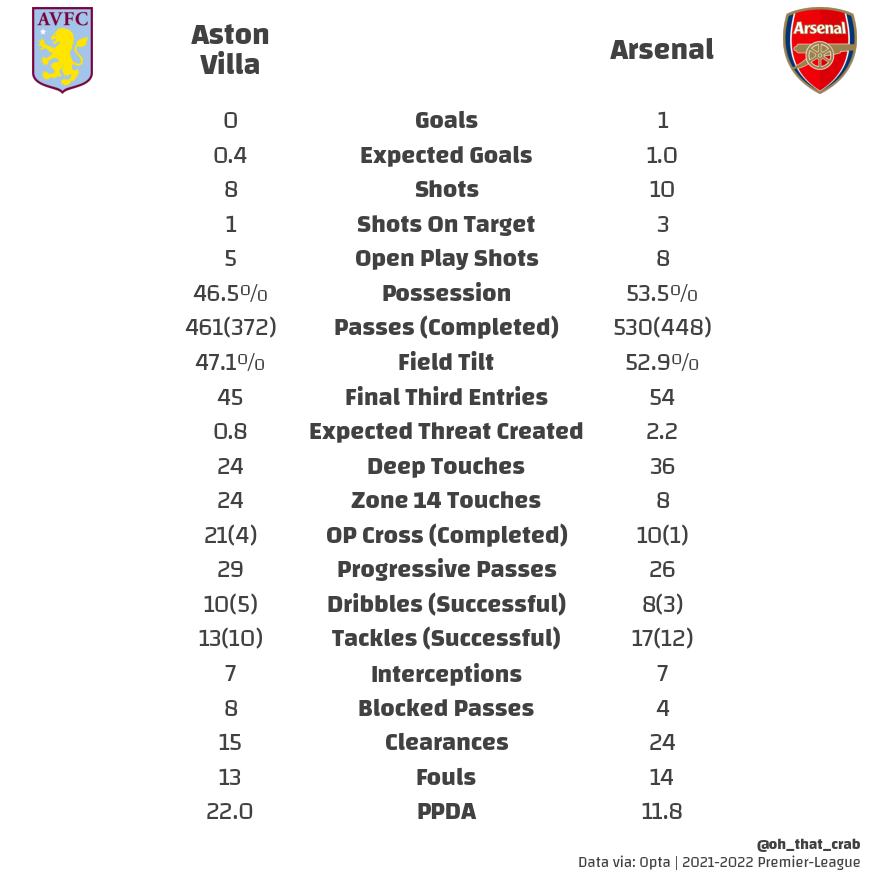 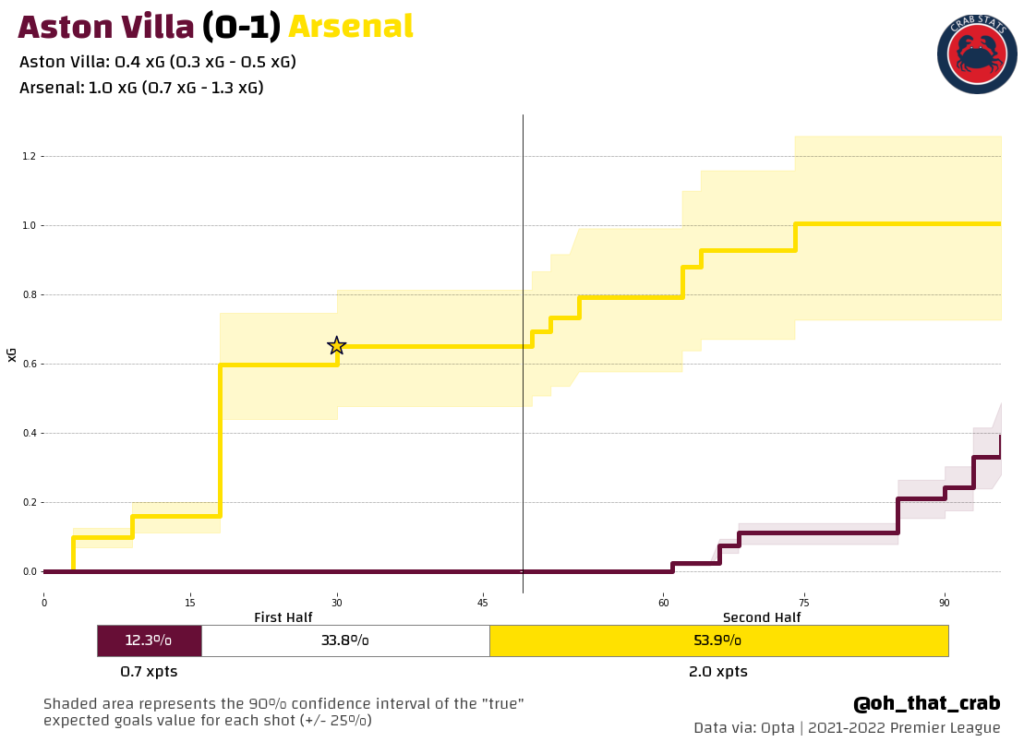 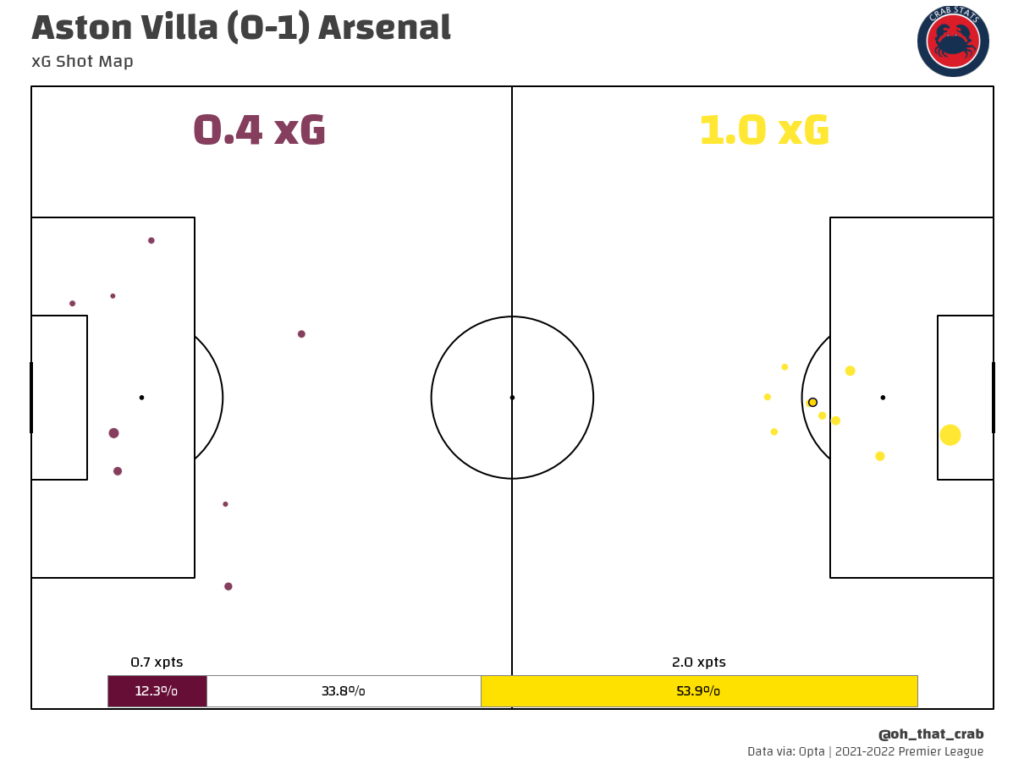 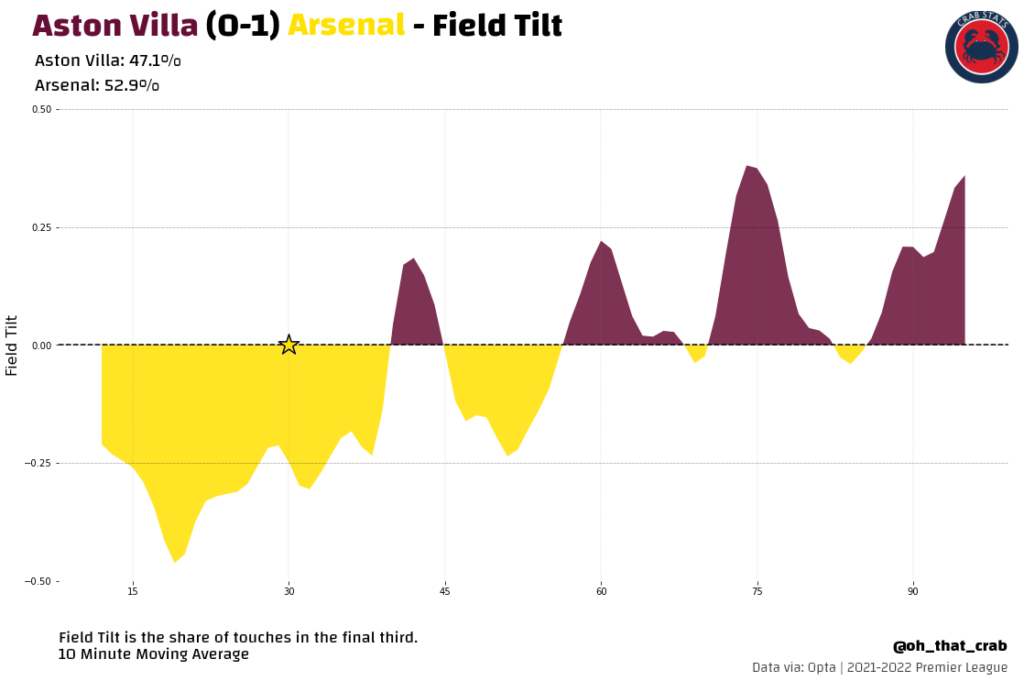 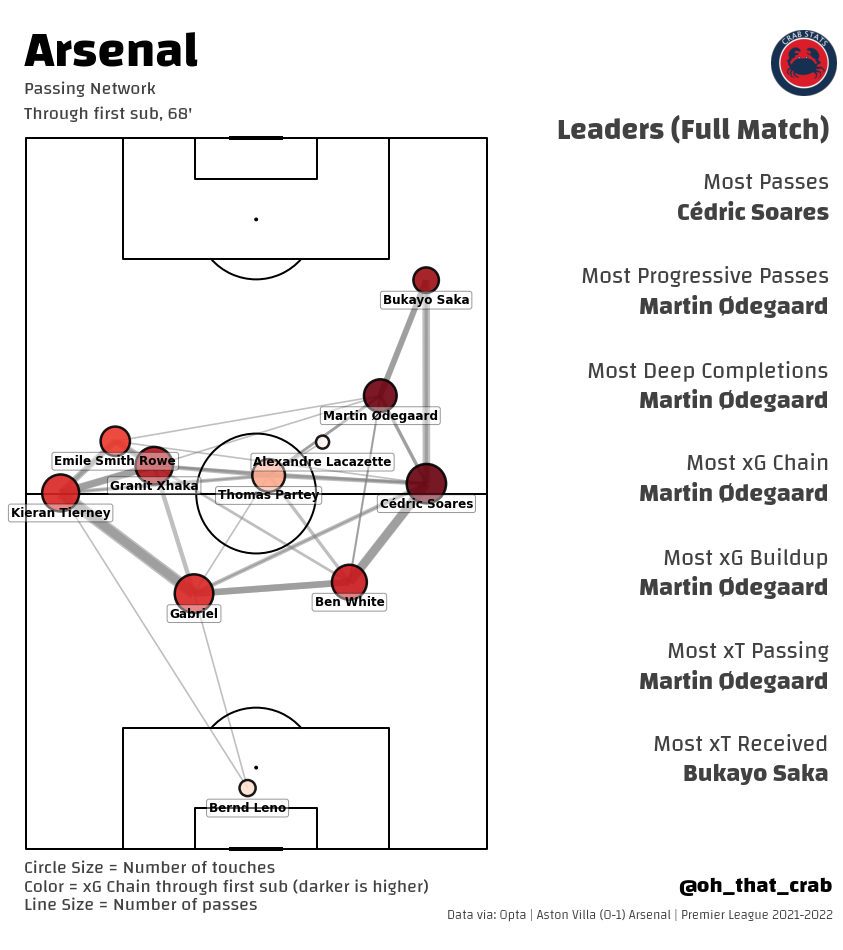 Aston Villa 0-1 Arsenal: By the numbers

7 – Shots by Arsenal in the first 60 minutes of this match.

0 – Shots by Aston Villa for the first 60 minutes of this match.

20 – Touches in the box for Arsenal in the first 60 minutes of this match.

After the fast turnaround from the Wednesday match, Arsenal seemed to want to start fast and try to score early before the fatigue of 3 matches in a week started showing on the legs. Arsenal jumped out on top of Aston Villa in this match with lots of pressure, almost all the ball, essentially all the threat, and eventually a goal.

8 – Shots by Aston Villa, the 10th time this season that Arsenal have held an opponent to 8 or fewer shots this season.

1 – Shot on target by Aston Villa, the shot that was essentially the last kick of the game.

7 – Times this season that Arsenal have held their opponent to 1 shot on target.

This was an impressive defensive performance from Arsenal, even when Villa started to get back into things at the end of the match, Arsenal did well to anticipate danger to where there was never a clear moment.

3 – Shots by Bukayo Saka, leading all players (tied with Smith Rowe). He scored the goal, set up a big chance for Smith Rowe, and ended with a combined expected goals and expected assists of 0.7. A great match considering that he spent a good portion of it being kicked.

100% – Martin Odegaard’s final third passing rate, leading all players. So good on the ball and it tight spaces, his connections with Saka and so good. He added 2 key passes in this match as well.

4 – Tackles by Cedric Soares, leading all players. I didn’t have the highest expectations for Cedric when it looked like he would need to step into the starting lineup but he has done well to help keep the Arsenal team ticking.

0 – Corner kick goals conceded. I was afraid after all the talk over the last week about Arsenal’s pristine corner record a jinx would happen but Arsenal did well to add another match without allowing a goal from a corner.

27 – Crosses faced by Arsenal. Aston Villa only completed 5 of those. For all the talk at the beginning of the year about Arsenal’s vulnerability to balls in the air on defense this has not been too much of an issue.

Thomas Partey has been so so good.

This match was another continuation of that. I would have to go back and check the exact timing but it would not surprise me that not long after giving his performances to date at Arsenal a 4 out of 10, this run of good form started. He looks comfortable in his role where he has a big responsibility of getting the team up the field and relishes the fight with the opposing midfielders when they are trying to get through Arsenal. The consistent run in the team after the niggling injuries, combined with a settled eleven around him seems to have done wonders for him. Long may it continue. 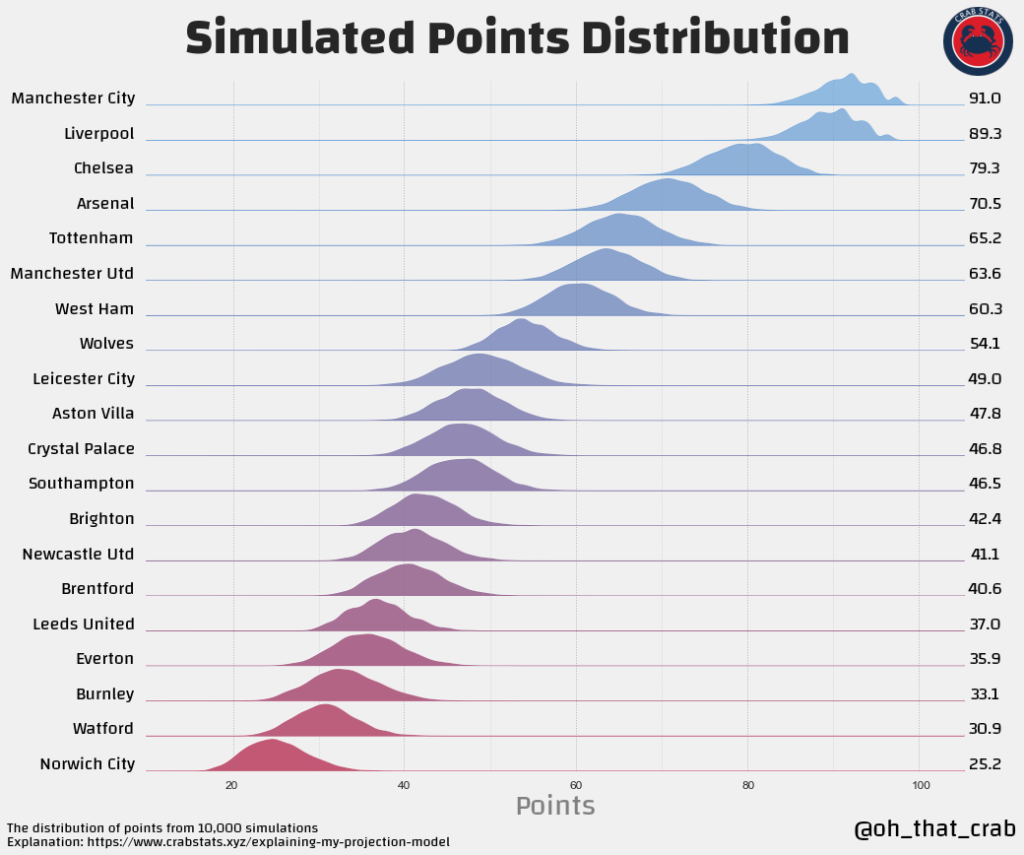 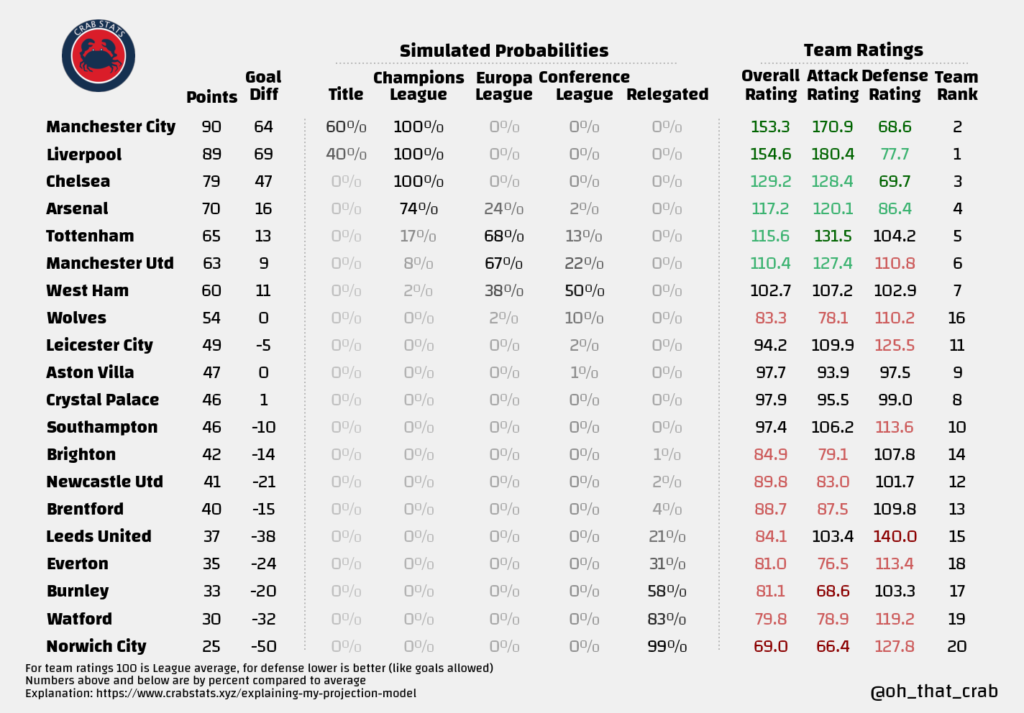 The match tomorrow between West Ham and Sp*rs will change stuff but Arsenal have guaranteed them ending another week in 4th place. They continue to be in pole position where they are not dependent on the other clubs and that feels good to say at this point of the season.

Sources: Opta via Whoscored, StatsZone App, my own database.

Previous articleArteta explains why injured Ramsdale made Villa trip
Next articleArteta on fans singing his name: Let’s be humble and keep improving

‘We are looking for diamonds’ Jonas Eidevall...

Independent football regulator on the horizon as...

Yeah…massive fucking result. This felt like a classic 2 dropped points from years past. But they fought in a tough atmosphere against a good team. Big credit to come away with 3 pts. Come on gunners – the final push now!

Don’t! The more the merrier.

Thanks, excellent analysis as always.
Feel free not to just taste the wine!

We’ve got 6 away games but 4 of those are in London. So we only have a short ride to Southampton and a plane ride to Newcastle left.

A Different George
Reply to  Steinn

Plus, for the match at Chelsea, we have a nice coach, but Chelsea will have to use the tube.

Just imagine Martinelli (understood he was ill) starts instead of Lacazette. The graph might look like 2 horns with Martinelli and Saka, and ESR shifting towards the middle ahead of Xhaka. We might get more shots from ESR and Odegaard and score our 2nd and 3rd goals.

And it’s sick to see Odegaard having all the Most numbers. He is getting better and better. Love him and the whole team. Great spirit.

I’d rather have ESR as a false 9

He has pace, drops deep, links up play, presses well, is good at finishing

Stellar delivery from Scott even on vacation. Thanks for the great work as always!

The correct answer is Chardonnay.

If Partey stays fit for the rest of the season, we get top four. I know that sounds simplistic, but I do think it comes down to that. He makes the rest of the team so much better. His form since AFCON has been unreal.

I was expecting “number of turns by Partey” in there somewhere😂

He executes the best dragbacks since… Kanu?

Odegaard is a very smart player, he’s learnt (or Arteta has coached) some good positional tweaks that really help our fluidity away from home

What is the reason behind this fluency we are experiencing?
Is it Xhaka playing higher plus the RB (Cedric) playing higher?
Is it Laca instead of Auba?
Is it MØ new role?
Did MA unleashed the handbreak and the team is more attacking minded?
Is it the high press?
All of the above and some more?

For me Partey is the difference. Adds to defence and attack.

Finally we have a big, strong and skilful player in midfield, see Gilberto, Vieria, Petit…

or someone secure on the ball in tight spaces, see Santi Cazorla

Yes, and getting Xhaka out of his way, and largely out of the build up. No more tortoise pace play.

Thomas Partey!! 💪🏾 0 times dispossessed, 0 times dribbled past! The definition of a defensive midfield master. Long may it continue! COYG!!

Look at that tiny little Laca dot.
Laca is terrible. The lengths some go to to excuse his miserable play is something. Would like to see Pepe or Martinelli given a chance there.
Huge upgrade awaiting the club in his role and Xhaka’s. Exciting, that.

Dactyl what has Xhaka done in recent weeks other then form a great partnership with Partey.

Pick of the stats for me:

7 – Times this season that Arsenal have held their opponent to 1 shot on target.

Just incredible how we’ve seemed to shore up things.

Love the work that goes into these. Much better informed that the MotD commentary and highlights which gets worse every day. The recent highlights just tries to manipulate the audience into thinking it was all Villa!