THE LOWDOWN
Arsenal travel to Germany on Thursday evening bidding to make their first Champions League semi-final since 2013. The scores are tied at 1-1 after last week’s first leg at Emirates Stadium. This tie will be held at Wolfsburg’s Volkswagen Arena, the club’s main stadium where the women’s team has not played since the 2013 Champions League semi-final against Arsenal.

Wolfsburg looked the more assured team in the first half an hour of the first leg and earned themselves a 1-0 lead through Tabea Wassmuth’s first half header. Thereafter, Arsenal slowly exerted territorial dominance and were well worth their 89th minute equaliser through centre-half and Stoke Newington local Lotte Wubben-Moy.

This leg will be a different affair with around 11,000 tickets sold at the time of writing. Wolfsburg are very experienced in this competition and they did not break a sweat this weekend, sweeping fourth placed Frankfurt aside 4-1 away from home. With a 4-0 lead at half-time, they were able to take their foot off the peddle for the second half.

Arsenal, meanwhile, did not have a game, their North London derby with Spurs was postponed due to covid cases in the Tottenham squad. Asked about the possibility of a postponement on Wednesday evening, Jonas Eidevall said, “Arsenal Women always wants to play football games.” They absolutely have the squad to take on two big games in a week too but, as it goes, they will have to try to use the extra rest to their advantage on Thursday evening. Nervous yet? You will be!

A WORD FROM THE BOSS
‘The reason I wanted Stina to come is because when I evaluated us against top European opposition, domestically or internationally, her running in behind was a dimension we missed and it made it difficult to solve some of those situations when we were being pressed.

LAST TIME OUT
The score from the first leg is 1-1 with Tabea Wassmuth giving Wolfsburg a 1-0 first half lead at the Emirates, Lotte Wubben-Moy scored a late equaliser. The last time the teams met competitively, Wolfsburg were 4-1 aggregate winners in the 2013 semi-finals.

THE OPPOSITION
Wolfsburg top the Bundesliga by a point ahead of Bayern Munich. They travelled to Frankfurt on Saturday lunchtime and made short work of their opponents, first half goals from Jill Roord (2), Pauline Bremer and Lena Lattwein gave them a comfortable cushion, before going on to win the game 4-1.

They had the liberty of resting Tabea Wassmuth and Alexandra Popp and were able to substitute Oberdorf, Hendrich and Lattwein well before the end of the game. The She Wolves went out at this stage of the competition last season to Chelsea and they will want to make amends against the only remaining WSL team in the competition.

PLAYER TO WATCH
On first look, to me at least, it looked like Stina Blackstenius had a quiet game during the first leg. Upon re-watching and analysing the match, it soon became apparent that her runs into the channels were a big part of why Wolfsburg had to call off the dogs with their early high pressure. On this occasion, Arsenal will need to establish that pattern a little more quickly.

They grew into the game and dominated it by the end but Wolfsburg already had a one goal lead by that point. If Arsenal allow Wolfsburg to score at home before they find their feet, the tie could get away from them. Blackstenius was a thorn in Wolfsburg’s side last week and she will aim to do so again on this occasion, only she will want to cap her performance in front of goal too. 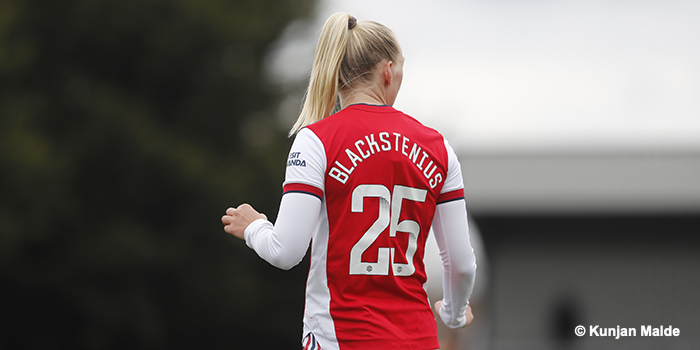 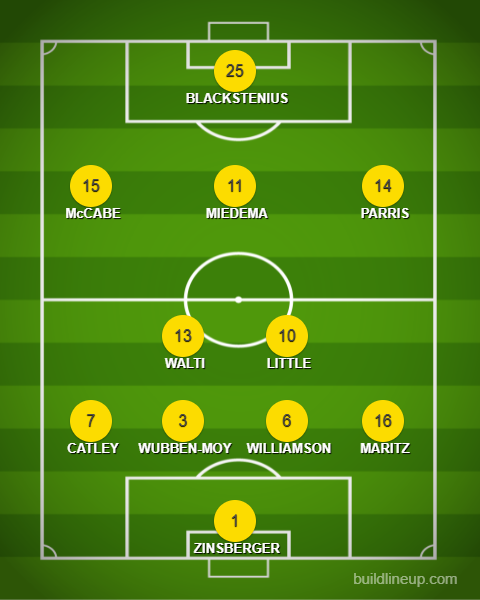 HOW TO CATCH THE GAME
The game takes place at Wolfsburg’s Volkswagen Arena on Thursday evening at 5.45pm UK time. The game will be shown live on DAZN’s YouTube channel, free of charge all over the world.

COMING UP
Arseblog News will be in Germany for the tie and we will bring you all the news from Jonas Eidevall’s post-match press conference on Thursday evening, as well as the MD-1 press conference too. We will have the usual post-match reaction video from inside the stadium too.

Again no Souza. The one player that’s needed more than Blackstenius is.

She might yet be passed fit to play, and I think it’s fair to say Wubben-Moy was a pretty decent replacement last week! I hope Foord is fit to play some part in the game, it’s a shame injury has put a stop to her strong run of form. It’d be nice to see Iwabuchi get some minutes too, though I think she may have to wait until next Sunday (fitness depending).

Agree Souza is a huge miss & that Stina has been brilliant so far but Little, Miedema and Williamson are our 3 most crucial players, in my humble opinion. Lotte is also an excellent “replacement” who of course scored a cracker in the 1st leg.

Foord’s potential absence would be doubly unfortunate given that Mead is suspended and she would have been my first choice to replace Beth in the starting XI.

Wolfsburg is just an hour away from where I live this year, what a stroke of luck! Just got a ticket, thank you for providing that link to buy!

The defending has to be top-notch- absolutely no room for concentration lapses and silly errors.

Mead will be a big miss, but if there is a game Parris can come to life, surely it has to be this?

Looking forward to this!

As an aside: I am not English, and not in England, but what kind of people typically read the DailyMail? Anybody cares to enlighten me?

The kinds of comments I see there on women-football-related topics are appalling. It’s becoming clearer to me why the likes of Barca, PSG, Juve can roll out big crowds for their women’s teams, whereas English sides struggle to even produce 10K in a big stadium. There seems to be an apathy for women’s football in England, no?

The Mail is the most right wing paper in England with the Sun. It’s mainly read by xenophobes. That said, there are plenty of those in England!

Aha! Now I get it. The comments I see on there are totally different from what I see on the Guardian.

What frustrates me is when football fans write off women’s football. My sister’s boyfriend, for example, is a massive Man United fan but has no interest at all in their women’s team. To me it just doesn’t make sense, if you like football why does it matter whether it’s men or women playing it?

It’s just something you struggle to wrap your head around!

I watched the Arsenal vs Chelsea FA Cup Final last year and we were all over the place at the back… And now having watched Williamson last week you can understand why, she’s genuinely phenomenal!

I though Tobin heath was really lively when she came one last week (even if the free kick was definitely a shot), so if she starts from the bench hopefully she can get on sooner and make a similar impact.

Talking of important players that we want to be at the top of their game, don’t forget Manu Zinsberger. There were some doubts when she was given a new contract, but she’s been excellent this season. With all the best teams, the back line has confidence in the keeper, and vice versa.