Oleksandr Zinchenko – By the numbers

Arsenal have completed their fifth signing of the transfer window and second signing from the current champions with the signing of Oleksandr Zinchenko.

Like Gabriel Jesus he should not be an unknown player to most Arsenal fans but his role and minutes distribution for Manchester City make him an interesting player to think about and analyze. 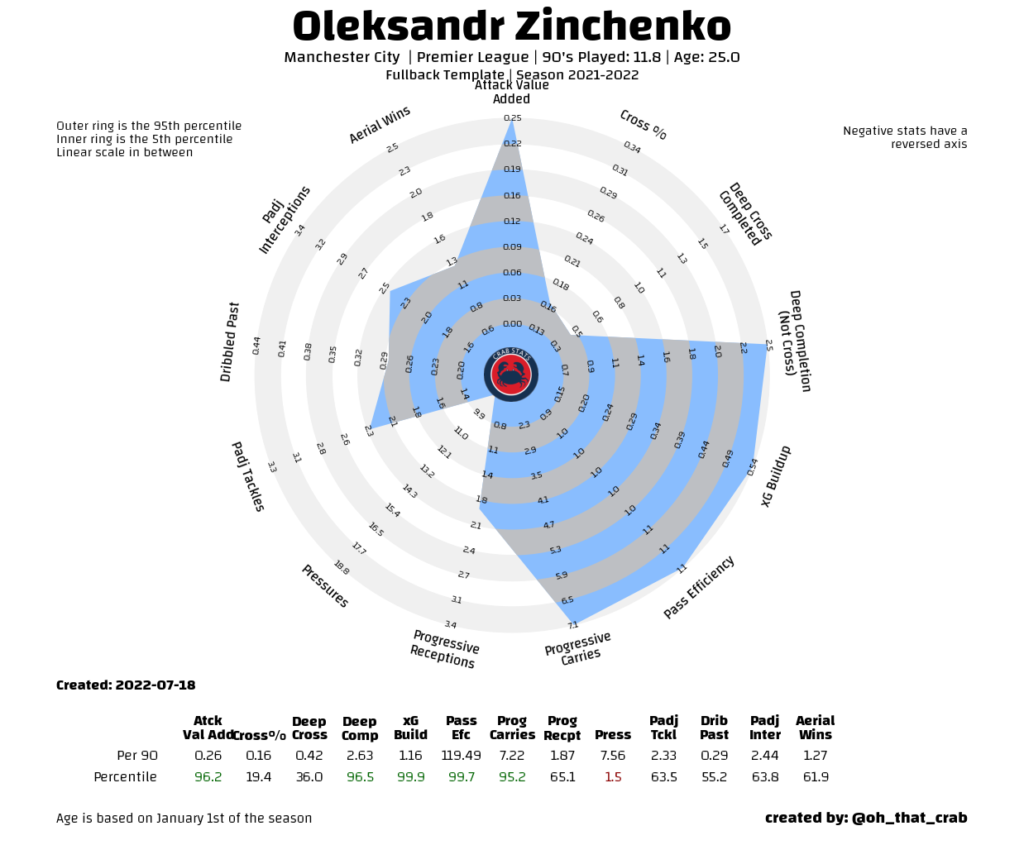 For the stats that follow I have included his rank against both Fullbacks and Midfielders in Europe’s Top-5 Leagues going back to the 2017-18 season. 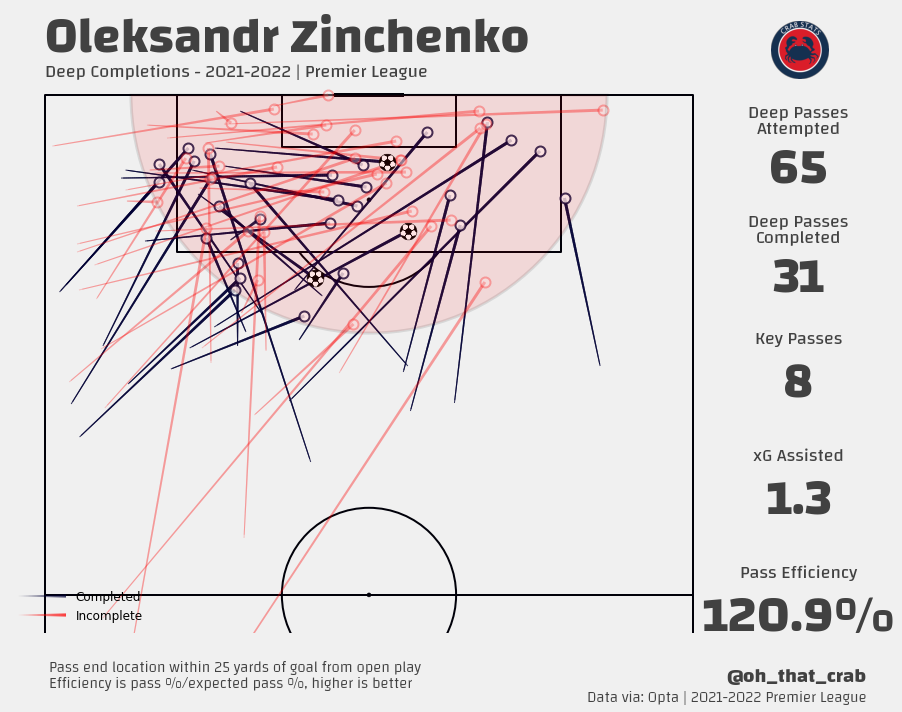 One of the things that really jumps out you is that Zinchenko is an amazing passer. Part of that is that this Manchester City team are on another level but I think that he also comes in is a match for some of the other brilliant players on the ball.

His ability to add additional technical security to the squad is one of the most exciting parts of this move.One of the things that I commented on in the Fabio Vieira post was that it seemed like Arsenal were trying to bring back diminutive player maker FC, I think that this signing is another example of the club looking to increase the technical security of the squad.

For a player that lines up as a defender, doing the actual defending is one of his bigger question marks. His stats come out looking decent, especially when a possession adjustment is added to account for the fewer opportunities that a player at Manchester City would have given how much of the ball that they have.

However, from watching video of him this is still a major weakness for him. The most worrying is when he is one on one with an attacker he really struggles to limit them from accomplishing their next action.

For Arsenal, I expect that he will play more often but I do think that there is the potential for some mixing and matching between him and Tierney based on the situation, the team faced and what Arsenal are looking to accomplish.

I am not a tactical expert (you’ll have to turn to the other Arseblog writers for that) but I see Arteta leaning towards wanting a 5-3-2 type attacking formation when established in the final third. Both Zinchenko and Tierney can operate in the wide channel as part of the five across but the stats and video suggest that Zinchenko would be much more comfortable as an inverted fullback operating as part of the three supporting the attackers.

This is his primary role with Ukraine where he has played primarily as an 8 and some of the conversations seem to point to something that is possible with Arsenal as well. At City he received that ball in the zones that aren’t that unusual for a fullback but venture into the halfspaces. 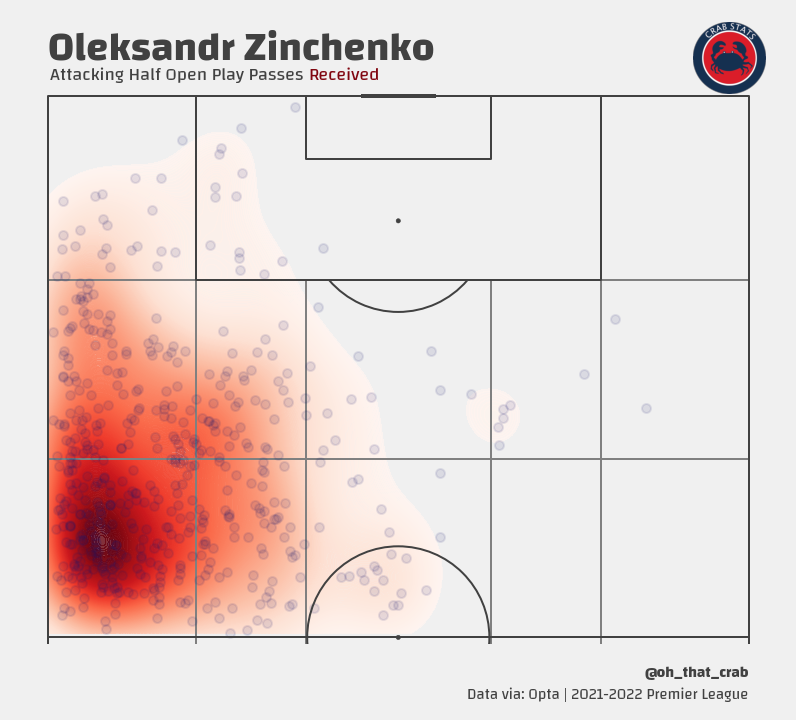 When he did get into those more central locations this is where he created a lot of his threat, especially looking to switch the ball over or behind the two banks of four that City face regularly.

Overall, he is a player that has shown amazing promise in limited opportunities. There are questions about his defending, especially one on one against elite wingers but still a player that I think can add something unique to this Arsenal team. 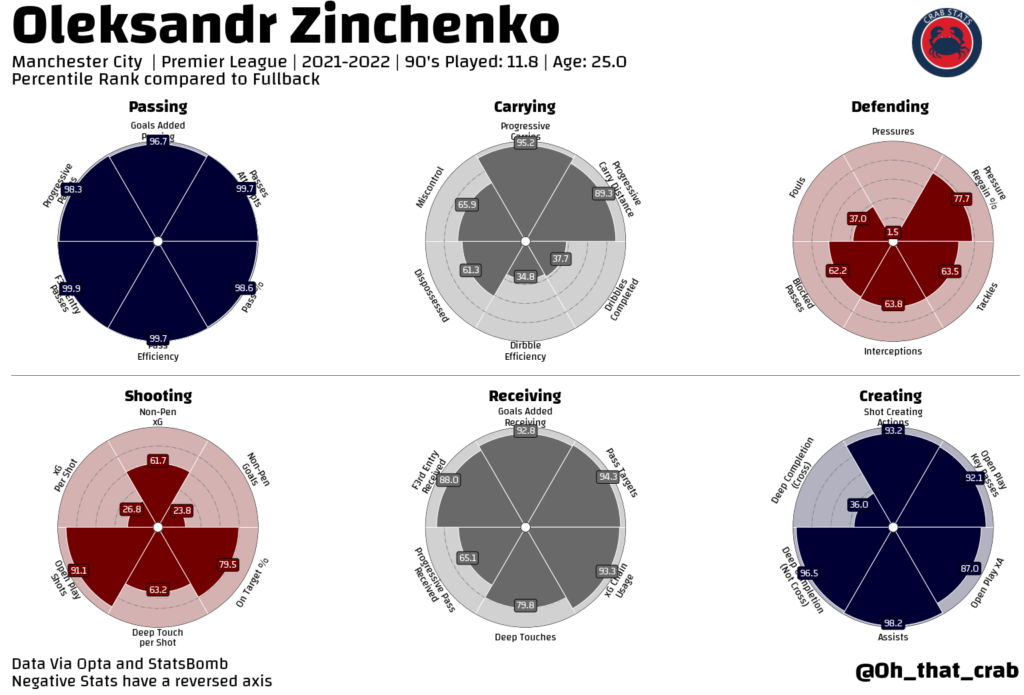 Sources: Opta via whoscored, my own database, Statsbomb via FBRef

Previous articleZinchenko: I was a massive Arsenal fan as a kid
Next articleArteta: There are still things we’d like to do

Arteta on January: Where we are demands...

And he loves Arsenal as a fan, think he can be great for us as he comes into his peak years.

Those passing stats are insanely good!

I’m hoping he’s the left 8, filling in at FB when Tierney’s out.

I’m thinking he’s the starter at lb. Tierney can’t stay fit. I don’t think they tried to buy Martinez to back up gabriel, you would have to think he was going to play left back.

KTs commitment and attitude is remarkable but I honestly think OZ will be better on what MA is trying to build. Also I am still hoping for YT in order to lift the transfer window trophy!

Not sure I recognise some of those US states you mention

Ozio is lovely this time of year.

I don’t see it that way myself. You look at our best 11 from last season’s squad & the 2 positions you would most want to upgrade were Laca & Xhaka. I think that’s both done now…..and having Xhaka to come in to replace Zinchenko when you do need him at LB is not a bad option at all. (Xhaka is nowhere near as bad as his biggest critics say, but I don’t think he should be a first 11 player) I honestly don’t think Zinchenko is a better LB than KT either (injuries aside) but given how bad our… Read more »

I like Tierney, not sure arteta does. Then there’s the problem of him staying fit. It’s very obvious what arteta’s trying to do at this stage, and a conventional lb for want of a better word doesn’t seem to be part of his plan. If he was convinced by Tierney it makes the pursuit of Martinez and the purchase of zinchenko strange. If he is going to play Tierney why not keep nuno and coach him up? I think neither of them are what he wants at that position.

Maybe you’re right…..I don’t know to be honest, i would juat be surprised. I think the answer to your Nuno question might be fairly simple though 😀

Agree about nuno, but there’s a good player there if he can be coached up a bit. Going after Martinez and zinchenko is a bit like ramsdale last year is what I was trying to say. I thought we had other positions we needed last year over goalkeeper, same this year with lb. I thought we would be buying a cheaper option to cover for Tierney.

You might be forgetting Tierney’s injury record and Tavares’ less-dependability. I think when you consider those factors (+ versatility), it shouldn’t be that difficult to see why Arteta is going after Martinez and now have Zinchenko

Tierney, Tavares, Gabriel, Mari, Zinchenko, Xhaka, Vieira, Ødegaard, Pepe and Saka are all left footers!
If Petr Cech were still here, we could comfortably field a team of left footers!

So different from the Lionesses who have lined up with only one.

Thanks for this! I can help but wonder if his FB stats make him a starter, at least in some situations, over KT. Ditto, he may be a starter over Xhaka in other situations. Possibly more the latter. The only advantages Xhaka has that I can think of are physicality and team knowledge. But that’s totally non-stats based.

Note: I am far from a Xkala hater.

Although his stats for defending aren’t the best for a defender. I can see him doing a decent job as the mythical left sided 8, especially against strong teams. His passing and ball retention are great, add that to his decent defending instincts and he would be solid in this position. Against low ball defending teams, I can see Vieira/Ode being used here also freeing up the 10 spot for Smith-Rowe or Saka. With this extra killer ball instinct in attack, we should be able to break down these defenses much easier. What I am excited about most will be… Read more »

Pardon my ignorance, but can someone elaborate what position is this exactly: Zinchenko would be much more comfortable as an inverted fullback operating as part of the three supporting the attackers

Lol. It’s more gobbledygook inverting the pyramid bullshit…basically Arteta wants to play 4-3-3…this dude will either play at lb or left mid. Easy.

Basically, a left back who pushes forward and inside, into the position usually occupied by a defensive left-side midfielder (like Xhaka) when we are attacking, rather than the traditional winger who pushes high and wide like Tierney.

Guardiola started using inverted full backs to great effect at Bayern with Lahm and Kimmich, which allowed him to play more creative central midfielders who could push further up the pitch in more attacking formations as their position was covered by the full backs.

Quite sure KT is being demoted here with the arrival of zinchenko. Not for a lack of talent and effort but injuries. We can’t build a team around an injury prone player.

Tierney has become very predictable lately, and isn’t that great at defending. He needs to stay fit and up his game.

Disagree. We have Europe this season in addition to higher expectations overall and were in need of decent LB cover. We’re gradually building up our squad to have serious competition for every position, exactly as we should. I believe KT is still number one choice but that doesn’t mean he should have to play every single game (most players start to become injury-prone when asked to do this). Healthy rotation is something we’ve been lacking for a long long time.

Hi Scott – can you refresh my memory on the possession adjust stats (tackles and interceptions). Is that when you divide the number of each by the amount of time the other team is in possession, instead of by 90 minutes?

So how I do it is literally by the number of possessions a player is with and faces. I then adjusted that to the average for a premier League team

I guess doing it that way solves for the case where one team – like City – has say 70% possession so their defenders have fewer opportunities to intercept and tackle because the other team just doesn’t have the ball as much.

Tierney is very brittle, and you can’t count on him to play the entire season, no matter how much we love him.
Art and Edu made a wise decision by appointing Zin.

Is he brittle because he wears short sleeved shirts when he trains in snowy weather🥶.😆